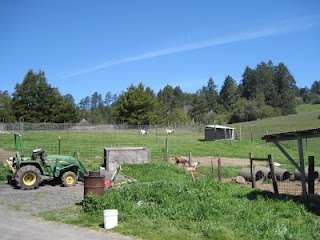 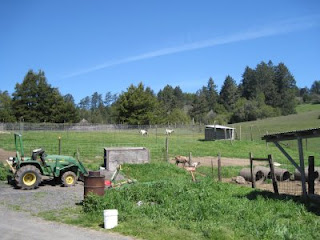 oing over a bridge (say, the red one), driving an hour, getting on windy roads and following them to the ocean or almost.

Last Friday I visited three farms in a day for my May article on agritourism: Bodega Goat Ranch, Devil’s Gulch Ranch and Green Gulch Farm. At the end of the day and after much driving, I was glad to be back … and glad I brought a cooler along.

From her house on top of a hill, Ms. Karlin has a 360 degree view on green rolling hills outside the hamlet of Bodega, solar panels for ele 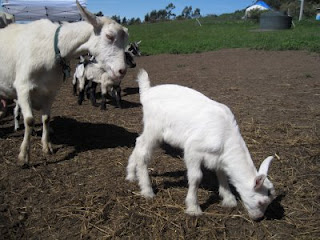 ctricity and water-heating on her rooftop, water reservoirs up the hill to catch rainfall and irrigate, goats roaming free in enclosed pens down the hill for the cheese-making operation, a vegetable garden for a balanced diet, a chicken coop for eggs, and fields awaiting to be planted with tagasaste (protein-rich shrubs) to feed the goats.

Ms. Karlin started in 1985 with a hot plate and a 5-gallon bucket. Her father-in-law had seen an ad in the paper saying “Herd for sale.” He knew about goats, bought the herd and the clientele along: 4 clients who received goat cheese shipped by UPS once a week.

Through the years, Ms. Karlin travelled the world to learn and then teach about 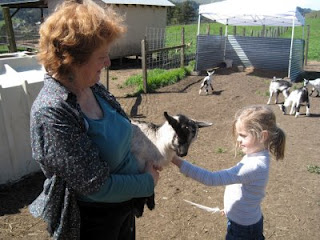 the benefits of raising goats for communities. From the International Year of the Goat hosted by CATIE – a scientific knowledge and research center in Costa Rica that I see similar to my father’s IBSRAM on soil management – to a farming project on the islands of Amantani on Lake Titicaca between Peru and Bolivia, Ms. Karlin travelled far. She even taught cheese-making to the Maasai in Kenya.

“Goats lend themselves to small-scale projects,” she said, adding that they “require less pasture space than cows, are a great protein source and can be handled easily by women and children.”

Back on the Sonoma Coast, she sells her chees 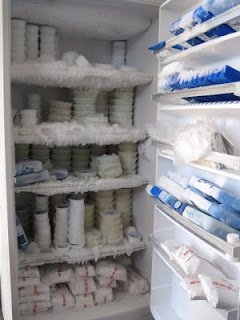 e at the Marin Farmers Market, to local restaurants (such as the Bluewater Bistro or Rocker Oysterfeller‘s) and she offers private tours of her ranch followed by a cheese tasting.

If only for the cheese tasting (and Yelp.com’s rave reviews), it’s well worth the drive. Her Charolais, a French style aged pyramid with a nutty aftertaste, is divine and her crema has a delicious goaty taste. All this reminded me of a French goat farm in Bize-Minervois I visited last year (although Combebelles was way more rustic).

Ms. Karlin showed us one of her not-so-secret hideouts for frozen cheeses: a big freezer (about to be cleaned) piled top to bottom with round containers of goat cheese, some plain, some flavored, all good. Yes goat cheese can be frozen, but only if you do it right after the cheese is made. Ms. Karlin also vacuum-packs her cheeses.

With her 30 moms, 60 babies and 2 males, she owns has a nice little goat farm that yields 120 pounds of cheese 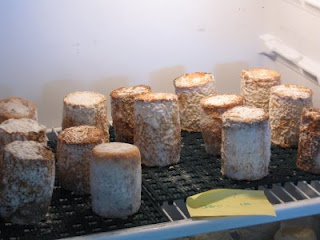 every week 10 months a(moms nurse their babies 2 months out of the year).

If you live in the Peninsula and Sonoma Coast is not an option, you can also visit Dee Harley’s Harley Farms Goat Dairy in Pescadero. Ms. Harley bought a male called Romeo from Ms. Karlin recently. It’s a small goat world after all.