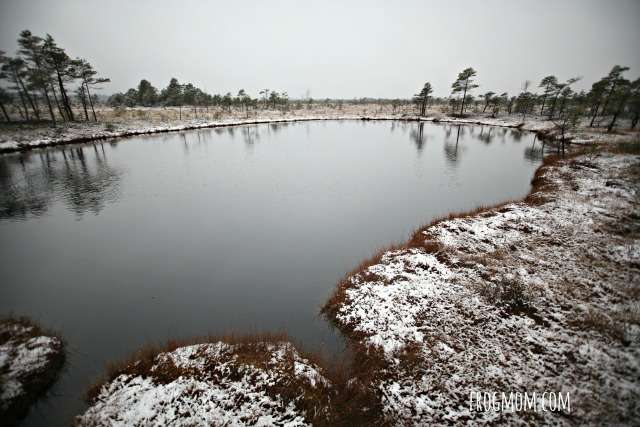 In the middle of Estonia, Soomaa National Park is as adventurous a landscape to navigate as it is unique and beautiful. A raised bog growing 8 meters above ground, Soomaa National Park is a crazy flooded landscape that we decided to explore with the help of a guide, looking forward to discovering remote places in the park before canoeing back to our starting point. This was one of two national parks we explored in Estonia, the other one being Laheema National Park.

Algis from Soomaa.com met us in the morning with snowshoes (we needed them not to sink) and we set off from a cozy log cabin under the first snowfall of the year in late October. It was lunar, eerie and oh-so-strange to be walking on water through a landscape with very few pointers as to directions for the untrained eye. If you are looking for a wild and rare nature experience, this is a great day out with kids. 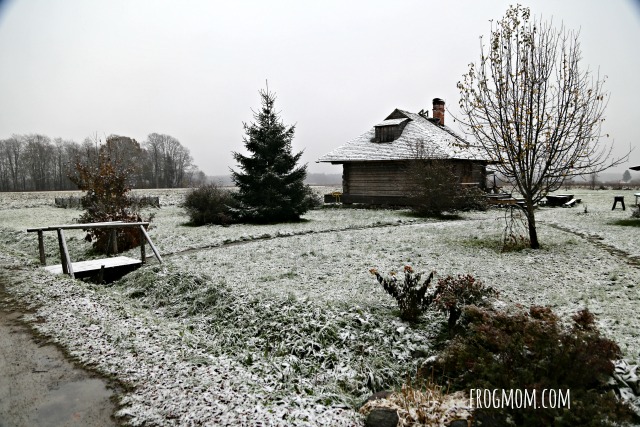 We woke up in a little log cabin at the edge of the park with thick snowflakes falling sideways and covering the ground. Though we had hoped that it would snow, snow is never a certainty this early in the year and it was wonderful having breakfast at the rustic wooden table, looking out on the outside hot tub and barbecue becoming whiter and whiter.

After breakfast, Algis, our guide for the day, shoed up in his van with rubber boots and snow shoes in the trunk. Given the weather, he decided that we would be better off with snowshoes. We all grabbed a pair and started walking. We followed the road for a bit, then crossed a field (where a wolf was spotted a few years ago) and then had to watch for branches as we bushwhacked through a pine forest. The ground was mossy and bouncy, feeling like a thick carpet after the bath overflowed. 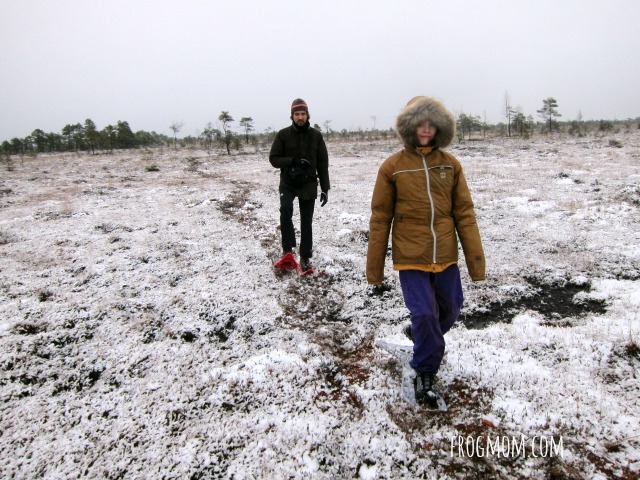 When Algis said that we should put on the snowshoes, we still couldn’t “see” the bog. Somewhere in my imagination, I had thought that Soomaa National Park’s bog would start with a big sign saying BOG and that the landscape would change dramatically. The truth is, the bog had gradually encroached on the landscape. Pine trees had become fewer and far between as well as smaller in size. In front of us, a vast flat expanse opened up, with a few trees in the distance and nothing to cut the view in between. Bogshoeing came very naturally as it was just walking with snowshoes, but at the beginning it was tiring. My girls complained that it was hard work and indeed, we were soon all sweating despite the snow fall. 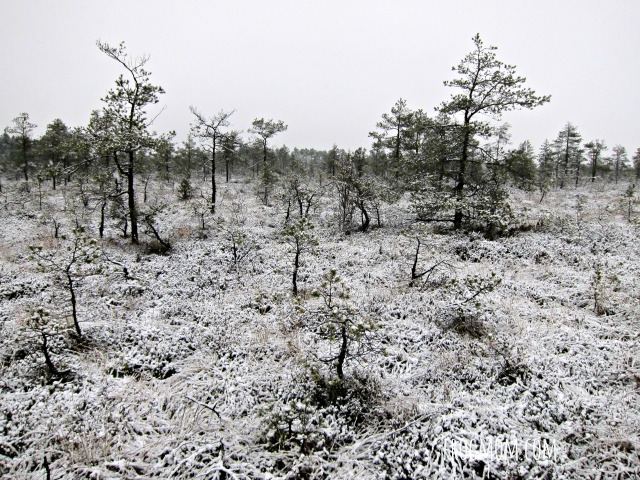 What makes Soomaa National Park unique is the flora that grows there. If I understood Algis’ explanation correctly, the bog is a living organism that grows at the rate of 1mm per year, which explains why it’s 8 meters above ground (do your math, it’s very old). It’s also surrounded and mixed with peatland forests, which explains why the flooded bog doesn’t suddenly dry out and stays a wetland year-round. Peat acts as waterproofing barrier. 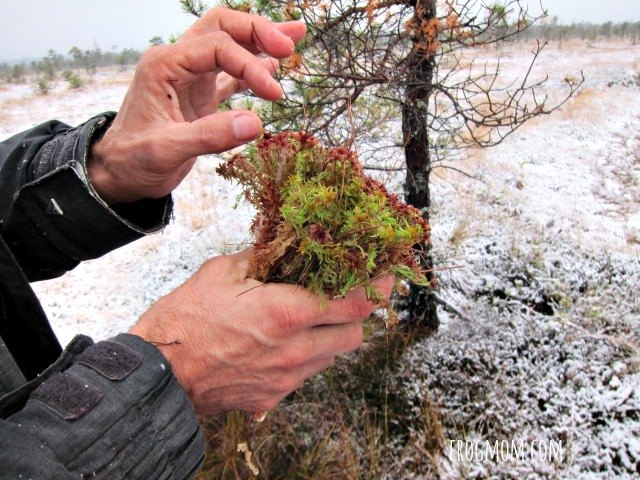 Because of the harsh conditions, very few plant species can survive in the bog and many of them are protected. Obviously, Soomaa being a bog, it was moss heaven and indeed, we’d been walking on moss from the beginning. To us, moss looked like moss but to Algis, there were lots of different species of moss in front of us. The park also counted sword lilies, Siberian irises, meadow gladiolus or stonecrops.

Soomaa is even host to a species of Daphne whose red berries are very poisonous to humans. As soon as Algis told us about the toxic plant, we all looked at the landscape with a lot more respect, wondering if we would be able to recognize it (the answer is no). On the upside, bogs are natural cranberry habitats and Soomaa is no stranger to traditional bog berries. To our amazement, Algis mentioned that his neighbor harvests up to 500 kg of cranberries in the bog every year. Blimey, that’s a lot of cranberry sauce! Of course, Algis, his neighbor and all other Estonians are professional foragers at heart.

Winter Wild Swimming in a Lake at Soomaa National Park 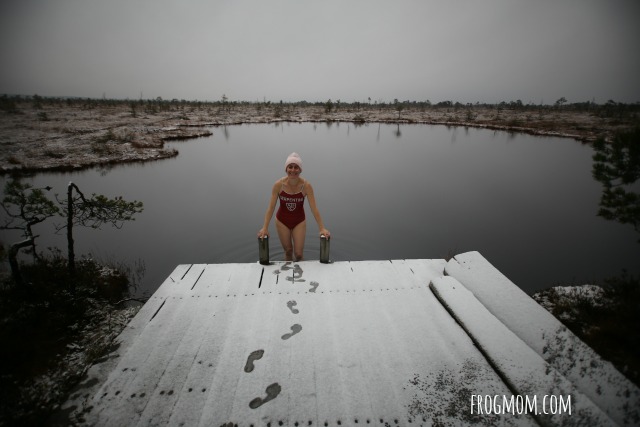 It may come as a surprise, but bogs have lakes. When Algis mentioned that people swim in these lakes in the summer from swimming pontoons, I knew I had been right to pack my swim gear. At the first lake with a swimming ladder, I asked to stop for a swim. Unfazed, Algis said yes, and yet we were surrounded by snow in bitter cold. No wonder, Algis’ sister is a hardened Estonian winter swimmer! Good thing I like very cold swimming too.

As soon as I stepped on the ladder, it felt slightly slippery so I swam right in. Without goggles, all I could see was darkness under me and yet, when I turned around in the middle of the lake and looked at my legs, they were blood red. The water was red! There must have been a mineral (iron?) or type of vegetation that turned the water red but as a swimmer, this was unsettling. Though Algis had said that the lake was very deep, I kept my feet way toward the surface and slowly made my way back. What a wonderful place to swim. Definitely a unique experience. 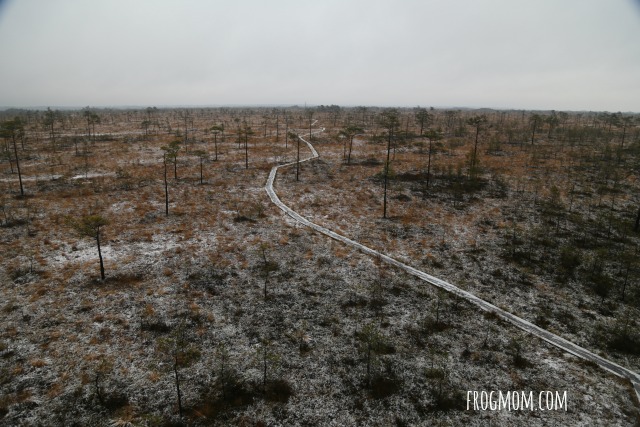 After the lake, we hiked on wooden boardwalks, which made for much faster progress but also for a few slippery moments as snow was turning to slush. Within minutes, we reached a tall metal watchtower and climbed to the viewing platform for a bird’s eye view of the park. It looked so vast!

Now at the edge of the bog, we went down a series of wooden steps and came out of the park just in time for lunch. 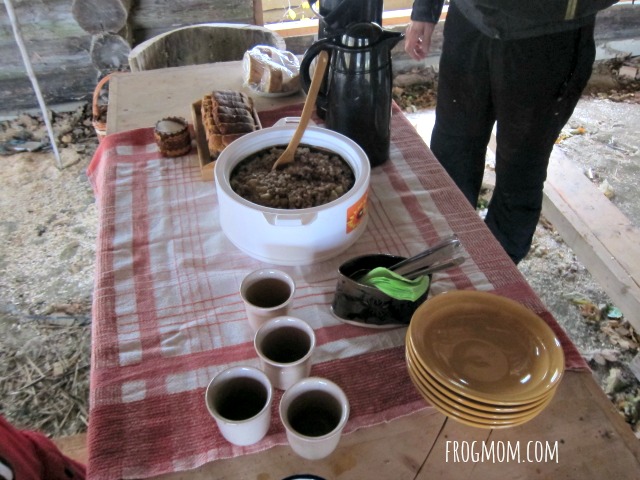 I’ve been on outdoor guided excursions where lunch was tomato paste in a tube, oat cakes and cheddar. Now, at the edge of Soomaa, Algis pulled all the stops and laid out a full traditional Estonian feast on a makeshift table for us. This was a house under construction with a roof but no windows or doors. Algis had stopped in the morning to hide a wicker basket in the house and as our stomachs grumbled, he offered Estonian herbal tea (a local mint variety), before laying out a nice tablecloth and a slow cooker filled with a steaming stew of barley, potatoes and lard. This was heaven!

I’ve never seen such a nice lunch on a day out and we were all seriously impressed, as well as appreciative as the food was excellent. Note: real china plates, stainless steel cutlery and napkins. Yes, Estonia does picnic lunches in style! Lunch ended on a sweet note with a rolled chocolate cream cake but after two bowls of hearty stew, our appetite was somewhat eroded. My, was it time to go out and canoe back to the log cabin. 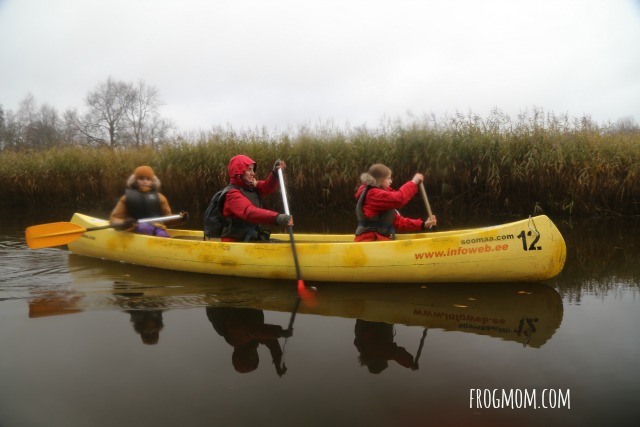 From the launching point to the log cabin in Riisa, we paddled along 8 km of tranquil waters on the Raunda River before it merged into the Halliste River. With little current and low water, we paddled carefully, trying to avoid as best we could masses of reeds or submerged rocks.

Algis entertained us with tales of Soomaa National Park’s “fifth” season, the season when all the area is flooded to the extent that you can canoe in the forest and between flooded houses. When heavy rains start at the beginning of the fifth season, the river rises at the amazing rate of 2cm per hour (1 1/8 inch). It’s crazy! I’d like to see that, to be fair.

After two hours, we reached our destination and thanked Algis for his explanations on the park and on Estonia. Between the log cabin (with sauna), the warm barley lunch and the bog/canoe adventure, my girls really enjoyed this day but said that it might be too difficult for kids under 10.