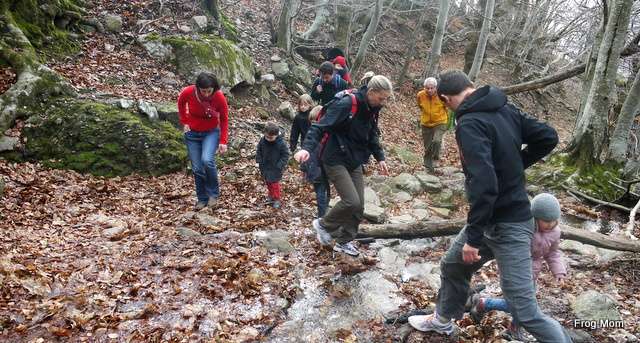 > Southern France Ramble with Children at the Gorges d’Heric

Southern France Ramble with Children at the Gorges d’Heric

Carved in the Languedoc backcountry, the Gorges d’Heric are a favorite hike of our family. For my girls, this trail rhymes with baskets full of sweet chestnuts, a path snaking under steep granite cliffs, swimming holes in the warm season, and a drink as a reward in a tiny hamlet with only ten houses and five inhabitants. Heric is the name of the hamlet, a name that means “chestnut hull” in Occitan – the local language derived from Roman. It’s a well-chosen name since most of these rugged hills have been  terraced with dry stone walls over the centuries for sweet chestnut farming.

To revisit these gorges – that I’ve hiked countless times since I was a kid and my father before me in his youth – I joined a group of friends with their children for an active winter hike. Starting from the parking lot of Verdier in Mons-la-Trivalle, we walked 3.5 miles to the hamlet of Heric and pushed another 2 miles to the pass of Airole, totaling 2,300 feet of healthy ascent and gleeful descent on the way back.

Starting at 11 am, our goal was to reach a picnic spot by the river by noon or so. Fortunately, the walking is relatively easy while the path follows the river and offers many occasions to ooh and aah over the crystal-clear swimming holes. When you learn about the local history, it’s even better. An old donkey trail was replaced by a paved track in 1932 and became today’s path. The winding road  features four stone bridges crossing the gorges, passing places with wonderfully evocative names such as the Sighing Bridge leading to the Watchmen Trail or the Cherry Tree Abyss whose deep waters invite thrill-seekers to dive off surrounding granite walls into chilly waters. Sounds like a picture book, doesn’t it?

Once the road leaves the river, the walking gets a lot steeper and by the time you reach the hamlet you’re dying of thirst and ready to place your order for drinks. Good thing the 3.5-mile mark coincides with an open air cafe where an old lady serves drinks year round. Despite the mileage, the grade and the steepness, this is a typical family hike in the area and most  groups, like ours, feature all ages from babes to seniors. Ours included a 9-month old infant, two preschoolers aged 2 and 5, a bunch of school-age kids between 6 and 10, and adults up til my 72-year old dad.

Til we reached the cafe, we needed to find a good picnic place. In the summer most people stake their claims with picnic blankets and beach towels by swimming holes. In the winter, swimming was far from everybody’s mind but skipping rocks and bouldering wasn’t. Down a small hill, the kids found a flat stretch of pebbles by the river. Pebbles! Boulders! Narrow passagesways! Now that called for action and before we knew it, all children had evaporated in the land of exploration with sticks in hand. Our ham sandwiches didn’t lure them back to lunch during a long while but we had a strong case for us, with a promise of chocolate and clementines. Eventually they all came back and had lunch while I considered a swim.

Too bad that the river was so shallow where we were. A friend pointed that a hundred feet upstream I’d find deeper pockets of water. I dipped a finger in the water and it felt cold but not awful cold. Less than 10C/50F, more than 5C/40F? I discretely ventured away from the group and changed into my swimsuit when I heard a young voice behind me, “You’re going swimming?” To confirm that certain adults have lost their mind, I stepped into the water. Brrr, very refreshing. I expected tingling sensations in my toes but it was fine. The challenge was that the pebbles weren’t too comfortable to walk on with bare feet and most were slippery with moss. I treaded carefully, mostly with water up to my knees and walked in the middle of the river until finally the river bed dropped, the water looked darker and I couldn’t see my feet. Splash time! It felt great, I so love cold water.

Dried up, I realized our group was all packed up. Ready for warm drinks at the cafe in Heric? The last mile of the walk is a series of laces up the mountains in a chestnut forest. My 9-year old started picking up sweet chestnuts in her basket and soon, three other children joined her efforts and brought back handfuls of the shiny nuts which my daughter dutifully inspected for tiny holes – for holes mean worms and worms mean a good toss. Slowly the chestnut heap grew and the bottom of the basket disappeared under the sweet treasure. On the same chestnut theme, one of the boys made a chestnut sword skewering chestnut hulls and moss on a stick. Playing along the steepest part of the path, the children all made it up to the hamlet where they all claimed their reward – cups of warm chocolate!

Sitting on the tiny hamlet plaza, I noticed a few trail signs and got up to read them. Blimey, if we only pushed another two miles we could reach a pass! Though it was already 2pm, I polled the others. The kids didn’t show any signs of tiredness, why not? And so we embarked on the second leg of our hike which started off on a scramble up a rocky hill. If we thought we’d seen steep before, we were wrong. Now this was steep and we held on to tree roots and branches to push the children up the slope and reach a narrow path zigzagging up the mountain.

No more wide paved road, this was the real thing though the rocky walls showed this was another of these centennial paths used by mountain farmers to access their sweet chestnut groves. We were deep in chestnut tree territory. What an abundance of chestnuts on the forest floor! Needless to say, the chestnut loot grew by leaps and bounds and the children barely noticed they were going up a nicely-sized mountain. Along with chestnuts this path presented a fair number of streams that occasionally made the walking quite soggy. And the wind, that furious wind! It came in intense blows that made us bow our heads to protect our eyes from flying leaves and specks. I think it’s the wind that got us. After a mile, the smallest children turned back. Seven of us went on but again, the wind was relentless and the thick leaf cover made the walking treacherous in places because we couldn’t see big rocks on the path. Roughly half a mile from the pass, the last children turned around.

Only my husband and I kept going, only we doubled the pace because we didn’t want to hold up anyone. It took us roughly 20 minutes to reach the pass. Finally the trees gave way to thick bushes of heather and rosemary and we made for the pass. A weathered wooden sign said “Sentier de l’Ayrole numero 22, Heric 50 mn”. What a view on the valley below! Dark clouds and a descending winter sun made the mountain ranges look like a shadow theater scene, each sharp ridge fading in the distance. We snapped a few shots, more battered by the wind than ever and ran down the mountain to catch up with the group.

If you ever go to the Gorges d’Heric, I highly recommend you try to reach the pass. Not only will you get a bird’s eye view on this splendid landscape, but you will surely leave the crowds behind as few people venture further than the hamlet of Heric. Happy trails!