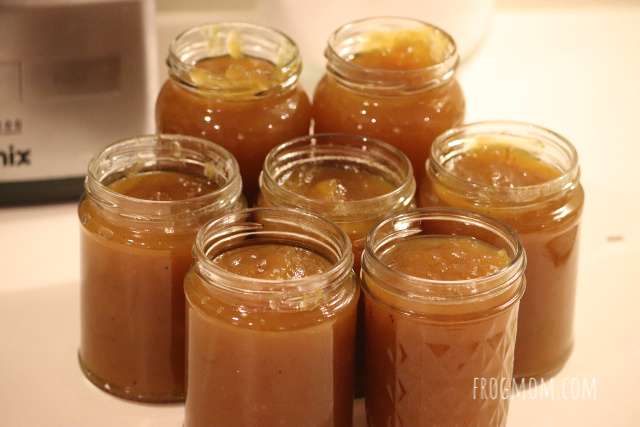 Cooking with pumpkins is a daunting task for many. What do you do with pumpkins? Before I moved to San Francisco in 2001, pumpkins were good for only one dish – pumpkin soup. I knew no other use for pumpkins. In California, I discovered how versatile pumpkins can be and I have my friend Suzanne Collins to thank for this wonderful spiced pumpkin jam recipe. Without her, I would never have dared turn pumpkin into jam but once I tasted it, there was no going back. It’s literally like spreading autumn on toast. It’s nutty, it’s not overly sweet and the best part – it’s dead easy to make. Sue, if you’re reading this, I make this pumpkin jam every year for Thanksgiving and it’s always a hit. 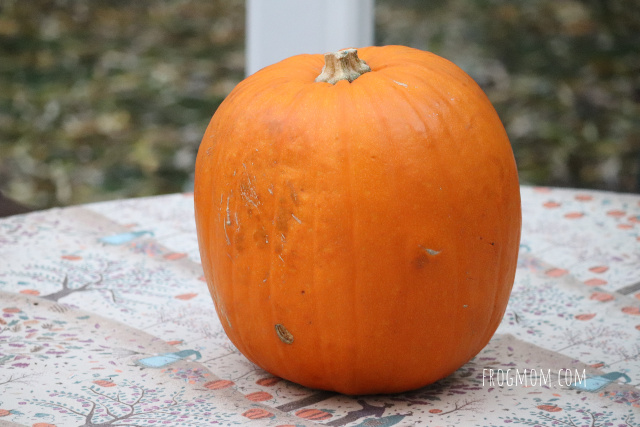 First, obviously, you have to get pumpkins which shouldn’t be too difficult after Halloween. The day after Halloween, all pumpkin prices are slashed dramatically in the UK and even better a couple weeks later, people start putting them out on the street. 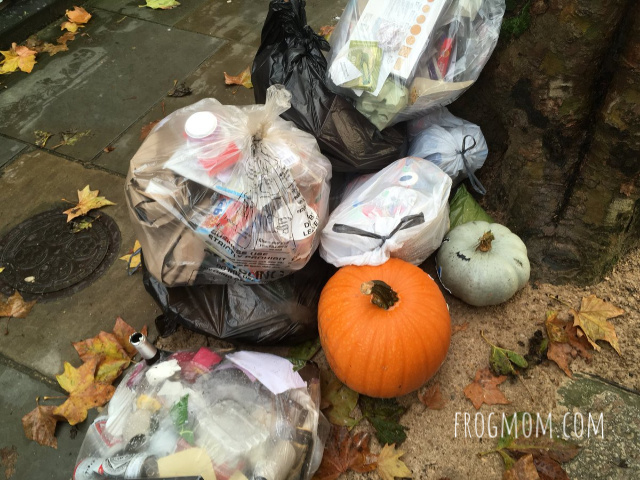 Now, I know the idea might put a few people off but I’m very concerned about food waste and if I see a perfectly good pumpkin out with the trash, I’ll stop and take it home. This year thus far, I’ve found three beautiful pumpkins on the street and used two of these for cooking. 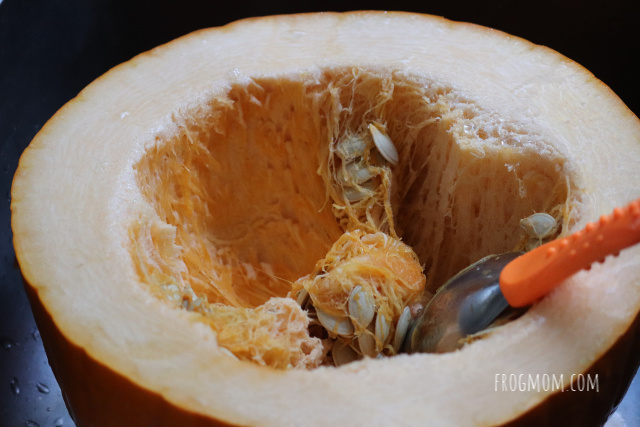 Making your own pumpkin puree is much easier than it sounds. I usually cut the pumpkin open in two, scoop out the seeds and place the pumpkin hollow side down in the oven until a knife pierces the flesh. That takes, what, 30 minutes depending on the size of the pumpkin? 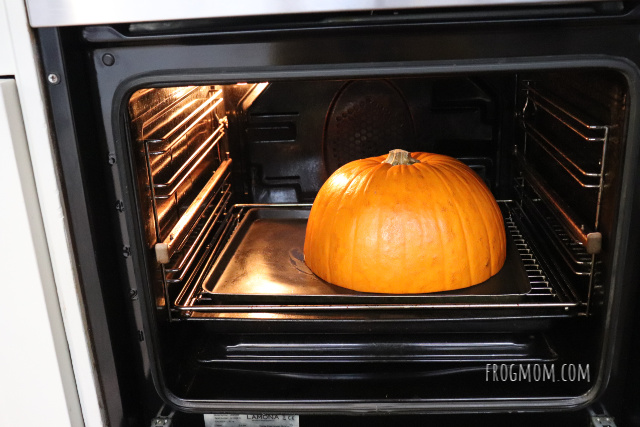 Once it’s cooked, I transfer it, still hollow side down to my sink draining rack so all the water can evaporate or drain. Turns out, pumpkins are full of water and unless you remove the moisture, you’ll have a syrup instead of a puree. 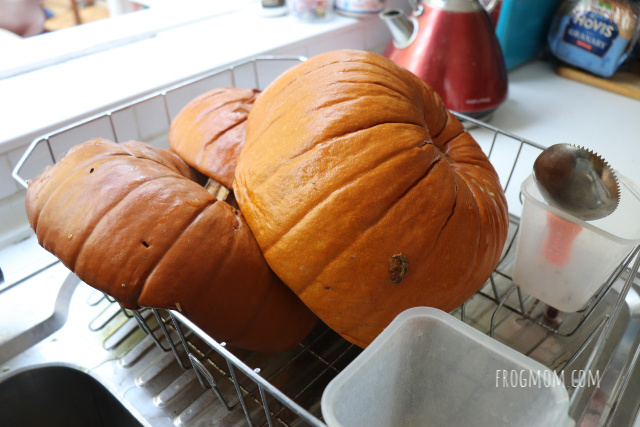 I forget about it for a night and the next morning, I blend everything in my kitchen mixer or I use a hand blender in a pot. Either way, I measure the weight I need before pureeing anything. 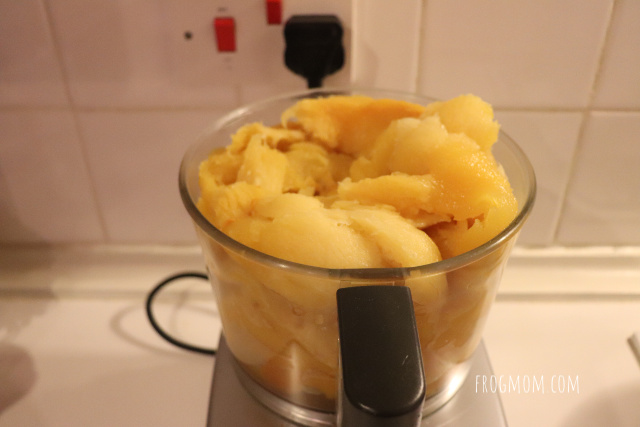 From there on, it’s smooth sailing. Add sugar, add spices, cook. On the spice note, I’d like to mention that this year, I used fresh nutmeg purchased from a grandmother in Mauritius through her granddaughter who lives in London.

Before stumbling upon Aisha from The Sweetest Tooth in a Facebook group, I had no idea what fresh nutmegs looked like. Truth be told, when I buy dry spices, I never wonder how fresh they are, whether they are stale or where I can get fresh ones – short of living in tropical countries. Fortunately, Aisha’s grand-ma lives in Mauritius, an island in the Indian Ocean, and she grows a few trees including nutmeg trees. Look at her, isn’t she fantastic? She’s holding a fruit from the legendary nutmeg tree (Myristica fragrans) whose early cultivation caused the Dutch East India Company to wage war against British tradesmen in the 17th century.

Once you cut the fruit open, this is what fresh nutmegs look like.

Who knew, right? The white flesh makes an excellent jam (from what I’ve read, I’ve never tasted it) and the core, once dried, becomes nutmeg you buy at the store in spice jars. The outer shell, the red film, dries up hard and becomes mace, a spice whose flavor is similar to nutmeg but more delicate. And finally, this is what Aisha sent me by post and that I store in a tea pot. 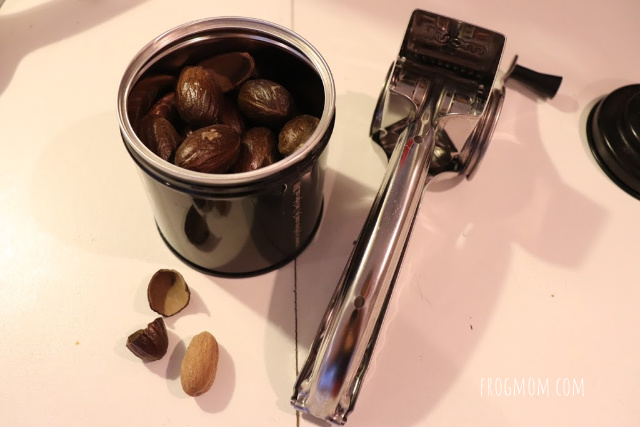 Aisha recommended that I use a nutracker to remove the dark outer skin (mace) and then use the inside nut as I would regular nutmeg. As I really wanted my pumpkin jam to be extra special this year, I used a hand-cranked cheese grater to grate a whole nut before adding it to my jam. 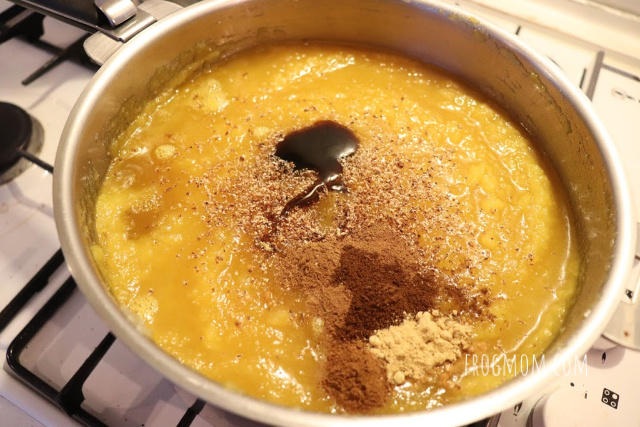 From Pumpkin Puree to Pumpkin Jam

It’s really simple. I dumped pumpkin puree in a large pot, stirred same weight of sugar, and added spices and vanilla extract (now I’m thinking I should have used a real vanilla bean). I cooked the jam for 45 minutes at low heat and covered the pot. Warning: pumpkin jam tends to bubble and explode in mini volcanoes. Unless you want to redecorate your kitchen, I strongly suggest to cover your jam while it’s cooking. Stir regularly to help more water evaporate until it’s reached a rich orange color. 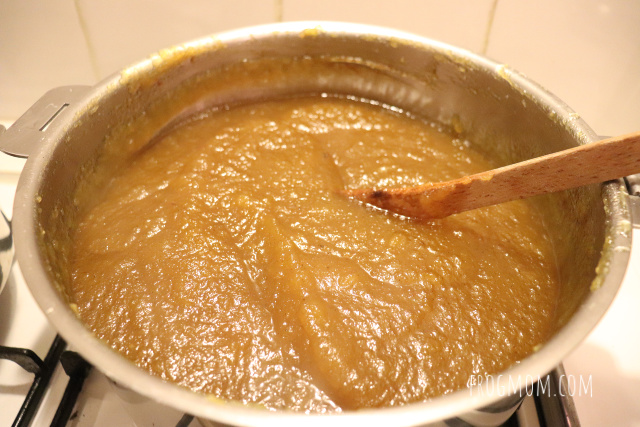 Turn the heat off, cool down and ladle into clean jars. 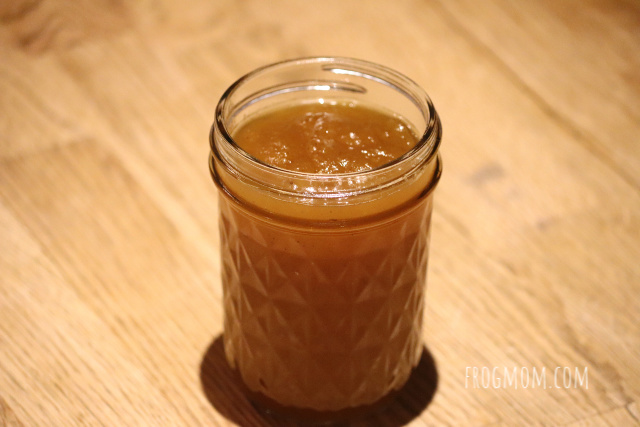 Out of my 2 kg of pumpkin puree, I made one large 1kg jar of pumpkin jam and 6 regular sized pots. I tried it the next morning on toast and I’m telling you – Aisha’s grandma’s nutmeg is a riot. It tastes even better than usual and I’m partial to this jam.