Looking for a way to spice up a family day outdoors? Simple as pie. Dress up as your favorite Star Wars characters and hit the trails! Short of the soundtrack and a few special effects, you’re finally living the life of your intergalactic idols. Here’s a northern California version of a Star Wars family hike but you can reproduce it in any old evergreen forest. I’ve included Endor forest scenes costume tips here.

Let’s go for a revival of The Return of the Jedi! 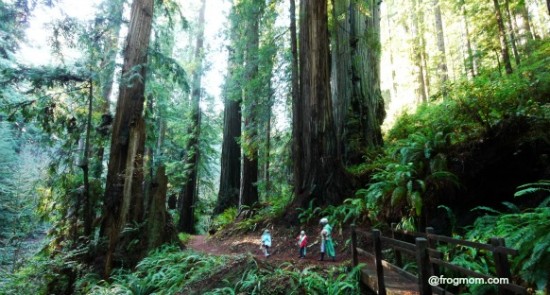 First came the idea. A year ago, I read that the movie’s Endor scenes had been filmed at Grizzly Creek Redwoods State Park. Almost in our backyard: it said “redwoods” and “California”, it couldn’t be that far. I had no idea where this park was but it jumped on my to-do list right away. Looking at the California map on my office walls, I realized Grizzly Creek was 300 miles and a solid 6 driving hours away. Gulp. I stored the idea and did some more websurfing on the Return of the Jedi locations, adding Jedediah Smith Redwoods State Park and a long-logged forest by the Smith River to my dream list.

A few weeks ago, my husband suggested we go up to Redwood National Park right after Thanksgiving. I was initially reluctant to go but then I thought “But of course! We can re-enact The Return of the Jedi” I had these simply equations in my head that just made perfect sense. Redwoods = Endor. Our family of 4 = 1 Princess Leia + 1 rebel + 1 storm trooper + 1 Han Solo. Our teddy bears = Ewoks. The speeder bike pursuit, well…. that’d be hard with a kids’ bike. It was just too geeky to pass.

Finally, we were going up north for sure, closer to the actual filming locations than I’ve been in many years. I didn’t have time to call rangers or the Lucasfilm PR people to find out more but I decided I could do some research on site. I packed the costumes (see below for how-to guidelines) in the car and we set off, ready to fight the Dark Side in style. 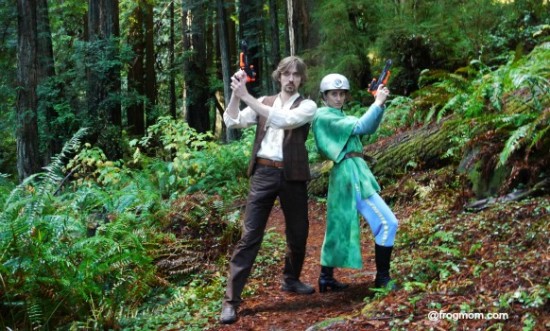 We were staying outside the tiny town of Orik, a pocketsize coastal town that really looks like the kind of place where Twin Peaks could have been filmed. The dreary weather probably enhanced the sense of disorientation. By a strange coincidence, the Orik Market sells boxes of Snoqualmie Falls Lodge Old Fashioned Pancake Mix, Snoqualmie Falls being one of Twin Peaks‘s actual filming mountain towns. Weird, eh?

At the visitor center of the Redwood National Park, I asked where we could find the coveted redwoods. By the looks I got, I was neither the first nor the last to enquire. “Had they known that 20 years down the line people would still be asking about them, they may not have destroyed the Ewok village!” exclaimed the park ranger.

No more ewok village. What was Lucas thinking? Hippies and Star Wars fans should have been consulted. It’s like The Lord of the Rings mountain sets that were removed because they were built on national park land – they could have been used to spur tourism and encourage long-distance hiking!

Well then, that left the rest of the Endor scenes. Where to? Two main spots: as mentioned earlier, Jedediah Smith Redwoods State Park was a biggie (Tall Tree Grove, to be specific), as well as the Smith River old growth redwood grove that has since been logged. For the speed biker scenes, rumors go that the scenic route Avenue of the Giants was used.

Since the weather forecast for the day was rain and we were packing up the following day, that didn’t leave us much time at all. Going to Jedediah Smith Redwoods fell through – time crunch. However, I picked up a topo map of the area to find some old growth redwoods nearby. In the end, what really mattered was to find a redwood forest that would look like Endor. It didn’t have to be the same exact one. Bingo! Just across from our vacation rental, there was a nice old-growth redwood grove with a bonus waterfall. Yoohoo!

The Return of the Jedi comes to life in the redwoods 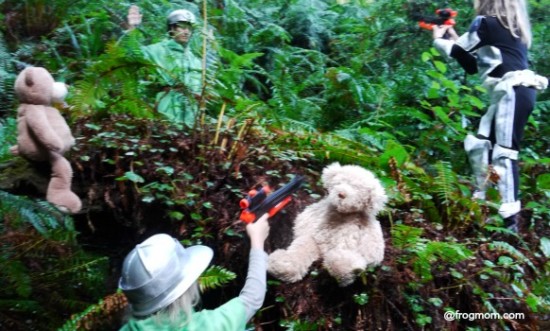 As field practice, we all watched The Return of the Jedi that night and my girls rooted for the ewoks like there was no tomorrow. The next day when the sun showed up after 36 hours of rain, we all geared up and crossed the road to the Trillium Falls trail. The place was a fern paradise – slightly too slanted for our photo needs (the Jedi Endor scenes are mostly on flat terrain) but we made it work nonetheless. We didn’t linger either. It wasn’t warm in those outfits by 40F outside! Mostly, my 5-year old thought that we were hilarious while my 7-year old thought that we were ridiculous but accepted to cooperate anyway. My youngest one couldn’t stop laughing. It’s the teddy bears, you see. 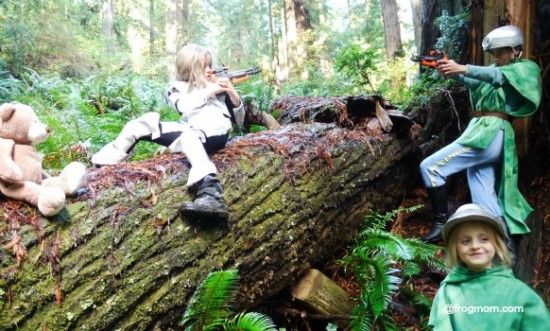 Let me show you. 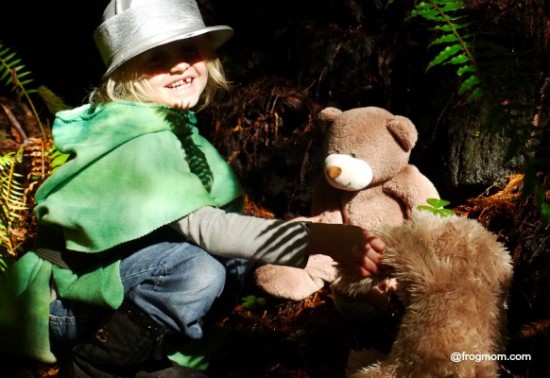 She just wanted to play with the teddy bears and how could anyone blame her? It’s just that I had a few scenes to re-enact and one of my models had no interest in authenticity. Therefore we took a second shot of this scene and that’s the serious version. 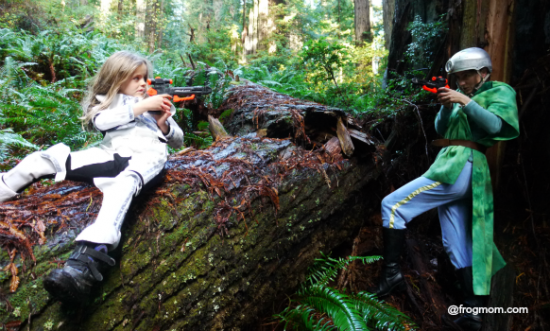 The tricky part was finding tree branches sticking out so we could rest the camera and use the timer to take shots with the four of us – and the teddy bears which the girls called their “wookies.” My husband carefully staged each scene and adjusted the settings on his camera because low light under the redwoods makes things tricky. This was the most elaborate – timer, stand and all! 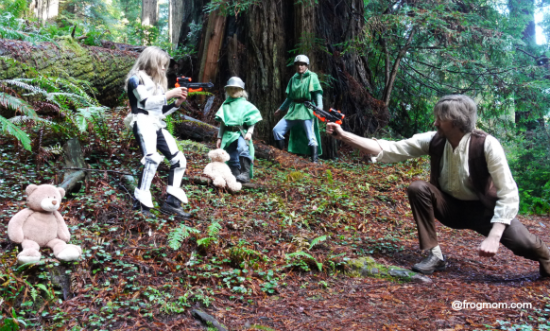 “Give up, you’re surrounded!” it says. Fortunately, no one else was on the trail that morning but us. I say fortunately because our 7-year old told me that this was embarrassing. Good thing the little one got a kick just of walking with a teddy bear! One last one for the road. (There are only so many scenes you can re-create without the bikers, the ewok village or the forest bunker.) 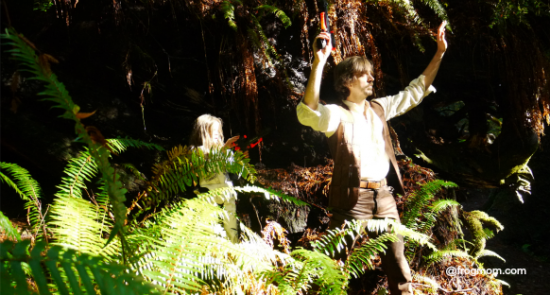 So there. The whole exercise took a couple of hours, after which we hiked to the falls and they were a beautiful culminating point of a lovely trail. The guys at the parking lot thought we were weird-looking but we quickly explained and so we became the incarnation of awesomeness! Let’s do that again, shall we?

How To Make Your Own Star Wars Costumes

Now comes the uber-geeky part: how to make your own Star Wars costume!

Everybody needs a little guidance. For generic and popular Star Wars costumes, the starwars.com website has a post on last-minute Star Wars costumes that offers some quick and cheap ideas. Nothing out of the ordinary but they’re quick fixes if you’re in a pinch. The cardboard stormtrooper would be for the crafty types, as is the hand-painted R2D2.

For other specific and less popular costumes, what better place to start than the very bible of all things Star Wars on the light side of the Force, the Rebel Legion website? They have amazing resources for every single character you can think of. I printed out their official costume standards for The Return of the Jedi off their Costuming Standards Master List. Oh, the camouflage tops!

If you’re on the dark side of the Force, go no further than the 501st Legion website and their ultra-comprehensive costume reference library. Honestly, may the crafts be with you.

For Han Solo, it’s actually quite easy. Goodwill or thrift stores have a large variety of men’s “adventure/casual” clothing. That’s where my husband’s vest comes from, as well as my black boots and blue pants.

While Princess Leia’s cinnamon bun style hair wig or gold bikini are easy to buy on eBay, good luck with the Endor camouflage outfit. It’s way at the bottom of everybody’s Star Wars list! To make it, I bought 4 yards of camouflage fleece online, spray painted it brown for earthier tones, cut out a big rectangle for me (measuring it’d come thigh length on the front and calf length in the back) and sewed a smaller hooded poncho for my 5-year old. After I stitched the wrong side up twice, I finally understood how to attach the hood!

The Leia and rebel head gear was the best part if you ask my girls. We all went outside and they watched in awe as I spray painted silver my bike helmet after gluing on a tight circle of military belting (2″ wide, simply stapled). My 5-year old’s bike helmet didn’t fit the format so I used a plastic fireman’s hat instead. Spray painting was fun! And now, I’ve got a unique bike helmet.

Teddy bears as props work fine. If you want something that a child can walk into, you’re in for a serious sewing camp and a few yards of furry fabric.

As for the child storm trooper outfit, that was a Halloween thrift store find but you can find a wide range on eBay. It’d be quite tough to make it at home.

Ready to explore the redwoods whenever you are!