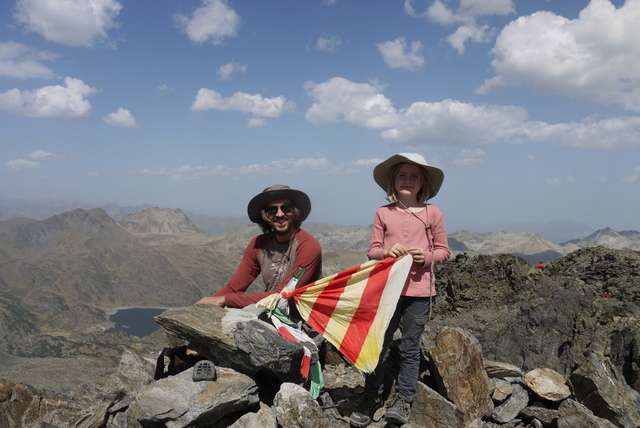 What is the most important message you want to teach to your daughters? Michelle Obama said, “Don’t be afraid to try hard things, don’t be afraid to fail.” When I first saw how far and challenging Pic Carlit was, I thought we were never going to make it. It was only 10am and we’d already hiked 6 miles to reach the foot of the mountain with my girls (ages 7 and 9 years old), my husband and my dad. From the trail junction the peak seemed not only massive but tricky. Strings of people tall as ants walked up the steep sides and with my eyes I tried to discern the trail. Right in the middle section, the trail became a massive jumble of rocks with sheer drops below. How did people navigate that section without falling? Were there any cables? Anxious, I predicted heights issues for me but kept my thoughts to myself.  Showing the tippy top to my girls with my hiking pole I just said, “Look girls, that’s where we’re having lunch!”

At 9,583 feet the Pic Carlit is a small mountain by Sierra Nevada standards but by eastern Pyrenees standards, it’s the highest peak of the range. Surrounded by 12 picture-perfect mountain lakes, the peak looks out to Andorra and consists of two separate summits joined by a narrow ridge. We spent the previous night at the Lac des Bouillouses, a reservoir used for electricity in the middle of a natural preserve. Unless you have a lodging reservation by the lake, you have to rely on shuttles to reach the trailhead and we wanted to hit the trail at 8am at the latest. Waking up at 6am, we packed up our bags, showered, rolled up our sleeping bags, and hit breakfast at the restaurant. Two Nutella toasts and hot drinks later, we were ready for the challenge. Or so we thought.

Goal: 8am on the trail. My watch showed 8.05am, close enough. Naturally, we split up in small groups. Always eager my 8-year old led the way while I hiked with my dad and my 7-year old brought the rear with my husband. Surprisingly other hikers were passing us, waiting on the trail or speeding up at our level. I say surprisingly because I didn’t think a 14-mile hike with 3,000 foot elevation gain could be so popular. However we kept up the pace and followed the well-trodden trail around small rocks, dirt paths, slowly ascending until we reached the high plateau where the picturesque 12 lakes shine under the sun.

Purple blooming heather and green grassy patches framed each lake so nicely I understood why these lakes had been called the prettiest of the Pyrenees. However none of them appealed to my swimming endeavors – low altitude, too much grass. Once we walked in lake territory, the trail leveled out and took us leisurely from one lake to the next. It was quite lovely and felt more like a Sunday stroll than a mountain workout.

“Horsies!” yelled my girls suddenly pointing in front of us. Grazing quietly in the high meadows, a small herd of wild horses stood against the backdrop of mineral mountains. When I hike up mountains I usually don’t expect wild horses along the way, let alone wild horses with traditional cow bells around their necks. OK then, not so wild. The girls were excited and my oldest went closer to pet one of the horses who graciously complied.

A little ways beyond the horses was the trail junction where people decided to stay on the lakes loop or go up the peak. A man lent me his binoculars so I could take a better look at the route. My dad had assured me it was doable, he’d already done it – when he was 12 years old. What if the mountain has dramatically changed over the past 60 years!? Unlikely, he replied. Still, that middle section underneath the peak filled me with angst. It was nothing more than a big old rocky mess, no safety nets anywhere. I wasn’t even sure it was safe for my girls. So far the youngest kids we’d seen on the trail were tweens.

It was 10am now and if we wanted to make the peak by lunch time (ahem, late lunch time), we better move our butts. Time to whip out the energy gummies for the girls! While the youngest was doing just fine and showed an endless supply of energy, the oldest was clearly tired. “Just leave me here,” she announced grandiosely, “I’ll wait.” Yeah right, like I was going to leave my child on the side of the trail for 4 hours with a risk of thunderstorms. Girl, you’re coming with Mom. “I need you,” I told her. “But why? You’re a grown-up,” she argued. “I need help with my fear of heights,” I confided. “If you’re by my side, it will help me overcome my vertigo.” The worst part is, it was true. I’d noticed it on the Canigou. Knowing that my girls – who are born mountain goats – were close by definitely helped me through the ordeal.

Looking at me worried, my little girl took my hand and said “Maman, I’ll help you.” That’s how, slowly but surely, we made our way up to the top. I – battling my fear of heights. She – forgetting her tiredness. My dad stayed with us but my husband was eager to reach the top and my littlest one skipped along happily. Heavy clouds were already forming above our heads and we were worried about late summer thunderstorms. Just the day before, five hikers had been struck by lightning in another part of the Pyrenees.

In the end, the thing that saved the day for my 8-year old was not entirely me. It was her love of bugs. Already on the Canigou she’d shown an unusual interest for grasshoppers. The Carlit was ten times more fun in the grasshopping department. They were everywhere, in every nook and cranny and tiny rocky crevice. Besides taking care of me, my little girl was in fact chasing grasshoppers and fine-tuning her catching technique.

That middle section was a killer. It was much closer to climbing than hiking. Even as I was reaching for the next secure hand holds and scanning the rocky edges with my fingers for a good grip, my feet looked for tiny ledges to rest on. I tried not to look down – that usually makes things worse – but I did have to find spots for my shoes. The glacial lake down below looked so small!

On two occasions I almost gave up and froze, shaking my head. My husband was convinced I’d never reach the top. He’s seen me quite shaky on less scary ground. It’s my little girl who got me up there. “You can do it, Maman,” she’d say, stretching out a hand which made me even more nervous because OMG she let go of a hand when she needed both! I convinced her to keep her hand and carried on, occasionally checking on my dad who was doing more than fine. He’s never had any heights issues. Boy was that middle section difficult.

Finally we came to a loose gravel steep trail which I much preferred. Loose gravel I can deal with. I breathed out a big sigh and became a real mom again, directing my little girl as to the best route. Here, not there, yes keep going, no not that way. By the time we reached the ridge with my dad, my husband and 7-year old were resting their feet on the higher peak close to the iron cross, about 200 feet up from us. Yet those 200 feet, I couldn’t bring myself to walking them. I’d already done so much, I was pooped. To me, the ridge seemed incredibly narrow yet it must have been completely navigable to everybody else. Though “everybody else” had considerably thinned out since the trailhead that morning. There were perhaps another 12 people around us. I dared not even enjoy the breathtaking view as indeed it was literally taking my breath away.

I opted to rest by the second peak, lower and closer to us. There we waited for my husband and 7-year old, my 8-year old becoming of a grasshopper friend. Lunch time! Saucisson, fresh apricots, green grapes, hard cheese, multigrain bread and Spanish Serrano ham came to the rescue of our rumbling stomachs. Two different parties came to us to ask about our daughters’ ages and congratulate them. They were by far the youngest, though the second party as a dad and his 10-year old son. At 72 years of age, my dad was also certainly one of the oldest at the peak but fitter than many. That’s how years of hiking build strong grand-dads!

Around 1pm we decided to make our way back. Coming down was easier than I anticipated now that we knew what sort of terrain lay ahead of us. Much to our surprise my 8-year old stumbled 3 times and lost her footing twice, showing that she was indeed quite tired. I stayed by her side and “coached” her in the middle section, my 7-year old staying close to her dad and light as a feather on these scary rocks.

By the glacial lake, my 8-year old stumbled once more but this time her shin landed on a sharp rock and she had a hard time getting back on her feet. I only had band-aids and cleaning wipes but nothing else. Fortunately two nearby hikers heard her cry and came with their emergency kit. Thanks to them, we were able to give her Tylenol for pain relief right away. Note to self: never forget your Tylenol on long hikes.

Down and down we went, each step easier than the previous one because the terrain got gradually mellower, until we were back in picturesque lake territory and grassy knolls. We caught up with the loop we’d started in the morning and by the time we reached the trailhead, it was past 4pm. I would have given a Kingdom for a bottle of Perrier! Fortunately there’s a nice mountain lodge by the trailhead. I sent my dad to save a table for us all and give him my order of drinks for our group – mine was 2 bottles of chilled Perrier.

When my girls arrived holding hands with my husband, they received a small round of applause from hikers we’d met at the top. “We hope they get a good reward!” they told us. “Ice cream,” we replied, “As much as they want.” Perking up at the sight of their sodas and the thought of ice cream, both my girls dropped their bags and ran to the ice cream counter to pick their flavors. And they’d just completed 12 miles and mountain? That’s how little girls are – always fired up whatever the circumstances.

As for me, I’m grateful I was able to complete this adventure thanks to a little girl who believed in me. The views were awesome. They really were.