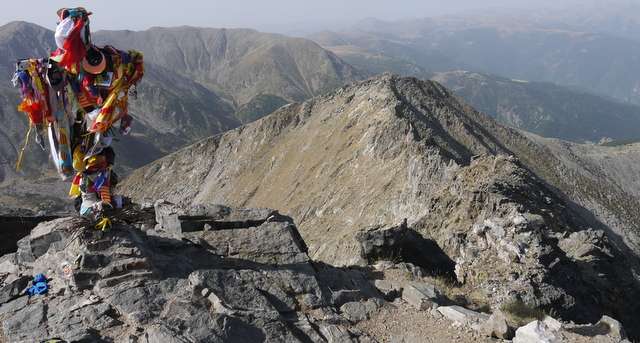 > Summiting the Pic du Canigou with My Girls

Summiting the Pic du Canigou with My Girls

I now understand why the Canigou is on so many hikers’ wish list. Though this walk is not for the faint-hearted, the views at the top and the sense of achievement are amazing. A Catalan metal cross that inspires pagan midsummer bonfires stands proudly at the top. Down in the valley, you can see all the way down to the roofs of the city of Prades and its 10th century abbey. Summer days see families mingle with Catalan youth or lone Irish walkers. The Canigou is an unforgettable mountain experience.

The iconic Pic du Canigou casts a long shadow on the plains of the Roussillon and in my family, it holds a special place. Painted by my great-great-grand-father in the late 1800s, the Canigou was the mountain he could see from the window of his bedroom. Call it his big backyard. He hiked it countless times from the valley and took his daughter along, which in the early 1900s, must have been unusual. My dad hiked it many times it as a child and then as an adult with his aunts. I was long due on the Canigou and was thrilled to have my girls and my dad in the adventure, the latter as our guide.

The 4-mile hike, featuring a 2,000 feet elevation gain to the 9,134 feet (2,784 meters) summit, took us just about three and a half hours and by the time we went down, the Mediterranean sun was blazing hot and we were happy we got an early start. The secret to our early start was a night at a mountain refuge called Les Cortalets. We arrived the previous afternoon after an atrocious two-hour long car ride on one of the scariest tracks I’ve ever seen – potholes, blind turns over sheer drops, one-car lanes with no pullouts, rock slides. I see why so many hikers prefer 4×4 private taxis to make it to the refuge.

In the morning we got up at 7am and gave ourselves an hour to get ready. Breakfast was a quick toast and jam affair washed down with tea bags and coffee, hot chocolate for my girls. We packed up our sleeping bags and belongings, stored everything in the car, adjusted the height of our hiking poles and filled our water bottles by the faucet that said “unsecured spring water.” At 8am, the sun was already up and we were on the trail. I looked at the summit and my fear of heights kicked in big time. How was I going to make it to the top?

Trail to the Summit

Starting in a pretty forest clearing and grassy pastures, the trail is surrounded by thick bushes of rhododendrons that crawl up the slope to the treeline. Apparently the late spring wildflower shows are amazing but even in the late summer, we saw a few pink blooms higher up the mountain. After reaching the ridge, we turned south and continued the long ascent on the back side of the peak, traversing two plump folds of the mountain before reaching the steepest part under the summit. This well-trodden trail is by far the most common but even so you have to keep a good balance because of the big drops. There is another way to summit the peak on the other side of the mountain via a notoriously narrow corridor known as “the chimney” where rock falls are the main risk. For obvious reasons, we went the “family” way.

As we took a breather by a big cairn, a big bird of prey soared from below us and continued rising way above the crestline until we lost it in the sky. Was it an eagle? No, it looked more like a vulture and I was blown away because it was the first time I saw a big bird in flight from above. Gives you an idea of the mountain landscape.

We continued our way and crossed the first summiters coming down the mountain. These guys must have left at the crack of dawn because we still had a good hour before the summit. “Mountain goats!” my husband yelled, pointing at white spots on the other side of the mountain. We held our breath at the sight of the elusive animals and pulled out the big camera – this was so exciting! A closer shot revealed the mountain goats to be …. a family of sheep grazing coolly between the rocks. Darn, so much for the elusive and rare mountain mammals.

Finally we were on the last slope, a much steeper version of the two previous sections where dirt was replaced by loose ramble and big rocks. I tried to concentrate on the next step and never to look down as I zigzagged my way up. More giddy than me, my girls were flying up the trail with my husband who was eager to get a “clean” shot of the summit without the crowds. Well, crowds is all relative at 9,000 feet but the summit is a surprisingly small platform so you don’t have a lot of elbow room to spread out and get your zen thoughts together.

At last, the last step and the summit! I held my breath as I looked for a place to sit down. The heights made me dizzy and our trail faced the top of the chimney, another reason for me to want to sit down. Two hard-core hikers emerged from the chimney and just looking at them gave me shivers. Around the orientation table, a group of young Catalans were singing The Internationale in Catalan, waving Catalan flags or draping them over their shoulders. Clearly, they were retaking what used to be theirs before Louis the 14th. Sitting by the cross, two moms and five boys were taking turns posing by the cross and munching on their chips. I pulled myself together and walked over to the Table d’Orientation, a round mosaic table that points to all the notable peaks and sights around. What a view! But oh for me, how high this seemed.

To make it back down before lunchtime, we couldn’t stay more than a half hour at the top so we pulled out a box of fresh figs from the garden, a tube of sweetened condensed milk and energy gel gummies to snack on. Zen, a lone bird and grasshoppers galore. A last group photo by the cross and we were on our way down. Coming down, my girls picked up “trail pollution” and my 7-year old gathered all the trash in the zipped pocket of her fleece and her small backpack. She was thrilled tto dump it all at the mountain shelter and wash her hands.

Noon, Canigou over. Just the grueling car ride down to the valley. It was awesome and great practice for the next day’s formidable hike, the Pic Carlit.

5 thoughts on “Summiting the Pic du Canigou with My Girls”