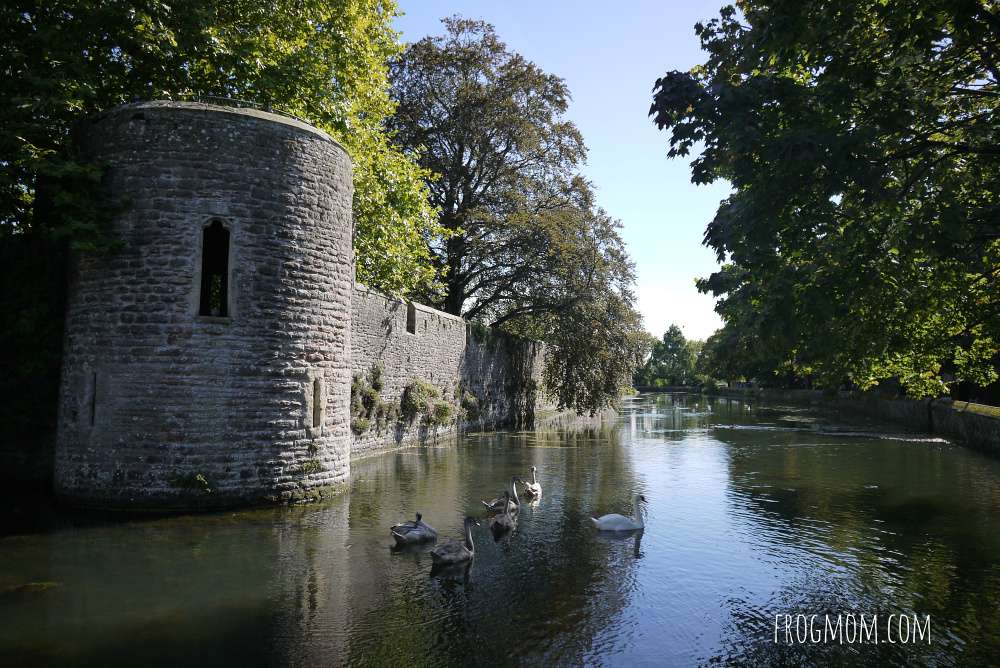 > Swimming around the Moat: Bishop’s Palace in Wells

Swimming around the Moat: Bishop’s Palace in Wells

Moats are unusual bodies of water to swim in. Their medieval origin and formerly defensive use are great fodder for tall tales. Are there skeletons at the bottom? What’s that lurking below the surface? Will I hit a rusty medieval grate around the tower? Or closer to reality, are there broken beer bottles under my feet? Regardless, the idea of swimming around a moat has always fascinated me and I’ve been lucky in that regard. I was able to swim my first moat two years ago. It was at Broughton Castle in England and rather surrealistically, we were led around the moat by the castle owner who gave us a tour from the water. This time, I found another moat to swim in – Bishop’s Palace in Wells.

How to Find a Moat in England

Believe it or not, even in England, country of the medievally-minded Monty Python, finding a moat is not that easy. Some moats have been filled. Some moats belong to organisations with strict health & safety policies banning any sort of moat frolicking, including swimming. There’s also a slew of castles without moats because caring for moats is a lot of work. So there. Finding a moat is a challenge. I use a combination of:

How to Find a Moat for Swimming

Then, finding a swimmable moat is a second layer of difficult. For a moat to be swimmable, it has be:

What if you feel like you’ve had enough and want to get out of the moat, do you have to climb a 20-foot high stone wall to do that?

As my readers know, I love unusual swimming adventures (such as ice swimming in the Arctic Circle in Norway, swimming to an abandoned prison island in France or bog swimming in Estonia) and swimming around a moat is definitely up there on the scale of fun.

So in the spring of 2018, I found a good-looking moat. It looked big enough, filled with water and was located in a quaint British city. As I had done for my first moat, I contacted the owners: could I swim in their moat? I’ve found that rather than sugarcoat it, it’s easier to explain directly that you’re there to swim. What was the worse that could happen?

I called a few days later, to make sure they hadn’t misunderstood. What if they said yes by mistake? Yes, I was bringing a dozen people to swim in the moat. We knew the risks, we were adults able to take our own decisions, we would be thrilled and last but not least, we would respect the moat. No moat vandalism from us. All would be done to the highest standards of civility.

Fortunately, they had understood the question the first time around and they still said yes.

In fact, they were super nice, explained to me that we could get in the water by the Gatehouse, that if we wanted a full circular swim, we might have to exit at the drawbridge (moat problems, eh) and jump in again, that there were a few underwater plumbing pipes that they would point out and that organising a private tour for us was no problem.

Can I say that the people at the Bishop’s Palace in Wells are the best?

Swim Day Out for the Serpentine Swimming Club

From there, I organised a day out for the Serpentine Swimming Club and more people than I expected said yes. That September morning after torrential rains, twelve of them showed up with family and friends to swim around the moat. I had been more than a little worried that they would give up with Storm Ali but these are hardy swimmers. They were ready to jump in before I was.

Passing visitors in coats in the courtyard, we caused quite a stir walking out of the Learning Room in our swimming costumes and bare legs. People were curious. Swimming? More than a pair of incredulous eyes followed us to the Gatehouse and outside the palace, more bystanders gawked. Were we serious?

Before we even had time for a group photo, Neil and Alan were in the water, splashing about. Justin, birthday boy, was quick to get in too. One by one, slipping from the low stone wall, we all entered the water.

On first contact, it was cold. Colder than the Serpentine for sure. None of us had brought a thermometer but my guess is around 14C/57F. Summer had softened us and I was finding it a tad chilly.

On second contact, what was that? A slimy semi-rigid thing had brushed my arm in the water, a soft something I might have thought cute on dry land but slightly creepy when swimming. Turned out, I wasn’t the only one encountering slimy unidentified objects – or plants. My husband had touched something and recoiled in disgust, as much as you can recoil in the water. Others were swerving from unseen obstacles and charting new courses in the moat. Clearly, the moat was full of weedy surprises.

After my brain playing mind-tricks, I came to a simple conclusion. Who cared? It was only weeds. I discarded all worries and really started enjoying the swim. It brought back memories of the English classic book I Capture the Castle. In the book, 17-year-old Cassandra goes on a midnight swim in the moat around her family’s crumbling castle home, with her friend Neil. She observes, “The water made slapping, chuckling noises against the walls and they gave out a mysterious smell – as when thunder rain starts on a hot day, but dank and weedy and very much of a night-time smell too.”

Dank and weedy, yes, it probably smelled that but nothing like what we experienced further down the moat. Before we reached the first corner tower of the Bishop’s Palace, all of us admired espaliered pear trees heavy with golden fruit, stretching their branches on trellises clinging to the outside walls. Oh, I would have loved to jump out of the water for a juicy pear but I had promised civility. No stealing pears, then. We admired the autumn fruit as if we were walking down a garden alley, politely and with the genuine interest Brits have for anything garden-related.

The first stretch of the moat was squeezed between a high wall on one side and a city street on the other, which resulted in quite a few people following us on foot. At the first corner tower, we turned left and I polled the other swimmers. If it was too cold for them, we could return the way we came. If we forged ahead, there was no going out before the drawbridge. Their choice. As far as I could see, neither the high stone walls nor the steeps banks would allow for an easy exit.

They chose to go on and they were gloriously right.

Ironically, the second stretch of the wall was a real jungle. If we had had a taste of weed before the first corner tower, now came the piece de resistance. Full on weed, so thick with long green fibres that I started walking on a cushion of weed. It was too heavy for me to lift my arms out of the water as they were dragged down by weeds, so I sunk my feet in the silty bottom, advancing waist-high in the water. Justin remarked on the defensiveness of the moat, “They weren’t trying very hard, were they?”

No, they weren’t trying very hard. As I moved forward, a thickening belt of weeds built around my waist and on several occasions, I just grabbed the whole lot with my two hands, lifted it (as you would a bucket of wilted spinach) and dumped it behind me. There was no other way to move forward and boy, was it fun. What an adventure! Who knew what we were going to find around the second corner tower. Tentatively, I found a weed-free channel and breaststroked around the corner and met an enchanting sight.

A waterfall! Wait – a waterfall? Yes, the third stretch of the moat, now running parallel to the 13th century palace, ended with a small waterfall at the end. What a lovely surprise. I turned around to mention it to my husband and he looked like a male naiad basking in the sunlight. I know it sounds corny and I don’t care (he usually doesn’t look the naiad part) but sun rays shining down on him gave him a most unusual “nimphy” glow. I kicked myself for not bringing along a waterproof camera and plodded on.

By now, we were fully acclimatized to the water temperature and felt great. “It’s magical,” said Alan in front of us. True enough, that stretch of moat came to an end too fast. I wish we could have slowed down time just then to appreciate the tranquil water, the high walls, the autumn sun and the lush gardens revealing themselves in front of us.

Back to reality, a member of staff had stepped outside the palace and was taking pictures of us, documenting our swim until she realized something we couldn’t see. “Hold on, come that way! Swim away from the garden,” she said as she gestured that we should stick to the inside wall for the third corner tower. What was the problem? I later saw that part from dry land and understood her concern. Moving so much silt in the water, we couldn’t see anything at all but when the silt had settled down, the water showed a very shallow portion and a deeper channel.

We attempted a few strokes in the deep channel and reached the home run of the moat – so to say. In front of us was a wooden bridge entirely covered by a giant golden willow tree. Was it the drawbridge? No, it wasn’t and it was very shallow too. Literally crawling on our stomachs, moving along with our hands on the muddy bottom, we ducked under the bridge and undulated through the sunken roots of the willow tree. The stench coming out of the moat was bad. Now, this was the true revenge of “dank and weedy.” Wow.

Nevertheless, the light under the willow tree was magical and we all giggled, wriggling like big pale worms in the murky moat. Tourists walking on the bridge found us very amusing too, no doubt.

Drawbridge: Over or Under?

Finally, the drawbridge was in front of us. We had to make a choice.

Duck or get out?

One by one, we exited the moat on a wet stone wall and walked back to collect our stuff, mustering all the dignity that we could in our swimming costumes.

Did everybody enjoy swimming around the moat? You bet they did. One of our adventurous swimmers, Ann, went for a second dip in the afternoon to keep company to Anne (who was late for our first swim) and loved it even more.

If you wonder how this all looks like from the air, here is, courtesy of Mike, our itinerary precisely measured and documented in the moat of Bishop’s Palace in Wells.

Now, re-reading my copy of I Capture the Castle, I sort of fancy a midnight swim in a moat.

Do I have any takers?

4 thoughts on “Swimming around the Moat: Bishop’s Palace in Wells”