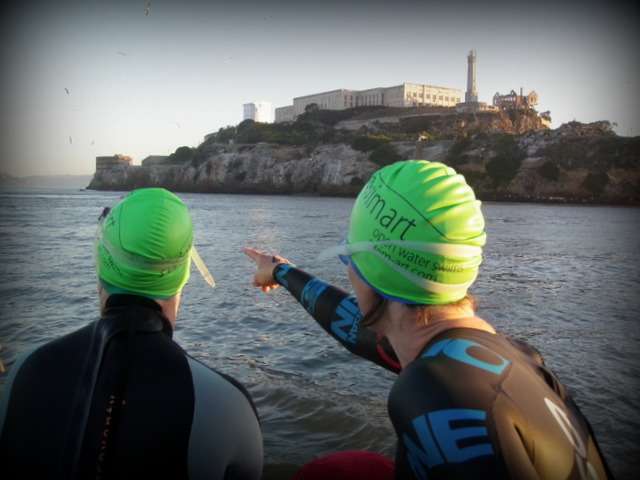 If you’re going to do something crazy, might as well inspire the kids to dream big. Four years ago I couldn’t swim one lap in a 25-yard pool and my idea of swimming included tropical summers. Two weeks ago I completed my third swim from Alcatraz to San Francisco, perhaps the most “casual” – if there’s such a thing as a casual Alcatraz swim. My girls were by my side on the early morning boat that dropped 18 swimmers in front of the penitentiary. “Go on mom!” they said before I took the plunge. I waved back at them and swam away. Man, the city seemed so far! An hour and 15 minutes later I was on the beach at Aquatic Park and my girls greeted me with joy. I hope this inspires someone to boldly do something they thought they were not able of – and do it!

Why swim from Alcatraz?

Because of the odds and the coolness factor. The main question people ask when visiting Alcatraz is “did any inmate ever escape swimming?”  The short answer is yes but only one survived – and was quickly recaptured. He was too tired from his swim. Besides, Alcatraz inmates did not have any opportunities to exercise and were out of shape. Without a wetsuit, they were ill prepared to survive the swim.

On paper, swimming 1.5 mile is equivalent to 96 laps at your local pool and it shouldn’t be such a big deal if you clock in enough lunch-time practice. What makes Alcatraz a challenge is the combination of cold waters (52 to 65F), the currents (if you float on your back from the Rock, you’re under the Golden Gate Bridge in 45 minutes), the waves slapping at your face, and for many, the uneasy feeling that something might be swimming below you right now except you can’t see it. On the day I swam, the water temp was 55 Farenheit (12.7 Celsius) and the currents far out-tricked our expectations. We ended up swimming much longer than initially planned but it was one of those glorious spring days and sighting with the morning sun shining on the city was worth a million bucks.

Both part of the Escape from the Rock triathlon, only the swim part. You can read my first -wretched and miserable – experience here and the second – better, much better – here but let me tell ya. Jumping with 600 wetsuited swimmers who are mostly better than you is scary. Fun but scary. Also, no two Alcatraz swims are alike.

In 2009, I started swimming in the San Francisco Bay with Swim Art under the masterful guidance of Leslie Thomas. She knew her stuff, she was relaxed and made us feel like we were gonna do it. With Swim Art, I did a swim from the San Francis Yacht Club to Aquatic Park and many many swims around Aquatic Park and Treasure Island. This year I wanted to try an Alcatraz swim with less than 600 swimmers swimming across and over my body so I signed up for the first Swim Art Alcatraz swim of the season in April. \

After sign up, Leslie assessed everybody’s swim skills with a detailed questionnaire and offered a private kayak option for those interested. She then grouped us by “pods” of equivalent swimming ability. Her final  instructions on the day before: get a good night’s sleep, show up at 6am at Aquatic Park, jump from Alcatraz at 7am.

At 5am, I woke up my two young sleepyheads who had rehearsed the drill the day before. Get up, smile, get dressed, head out the door. They were really sweet to do this on a Saturday but I had little choice, my husband was traveling. Thankfully, they were up for the boat ride and in great spirits because they had never seen a sunrise over the city before. At 6am we parked at Aquatic Park and Leslie briefed us on the conditions. Here was the plan.

We might need to jump 10 minutes early because of a big tanker that was going to  be cruising by in the bay. Another group led by the South End Rowing Club was starting shortly before us from Alcatraz also. For the first 2/3 of the swim, we should aim west, between the eastern end of the Muni Pier and Fort Mason depending on our ability. The tide should come in at about the 2/3 point and carry us nicely to the entrance of Aquatic Park. Good plan.

We boarded a small boat at Hyde Street Pier, giving us a beautiful view of the ferryboat Eureka in the morning sun. I had brought a big fluffy jacket to keep warm but surprisingly, I didn’t need it. My 8YO munched on her cereals while the 6YO clung to me like an oyster to the rock. My swim partner Becky was chatting with another swimmer and I watched the skyline get smaller and smaller. In front of Alcatraz, we didn’t stop where the triathlon ferries stop east of the island but rather more in front of it. In fact there was a big rock with pelicans on it.

“Porpoise!” I yelled after seeing a dark shiny fin surface and disappear. No, it was only a sea lion. “Don’t tell me if you see anything bigger,” said Becky. Oops. Leslie didn’t waste any time and started the count down. The faster swimmers went first. Single file, one by one, we were called. I hugged my girls, heard my name and jumped without thinking, pushing my goggles tight on my face so they wouldn’t go flop in the water.

Surfacing, I turned around and waved at my girls. If the water was cold, I didn’t notice. The adrenaline rush was such that I was focused on one thing only: find my kayak and start swimming. Which I did. Aim for Fort Mason, aim for Fort Mason I kept telling myself. I could see Fort Mason clearly but it seemed far. Blocking my brain to any live creatures below us, I just swam in my usual one-gear way. Left, right, left, breathe – right, left, right, breathe. Sight occasionally, check your kayak is around. The water wasn’t choppy but some bigger waves had me swallow salt water despite my better judgment.

Around half way through, I noticed I had no idea where my kayak was anymore. So much for “staying with my pod.” One of the kayaks paddled by and re-adjusted my course. I was aiming too far west. Really? This did seem like the right direction for Fort Mason though. And then 10 minutes later, new instructions came. “Aim for the TransAmerica Pyramid!” Where did that come from? Wasn’t the flooding tide supposed to carry us east at some point? Apparently not.

About 300 yards from shore, I noticed a group of swimmers next to the pilings of the easterly buildings of Fort Mason. What were they doing there? I also noticed I wasn’t moving despite my swimming. Dang, that current! So this explained that. The tide was still ebbing and we had aimed too far west of our goal – the 50-yard opening of Aquatic Park. Reality check: we needed help. I swam parallel to shore, avoiding at all costs getting too close to the shore where the current is stronger.

If you look at the photo gallery, you’ll see three of the stronger swimmers actually swimming underneath the Muni Pier, cutting across the pilings to reduce the influence of the strong ebb along shore. Now that’s crazy and don’t ever do it if you’re not a super strong swimmer. These concrete pilings are covered in sharp shells, I don’t need to draw you a picture. Hats down to the three swimmers though, you guys are my heroes.

A motor boat came closer and I recognized Becky on board. She was getting re-positioned and she had been part of that group against Fort Mason. I hopped aboard too. Seeing where I was, there was no need getting exhausted going nowhere. The pilot dropped us further out at the level of the western tip of the Muni Pier. And so began our slow, slow, slow swim against the current along the curved walls of the pier to get inside the cove. It felt like an eternity.

Half way along the wall, the announced tanker – a freighter, actually – sailed through the bay and a rush of big waves pushed us against the pier. Ooh, adventure and more adventure! A kayak girl – don’t know her name – came next to me and told me I was doing great. Yeah, right. Except she was really nice and from there on, she followed me until I made it into the cove. Her presence really helped me re-focus and follow the right course. I passed the fishing lines hanging from the Muni Pier – a handful of anglers were commenting on us. Yay for being inside Aquatic Park!

Once inside, it was a piece of cake. It takes a swim in the bay to realize how sheltered Aquatic Park is from the bay waters. Wow. I aimed straight between the boats to the Maritime Museum. That big white building is a good target when sighting for a landing spot. Allen took pictures of all the arrivals – and super nicely authorized me to reproduce his photos on Frog Mom. Thanks Allen!

So there it was. Alcatraz, done. In the words of one of the veteran swimmers on the swim: “That was a real Alcatraz!” As Leslie said, the ebb was vicious and relentless.

My girls arrived a few minutes after me. I was thrilled to see them. The 8YO gave me a quick hug – “I’m proud of you but you’re wet, mom” – and the little one didn’t care – “My mommy!” Ah my little troupers. “How was the boat ride?” I asked. I couldn’t wait to hear their version of the swim, was there excitement when the freighter went by? “Freighter – what freighter?We couldn’t see you, you were too small anyway,” explained the 6YO, “So we just played the whole time.” I burst out laughing. I was too small? Well that’s not an everyday occurrence. Good thing they brought games along.

Wrapping up on the grassy expanse overlooking the bay, some swimmers estimated we swam 2 miles. I don’t know. Everybody agreed that was one strong ebb. An hour and 15 minutes is a long time to swim without taking a break. I didn’t feel the least tired but but I was ravenous. I had my hot tea with me but nothing to eat. Girls, breakfast time!

How the Kids Relate

Later in the car when my girls told me they were nervous about a future athletic event at school, I told them I had been nervous for Alcatraz too. They looked at me surprised. Really? Them kids really think us grown-ups have it easy. Yes, really but you girls can do it, running around Kezar Stadium for the school’s “Olympic games”. The 6YO looked dubious. She hates running. “She’s right you know. If mommy can swim from Alcatraz, you can run around the stadium,” confirmed the 8YO to the 6YO. On that note the 6YO perked up. “You think so?” My 8YO nodded. “I’ll train you,” she added, “Just like mommy trains swimming.” Smile. Maybe in one small way, my swim did inspire them a bit.

Have you done something you never thought you’d be able to do?