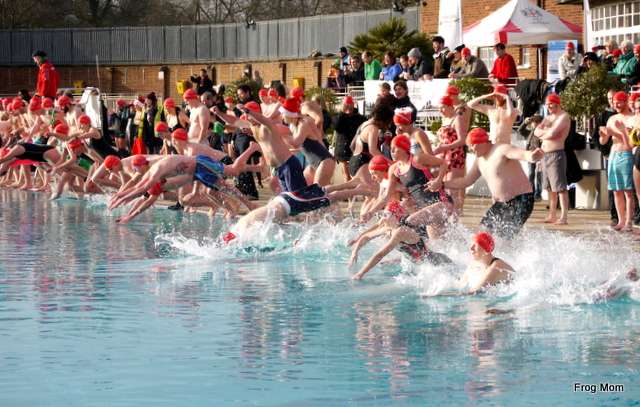 How do you feel about swimming in 3C/37F degree water in December in London – anyone? Hmm, I thought so. As a fellow swimmer told me before we jumped in, “They let you out for the day?” The lunatic asylum, he meant. The Outdoor Swimming Society‘s December Dip is now a legendary “festive season” London event and I joined more than 400 daredevils to boldly brave the arctic-condition waters of an outdoors pool in north London. Brass band, mince pies, fancy costumes, freezing water – it was going to be memorable. Here’s the skinny on the December Dip.

Though I’m an open water swimmer, I’m water-shy when the water dips below 10C/55F. I’d never even done the Polar Bear swim in San Francisco. I like my wetsuit and this event was a swimsuit-only event. Brrrr. Despite the odds, I didn’t think long before shelling out my 15 pounds. Or as my husband says, I didn’t think at all. Why? To prove I could do it. To see how it felt.

Fast forward to D-Day. On the train to Gospel Oak station, I filled in the waiver that roughly said I was in good health, had no serious heart condition, was not hungover, knew I could drown in atypical conditions or risk hypothermia by going in the water. The usual verbiage for a cold water swim though I’d never seen the “hungover” part before. The obvious subtext was, what are you thinking? My coldest so far had been 11C/52F but it had been with a wetsuit for half an hour in the San Francisco Bay in February. I assumed it couldn’t be that hard to swim 60 yards in freezing water because it was that much shorter. Right.

Arriving at the Parliament Hill Lido (that’s an outdoor swimming pool, y’all), an Outdoor Swimming Society banner was proudly displayed outside. “This is it,” my girls said. We went in and I registered in the hallway. A sign flashed the outside and water temperatures in electric lights – respectively 5C/41F and 3C/37F. Gee whiz, I thought. Even that frozen lake at Lassen National Park that I dipped in, it couldn’t be that cold. Could it? Shaken but not stirred, I changed into my swim suit so I could be one of the eager swimmers in the first wave. With 400 registered swimmers, the organizers planned 3 different waves plus an “Arctic Adventurers” wave (2 lengths instead of two widths).

On the up side, I was now ready to go. On the down side I was an hour early since the first wave wouldn’t start util noon. Fortunately the North London brass band was setting up and we soon had musical entertainment to listen to. Fifteen minutes before the first wave, the founder of the Outdoor Swimming Society and  Thick of It actress and celebrated writer Joanna Scanlan took to the mike to cheer us on. “Swim on!” they said. The crowd was getting restless and impatient to get it over with. While a handful of brave swimmers had already jumped in for laps, most of us were just staring at the water and wondering how bad or exhilarating it would be.

Finally they announced the first wave which, quite informally, was just going to be the first hundred people ready to swim. I stripped to my swimsuit on the cold cement ground, handed everything over to my cheerleading squad and lined up. My girls were right behind me with a camera, my husband on the other side of the pool with another camera. The water was clear blue and crystal clear, the sun shining golden ripples on the surface. That’s when my left hand neighbor went, “They let me out for the day?” My right hand neighbor had prepped by taking a cold shower that morning. She looked at me, puzzled “Are you going to jump in or dive?” No way I was diving, ever. I knew from experience my head would feel like in an anvil. “Jumping,” I replied.

Before we knew it, a countdown started, repeated in unison by the crowd of onlookers. 8! 7! I remembered what the memo on freezing water said – exhale as you jump. 6! 5! Focus on your breathing, it said too. 4! 3! Just swim on. 2! Is it gonna hurt? 1!

As the band played Gloria Gaynor’s song “I will survive”, we all jumped in. It was not the most graceful jump – I was trying to avoid swimmers left and right – but as soon as I was in, I started a fast freestyle without dipping my head. Above all I wanted my head to remain dry. My Santa hat held on and water splashed everywhere around me. Focusing on the other side, I breathed fast and milled my arms around but I soon found that breathing was tight. I couldn’t fill my lungs to the fullest. I tried breathing more slowly but I sort of had to time the breathing with my arms so that didn’t work. Right. Not good. Think fast. No more freestyle. Breaststroke, then.

Breaststroke did the trick. It was much easier to control the breathing with breaststroke and I slowed down my breathing, watching white puffy clouds come out of my mouth as I exhaled. Had I been less in a hurry to reach the other side, I would have liked to admire these puffy clouds. When I touched base on the other side of the pool, I knew I’d do the return. The hardest part had been the first 20 yards. I followed a chaotic beeline to the ladder to exit the pool and smiled to my husband for a “hey, this is fun” photo. What a good reporter he is. Always at the right spot. Returning to my huffing and puffing, I reached the ladder and pulled myself out of the water.

The rest of me was fine but my feet burned like blazes. My girls were grinning ear to ear, congratulating me, and my husband was by my side in a pinch with a towel. Still, my feet felt like they could use some socks. I quickly grabbed my stuff from my husband and went to change back into dry clothes. The ladies’ changing area was a funky 1930s big room with open stalls and a bench in each. Some women were delighting in warm showers but I’d read it could be bad for blood circulation so I refrained. Bench. Towel. I took care of the feet first and dried them thoroughly before slipping on the socks.

Once fully clothed, I almost didn’t feel the need to put on my wool coat back on – gee, the air was 2 full degrees warmer than the water – but I knew it’d be a mistake so I layered up. Outside, the Artic Adventurers wave just kicked off and my girls watched with glee. “Let’s go have a hot tea,” I offered. On the other side of the pool, booths in the clubhouse offered warm drinks and snacks (stollen, mince pies and shortbread) while a guy was setting up a ginger wine “Sneaky Tipple” booth. How festive it was!

I now saw groups of people cheer each other up, getting photographed in their fancy costumes, and some gals running in bikinis though it seemed they should be dressing by now. The exhilarating aftershock! The hot tea felt wonderful but I shivered so hard that I spilled tea all over my hands. I had to set the cup of tea on a handrail to steady it so I could drink. That, my husband didn’t like at all. It worried him. My girls thought it was funny. Truthfully, I was fine. Just warming up limb by limb.

Before leaving the pool, I snapped a few shots of great costumed swimmers. The winner was a merman. I got up close and asked, “You did it yourself?” “Uh huh,” he replied. I looked more closely at the shiny scales. “You cut the pieces and stitched them on?” He shook his head. “I glued them on,” he said. And then I saw it. The merman had actually glued scales to his skin from the waist down. “How you gonna take them off?” I wondered. “By peeling them off,” he replied. As we walked away, my girls were as dumbstruck as me. “He better take a warm shower when he does that,” offered my 7-year old, “It’s gonna hurt.”

See. Jumping in arctic water is not so bad after all.