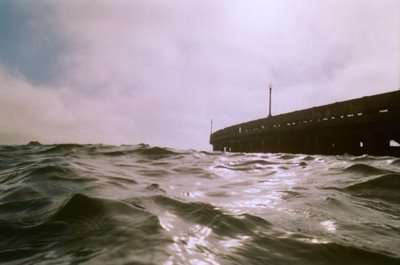 “When you hit Fort Mason, cut to the wall,” said Leslie Thomas of Swim-Art, a group that organizes open-water swims in the Bay. “The current is very strong and it will push you parallel to the shore. You want to make it to Aquatic Park’s opening as quick as you can.” As the last building of Fort Mason stood across from us, Barry the kayaker instructed our group to cut to Aquatic Park’s wall. NOW. I started swimming. Really swimming. As if I’d been loafing about all the way from St. Francis Yacht Club. Until then, I’d been in denial of the current. Now, I could see easily myself floating away to Vallejo. I just couldn’t believe how strong the current was.

On any given Sunday morning, waking up at 5.45am is probably not your usual routine. Mine either. But waking up bright and early to jump in 55 degree waters to get slapped by salty waves in the Bay? You’d have to be nuts/masochistic or seriously motivated. I like to think I’m part of the second group with a total understanding of the first group.

At 6.30am, I parked along Aquatic Park. My friend Christine pulled in at the same time. I had changed into my wetsuit directly from my pajamas so technically speaking, I was ready. While Christine changed, I observed a lone swimmer who was already doing laps along the buoy line. A guy suffering from agoraphobia maybe? Later in the morning, you sometimes have to fight for your square footage of swimming water. Leslie arrived and other people gathered.

We were to break into two groups (fast, not-so-fast) and drive to St. Francis Yacht Club at the Marina in two cars. There, we would wait for the last person, get instructions on the currents and dive in. On the parking lot, I was getting pretty cold barefeet without my fleece jacket. Shivering in fact. The air was brisk at best. We could only see the base of the Golden Gate Bridge’s pillars. The rest was fogged in. Therefore, I couldn’t wait to jump in the bay. Swimming would warm us up.

Mark and Robert, two swimmers, pointed at a black head bobbing in and out of the water. “Check it out, there’s plenty of sea lions out there!” they said. Indeed, we wouldn’t be the only ones getting wet. Finally, it was time to get in. We understood the drill.

Total distance roughly 1.5 mile, feels like 1 mile because of strong current coming in (from the Golden Gate Bridge direction Bay Bridge). Hop from buoy to buoy until you’re one fourth of the way to Alcatraz and then swim. At Fort Mason, cut towards the wall without waiting. Follow the wall 20 feet away and enter the lagoon. It should take just under an hour. There. We also knew to stick with our group and frequently check with our kayaker. Both were equipped with radios and connected to Leslie who would wait for us at the finish line. Barry and Colin the kayakers also had a horn that they’d only sound to get our attention in case of emergency.

We got in. The water felt good, not quite as cold as I expected it. After a few breast strokes to get water flowing down our spine (ah, the “wet” part in wetsuit), we broke into freestyle to get to the first buoy. Suddenly we felt fine and the waves not bad at all.

As expected we wouldn’t see a darn thing underneath. I sort of scouted for sea lions – didn’t really want to bump into one by surprise but given the visibility I wouldn’t have any choice- and jellyfish but all I could see was a green glass sea with tiny bubbles sparkling around me. It was invigorating and I forgot all about getting up at 5.45am.

As it’s hard to tell distances in open water – no black lines to follow at the bottom you see – we sort of hopped from point A to point B. Past the two buoys, we saw the shape of Fort Mason’s buildings against a dark silver sky in the distance and swam towards them. Not sure we could have swimmed against the tide anyway. We were on a high-speed train, so to speak.

As salty as the water was, I didn’t swallow too much of it and breathed every three strokes to even out chances of salty mouthfuls. Sometimes a wave would carry me higher than expected and my arm would find a second of void on the way down. It was weird. We were now pretty far from the shore but still saw the buildings on the Marina clearly. Barry kept paddling between the four of us of the not-so-fast group, checking in on us. Had I been on my own, I might have worried, not really knowing where to go or what to do. But with a kayaker with us and a boat ahead of us, I felt as safe as possible and enjoyed the experience to its full extent.

I’ve done a few swims now at Treasure Island but the feeling of freedom does not compare with the “real Bay.” Outside of a wind-sheltered cove, we were at par with big oil tankers, coast guards and whatever wildlife was there. Above us, brown pelicans were soaring low, fishing for breakfast. To our left, Alcatraz Island. I couldn’t decide if it looked far or close but looking at it from the water was definitely different.

From time to time, Christine and I waited around observing big boats on the horizon, fascinated. On such occasions, we chit-chatted as naturally as around a camp fire. How are you doing? Fine, and you? Feels good. Sure. Did you see that bloat? Sure did. Eventually we were reminded that this was an A to B “swim clinic” and we moved along.

Fort Mason on our right. Barry paddled to us and told us to get to the wall. NOW. So we did. At first I swam diagonally but when I saw that I was being literally carried away by the current I drastically adjusted my course. If I aimed before the wall, I’d eventually make it after the wall. We made it and I was relieved.

At the foot of the pier, the fishing lines looked dangerously close so we steared clear from them. Fishermen eyed us with interest. The neoprene wetsuit kind of fish, yup, a school of those. The pier’s reinforced concrete pilings weren’t too inviting and we followed them reluctantly until the lagoon opened, then made for the beach. There. Just under an hour. I felt exhilarated. Judging by the look of the others on the beach, they were happy too.

As a reward, we walked to Green’s inside Fort Mason and devoured a fruit scone with vanilla rooibos tea. Can’t wait to do it again.

2 thoughts on “Swimming in the Bay: St Francis Yacht Club to Aquatic Park”