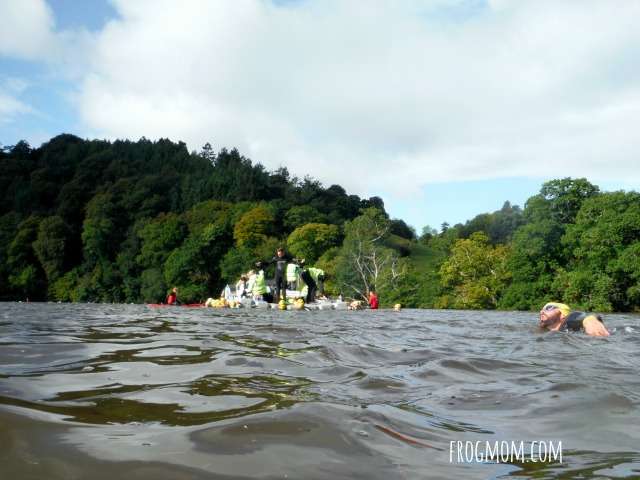 This year marked my third year swimming the Dart 10K, a now iconic British open water swim that takes swimmers from the quaint town of Totnes, down the river Dart, to Dittisham in Devon. While my first year was a discovery swim, the second one was one of acclimatation to the landscape. By the third year, I knew what to expect almost every stroke of the way and focused on enjoying the sights, as any swimming tourist would. I also took my waterproof camera along to document the swim, which forced me to slow down a bit as it required two hands to operate. For your pleasure, here is the Dart 10K, 2017 edition.

Why Tides Matter With The Dart

As the two previous years, I registered in the Leisurely Wave, the most popular wave for slower swimmers. Others registered to swim in Medium, Fast or Elite waves. I didn’t realize it then, but having discussed it with people in the know, the choice of wave impacts the duration of your swim. As the river Dart is a tidal river from Totnes downstream, you can get the start or the peak of the tidal flow, enjoying more or less tidal assistance to carry you down the river. I bet that some swimmers are strategic about this and with some sailing or tides knowledge, time their swim for the best tidal boost. 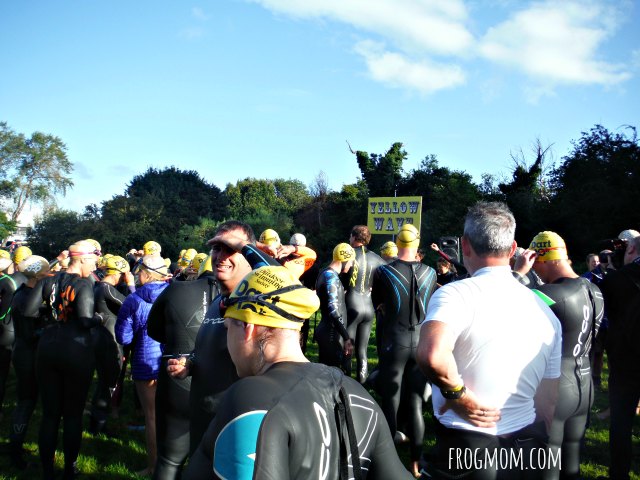 On the day we swam, which was Saturday September 9, 2017, high tide was due to occur at 9.05am which was exactly the time that the Leisurely Wave was planned to enter the water, thus giving better traction to later waves. The following day, high tide was planned for 9.43am which would have given tidal an advantage to the Fast or Elite waves, as the Leisurely wave started at 8.30am, followed by the other waves in speed order, 20 minutes apart.

Having said that, I love a good tidal push. The flow of the tide felt really strong once we were half an hour in and it kept pushing us nicely to the finish.

Year round, I swim without a wetsuit regardless of the water temperature but the Dart 10K is the only swim for which I wear my wetsuit. Quite a few of my friends from the Serpentine Swimming Club are seasoned cold water swimmers who fear nothing (except wetsuits) and swim the Dart 10K in ‘skins,’ meaning with only a swimming costume, goggles and hat. 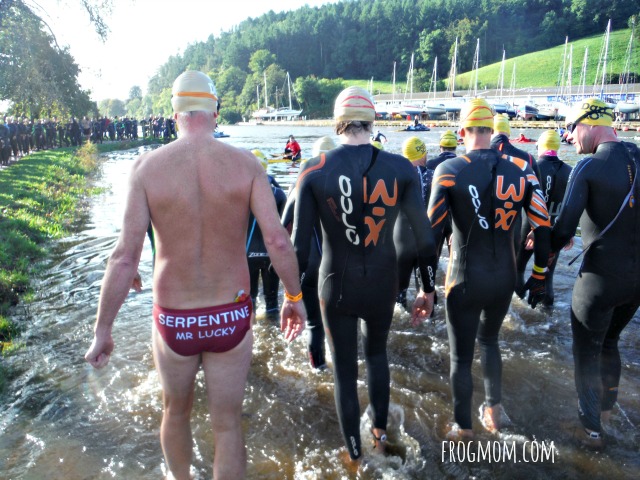 For the record, the water temperature was around 14C/57F at the start this year, which means that they were committing to a 2+ hour swim in pretty cold water without the warmth of a wetsuit. Respect, you brave skins swimmers. I’m not able to do that but I admire you who can. 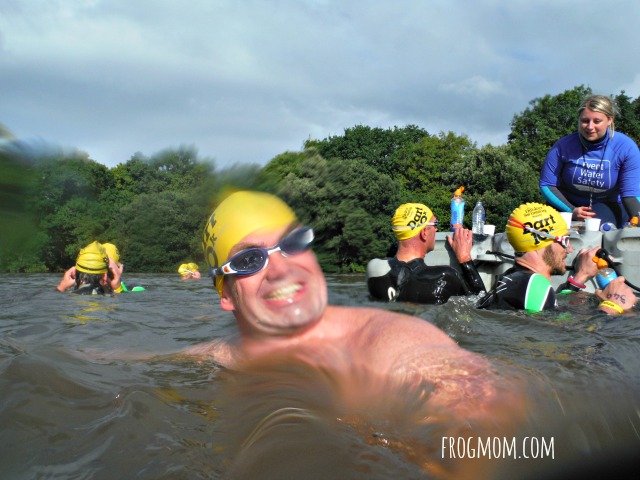 Here is another one of these skins warriors. I took his picture just as I was leaving the first feeding station and he gave me the biggest grin ever, apparently loving it. I followed him almost all the way to the end but I stopped a few times to take pictures and lost sight of him in the last 2 kilometers. If you recognize him, please show him the picture. He might like to see it.

Every open water swim has its landmarks and the Dart 10K is no different. If you listen to the briefing at the start, you’ll know to look for the Cormorant Tree, the white rock, Sharpham boat house and Bow Creek. I’m choosing to single out the Cormorant Tree because it’s the first landmark you pass as you swim. It’s also easy to spot and you’re both fresh and alert at that point. Not far from the start, in a lush countryside that’s greener than green, the Cormorant tree stands out as a lone dead tree that cormorants use as a perch. It’s on the right hand-side of the river and its branches proudly stick out above the reed beds. 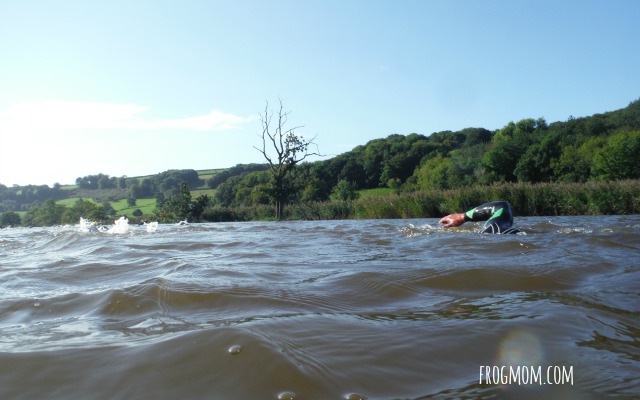 The tree is such a landmark on the swim that last year’s swim was the Cormorant Dart 10K, a name that was printed on the celebratory tin cups. 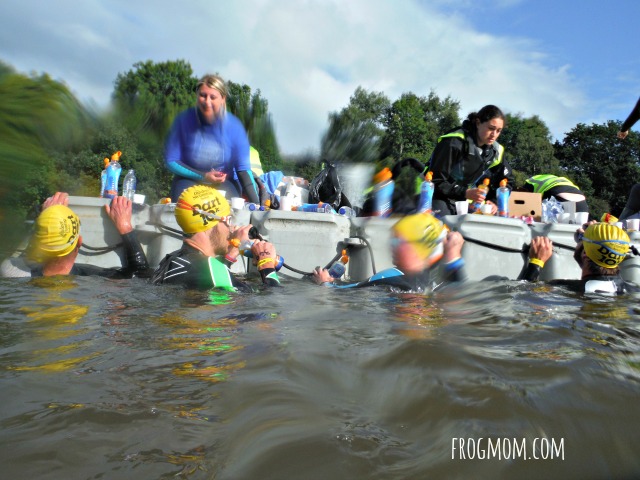 This year, I knew that I liked fruit gummies and with no shame, stuffed my mouth with as many gummies as I could. The funny thing is, I never eat sweets at home, but it seemed like an occasion to celebrate and I didn’t refrain. My healthy streak protested and I washed it all down with half a bottle of water, before swimming on. 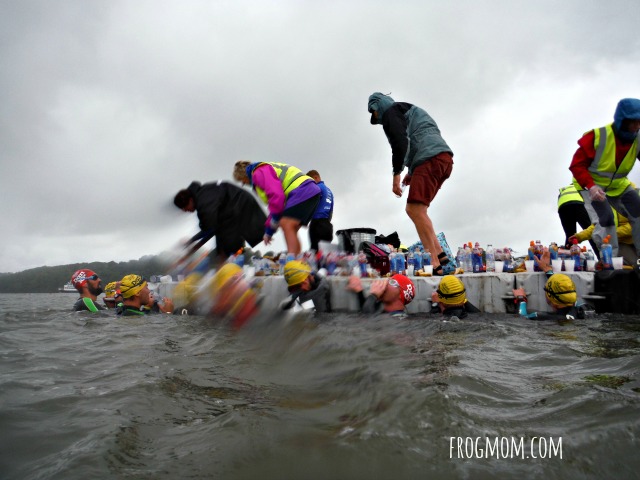 I almost missed the second feeding station as we were already in the mouth of the river, enjoying a good tidal push. Kayakers signalled a bit late that we should swim towards the left to find it and I struggled to change course. Suffice to say, I literally crashed into the feeding station, pushed by the very strong tidal flow. My husband, who preceded me by 20 minutes, completely missed that station and didn’t even realize it.

Quickly, I grabbed a raft handle and went on a second gummy binge. This time, my mouth had been in increasingly salty water for the past hour and a half and I appreciated some sweetness. I even drank a full energy drink, sweet as hell and chemical-tasting but that didn’t matter. It was sweet and sweet was what my body was craving. By then, the water temperature was a very nice 16C/61F and we’d swam over half of the course. All we needed to do to crack on.

For most people, the final stretch of the Dart 10K is the longest. It may not be the longest in distance, but it sure feels like it. You’ve been giving it your all, you may be starting to feel it in your muscles and the finish isn’t far. It could be beyond this bend of the river. Wait, no. Beyond the next bend, then. Hold on, wrong again. This is the part where you bypass Dittisham Mill Creek and make for Higher Gurrow Point. Hey, is it raining now? 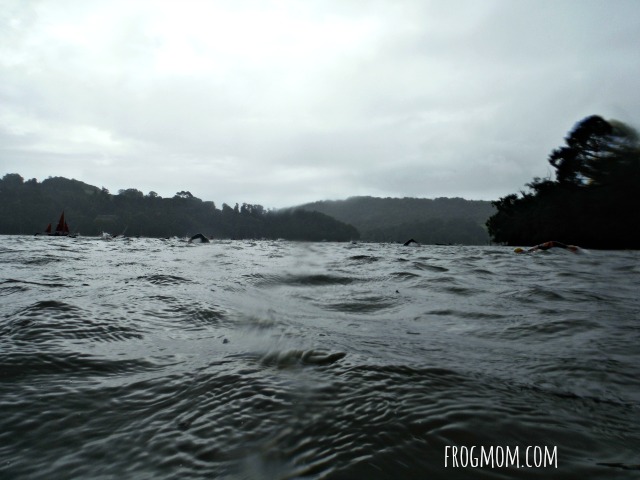 Indeed. It rained at that point but I barely noticed. I was focusing on keeping a steady stroke rate, eager to arrive and enjoy my well-earned hot chocolate. In fact, the only thing I could think about when it rained was how wet my girls would get, waiting for me at the finish. I hoped that they would take shelter in a tent and swam faster, so they wouldn’t get wetter than necessary. 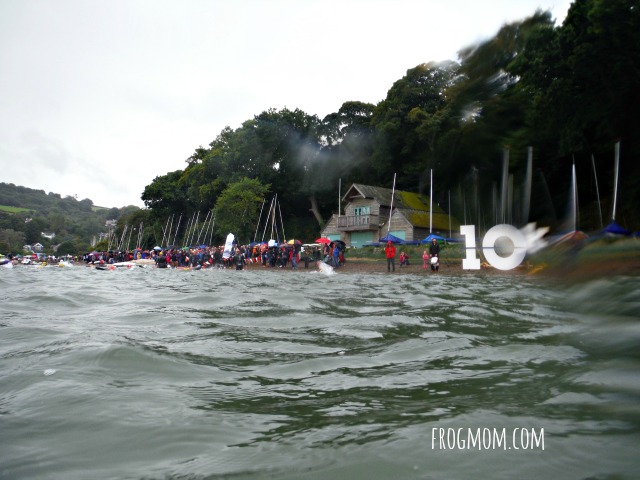 And then this happened–the finish! From afar, I wasn’t 100% sure that it was the finish but it sure looked like a load of people huddled together (families and friends). Also, kayaker and swimmer density was getting higher and I could tell that many swimmers sprinted for the finish. I would have sprinted too, except I managed to pull my camera from behind me to take a picture of the glorious white 10K sign. Sweet, right? 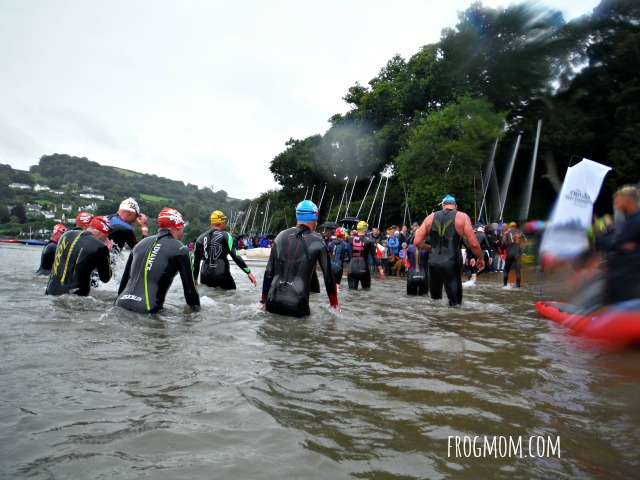 Like fishes learning to walk on their gills, we all exited the water and in the rain, followed a wet carpet to the tent area where we removed our timing chips. It was very orderly and all wetsuiters were waiting in line. Only skins swimmers, eager to be dry and warm, bypassed the line entirely and walked fast. After this, came the moment I had been waiting for all along.

The ritual hot chocolate at the end of the Dart 10K is a symbol as good as the swim itself. It’s not the best hot chocolate in the world, but it’s warm, satisfyingly sweet and mostly, heart-warming. It makes you feel really good and shows that you’ve done it. You’ve actually 10K, or rather 7 or 8K depending on the tide. 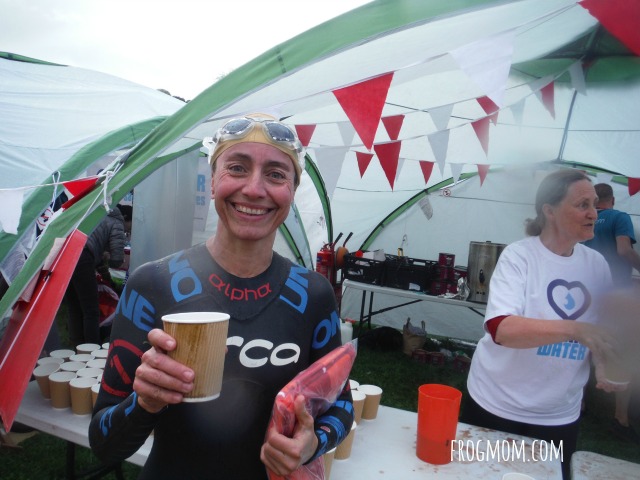 As you can see, I have the tell-tale grime beard and moustache that comes from swimming in briny waters. It’s both classy and a symbol of riverly courage, a darkish layer that shouldn’t wiped before exhibiting it to others. I also wear the golden hat the rewards ‘Dart 10K veterans’ who’ve completed the swim 3 times. This year, it came with an invitation to pop by the Outdoor Swimming Society HQ tent for drinks and crisps. Fizz time!

Before that others were waiting–my husband (still in his wetsuit) and my 12-year-old daughter, as well as speedy swimming friends. Before hitting the OSS HQ tent, I took them to the Dart 10K giant frame for a souvenir shot and we had fun fitting in the frame. 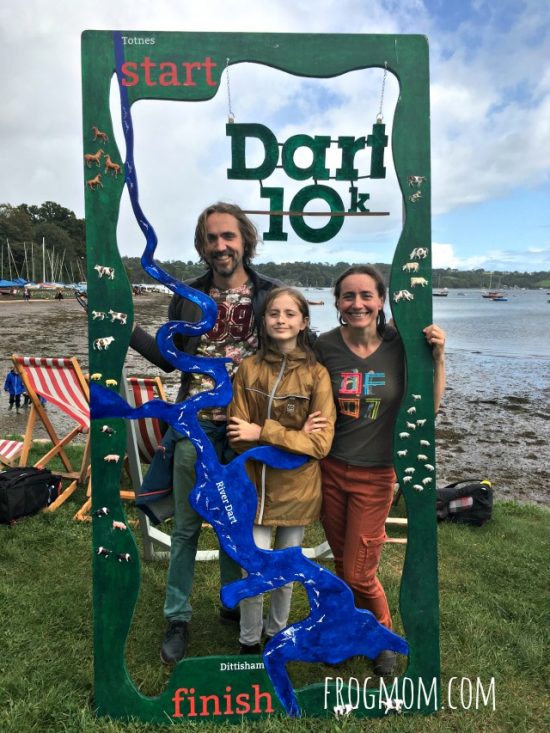 After the frame, we made our way to the OSS HQ tent where I was able to toast our swim with our friends from the Serpentine Swimming Club and champagne. 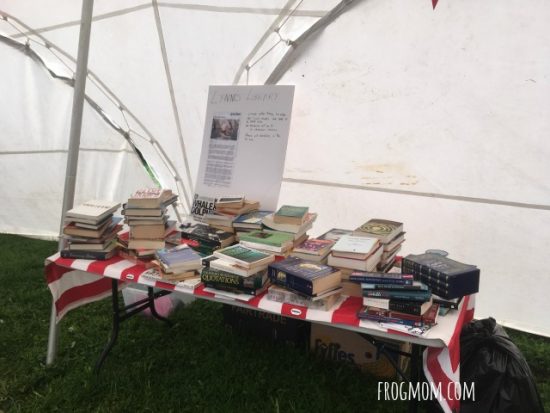 A lovely thought, there was a table about Lynne Roper (Facebook name, Lynne River) who was a fierce advocate of wild swimming, a friend of many OSS swimmers and who sadly died in 2016 at age 55 of a brain tumor. Her memory is very much alive at OSS events, most of all the Dart 10K, as she was a Devon child and loved showing people around her favorite swimming spots on the Dart river (cue, Sharrah Pool). There was another friendly surprise in store for me. 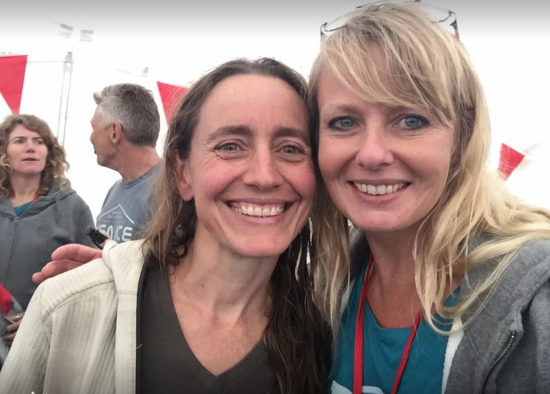 After corresponding by email and Facebook many times, I finally got to meet Vivienne Rickmann-Poole, amazing wild swimmer and artist, as well as Kate Rew, author, journalist and founder of the Outdoor Swimming Society. We didn’t get a chance to take a picture with Kate but this is Vivienne and I. 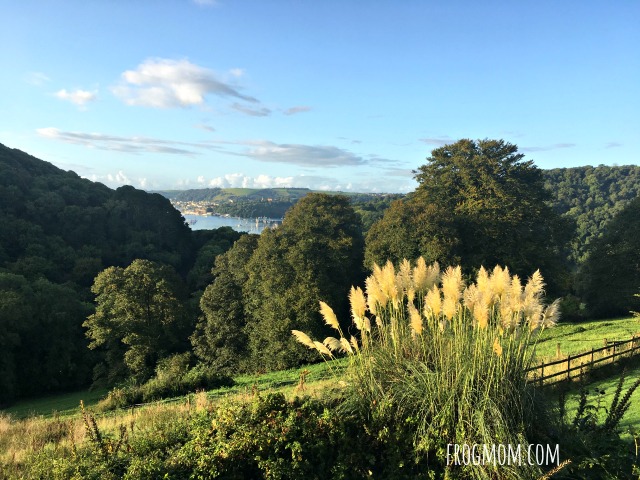 After the swim, we took a ferry across the river to Greenway and walked up the hill to the house of a cousin of our friend George, where the view on the river invites hours of bucolic contemplation. Or a double dip down in the river. Or nettle foraging for culinary experiments. Or silly parlour games. As you do.

This, in fact, summarizes the Dart 10K spirit for me.