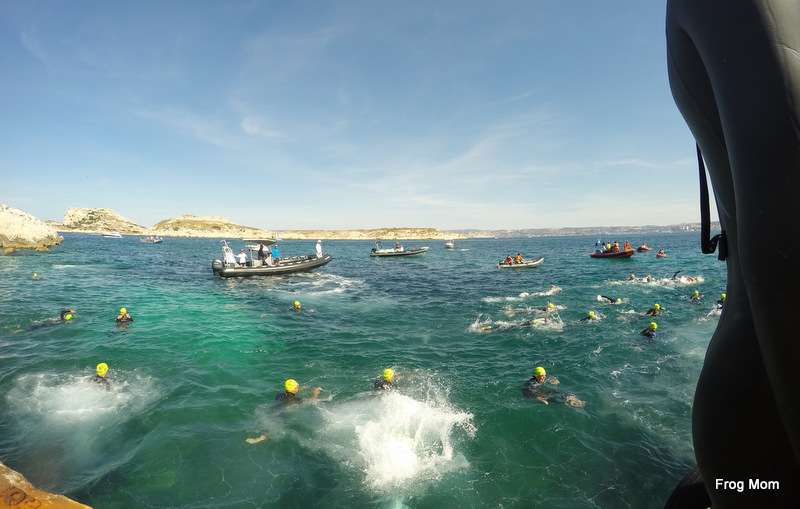 Swimming the Defi de Monte Cristo is on many swimmers’ bucket list, if only for the magnificent setting in the city of Marseilles and the romantic tribute to Alexandre Dumas’ Count of Monte Cristo book. The event runs over two days in June, featuring a swimming with fins 5K on Saturday and a swimming without fins 5K on Sunday – plus a few smaller events. I completed the 5K open water swim without fins and while it was tough – 5K is some distance, cold – I swam without a wetsuit, and long – I’m a slow swimmer, it was really great. To make this a true family event, my brother swam in the race with fins on the previous day, my husband swam without fins with me, and my girls waited on the beach reading comic books under an umbrella while their parents treaded water. Here are snippets of an exceptional event. 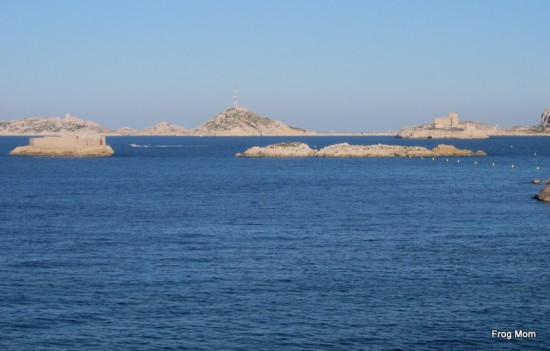 The Defi is named after Alexandre Dumas’s book, The Count of Monte Cristo, and celebrates the bold escape of its protagonist to freedom. In the book, Edmond Dantès (also known as the count of Monte Cristo) is unjustly sentenced for life in the mighty island prison of the Chateau d’If. To escape, he switches places with a dead prisoner in a body bag and is dumped at sea with a dead weight. Only thanks to a small knife and his wits does he manage to cut open the burlap bag and swim away into the night. What a dramatic escape! In the above picture, the Chateau d’If is the fortress in the far  right corner. Built in the 16th century, its high walls are connected by three towers overlooking the sea and the city of Marseilles.

The morning of the race, my husband and I headed to the village around 8.40am. Though the timing chips could be picked up from 7.15am, we saw no point in waiting around listening to music blasted around the tents. Based on the previous day’s experience when I’d waited for my brother, I knew that boats would shuttle swimmers to the Chateau d’If between 9 and 10am and that the swimmers wouldn’t start in the water until 10.30am. Obviously, there was no rush in getting the chips.

At 8.45am, we listened to the safety briefing and got confirmation that the race was going ahead, despite the previous night’s adverse wind conditions. That was a relief, given that we were all ready to go. In the changing tent, a woman was applying some kind of lubricant on her shoulders. She offered to share when I asked what it was. “It’s milking grease,” she said, “the kind that you use to grease cows’ tits before milking. Works wonders!” And so for the first time ever, I applied milking grease to my swimsuit straps!

Transfer by boat was an easy 20 minutes that seemed to stretch for longer. Actually the longer it went, the more the swim back looked like it would be a long one. I, for one, was trying crafty ways to attach my GoPro to the back of my swimsuit with a utility strap found in our rental house’ garage. Swimmers around me looked incredibly dubious and while I knew it would stay put in the back of my cossie, I hoped it wouldn’t rub on my backside.

Once on the pier at Chateau d’If, my husband and I looked for a spot to wait for the start signal. Should we roast in the sun and stay cool in the shade?

We opted for the shade, if only to avoid a temperature shock when we would get in the water. Wait, what was that? Unreal. Can you spot the guy urinating in the sea from the pier in this picture? That’s what you get for drinking too much water before the swim. One less for the wetsuit!

At long last, roughly 30 minutes after our arrival, the last boat docked with the last batch of swimmers and 5 minutes later, a voice announced that swimmers should get on the start line in the water. My husband, a much better swimmer than me, jumped in and joined the crowds at the lineup. From underwater, this is what the start looks like (photo by my extremely talented friend, Alex Voyer and his partner in crime, Alex Roubaud). A mighty pod of swimmers mostly in rubber. Pretty cool, right? 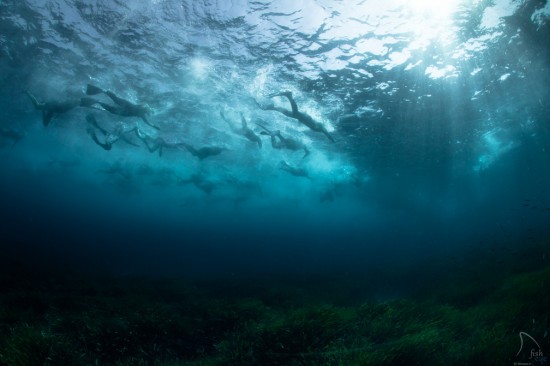 Back on land, I was weighing my options. Since I was looking at a long cold swim, I waited until the very last minute – after the start signal had been given – to get in. Time to go!

Rather than jumping (and losing my goggles straight away), I followed a few swimmers in “skins” to a prudent rocky approach to the sea. A woman in “skins” gave me a friendly pat on the shoulder and wished me good luck. From non-wetsuit to non-wetsuit, it was a note of encouragement that was well appreciated and I reciprocated. Luck we might need, or rather, mental stamina. A few seconds later, I was in the water.

The water was a translucent turquoise blue, clear at the beginning but it quickly turned opaque as the water churned around the islands. To visualize the itinerary, here is a map of the swim course.

On the map, it looks quite straightforward. Like in Peter Pan, directions could have been, “first island to the right, and straight on til the red buoy.” From the water, it was quite a different matter. In fact, sighting was made tricky by the swell that made the buoys difficult to spot from the surface. I snapped a shot of the first buoy, only 200 meters away. See how small it looks? And that’s when the water was calm. When the swell rose, sighting became second thoughts after swimming through the waves.

While the water had been warmish next to the Chateau d’If, I was swimming through layers of cold and warmer water. It was like going through a temperature sandwich. Warmish, colder, warmish, hold tight, colder.

I concentrated on my stroke and seeing as I was bringing up the rear of the swimmers, I didn’t have to worry about avoiding too many other bodies. A guy stayed on my right handside almost stroke for stroke, although his style was more of a stop-and-go-very-fast than my one-speed style.

I was expecting the first buoy anytime now, but as I couldn’t see it from the water, I decided to follow the escort boats and kayaks. At least, these were visible. Only a few hundred meters from the Chateau d’If, they started “fishing out” people. Literally, it sent chills up my spine. Would I be next?

This was the last photo I took with my GoPro. After this, I swam past the Sourdaras islands and entered a nasty cold spell. It felt like someone had left the window open on a drafty winter day. Oh, I felt much colder than I had anticipated and much earlier than I had anticipated too. That wasn’t su ch great news. All these hours swimming year-round in the Serpentine and recently at the Tooting Bec Lido, for no good?

From that point on, I didn’t warm up until the finish. Rather, I tried not to think about how cold I was. It was tough at times because every so often, I would breathe and catch a glimpse, from the corner of my eye, of an escort boat nearby. Oh, how nice it would be on board with a survival blanket on my shoulders, how warm and toasty. But swimming skins had been my choice and my personal challenge. I would stick with it, whatever happened. What really kept me going was the thought of my girls smiling on the beach. Ultimately, I didn’t want to let them down and preferred a late arrival to no arrival at all. I wanted them to be proud of their mom.

Swim, and swim, and swim. Schools of small fish darted to and fro at the bottom. Rocky bottoms alternated with dark sea grass patches, and were followed by darker depths for a long while. I tried not to rely on land sights as I was going much too slow for my taste and it felt like they were frozen in time. The thing was, I couldn’t close my hands because of the cold and both my thighs were cramped because of my being so tense. Needless to say, I was quite inefficient in the water.

Finally, I turned around the final red buoy and almost cried but thought better of it. We wouldn’t want to mess up visibility in my goggles now, would we? 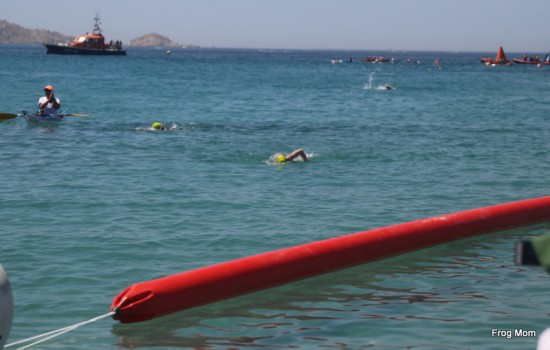 This is me arriving from afar. The kayak guy who’s clapping is the same kayak who stayed close by during the last mile. Without that guy, I might not have made it. He was a real star, providing words of support and encouragement. The water was warm now. I was able to close my hands. 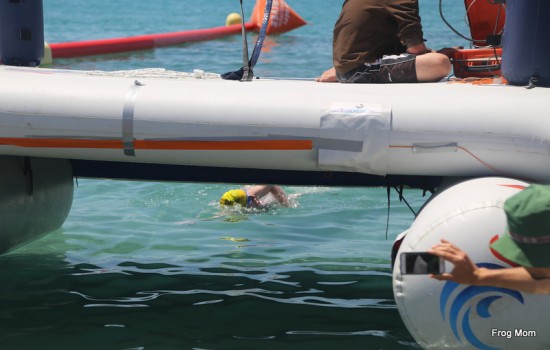 I glided under the grey inflatable raft where you have to lift your hand out of the water for the timing chip to stop the clock. And that was it. I touched the sand with my fingers. Done! I stumbled twice and got up. 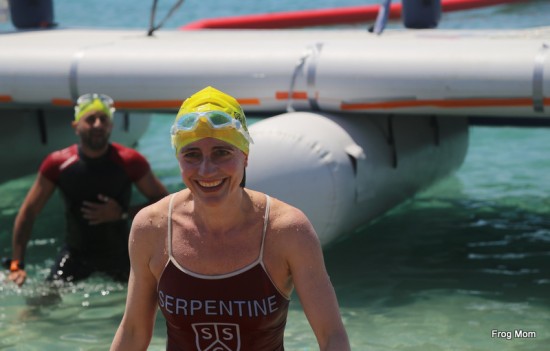 Ironically, my girls were not part of the cheer-leading crew but my brother was filming with his iphone (feet in the water) and my husband was taking these awesome pictures. I found my girls reading comics on the beach! Good girls, they came to kiss and congratulate me, then went back to their reading. Kids, I tell you.

After 2 hours and 16 minutes, I was mildly hypothermic but not to the point that I needed help. With my English Channel relay experience, I knew the drill and so did my husband. Remove wet swimsuit, cover up with dry layers, lay in the sun, shiver for a bit, done. I might have shivered too much for some bystanders who called firemen to the rescue. What a surprise when I saw three firemen walk up to me and offer to take me to a tent for an IV! Geez, that was extreme. I was already better and declined the offer, wondering how an IV could have fixed anything at all.

For the record, I was number 651 out of 658 swimmers. A pretty bad score but I did not arrive last and I finished what I started. Yippee! My husband was number 290 with 1 hour and 30 minutes, much better than me.

As a bonus, Marseille is a great city to visit with kids. After the swim, we enjoyed some well-deserved sightseeing, local ice creams and a glass of local white wine!

If you plan on swimming the Defi de Monte Cristo open water swim in the future, make sure to train in cold water before the race. About 70 people dropped out of the 5K and I heard many people bring up the cold as a reason.

Last but not least. A huge hug and thanks to my friend Alex Voyer who organized this weekend for 20 people, letting us know when to sign up and organizing accommodation for everyone. Check his wonderful photos and stories on the Red Bull website, he’s a contributor. You can see his recent work here and here.

Have fun and swim away!