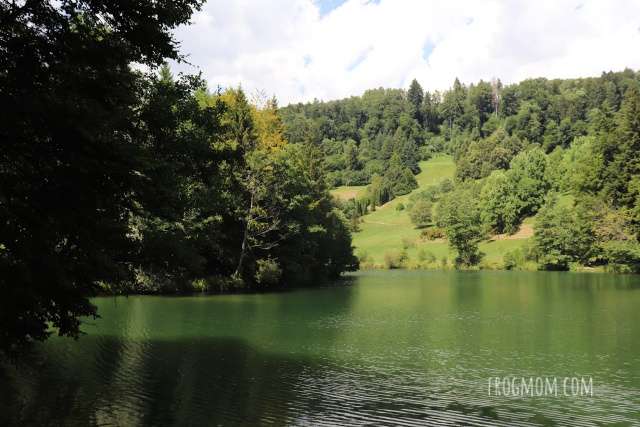 A stone’s throw from Lake Geneva, up in the hills where mountain streams flow free, the Arboretum National de la Vallée de l’Aubonne offers a lovely day out for tree lovers between Lausanne and Geneva. I discovered this park looking for things to do around Lausanne with my 9-year-old nephew and we had a great day there with both him and my dad, walking through themed woodlands, marshes and waterscapes. Nature in Switzerland is truly beautiful.

Arriving right before lunch, we crossed fingers that the arboretum would feature a cafeteria because the website was a bit fuzzy on that topic. We were also hungry, breakfast being an early morning memory. Much to our relief, one of the two first signs was “Buvette” which literally means fast food and drinks! Staffed by two volunteers, the buvette offered a short but pleasant menu of omni and vegan food served in glass jars, as well as ice creams and cold drinks. 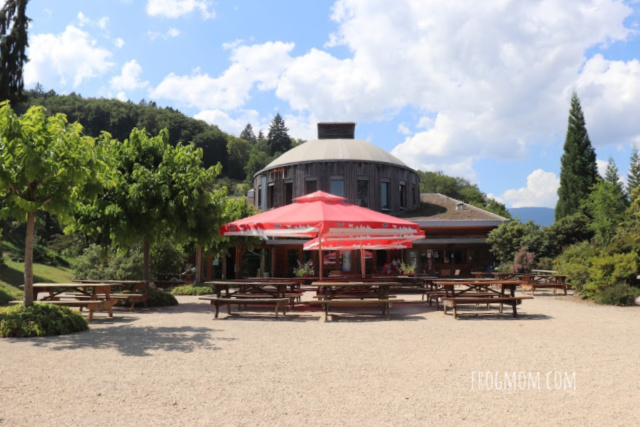 I must say, it’s the first time that I’m served a lentil and quinoa salad in a glass jar and it was great from an environmental perspective. If they could lose the plastic cutlery, that’d be even better. As there was no drinking fountain and I wanted to avoid buying bottled water, I simply picked up two empty plastic bottles from the recycling bin and after rinsing them, filled them in the bathrooms. My nephew was a bit taken aback but took to the idea of re-using ‘single use’ plastic bottles quite quickly.

After lunch and ice cream, we bought tickets to the arboretum. Only adults pay, kids are free which is great, and the woman behind the counter offered to store my nephew’s scooter and helmet during our visit as paths were too rocky for scooters. She then advised that we start with the Japanese Forest as it was shaded at that time of the day and would offer much-welcome coolness on a sunny summer day. 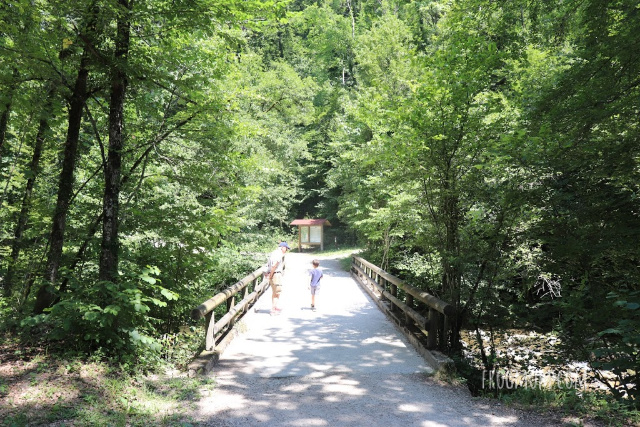 Off we went, eager to feel transported to Japan in Switzerland and wondering how the forest would change. As the arboretum was planted on 200 ha of mixed woodland between the late 1960s and the 1990s, it took advantage of existing woodland and the trail went through a mature deciduous forest before reaching a stream, River Aubonne and forking off to themed forests. The three themed forests were

Personally, I find the concept of themed forests really cool and was looking forward to our Japanese-inspired stroll. Navigating between horsetail-lined elevated walkways and Japanese cherry trees (albeit, neither in bloom not in glorious fall foliage), we discovered the Japanese Forest. 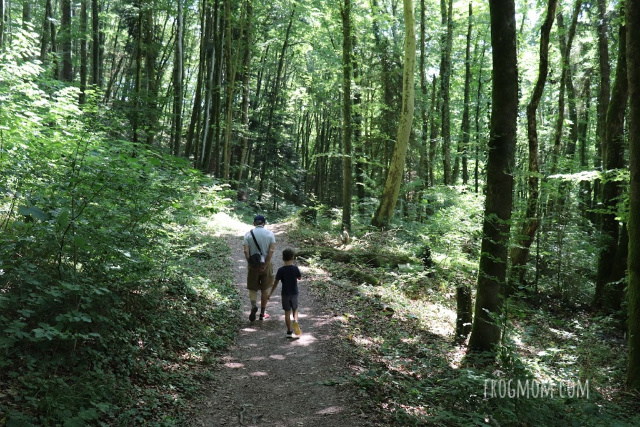 Sure enough, we soon spotted a bamboo grove off a side trail but it was to come on our way back and before that, we passed many Japanese species or plants common in Japan including cedars and Douglas firs. 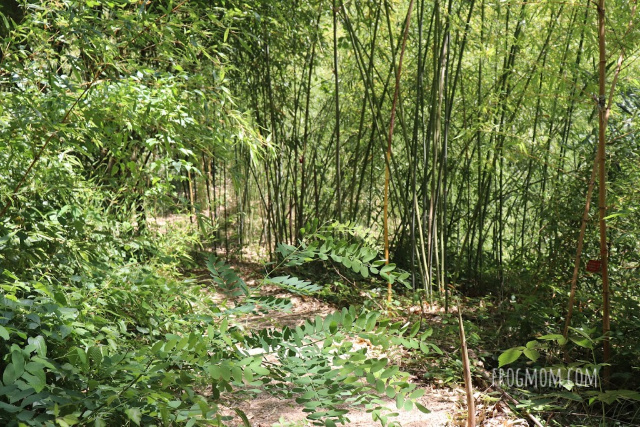 The Legend of Mice and Douglas Fir Cones

If you tell this story at the foot of a Douglas fir holding a strategically intact Douglas fir pinecone, kids (and adults) around you will love it and I guarantee they will remember how to ID a Douglas fir for the rest of their lives. This is a Native American myth I included in my California hiking guidebook and it’s one of the best plant-based myths I know. Note that there are many variants including fox or forest fires as protagonists instead of Coyote.

Long, long ago there lived mice in the forest.

Mice were fearful all day and all night, for the sly coyote always tried to catch them. Whenever Coyote slept, mice had fun teasing Coyote and dancing around o on him which made Coyote very sour when they woke him up.

Mice were very clever and were able to hide from Coyote for a long, long time but one day, mice let their attention wander and before they knew it, Coyote was wide awake ready to eat them up!

Very scared, mice ran off as fast as they could but Coyote was faster. Frantically, they searched for a place to hide.

They spied pine cones that looked big enough to hide in, so they scurried inside. The mice survived Coyote’s wrath, and to this day, if you examine a Douglas fir cone you can see the tails and tiny feet of the mice sticking out of the scales of a cone. 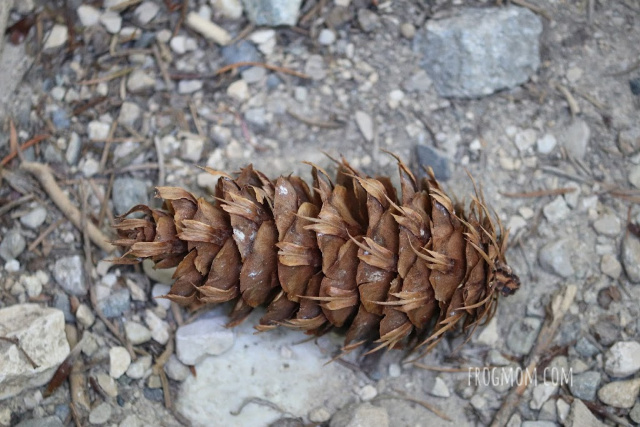 My nephew, for one, really enjoyed this story and asked whether he could pull a mouse from one of the pinecones. I had to discourage him from pulling the poor things from under minuscule scales:)

This being Switzerland in summer, we found many wild strawberry plants on the trailsides but none were fruit-bearing as this was too early in the season. I did show my nephew the shape of wild strawberry leaves on the hills but he was clearly doubting that these were real strawberries. 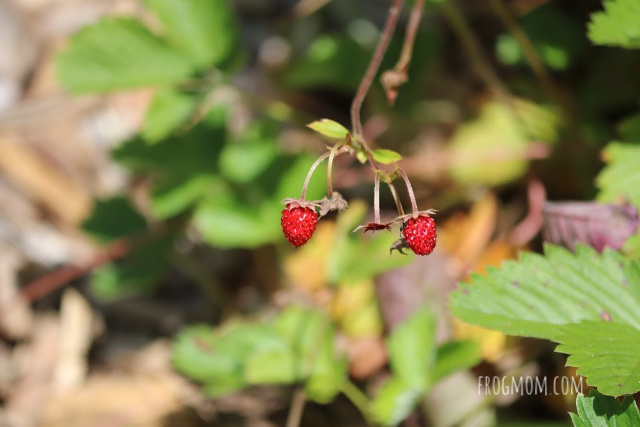 That’s until we found two ripe wild strawberries hanging from a lone plant in full sun.

Nephew (intrigued): “These are wild strawberries?”

Nephew looks closer and steps back.

Nephew (unsure): “Are they naughty?”

Nephew: “Are these naughty strawberries? You said they were wild.”

It would be awesome if wild strawberries were unruly rock stars of woodland floors but no. Besides, they taste great so there’s that. Finally convinced, my 9-nine-old nephew tasted a wild strawberry at the arboretum and immediately remembered he’d tasted them before.

After the Japanese Forest path, we went uphill on the Wild Wood path which took us to marshes and a magnificent view over the lake. Now, this ain’t a real lake. This decorative and very artificial lake was created by damming the River Aubonne and in the process, the arboretum’s founders were also able to create a pond that we saw mostly invaded by pond plants.

We refilled our water bottles at a spring-fed fountain flowing through hallowed wood pipes and walked down the hill and over a bridge to reach the lake. Water features are always very relaxing in green hills and this one was no exception. 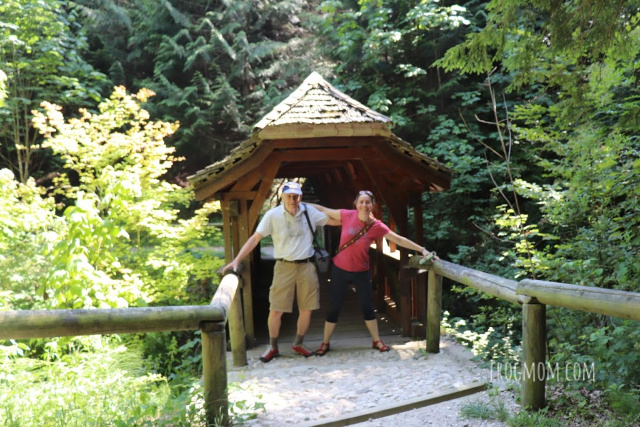 We walked all the way to where the River Aubonne feeds the lake and over a relatively narrow part of the valley, walked on a storybook-themed covered bridge that invited more storytelling but I had no fancy bridge story to tell. We took a few goofy pics with my dad.

At the end of our walk, we returned to the Buvette/Shop and I insisted that we visit the Museum of Wood if only for a few minutes as it could be interesting. 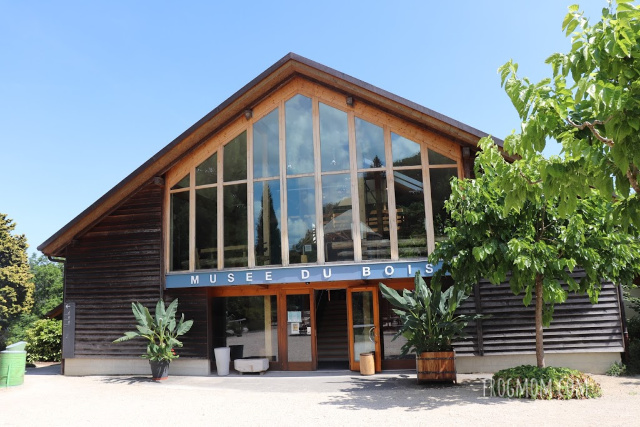 This is probably be a museum for woodcraft lovers as it hosts 1,500 artefacts – tools, examples of wooden items, illustrating what people did for everyday life before plastic was invented as well as craft work. My dad was thrilled by a wooden clogs display and he explained to his 9-year-old grandson that he used to wear wooden clogs with straw to school when he was a kid. My nephew, unfazed, concluded that my dad was probably born in the dark ages of horse cart travel and possibly, when cathedrals were built. 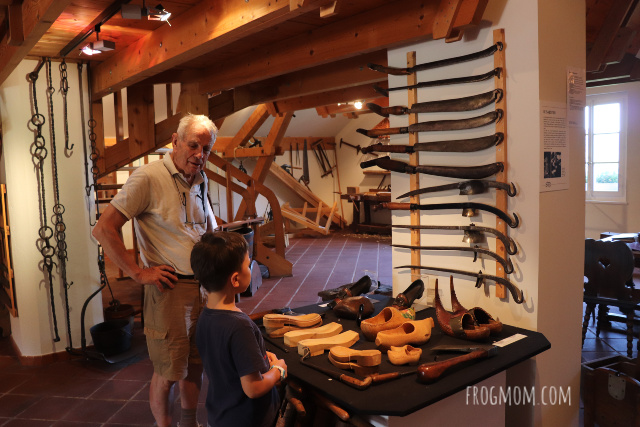 That concluded our day at the Arboretum National de la Vallée d’Aubonne, a hidden gem that makes for a budget-friendly family day out in lush surroundings. I can’t wait to return for the autumn foliage or the spring Japanese cherry tree festival.

Where to find it: Map