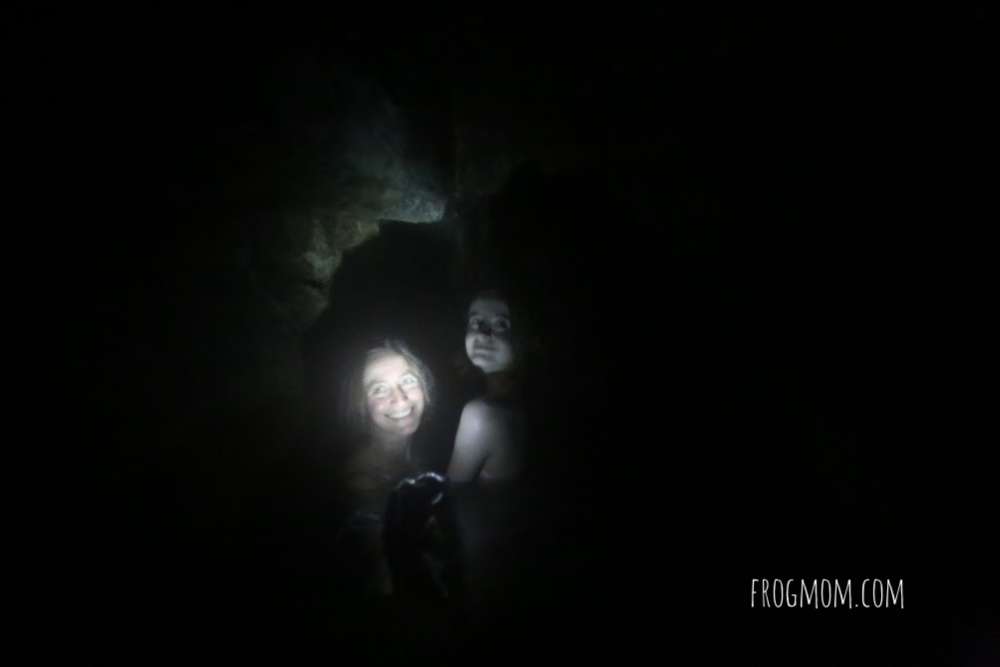 If my New Year’s resolution was to go out of my comfort zone in 2019, it’s already done. A few days after New Year’s day, when it was freezing all over Switzerland, a local friend took my family and his on a trip to a secret natural hot spring in the mountains. This was an outdoor natural hot spring untouched by humans as opposed to a fancy hotel with spa. Just a hole in the ground. “The hot spring comes out of a cave,” he said, adding that we might be able to swim through a flooded tunnel to another cave. Had he done it before? No. Did I have a waterproof torch? No. Were we interested? You bet. The following day, we set out with swimming costumes, swimming goggles and a big adventure ahead of us. 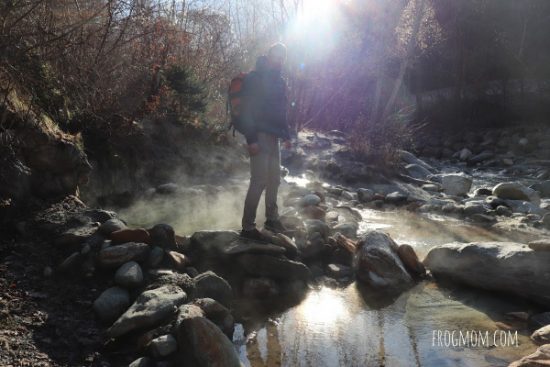 Since our friend had never been to this hot spring, finding it was going to be our first challenge. I was driving an 8-seater, with my husband at the front, our friend at the back, his daughters and ours – ages 15, 13, 12 and 11. On the way, our friend explained how tricky it was to find natural hot springs that were not commercially exploited in Switzerland. Most were run like spas and unless you were a caver, you never heard about the other ones. This one was natural and wild, hidden at the bottom of a narrow valley without signage.

We left the freeway, climbed up a steep mountainside, crossed a few villages and got on a small country road. Behind a jagged wall of mountains in front of us, we could see snowy glaciers.

“After the tunnel, take a sharp right and go down that road,” my friend said.

What road – this mining trail?

OMG. Get me a flying carpet!

Driving down that tiny mountain “road” probably cut my life expectancy by 2 full months. In all modesty, I consider myself to be a very good and a safe driver but this was nerve-wracking. Imagine driving a long wide minibus on a narrow single-track twisty mountain road, not paved throughout, with fallen rocks scattered on the ground (note to self – frequent rock falls) and dried mud slides (note to self – mud slides too). Add to that sheer drops, no railings, and icy spots. Winter in Switzerland, eh. Always practical, I prayed that no other vehicle was coming our way because there was no friggin’ way I was reversing.

After 15 excruciating and never-ending minutes, we reached the bottom. Phew. Alive. I parked the minibus near a frozen stream and literally jumped out of the car. For scale, here is a car for normal humans and by its side, here is the minibus I drove. 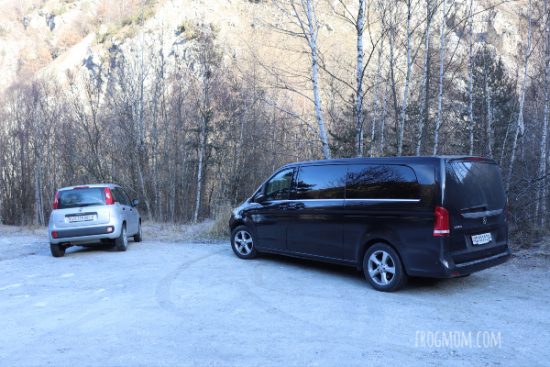 The girls got off the minibus, stretched their legs and all went ooh and aah over the iced mountain stream nearby. Indeed it was lovely, icicles hanging off dry grass and ice crystals sparkling even before the morning sun came out. Minus 2 Celsius/28 Fahrenheit outside. Hmm, the hot springs better be hot. 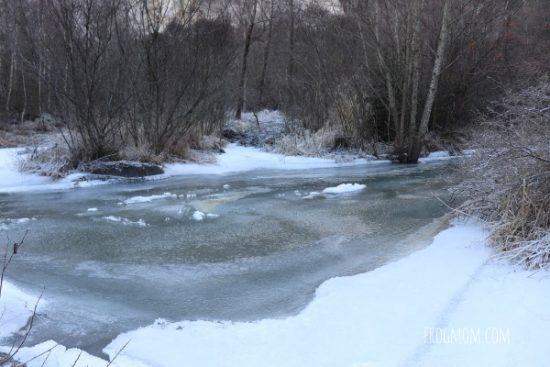 According to info we had, the hot springs were further down so we walked downstream, past a wooden barn with two horses in a field. If I didn’t now any better, I’d say the Switzerland Tourism Board had staged a somewhat rough rural scene for us and they did well. It was very authentic. 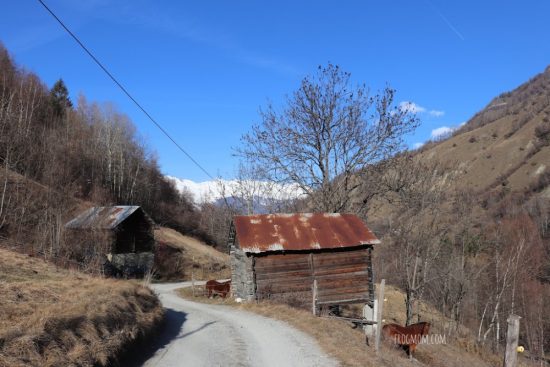 After the barn, we passed another mountain stream cascading from the mountain in white milky steps. It was completely frozen! 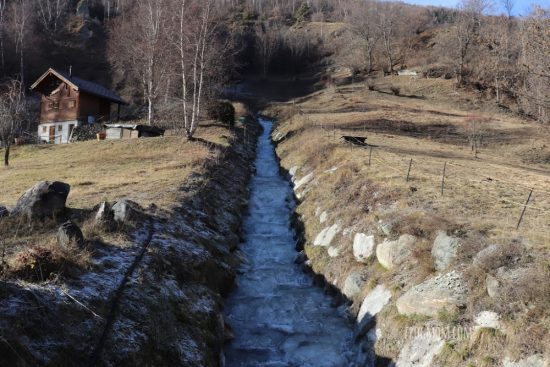 There was something strangely exciting at the idea of finding a hidden hot spring in a mountain with frozen streams around us. 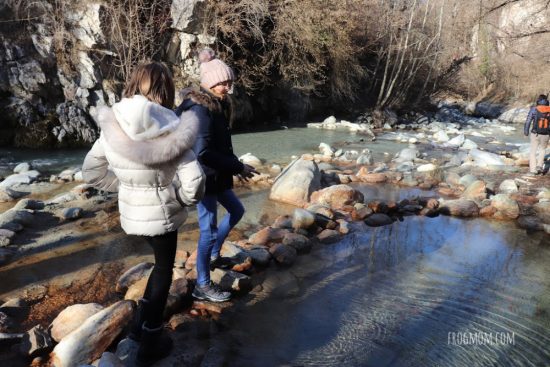 Suddenly around a bend in the river, here it was. If you look at this picture, you can see the clear steamy water of the hot spring in the forefront and the milky river with glacial runoff in the background. Side by side, hot and cold. It was quite extraordinary and we still hadn’t even started the real adventure.

“I’ll look for the cave,” announced my friend.

Sure enough, a few minutes later, he came back with a grin on his face. We picnicked by the river and hauled our bags to the entrance of the cave. Past the mouth of the cave, the ground went down in a slippery dirt slope to a naturally heated pool. It was pitch dark inside. Hurrah! 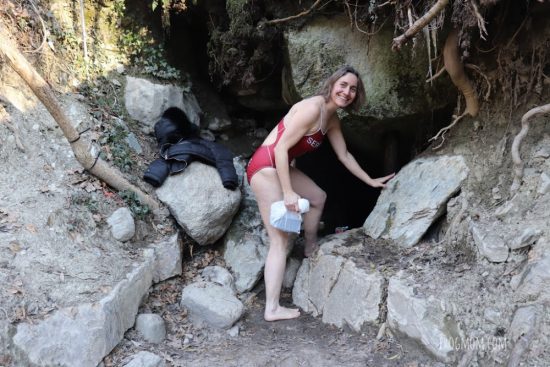 We changed into our swimming costumes and given the outside temperature, didn’t linger. One by one, four of us bent over and entered the cave to access the first pool. My oldest and my friend’s youngest kept us company by the side of the pool. I stepped in the water. Oh, it was nice but at 27 degrees Celsius/80 Fahrenheit, it certainly wasn’t bath or hot tub water like the thermal springs we’d visited in Iceland. It was a full 30 degrees warmer than outside which was still exhilarating.

“Let’s look for the tunnel leading to the other cave,” said my friend.

This room was perhaps the size of a medium garden shed and was shaped like a bean. One of its extremities was a tunnel going inside the mountain. I couldn’t see well enough in the dark but read later in caving reports that it was been carved by hand and explosives. Way at the back, where the water was slightly warmer, I could feel a cold leak in my back. Must be the other river seeping through the ground. There, we crouched in the water and my daughter sat on my lap. 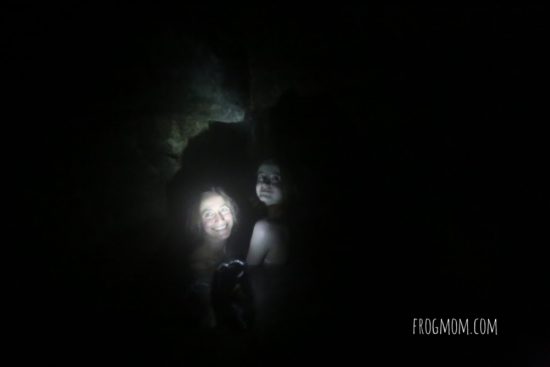 We felt an opening with our hands. Without any lights, this was a risky enterprise.

Before we could breathe, he was gone underwater.

My heart may have skipped a beat. It didn’t dawn on me until that moment how dangerous our adventure was. He resurfaced after less than a minute.

“It’s longer than I thought,” he said, referring to the tunnel. Trip reports he had read pointed to 1.5 to 2m (7-8 feet) of tunnel but this was longer. He went back under. His 12-year-old daughter was close to me and as time went by, she smiled nervously. “I love my daddy,” she said. “I hope he’s ok.” Me too, darling, I really hoped so too. It was now over a minute. He better be OK, I told myself, because I didn’t think I could rescue him. Finally, we saw bubbles at the surface of the water and he reappeared. We all whooped and his daughter jumped on him.

“I found it!” he said, excited like a child. “It’s not far and it’s so cool.” Mischievously, he had stayed in the other cave just a bit longer to give us a small fright. Mischievous miscreant! (And I’m being polite.) Now was our time to give it a go.

“It’s too long for the kids,” he said, “It might be dangerous.” Just us three adults would go. We were looking at 3 or 4m underwater, maybe more. “Less than 30 seconds,” he said.

“Get the rope!” I yelled to my oldest daughter. I’d suggested we pack a 30-m climbing rope because I suspected we might not be able to find our way back once we reached the second cave. Good thing two of the kids were dry next to the exit to go get the rope. 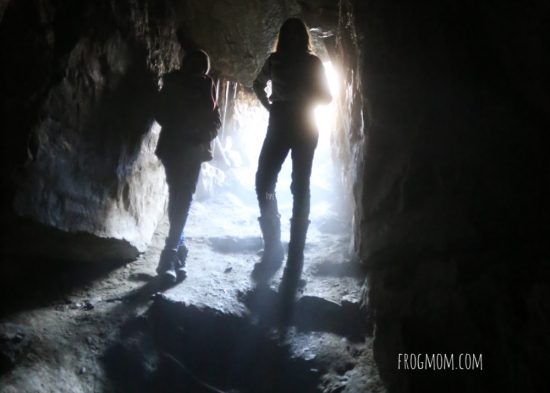 My friend attached the rope around his waist and went under. We had agreed that 2 pulls meant he’d reached the other side. Less than a minute. He pulled twice on the rope. I was next.

I put on my swimming goggles and dunked my head to check they didn’t leak. Fine. I took a long breath and went under in the tunnel, head first. Almost immediately, my back touched the roof of the tunnel. It was slanting downwards, the tunnel was getting narrower! In the dark, opening my eyes to no visible effect in this dark water, I panicked and came back frantically, my heart beating like a boom box.

“The tunnel goes down,” I said. My confidence had been shaken.

I tried a second time, this time feet first. I grabbed the rope firmly with one hand and used the other one to push myself forward underwater. I may have closed my eyes, I don’t know. In a matter of seconds, air bubbles escaped through my nose and I quickly felt panicky. I grabbed the rope with both hands for dear life and pulled myself outside, coming back.

I couldn’t do it. I was too afraid.

My husband was next. He went under. I held my breath. After too many seconds, he pulled twice on the rope. He was on the other side! I might have done a third attempt but then it dawned on me that I was the only adult this side of the cave, the only one able to drive the car, call emergency services or even take care of the kids. I stayed.

We felt the rope flow freely deeper inside the mountain. They were exploring another tunnel. God, how long was this cave? I was glad I had asked for a 30m climbing rope because this was giving us some sense of where they were. Two pulls. What did they mean – were they telling us to come? Two stronger pulls. Or were they talking to each other? We should have devised a better communication strategy. Clearly, two pulls was no universal language. The rope went taut again and then slack. Bubbles appeared at the surface. My husband came back, then my friend. They were both ecstatic. There was indeed another tunnel beyond the second room but they hadn’t found a third room. The girls were drinking the words of our two adventurers. This was truly fully an honest-to-God adventure. I was miffed that I was the only one who had failed but there was no going back now.

Another time, I told myself.

The combination of darkness, uncertainty on the distance, uncertainty on the terrain had been too much for me. I have a waterproof torch at home. This hot spring felt like unfinished business to me and I vowed to come back, though I might contact local caving clubs before so I’m better clued in on the underground topography. Also, we won’t risk our lives with four kids waiting for us. 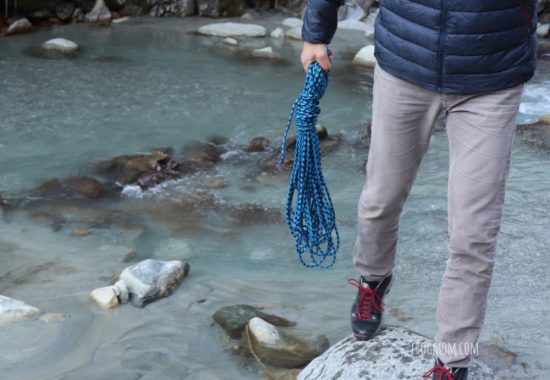 Nevertheless, this felt like a great adventure. We had ventured into the unknown. Wet and cold, we came out of the cave and dressed up in our dry clothes. By now, the sun had gone over the mountains and the valley was in the shade. We put the rope back together and spotted a man in a wetsuit soaking in the hot pool outside. Two other people were warming up their feet. They knew about the cave and initially understood we had gone with full caving gear – wetsuits, underwater lights, rope, helmets etc. Nope. Just swimming costumes and goggles. They shook their heads.

We felt like we had conquered a bit of the South Pole.

On the way back, the drive up the valley was a breeze. Fortunately, no other car came our way though I saw two other vehicles parked at pullouts.

Oh, the stories we told my parents that night. My girls were completely thrilled by their day. Oh, the nightmares I had that night, reliving my two failed attempts. That’s all right, I’ve come to terms with this now. You only learn from your mistakes, right? My mistake was not knowing that I could have panic attacks underwater.

Now I know and I have to deal with it.

Needless to say, if you felt inspired to try this on your own, please don’t. Caving without proper equipment or expertise is very dangerous.