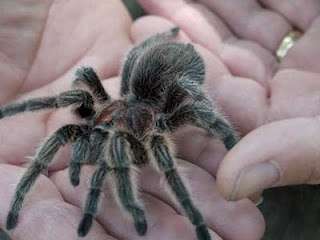 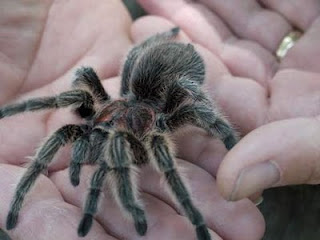 Back to school time is open season for tarantulas – for soul searching that is. If you’ve ever hiked the East Bay trails, you passed countless tarantula burrows without realizing it. Small dirt mounds with a dollar-coin size hole, they could be gopher hideouts for all you know. In fact, in their cool and dark underground room, male tarantulas are quietly waiting seven to ten lonely years until they reach puberty. When finally they’ve grown to adult size and wisdom, they only have a year or so to live until they starve to death. FYI, females can live up to 49 years so yes, it’s unfair. Speed-dating tarantula style starts. Male tarantulas go skittering all over the place to please the ladies. 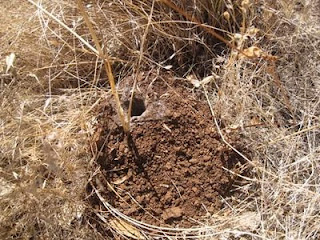 Tarantula hikes are a great way for kids – and their parents who’ve seen too many arachno-horror movies – to uncover the true nature of these prehistoric animals. Forget the bad rep, they’re sweet things who love nothing more than a cricket or two. You (the human) should grab your camera and watch in utter fascination as this mating ritual and drama unfolds at your feet. No screaming involved. Even if you have a serious case of spider phobia, you’ll get out of there with new respect for the hairy type. Kids simply love tarantula treks.

Two weeks ago, our family drove to the Bay Area mecca of the biggest creepy crawlies on earth: Mount Diablo State Park. Mount Diablo is such a popular tarantula hangout that people come from all over the place for the hikes organized by the Mount Diablo Interpretive Association. Think of this season as the ultimate hair-raising educational opportunity. 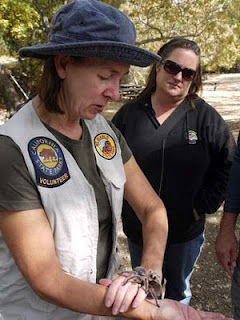 I happen to have a bad case of spider-phobia. Until recently I couldn’t even watch one on a TV screen. I’m better now but still won’t touch one. When I suggested we go on a tarantula hike, I viewed it as shock therapy with an opportunity to learn cool facts about the creepy crawlies. You know what? It worked. I’m not afraid of tarantulas any more. I know I’m very unlikely to get bitten by one, much less to be eaten by one. Look, I can even write about them without cold sweats.

The docent that day was a lovely woman called Helen who brought Isabella, her Chilean Rose pet tarantula, in case we didn’t see any on the trail.  She did well. We didn’t see any at all but we had our tarantula fix at the start of the hike when Helen told us a little bit about tarantula behavior, life cycle, diet and moulting. 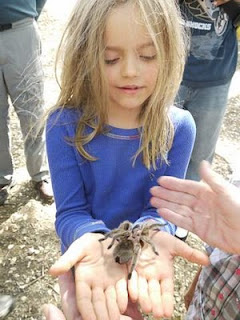 After Isabella appeared in her vivarium, my girls were transfixed by the graceful movements of the spider. She had a pink spot on the back – apparently typical for Chilean tarantulas – and crawled everywhere. My oldest one swore she didn’t want to touch it and told so to the docent three times. We got the message all right.

She would probably have stuck to her guns if another little girl hadn’t asked to hold the tarantula. She cupped her hands and stayed calm as Charlotte transferred from her owner’s to the little girl’s hands. She even started stroking its back with a smile. Ours couldn’t resist. Seconds later, here she was holding the tarantula.  It’s ticklish, she said. My husband tried too and said the tarantula was as light as a feather and very soft. I took notes in my notebook. Ticklish. Soft. Light.

The hike itself, around Mitchell Canyon, was an easy 2-mile loop with splendid views on the hills. I was surprised to see so many yellow and pink flowers on the trail. Sage was fragrant under the East Bay sun and the temperature was pleasantly warm. It was a great hike and though we didn’t see any wild tarantulas, some in the group were quick at spotting their burrows. 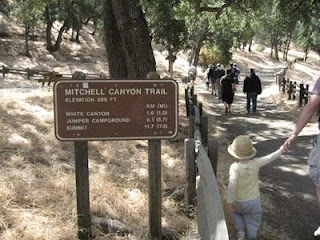 If you plan to go on tarantula hikes before the season is over, here is the calendar for October 2019:

Join us for an evening hike up Mitchell Canyon in search of the crepuscular critters that call Mount Diablo home. We’ll be on the lookout for owls, poor wills, bats, tarantulas, scorpions, and other denizens of the dark that hide during the day but shine (figuratively and sometimes literally) as the sun goes down. This is a 2-mile round trip hike with a few hundred feet in elevation gain.

Saturday, October 26, 2019: Halloween Trek – Mitchell Canyon Visitor Center
Halloween is just around the corner! Join us for a trick or treat trek in search of the flying, hopping, crawling, and slithering creatures that live on Devil Mountain. We’ll have a chance to meet the famous 8-legged diva, Scarlett O’Harry (a tarantula), prior to our walk.

Now you know everything. Do go, you won’t regret it. Even if you don’t go, remember to be nice and gentle to those hairy beasts on the trails. They have a heart too.

7 thoughts on “Tarantula Treks at Mt Diablo: Time For That Fuzzy Hairy Feeling”