If you thought that outdoor survival skills were only for hardy Bear Grylls types, you haven’t tried the marshmallow trick yet. When I told my girls that I was going to teach them how to make a fire without matches, they immediately thought “food.” What could we possibly cook on a fire? At home, we had mini-saucissons. Sliced, these can be skewered and grilled. But that wasn’t enough food. You get hungry in the wild. At the train station, we bought a bag of fluffy pink and white marshmallows and two bars of milk chocolate. I had already packed my fire-making kit (more on that later) and they picked up a free newspaper on a bench, because “what if the wood is wet in the forest?” That, in hindsight, was excellent foresight.

If anything, proper motivation is half the job done when it comes to outdoors fun and food is always a winner with kids. Plus, this activity is super easy, takes only 30 min or so and it’s a fun experience to try in the outdoors. 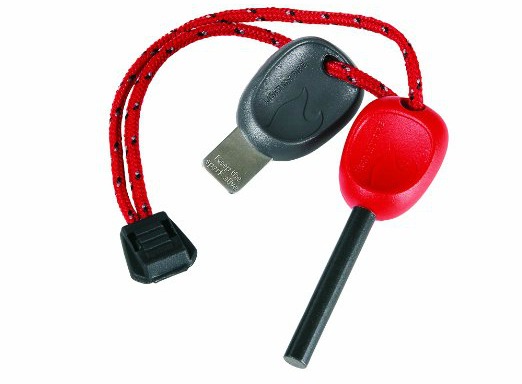 This is the fire starter kit that we used. Made of the magnesium, the firestarter includes a main magnesium alloy firesteel (red top) and a stainless steel striker (black top), as well as an emergency whistle (not visible on this picture but part of the black handle). As the reviews go, Light My Fire makes the best magnesium fire-starter kit out there and once you get the hang of it, you can ignite almost any type of tinder without ever needing matches. That’s great if you travel as you can pack this in your bags without safety worries.

I started with this. 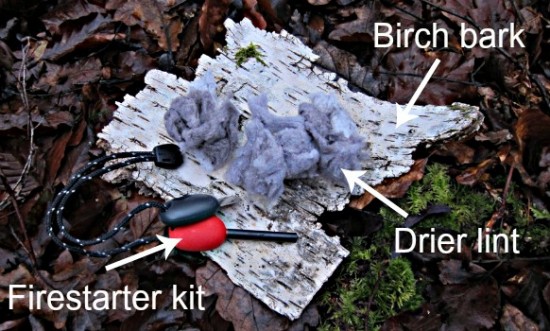 The drier lint came from home. Every time that I’d ran the clothes drier in the past month, I had scooped out the lint and saved it in a small box. You don’t see it on this picture, but I also had a newspaper nearby and my girls crumpled 3 or 4 double pages. The only thing we weren’t able to find in the forest was dry kindling or dry wood. It had rained so much the night before that everything was damp, wet and cold. In fact, it had even snowed in the forest that morning so a fire was exactly what we needed. Given the weather, good thing we had brought dry bark and lint with us.

Now, we were ready and piled a few handfuls of packed drier lint on top of the birch bark. The plan was to strike the firesteel until it created hot enough sparks so that the lint would catch fire. How does this work? This short video shows how the firesteel works.

It took us a few strikes to understand the angle at which we should hold the striker but the shallow thumb imprints gave us a clue. 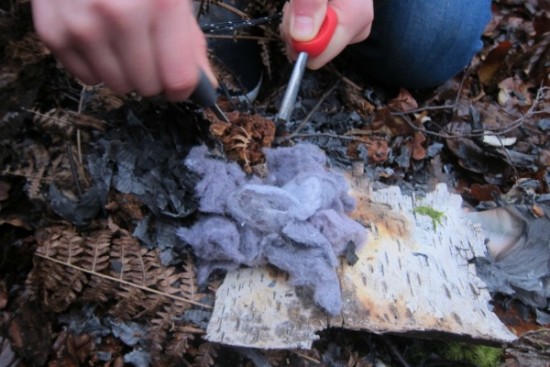 We spent a minute or two getting no results and looking at the neat dry pile as if staring was going to help. 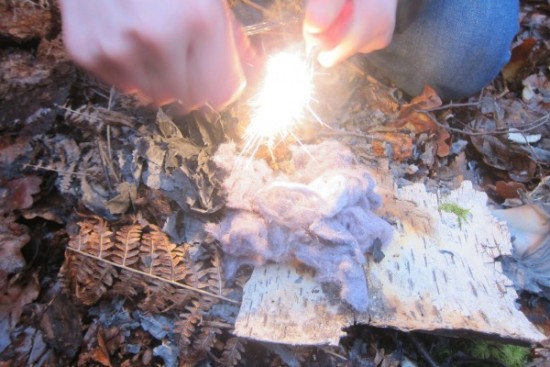 Finally, my daughter got a spark! She was thrilled and even though the lint was still intact, it was getting hot around her fingers. She could feel it. She kept at it, struck harder and closer to the lint so that the hot sparks would fly directly into it. 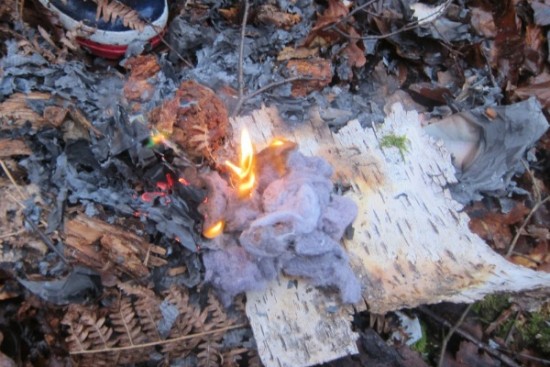 Tada! It was bound to work. It only took a little while longer than we expected.The lint caught on fire and burned real fast, but the wet kindling that we added on top just put out the fire. Lesson learned: wet kindling doesn’t work. So we piled drier lint again, struck a few sparks and it caught fire again. Except this time, we fed the fire with crumpled newspapers to increase the heat of the fire and get to bark to ignite. 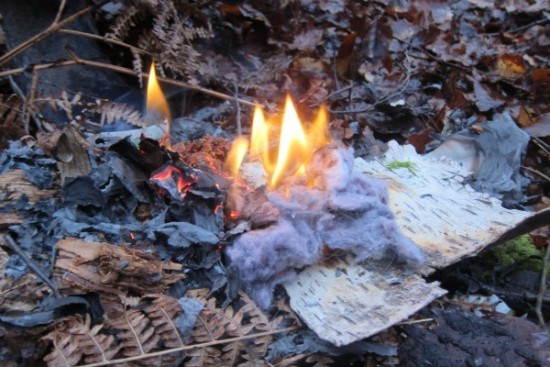 What you see on this picture is the lint and newspaper burning. Underneath, the bark was starting to burn as well but the fire was still quite weak. It needed more oxygen! My 10-year-old blew lightly on the flame and poof, it spread to one side of the bark. It was great to see how her blowing on the flame had really made a difference and improved the combustion. Eh, that’s physics in nature for you. 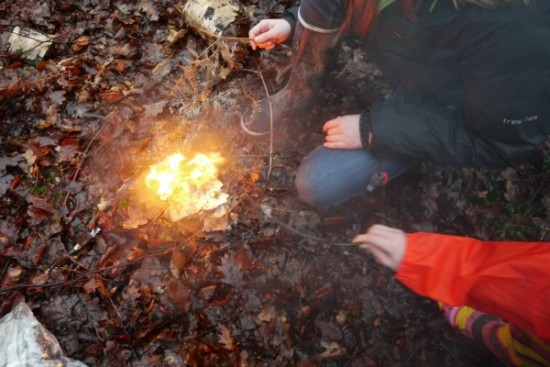 Look at this, we had a real fire going! It was even warm and we gathered closer to warm up our hands. This was way cool. We had to cook something. Quick. 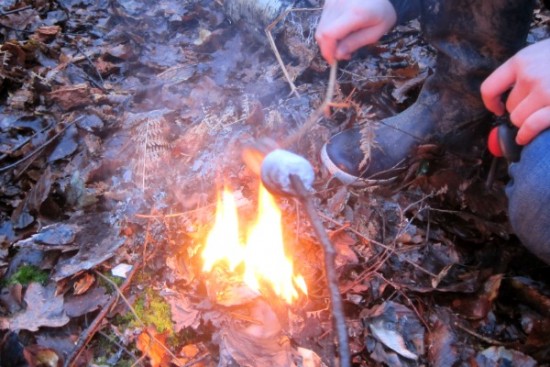 A minute later, the first roasted marshmallow was all gooey inside and slightly blackened outside. My 10-year-old swallowed it with a smile and asked for more. Truth is, we didn’t want this fire to get bigger as we were in a public forest and it’s not really legal. With all the wet leaves and snow around, there was no chance of the forest going ablaze but still. We wanted to be careful.

In the end, we only roasted 2 more marshmallows and called it a day when we saw a person walk her dog in the distance. With our rain boots, we covered the fire with wet leaves and it went out in a matter of seconds. There was hardly any trace of the fire. I was even able to salvage half of the bark as it hadn’t burned fully and put it back, once cold, in my backpack.

End of the experiment and success!

We were thrilled that we understood the process and were ready to try it again.

You too should try it with your kids. It’s one thing to watch an adventure movie where the hero rubs two sticks together, starts a sparks, adds dry grass and gets a roaring bonfire. It’s like magic, except it isn’t. It’s a lot more satisfying to start a fire by yourself without matches and know that you can do it.

What do you think, would you do it with your kids?