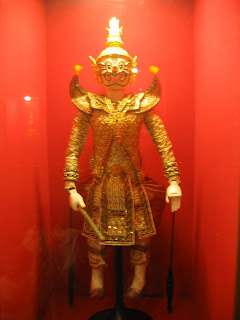 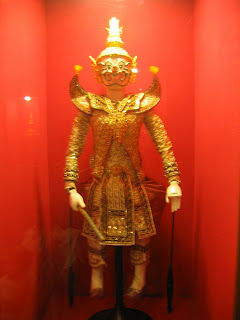 Whenever I see the word “puppet” on paper, my heart jumps. My girls love puppets and I’m all for live performances. When I read about the traditional Thai Puppets in the Time Out Bangkok guide, I decided to attend the next performance with my little misses. Basically, there are two theatres for regular Thai puppet shows. One is a school of Thai performing arts (the Patravadi Theatre & Studio), the other one is a theatre dedicated solely to the dying art of Thai puppets (the Joe Louis Theatre). I chose the latter.

The Joe Louis Theatre is named after a famous Thai puppeteer called Sakorn Yang-keawsot (Thai: สาคร ยังเขียวสด) who was nicknamed Joe Louis. He was a master of the hun lakorn lek (traditional Thai small puppets). In 1985 he founded the Joe Louis Puppet Theatre and since 2001, the theatre has been putting on nightly shows at the Suan Lum Night Bazaar. Suan Lum Night Bazaar happens to be ten minutes away from my home so it was easier for me. Unfortunately the shows start kind of late at 8pm, which I believe is normal in an adult world. However when you look at a form of art mainly enjoyed by children, you’d appreciate an earlier seating too. Never mind. 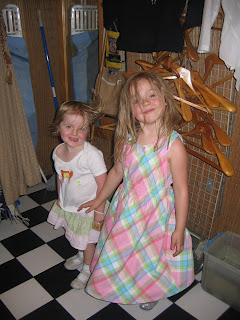 After a brief visit at the Queen Sirikit Convention Center to browse through the Thai Travel Fair, we arrived at San Lum at 5pm. Since the box office open at 6pm and I needed to choose close sitting for my girls, I preferred to be there on the early side. We got fourth row seats (beaten to the center front seats by a large group) and the cashier actually offered me a free seat for my oldest one, suggesting I take my younger one on my lap. At 900 Bath (roughly $28) per seat, I was very grateful.
Tickets in hand, we still had to wait it out because the show wouldn’t start until two hours later. Shopping! After all, that’s what Suan Lum Night Bazaar is famous for. It’s sort of a Chatuchak Market redux only at night. Clothes, shoes, Thai handicrafts, glasses, watches, light fixtures, framed scorpios: there’s a number of the usual tourist trap selection. I was looking for a long sleeved shirt so I was happy to find a small stall selling white cotton tops. Luckily for my sweaty northern climates girls, there was a fan too. Once they discovered the “seven year itch” effect of a fan blowing under a skirt, they couldn’t get enough giggles out of it. Eventually I got a shirt too and everybody was happy.
Sad to say, happy only lasted until starvation loomed on the horizon of 6.47pm. “We’re hungry! We’re thirsty!”. Time to hit the “food court”. The food section at Suan Lum Night Bazaar caters to everybody from beer-drinking Germans to middle-aged proper European couples via strolling Indian or Thai families. I almost settled for a cute biergarten under a larg 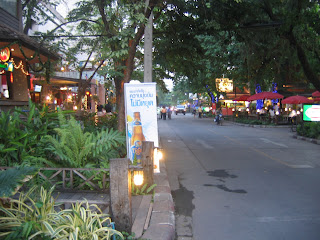 e green tree but the prospect of ants biting my ankles while mosquitoes were having appetizers on my legs seemed less than charming. Plus, at 6.47pm in a biergarten in Bangkok, everybody around you is drinking beer and it’s sort of odd surroundings for a nice toddler dinner. Therefore we crossed the street towards the restaurant of the Joe Louis Theatre. I’m glad we did.
The food was by no means outstanding. I ordered a standard khao pad moo (fried rice with pork) with gai ma-muang (chicken with cashewnuts) so there was nothing to scream about in the food selection. The drinks however made everybody happy. My littlest one had a freshly squeezed apple juice. My older one had a young coconut with a straw and a spoon (to scoop out the flesh – yum). I had a margarita. Yay!
By the time we got to our assigned seats, I thought it best to explain the plot to my girls before the show becau 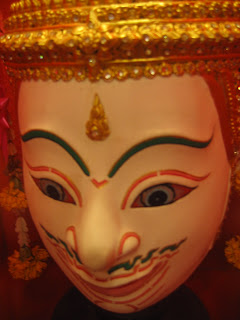 se subtitles can be confusing to read. The show featured the birth of Ganesh, a pretty complicated story with mean-looking demons forging alliances with Brahma to rule the universe and a decapitated boy, son of a powerful god but beheaded by him by mistake, coming back to life with an elephant head found in the jungle. I had never seen puppets like that, whose arms, legs and head are moved by three people dressed in black from head to toe – men for male puppets, women for female puppets. The performance was accompanied by a traditional Thai orchestra and five singers. For a moment I feared my girls would fall asleep. They did not understand the words sung in Thai and the minutely choregraphed moves of the puppets were not always self-explanatory to the outsider’s eye. But no. My girls were captivated by the story. I had to promise that we’d take a tuk tuk back home as an ultimate reward because they did not want to leave and I didn’t want to face competition for my transport back home. Five minutes before the end, we got up. Ganesh was about to win the battle between gods and demons. It was great. I’d happily return for another show.