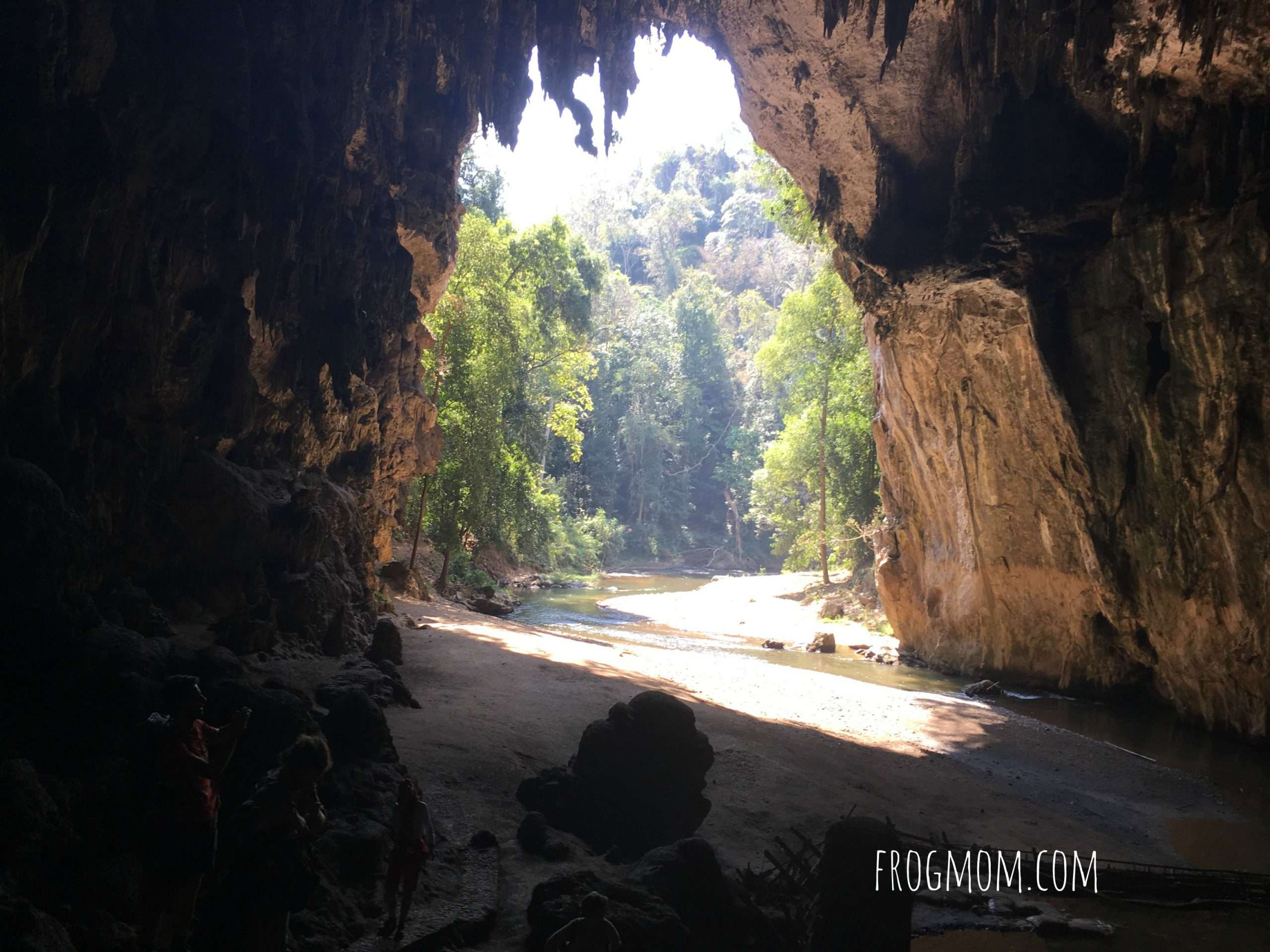 Tham Nam Lod caves, in Mae Hong Son province, northern Thailand, are the first caves I’ve ever visited in Thailand and I really liked them because we visited by the light of hand-powered gas lamps and via bamboo rafts on a river. In addition to stalactites and stalagmites, we also saw lots of fish, bats and a huge snake. Unlike most caves I’ve visited, none of the three Tham Nam Lod caves had electricity or anything modern, which was very much like Indiana Jones. My mother would say that it was atmospheric, which I did not expect from a Thailand cave tour but truly, it’s the most natural cave tour I’ve been on with guides. 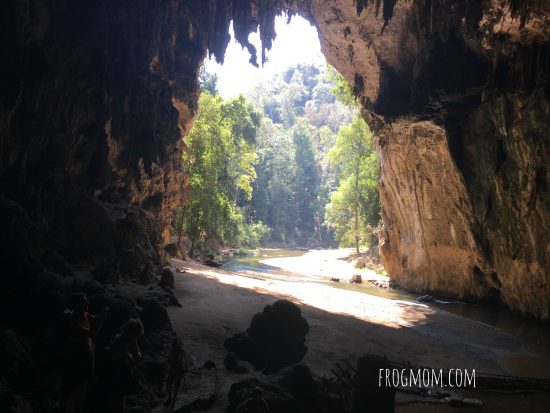 After getting off the Bangkok – Chiang Mai overnight train, we rented a car and drove six hours north to Soppong where we stayed overnight at a place called Cave Lodge. Very tired from so much driving, we had dinner in front of a fire, because the temperature was 15C/50F (very cold when dressed in shorts and light t-shirts) before being shown to our bungalows on the hill. 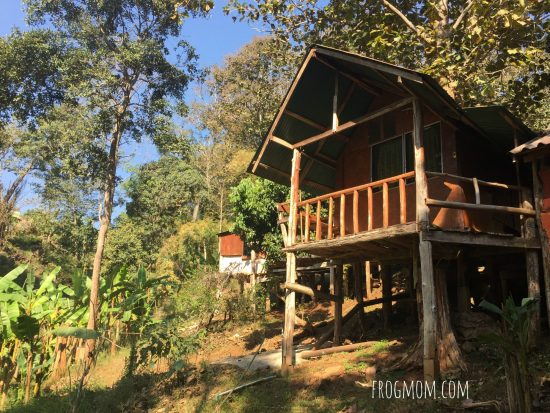 In the morning, we headed to a big common area outside with tables and benches where we had a breakfast of Thai rice soup, fresh fruit, pancakes, toast and porridge. It was all delicious but there was too much to eat (like, way too much) and as my young cousins (ages 6, 8 and 10) have a small appetite, my uncle helped clean the plates.

From the Village to the Caves 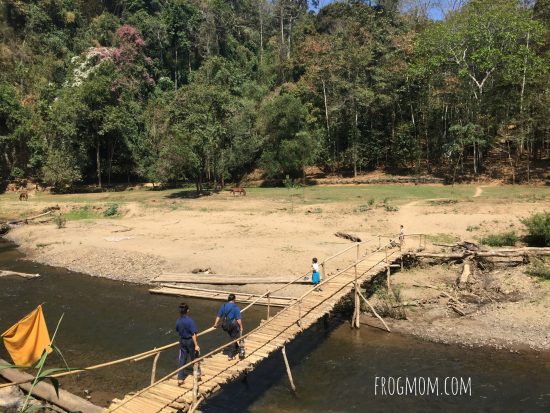 We left on foot from Cave Lodge and walked 15 minutes to the village of Soppong where our guides, two Thai women, were waiting for us by a couple of bamboo huts next to food vendors. Our guides spoke some English but not very much, so my uncle spent the whole time speaking to them in Thai and translating for us. From the village, we walked to the caves. No visitor center and no ticket office. There was nothing! The guides switched on their gas lamps, which I thought was very cool. I’ve never seen anybody use gas lamps before.

We were ready to enter Tham Nam Lod Caves, or as they are known, Tham Lod. Before getting started, we played a bad joke on my youngest cousin (age 6) and told him that rabid wild dogs lived inside the caves, but that he could scare them off with light as they only lived in darkness. As a result, he claimed a lamp for himself for the whole visit (a half-day) and hung tight to the guide.

The first cave looked like a wide opening in the hill with a river flowing in the middle. Beyond the overhang of the entrance, the cave was gigantic and its roof shot up 20 to 50 meters above our heads. 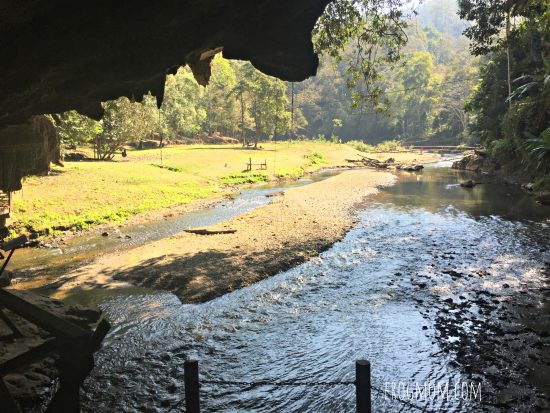 Without electricity, it was very dark and we didn’t see much at all, but by pointing our torch lamps up, we could see stalactites hanging down in ribbons from the cave ceiling. I loved that we couldn’t see the whole chamber as lighting was very limited. Mystery! 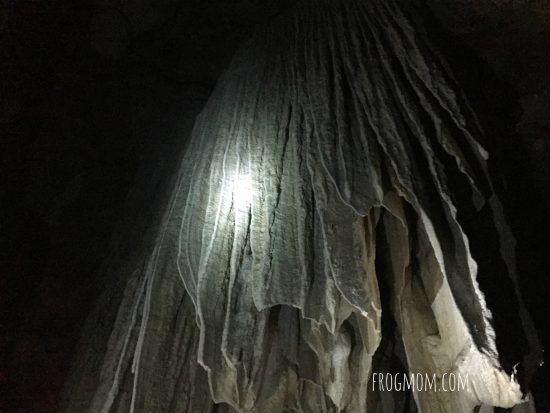 Inside the cave, it was colder than outside which, by Thai standards, is considered cold. I’m guessing 20-25 C inside versus 30-37 C outside. That’s quite a difference and of course, we layered up with sweaters.

In the first chamber, we saw the main attraction of that cave, a massive column (25 meters tall by 4 meters thick) in the middle. We also saw many ‘waterfall’ rock formations that sparkled by the light of our torches and were totally magical. 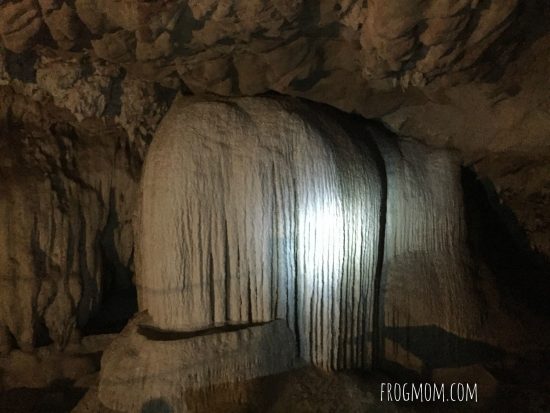 When the ground was too wet, boardwalks and wooden bridges were useful and the guide occasionally stopped to point out cool rock formations. For example, some of them looked like teeth, or frogs, or even crocodiles. These unique rock formations were protected by small wooden barriers and a few even had Thai/English interpretive signs. (I didn’t read any of the signs as we were in a hurry.) Visiting the first cave took us around a loop and after we’d come back to the entrance, we followed our guide over the river to access the second cave.

Then, a fish episode happened.

Before we met our guides at the village, I had seen lots of roadside vendors sell fish food but it hadn’t quite clicked with me until we reached the cave. 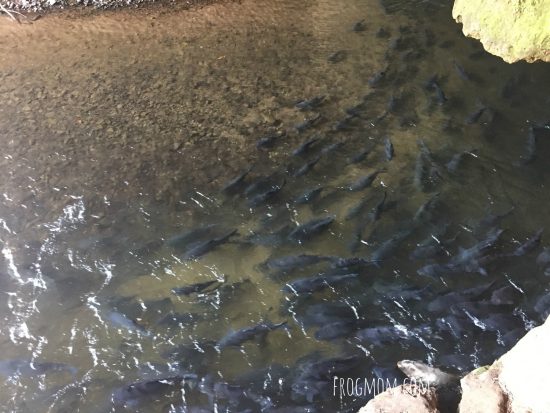 There were so many fish in the river! There were hundreds of them and they were big too, some as big as my arm. As we came out in daylight, the fish saw us and rushed to the surface to get fed. My cousins had bought fish food and started feeding them, which provoked a mad fight in the river. The fish were obviously used to being fed by tourists and loved it. My cousins loved it even more and for a while, stayed there without showing any intention of carrying on. Without the convincing skills of our guide, they would have skipped the rest of the tour.

Eventually, my cousins accepted that they’d feed more fish in the third cave and moved on. About time.

Before we walked up to the second cave, our guides told us to leave our sweaters and excess stuff since we’d come back after and the second cave was about 5 degrees warmer. We walked up a long staircase, being very careful since the steps were uneven and slippery, before arriving to the first formations. 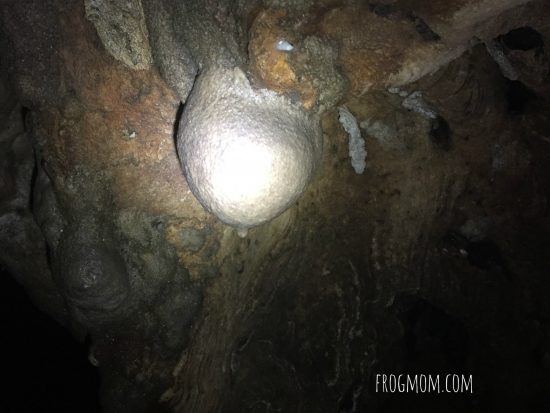 The most famous rock formation in the whole Tham Lod caves cave was a breast-shaped stalactite in the second cave and as you can see, it was strangely similar to a human breast. It was also about the same size. Interesting.

Have you ever been on a bamboo raft to enter a cave before? Well, I have and it was very fun. The guides split our group into two groups of four. I was on a raft with three adults and a guide while my cousins boarded another raft with my aunt and the other guide.

This part of the river was teeming with fish and what better idea than to feed the fish from a bamboo raft? My uncle and aunt suggested it. In seconds, all three children were dispensing fish food pellets which, of course, caused another massive fish fight in the river. Between my cousins who leaned dangerously over one side of the raft and the fish that started rocking the raft, the raft became very unsteady. The guide got very scared that they were going to tip over. She couldn’t swim! She called to my uncle for help and he immediately stopped the cousins, keeping them under control from afar. It was hard for me to believe that a grown woman couldn’t swim, particularly if she did this kind of job on the river. It must be so scary for her. 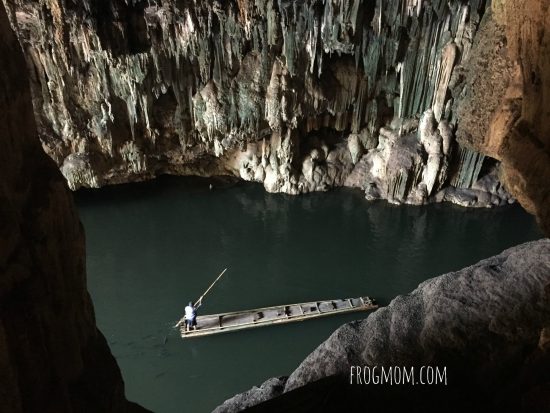 Once we reached the entrance of the third cave about 20 minutes later, the worst smell ever hit our noses. Bats and bat guano (poop) everywhere! It really stank. Eew. We thought it smelled like fish sauce (like, a lot of it) and were eager to leave it behind. We got to a beach, jumped off the bamboo rafts and climbed a staircase up the side of the cave. The handrail, like the uneven narrow steps (it was almost as steep as a ladder), was covered in bat poop so we strategically held the sides of the handrail by the tip of our fingers to avoid being covered in poop while still maintaining our balance. Tricky exercise.

With our guides leading the way with their gas lamps, going up the many staircases was very uneventful until our guide spotted a two-meter long venomous snake.

She called my uncle, completely freaked out, so he could handle the situation “like a man.” He works in ice creams, how would he know what to do? He had no clue but fortunately, another group came by and apparently, they knew exactly what to do. They discussed a bit and by the time they were ready for action, the snake was gone.

Coffins in the Cave

Our guide was very reluctant to keep going but we still went deeper and further inside the cave. It was, once again, similar to the two other caves except for a few “prehistorical coffins”, basically some old and empty wooden boxes. The guide told us that the bones of the bodies had been relocated elsewhere to be studied and displayed as historical artefacts. There was a dozen coffins and they were scattered on the cave floor in a fenced-off area.

We walked another 15 minutes until we reached the spectacular exit of the cave, with the bamboo forest reflecting on the surface of the river inside the cave. Unbelievably beautiful.

This concluded my first ever Thailand cave tour and we walked back to the village where we purchased sweet sticky rice cooked in bamboo over a fire. To eat it, we removed the piece protecting the rice and peeled off the bamboo like a banana. Cooked with coconut milk and sugar, it was a real treat and I highly recommend it as a snack to kids and adults alike. I don’t even like coconut (true) but I liked this sweet sticky rice.

As we left the cave around lunch time, there was a line of tourist groups waiting to start their tours and we were really happy to have showed up early so we could have the caves to ourselves.

This is me, by the way, your 12-year-old travel blogger. I hope you enjoyed this cave tour. More Thailand travel blogging coming soon. 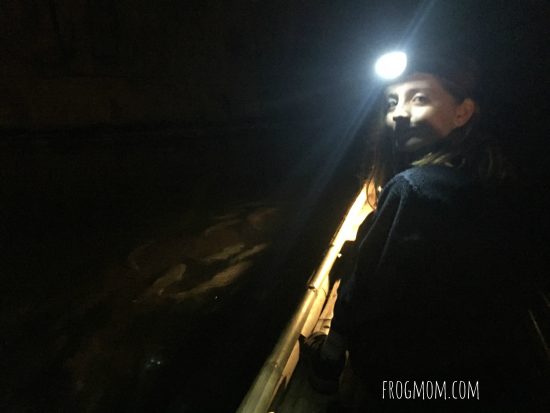 Where To Find Tham Lod Caves

You can find the caves here.