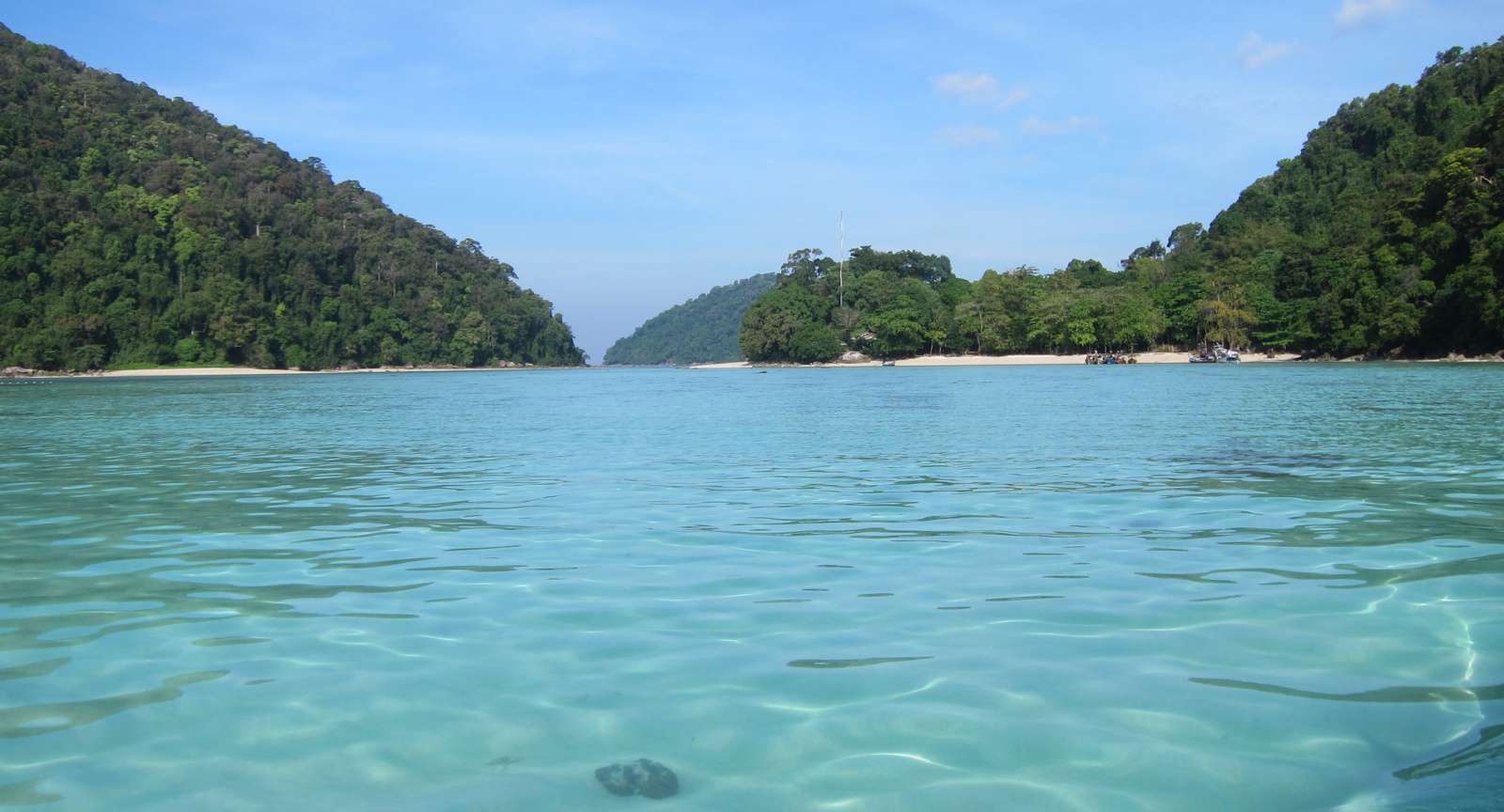 The Surin Islands, also known as Mu Ko Surin National Park, are an archipelago of five islands in the Andaman Sea, about 60km at sea from the Thai coast. I’ve visited these islands twice — once in February 2014 with my girls and the second time in December 2016 with my husband and my girls. I never really got to write anything about this place although these are by far my favorite islands in Thailand, both for the wildlife and for the people. Indeed, the Surin Islands are inhabited by the Moken, sea nomads who are natural-born freedivers and have roamed the Andaman Sea for thousands of years. This is a glimpse into island life at Mu Ko Surin National Park. 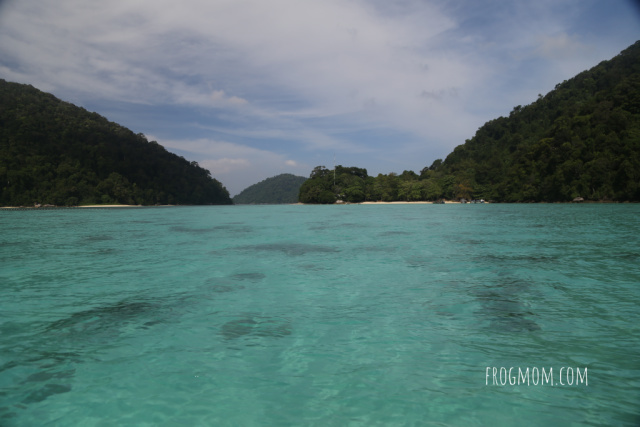 Because they are quite far from the coast, the Surin Islands are relatively sheltered from mass tourism but they still get a lot of day boats coming from Phuket, Khao Lak or Kuraburi. Arriving around 10am every morning during the cool season, these boats unload hundreds of tourists who snorkel in the pristine waters, eat lunch at the main beach, snorkel some more and depart in the afternoon. 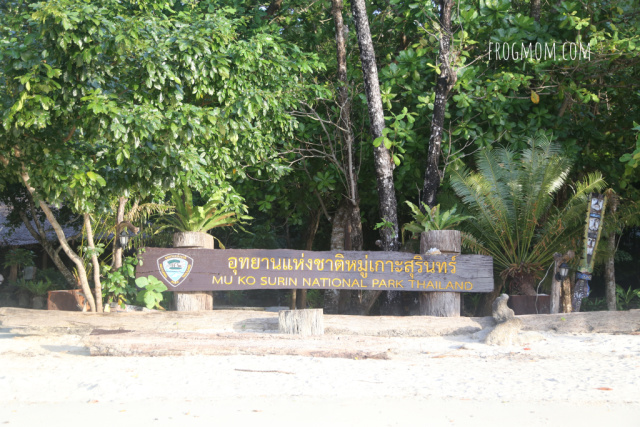 The environmental impact of these quick trips is tangible, whether it’s corals broken by snorkeling fins, corals bleached by sun lotion, food waste left on the beach or plastic bags blown at sea by the wind. To minimize our environmental and social impact, I chose to explore the islands over a three-day period with an ethical diving company called Wicked Diving. With them, we would snorkel around the archipelago and spend a full day at the Moken village, learning about Moken traditions and lifestyle, hopefully leaving no trace on the islands.

Getting to Ko Surin was not a piece of cake by any standards but it was part of the adventure. We flew from London to Moscow, from Moscow to Bangkok, changed airports in Bangkok from Suvarnabhumi to the old airport Don Muang, flew from Don Muang to Surat Thani, and then took a taxi from Surat Thani to Khao Lak. Of course, we lost a piece of luggage between Moscow and Bangkok so had to reshuffle our belongings at the airport in Bangkok, but mostly we had what we needed. 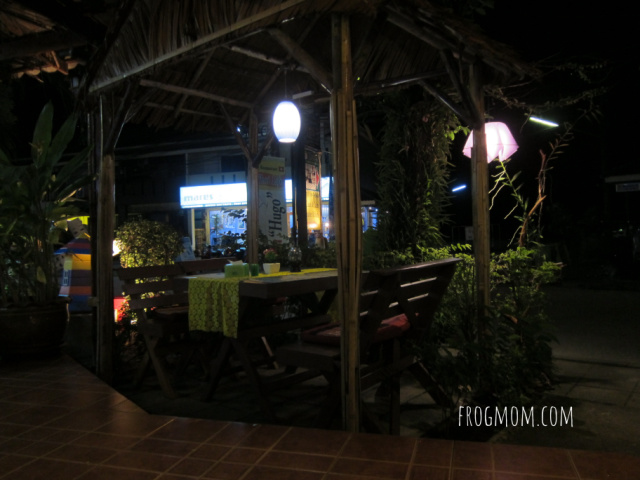 Once in Khao Lak, we stayed at an amazing hotel called The Waters, a heaven for swimmers, and registered with Wicked Diving the same night. The following morning, we were on a boat with a small backpack each, snorkeling gear and cameras to the ready. Let the fun begin!

Though Mu Ko Surin National Park counts five islands, tourists stay on the main island with the park headquarters, either in bungalows or in tents on the beach. In 2014, we had stayed in a bungalow so in 2016, we opted for a tent. 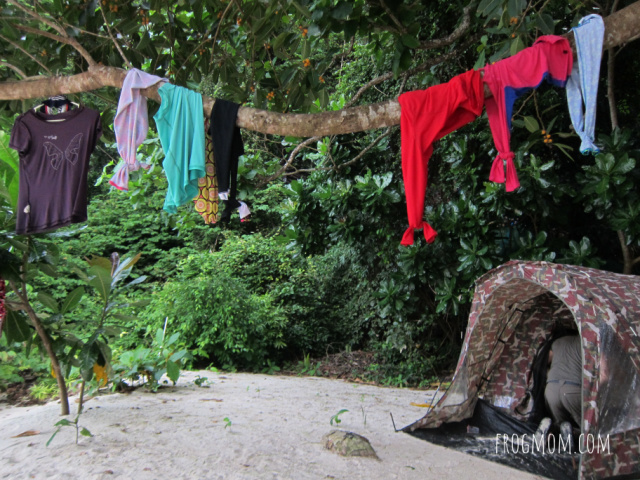 We were told that there were no bungalows, so there wasn’t much to discuss anyways. We stuffed our bags in a tent on the front row on the beach and followed our guide Ping on the boat to our first snorkel site.

Telling you every single fish we saw would be a long laundry list of tropical wildlife but that first day and over the following two days, we spotted reef sharks, swordfish, sea turtles, giant octopus, angel fish, clown fish, morays, puffer fish and a great variety of sea anemones. 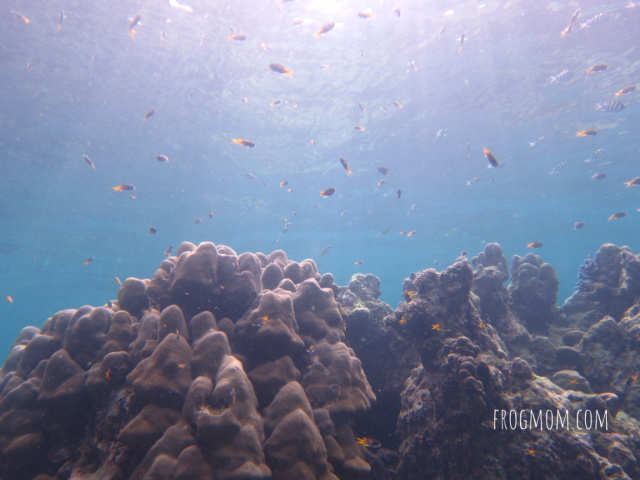 It was so overwhelming, we couldn’t get enough of the impressive variety of marine wildlife around the islands. We kept diving deeper and trying to follow every new fish species we saw, guided by Ping who had an amazing eye to spot interesting species from afar. Most schools of fish disbanded as soon as we came close, sign that they were probably scared of humans, but bigger fish kept on swimming and hunting for their next meal. Some of the corals were true cities under water, with small clown fish hiding from bigger predators in sea anemones, red lacy coral growing between rocky boulders and napoleon fish lazily scouring the bottom of the sea. 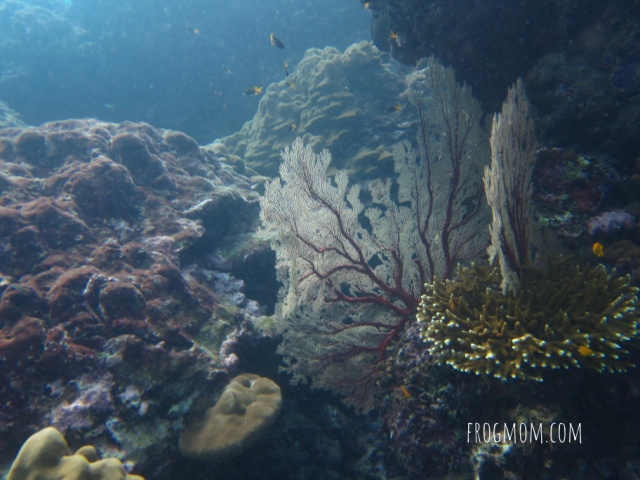 I got so excited by a specific type of fish that I dove too deep and blew my eardrums that first day. It hurt but I didn’t realize something was really off until the following night when I woke up extremely dizzy, losing all sense of balance and feeling drugged. It was very unpleasant and from then on, I didn’t dive as deep.

After the last day-trippers left, we had the island pretty much to ourselves as there weren’t more than a hundred people staying overnight, including park personnel. 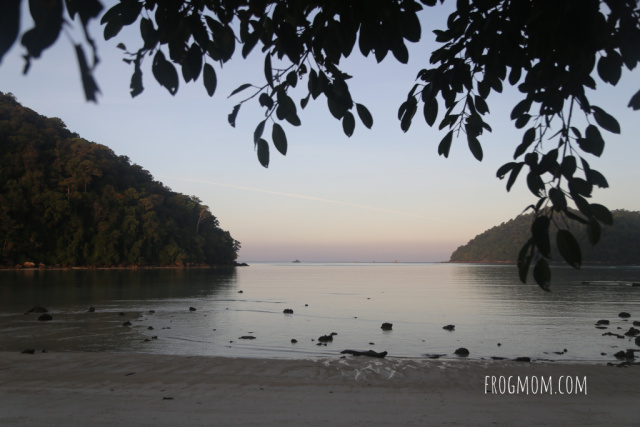 Our girls played on the beach as the sun set and when darkness settled in, we all congregated to the headquarter buildings. Electricity comes from generators fired up between 6pm and 7am every day so we followed the few lamps to the dining area and the island’s only TV. 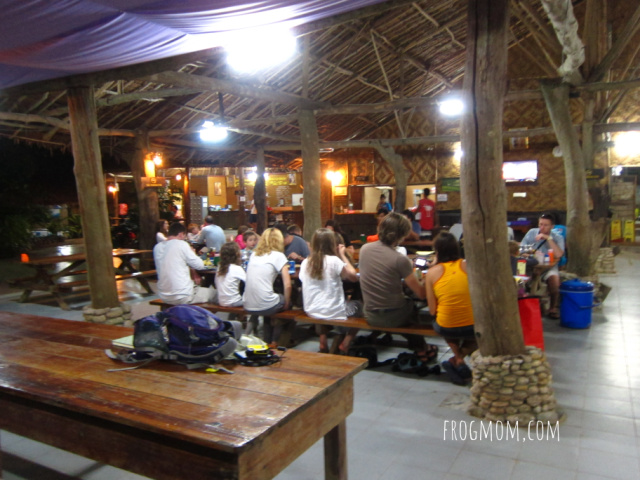 Now, it may seem like a detail but the first night, TV was showing a Real Madrid vs Kashima football game and every single tourist was sitting nicely in front of the screen! It was hilarious. When programming reverted to Thai news (in Thai), all foreign tourists turned to other activities – instagramming their day, playing games, eating and drinking.

Thai food is one of the best cuisines in the world, but Ko Surin doesn’t have the best chefs in Thailand. Everything is imported and therefore expensive. It’s not bad, mind you, but it’s really just OK Thai street food. Our lunch and evening meals included pad siew, tom kha gai, Thai basil fried pork with rice, as well as watermelon and pineapple. Breakfast could be ‘continental’ with white toast and jam, or Thai with excellent fried omelets, rice porridge and fresh fruit. As I said, it wasn’t bad but it wasn’t to die for either.

Before I start, know that the Moken village we visited burned to the ground in February 2019. All 61 buildings constituting the village disappeared in half an hour, including the belongings of all the villagers. Fortunately, there was no loss of life but as nobody knows how the village will be rebuilt, consider these photographs as archives of a village that doesn’t exist as such anymore. 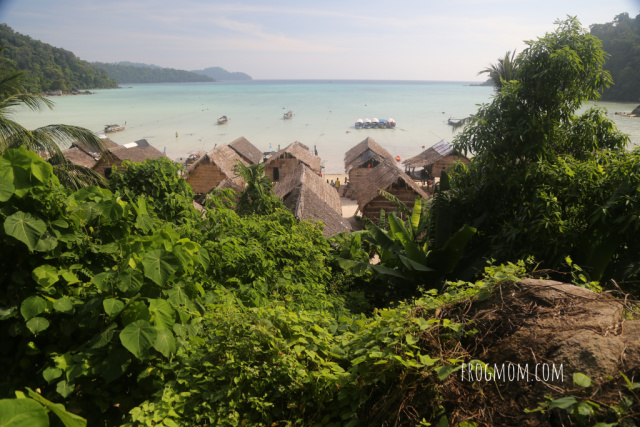 Our boat pilot, Nin, was Moken so when he took us to the Moken village on the second day, he effectively took us to visit his home. The Moken came to the world’s attention when they escaped the 2004 tsunami unscathed thanks to their ancestral knowledge of the sea. Since then, the Moken village is part of many Surin Islands trip packages and it has become something of a spectacle. 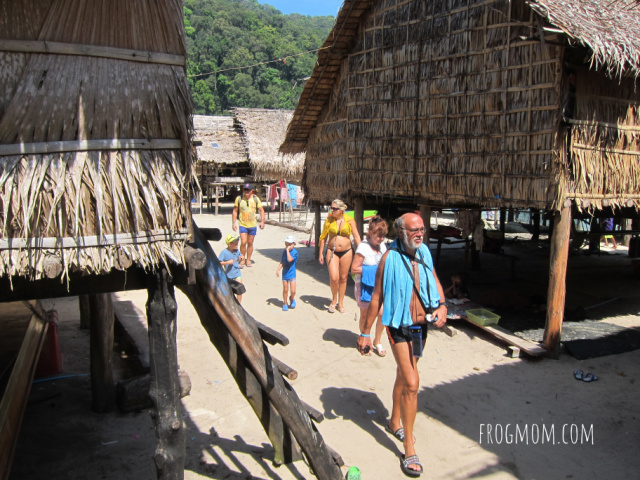 Tourists show up barely clothed, buy a few souvenirs (for which they bargain a lot), and they take pictures of people going about their daily life as if they were at the circus. Quite frankly, it’s a bit sad and shows a total lack of respect for the Moken’s way of life. 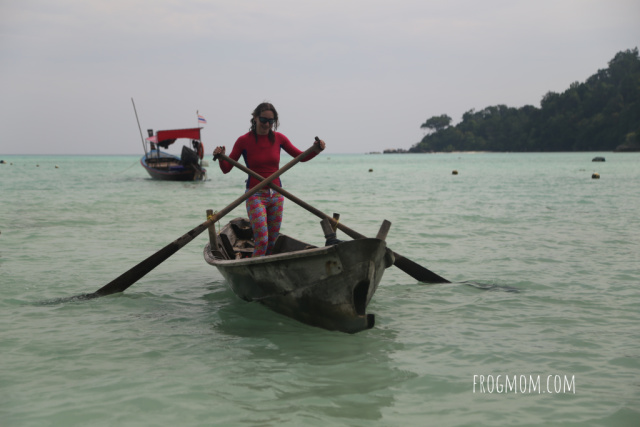 Moken people are expert seafarers but their boats require special skills. After we reached the village, Nin showed us how to row with two criss-crossed paddles and obviously, we were clumsy as hell. Most little kids around us could row like pros and had a jolly good time watching our efforts. Not only that but even the youngest kids could throw spears to catch fishes, a task we didn’t really master either. Don’t mess around with toddlers who can spear you! 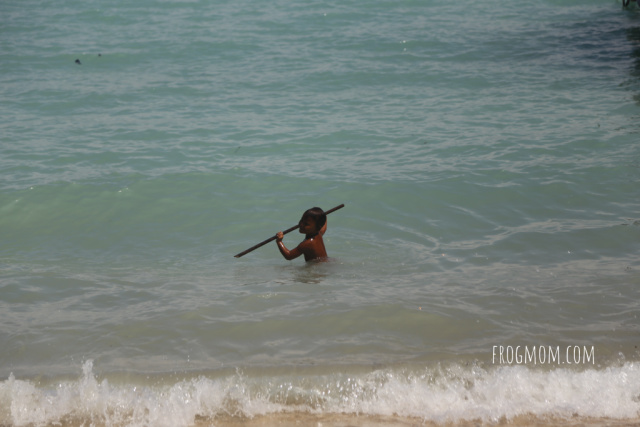 We then followed Nin past the animist totem poles into the jungle up the hill, along a nature trail including many plants that the Moken use for food, medicine and construction. It was absolutely fascinating – such deep knowledge of the natural world. 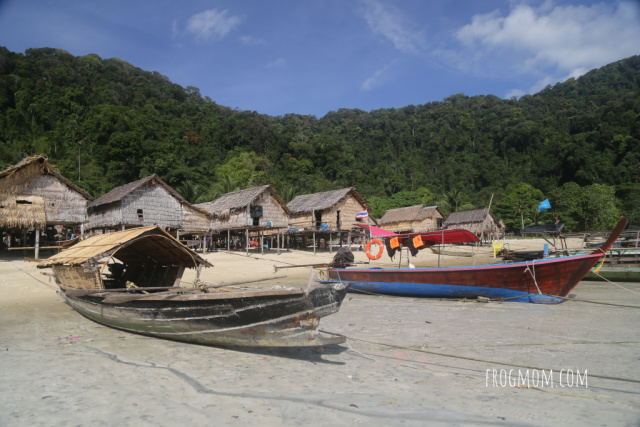 Back at the village, we partook into some rattan weaving before having lunch in a local home, plates on the floor. 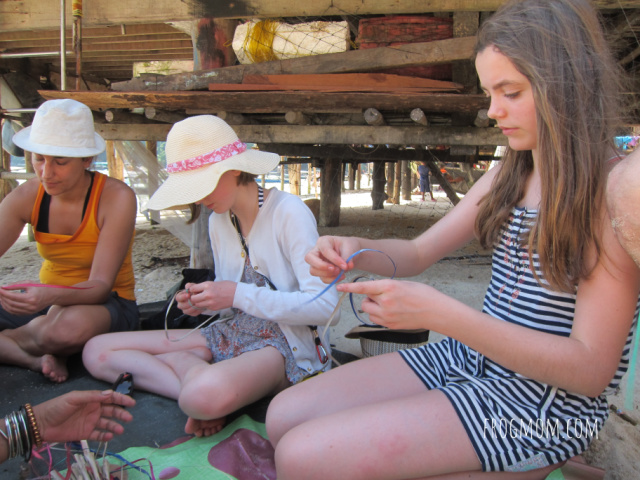 It was delicious and after lunch, I took out my journal and started drawing the houses around me. That drew a few curious kids, so I took the opportunity to ask them the Moken names for everyday items. Moken is not a written language but I wrote phonetically the names they told me in front of the drawings. It was loads of fun. 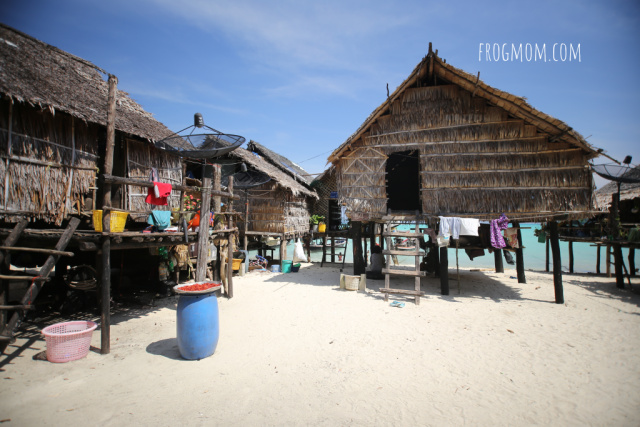 Though they were small and simple, these houses on stilts were very well organized – solar panels on roofs, water barrels to collect rainwater, chicken coops under houses, clothes hanging from wooden poles and woven baskets to dry fish and chillies.

It was a fantastic day.

Monkeys! Back on the big island at the end of the day, we were treated to an hour of monkey antics with a few monkeys hanging around food bins and climbing up trees at the park headquarters. Clearly, they were used to scavenging leftover food and weren’t shy at all around humans. 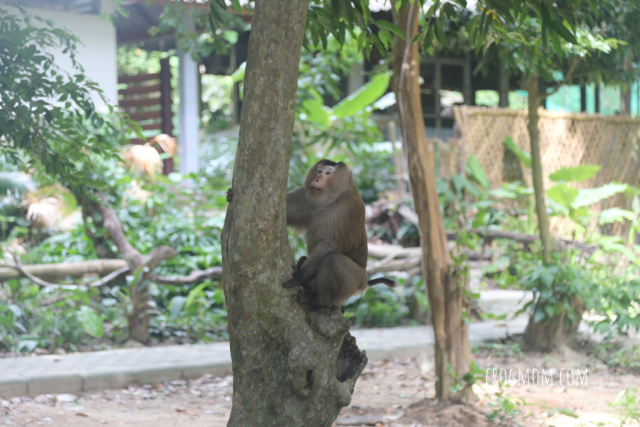 Also high up in trees and much more unusual, we saw a family of flying lemurs. Can you spot three lemurs hanging to the trunks of these trees? 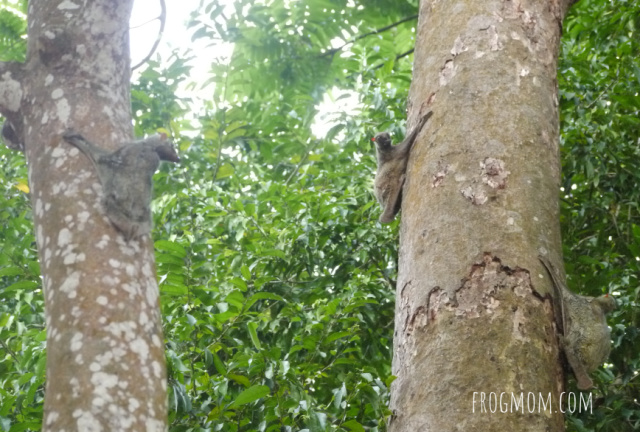 Flying lemurs are extraordinary animals. Without warning, they would ‘fly’ from tree to tree, always climbing higher to glide on their extended webbed arms to the next tree. It was a truly amazing sight that we couldn’t get enough of.

On the morning of the third day, we packed our belongings and hopped on a day-tripping boat to return to the main land, our heads full of happy memories and images.

If ever you visit, cherish this fragile ecosystem and admire the way of life of the Moken. This is truly a unique part of the world and one that will probably change as time goes.