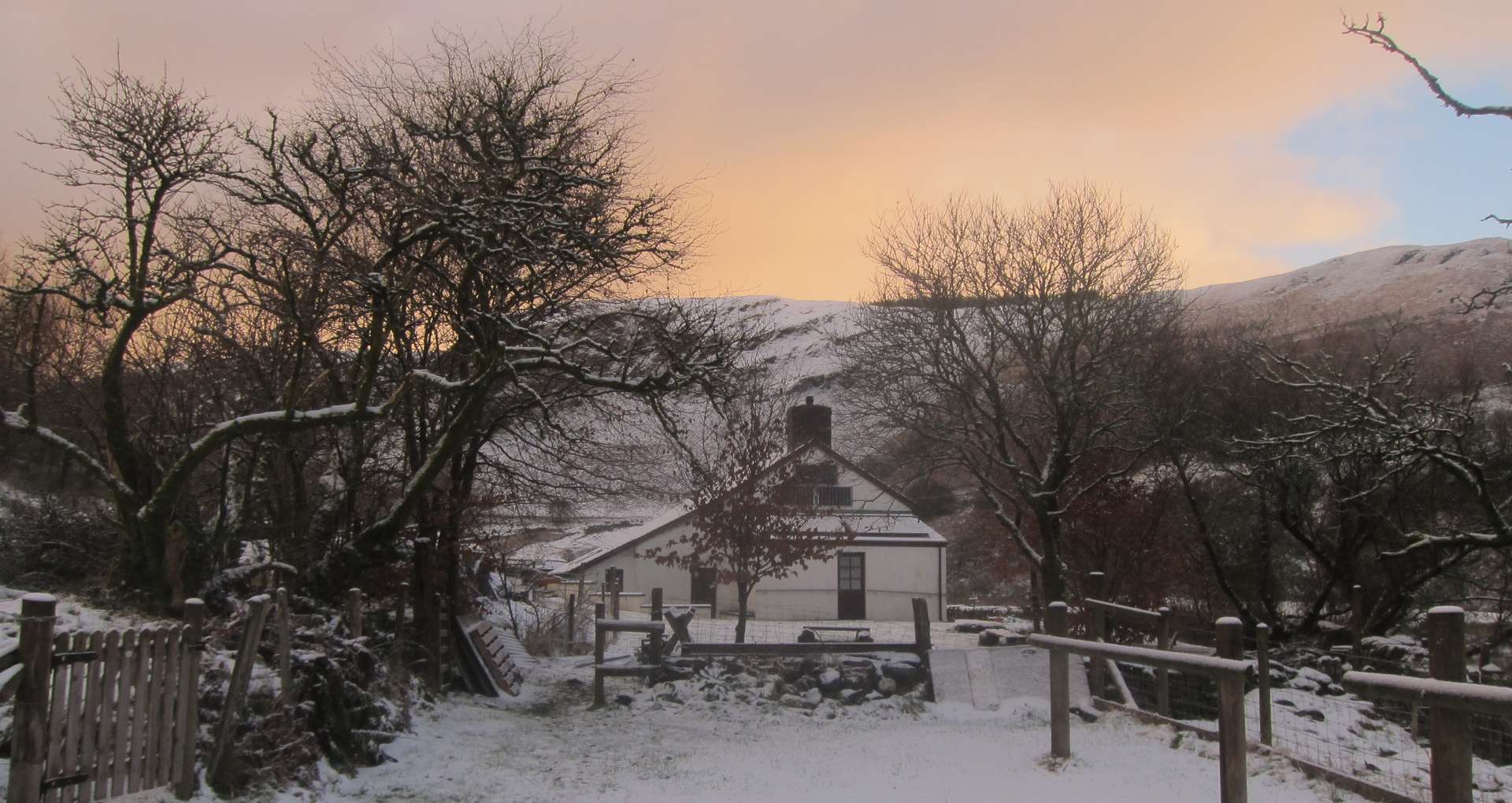 Thanksgiving is my absolute favorite holiday as it focuses on getting together with family and friends, without all the commercial baggage of Christmas and New Year’s, and I like to celebrate it outside. In 2017, we celebrated Thanksgiving in Wales with friends. We cooked vegan and non-vegan, made fires in the fireplace, went for a swim at the local lake and played card games until late at night. The best part might have been the weather – we had snow! It was also the worst part, as you will see. Getting to the hostel was an adventure in itself.

Friday Night, On the Road

On Friday after school, we load the car with my girls and a friend of theirs, as well as our friends Elina and Kat. Despite being vegan, Kat is fine traveling with a turkey in a baking tray between her feet, which is cool because we’re heavily loaded with 3 days worth of food for 20 people. It’s a lot of stuff.

Driving West from London, we hit the usual traffic nightmare around Bristol and it’s only around 11pm that we start driving up the steep mountain road leading to our hostel, a traditional Welsh farmhouse in the heart of the remote and beautiful Cambrian mountains. Over the phone, the hostel manager had said, “Don’t drive up the Devil’s staircase hill if it snows.” She also said, “It’s not easy to find in the dark.” It was raining in Bristol. The outside temperature falls from 2C to 1C to 0.5C. Rain is now turning to sludge. And to snow.

“Don’t drive up the Devil’s staircase hill if it snows.”

We are on Devil’s staircase and it’s snowing.

In a bend, the van slides backwards. I hit the brakes and start sweating in the driver’s seat. This tiny twisty road is icy as hell and the grade will reach 25% at its steepest. Will the 9-seater make it? I try again but the slope is too slippery and we slide further backwards. Everybody out! Elina takes the wheel, she’s more cool-headed than I am. 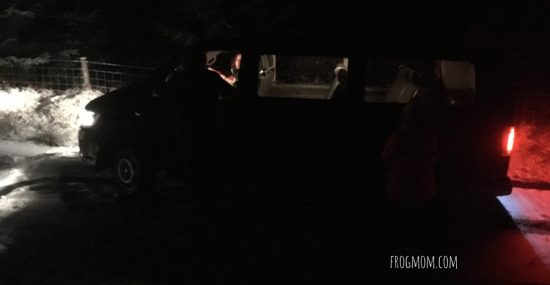 Inch by inch, she drives the van beyond the bend. It’s snowing harder now and the snow is starting to stick but the road is still very slippery. Two of the girls are wearing light sneakers, fresh from school, and are stomping around in the snow. We are now probably 4 km/2.4 miles away from the hostel and without phone reception, we’re pretty much on our own. Admittedly, there are salt boxes on the side of the road but we didn’t bring shovels. What were we thinking! Hold on. Would baking trays do? 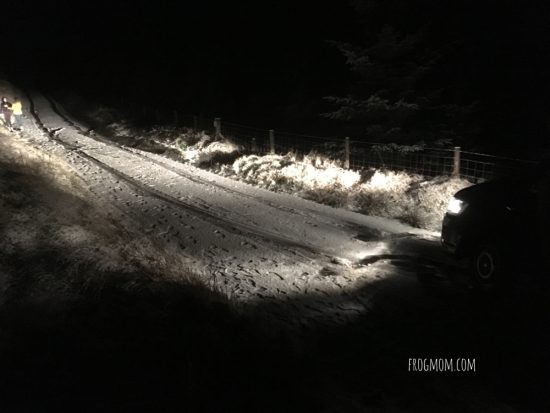 Out of the trays, the turkeys go. The scene is slightly surrealistic. On the sides of the road, my girls carry each a roasted turkey in a plastic bag. We, adults, relay each other between salt boxes and the road, scraping the road with whatever we have. With our shoes, we try to spread the salt but it’s too little too late and the shoes don’t like it. It’s snowing more by the minute. The road is slick and it’s getting late. Past midnight, we park the van on the side of the road, grab breakfast food and a few clothing bags, and leave on foot.

“It’s not easy to find in the dark”

The hostel manager had also said that Dolgoch Hostel is not easy to find in the dark. You bet, it’s in a Dark Sky Area. Oh, the irony. When the snow blizzard stops, half an hour later, we have the most beautiful view of the Milky Way above our heads. So many stars, so many planets that we never see in the city. It’s breathtaking, and it’s not just because it’s cold. If we weren’t carrying bulky bags at an ungodly hour, the scene would be magical. The teenagers use their iPhones to light the road. We just walk in the dark as the moon lights the snowy path just enough to show us the way. 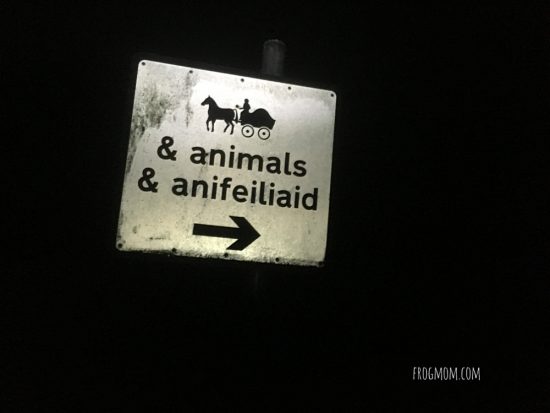 At the bottom of the hill, we walk past a road sign for horse-drawn carriages. All is good, we are in rural Wales where Queen Victoria is probably still alive in people’s hearts. 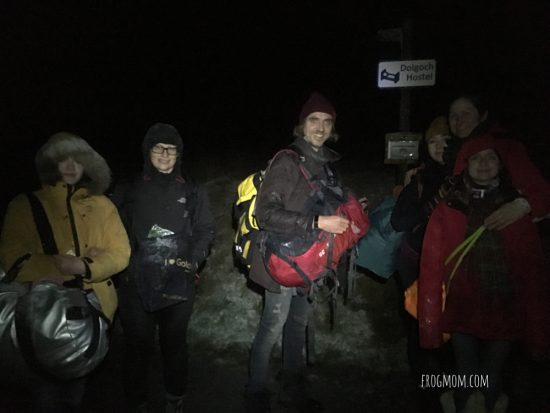 Finally, we spot a small sign for the hostel at a road junction. Hurrah! We reach the hostel fairly wet and cold, but safe and with a story to tell. I realise that most of us have a change of clothes except my youngest. All her stuff is in the car. After I lend her a few items at 2am, everybody is in their beds.

We wake up to a glorious morning. The hills around us are covered in snow and in the morning light, they are vaguely pink and gold. Quickly, we light up a fire in the fireplace because, have I mentioned that the hostel has neither heating nor electricity? That’s probably why it was so cheap and fortunately, there’s plenty of wood for us to use. Slowly, everybody wakes up and breakfast gets underway. Wait, somebody’s missing. Where is Liz?

With the hostel phone, we call our friend Liz. She tried to reach us last night but had no connection. Her van got caught up in the snow blizzard and she slept in it. She’ll be with us later. 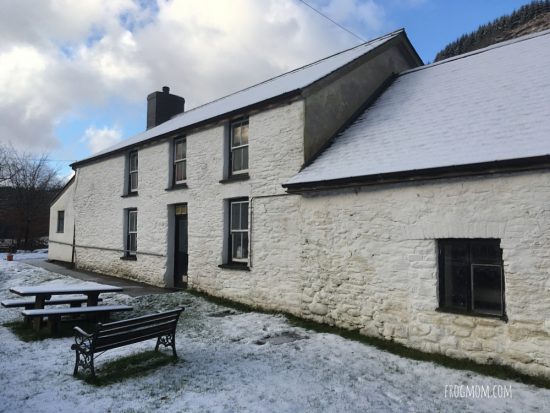 In that case, it’s time we all went out to recover the van at the top of the hill before snow turns to ice and turns the hill into a complete slide.

The hostel is well equipped in shovels, wood saws, buckets and steel bars. You’d think it had happened before! 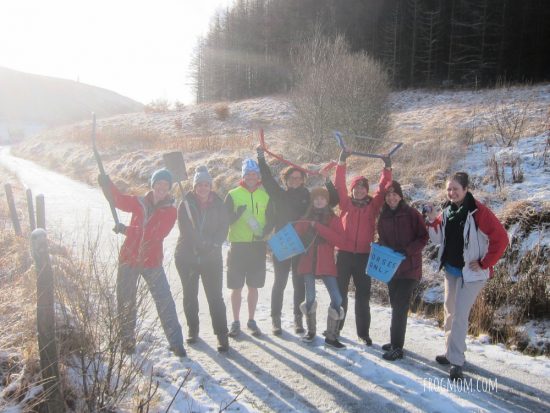 Maybe it has. We all joke about it along the way and send a forward crew to pick up the van. Elina will be behind the wheel. 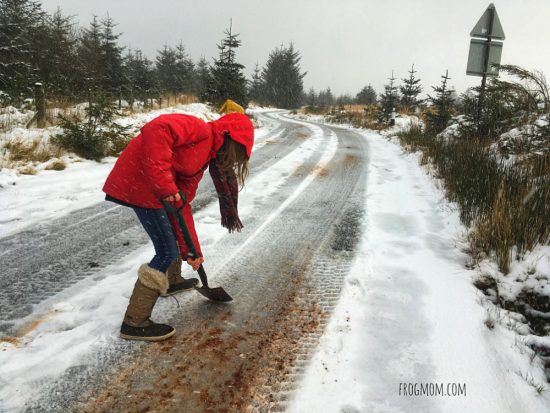 With the back-up crew, I shovel salt and dirt onto the road, scraping icy bits to make the road easier to drive. My youngest finds the situation quite funny and does her part. After an hour, the van arrives and we all hoot and cheer. Elina’s made it over the top of the pass and from now on, it’s all downhill. Slowly but surely, we bring back the van (and the rest of the food, perfectly refrigerated overnight) to the hostel.

Before cracking on with Thanksgiving dinner prep, which is a pretty big endeavor, we get ready for a swim at the local lake – Llyn Brianne. I know, it snowed last night. Did I mention where our friends come from? They’re all part of the Serpentine Swimming Club, a proud London swimming club whose members swim year round in Hyde Park without wetsuits. A fresh dusting of snow doesn’t scare anybody. In fact, swimming with snow around us is seen as fun rather than misery. 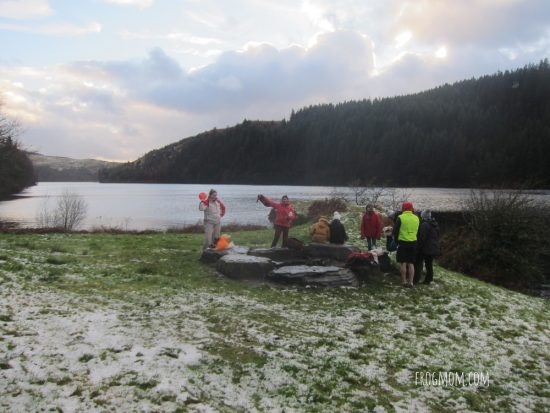 Here we are, having found a “beach” and a good entry point in Llyn Brianne. We prepare our clothing in reverse order for when we get out and hop in. It’s cold and invigorating. We poodle around. Some, like Bee, go further than others and return in butterfly. After our swim, we walk back to the car and collect mosses and dead branches to decorate the Thanksgiving table.

One of the highlights of these Thanksgiving weekends is the crafts part. Most of us never do any crafts so I’ve decided that each year, we would create our own table decorations without plastic. 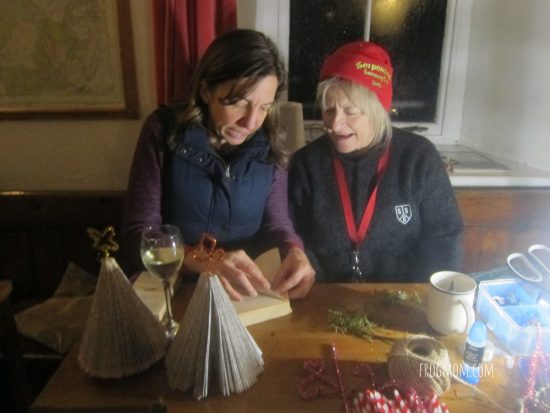 Here are the book trees made out of saucy novels bought cheap at the local charity shop. Reading choice excerpts out loud while drinking a glass of white wine has us all in stitches. Some of these romance novels are naughty! You can create these fantastic book trees following this tutorial. 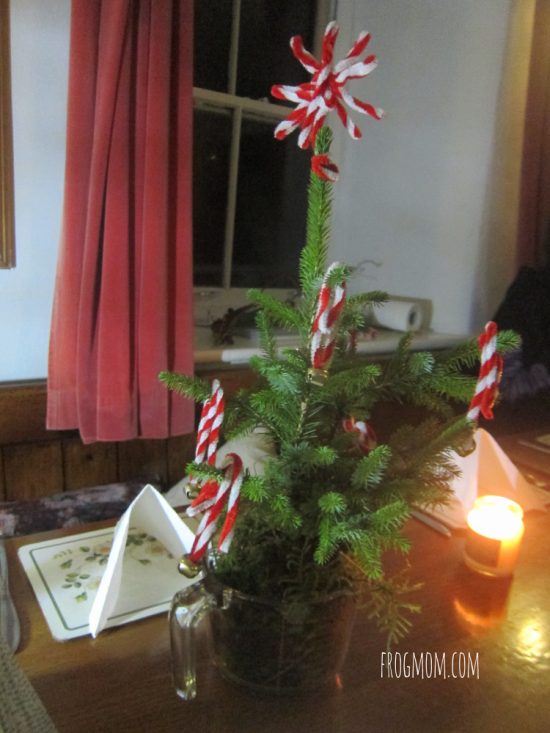 Here are tiny table top Christmas trees with pipe-cleaner candy canes and stars. Last year, we made walnut pilgrim boats and that was quite cute too.

Of course, dinner doesn’t cook itself. Everybody’s got a job in the open plan kitchen. Chopping, dicing, cutting, mixing, stirring, washing – there’s so much to do! 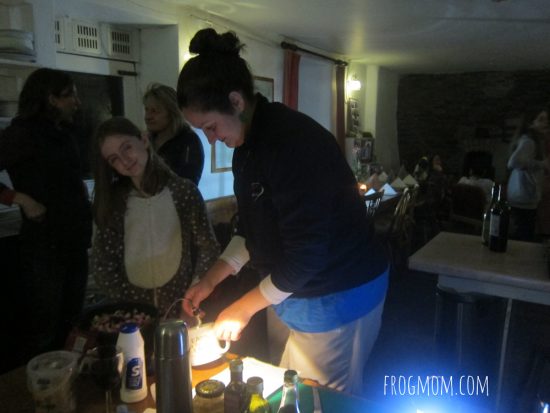 Without electricity, we use whatever light sources we have to see what we’re doing – phones, headlamps, lanterns and reading lights.

In the US, Thanksgiving dinner is usually an afternoon affair that drags on into the evening. As we’re in the UK, we’re free to have dinner in the evening – as it should be. We have invited the hostel volunteer to join us. He’s an old guy who lives locally with his wife and knows absolutely fascinating tales. He’s a war veteran, makes his own bread at home and grows his vegetables. He shares baking tip with us, tells us about the area and the trust that runs this wilderness hostel. 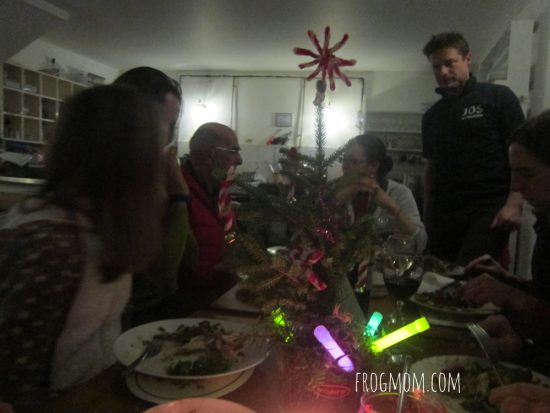 He’s part of a group of volunteers (mostly retired people) who take turns staffing the hostel off season. I say, I don’t know that I will be that brave when I am 75 years old but he’s absolutely fantastic. After dinner, we play card games around the fire and some of us doze us to the Land of Nod. It’s been an exciting adventure.

The Day after Thanksgiving

Time to pack up. We divvy up the leftovers, recycle the book trees and leave on under a lovely winter sun. On the drive back to London, we glimpse some wonderful winter landscapes in the Brecon Beacons. What an adventure this Thanksgiving has been. 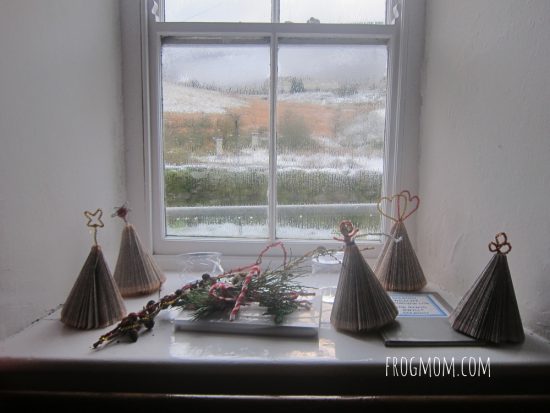 2 thoughts on “Thanksgiving in Wales”