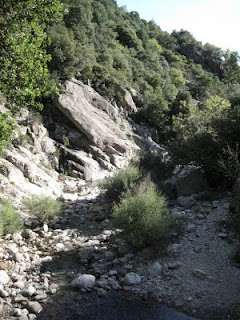 In the South of France briefly last week, I took a hike at one of my favorites natura 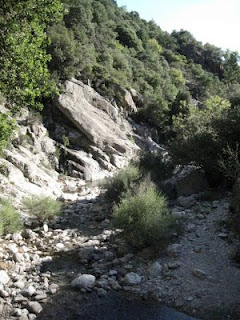 The trail along the Gorges d’Heric follows the Heric river over 4 steadily climbing miles, dramatic towering limestone and gneiss crags and buttresses above. This is great climbing terrain, but not for beginners as the space between bolts is somewhat daring. As the trail leaves the river, it veers off into the mountain through chestnut groves to reach the hamlet of Heric where you can sit on the fig tree-covered piazza and get a well-deserved drink at the seasonal cafe.

Since the Gorges d’Heric is protected wilderness as part of the Parc Regional Naturel du Haut-Languedoc, hikers and climbers are the only population you’ll meet there apart from wild boars and mouflons mountain sheep. I’ve spent countless summer days refreshing in the crystal clear and frigid swimming holes along the Heric river, but have more rarely had the occasion to enjoy the off season.

October was just the perfect occasion. The weather’s 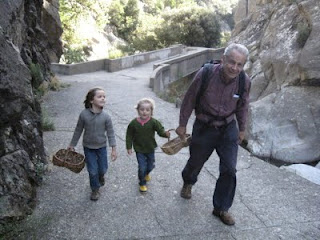 still not too cold and chestnuts are falling off the trees, covering the ground with their pretty green and yellow prickly burrs. After driving through Mons-La-Trivalle, my dad and I and parked the car at the designated lot. We got the girls out of the car, twig baskets for chestnut picking, and hit the trail.

Luckily for us, we met our first chestnuts very close to the entrance. It totally galvanized my girls. Each burr contained three nuts, the middle one being pretty sizable (as in “please roast me”), the two side o 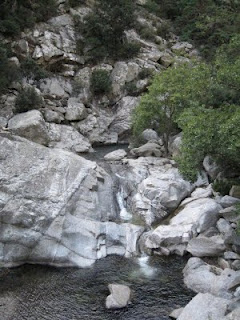 nes less so. As it was already past 4pm, the sun was taking a bow and shade was quickly gaining ground. The wind felt completely at home, so much so that we had to hold hands with the little ones lest they be thrown off their feet, which made them giggle like crazies. Talk about a perfect wind corridor…

Along the trail, we only met three other groups of hikers, most going down and yes, some were holding bags loaded with chestnuts. Chestnuts are a big element of that region’s flora. I would even say they are part of the Languedoc’s history and culture, as communities were built around chestnut groves and festivals celebrate this typically local harvest such as Saint-Pons-de-Thomieres’ traditional Fete de la Chataigne (Chestnut festival) due to take place Saturday 24 and Sunday 25 October, 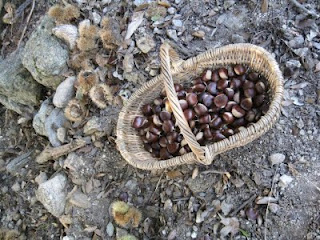 2009. At this festival, chestnuts are combined with revivals of medieval Cathar life in period costumes, the Cathars being the early Christians persecuted and eradicated by the French crusaders on behalf of the Pope and the King of France.

As I looked up the sides of the trail, I noticed man-made stone terraces, labor of necessity for generations who survived on this staple food. Some were still up, others in rumbles. If the regional park system wants to preserve the history of the site, they better prevent erosion and torrential rains from completely wash 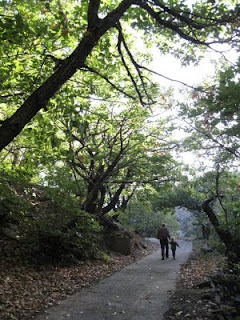 ing away these terraces.

We kept going on and as we reached the turn that separates the trail from the river bed, more and more chestnut trees appeared. Their tender green foliage creates harmonious overarching canopies over the trail and as the late afternoon light pierced through it, we got rather quiet. After this hard mineral world, it was a soothing sight. More terraces showed up further up. There is a saying in the region that says that no inhabitant of Heric ever died in their bed, implying that these were hardy mountain stock always on steep trails working for their living. I looked for time markers, indicators of past centuries other than piles of rough-edged rocks. It was soon to come under the shape of the hamlet of Heric. 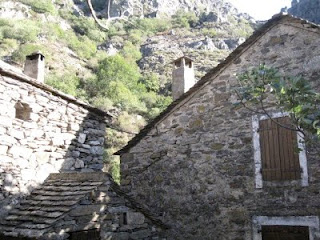 t know how many people live there but I’m guessing a few dozen people at most, if even that. The hamlet is typical of nearby mountain villages. Stone and dirt streets. Stone houses. Slate or stone roofs. Somehow, it says something of the way people lived. We are not talking cozy multi-level wood cottages here. Life was hard and the sturdiness of the local architecture reflects the hars 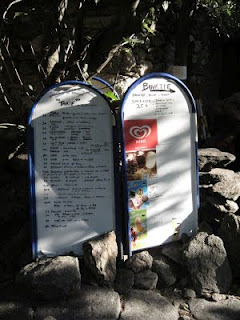 It was well past 5 pm by the time we reached the hamlet’s piazza. I had promised my girls a soda at the cafe but a “Closed” sign crushed my hopes. We were 20 minutes past cafe hours. Thirsty, my girls were disappointed. As we were turning around to go get my mother at the train station, a woman walked out of the house with the cafe sign. “You here to drink?” she asked from afar. “Sure thing,” I replied, “We’ll get seated.” And so my valiant junior hikers feistily drank their soda on the piazza.

Then, the woman noticed our baskets. “You been picking chestnuts?” she prodded with a disapproving look. “Well, a few,” I said. As I said that, I knew this was no good. She lectured us on how forbidden it is to pick chestnuts because it is a regional park and that by doing so, we deprive boars and mouflons of their main diet before wintertime because you see this year acorns have been really s 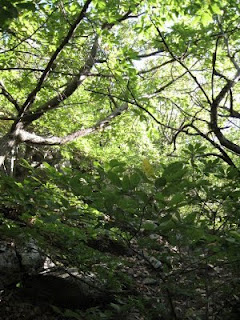 kinny with low rain fall and what not. We politely nodded. Most of our chestnuts were in our backpack. The baskets just had a few.

What can I say? Had I seen a sign banning chestnut picking, I would happily have complied – but I did not see a single one. I did not see any restrictions on the park’s website either. If there are restrictions, the park’s officials are being discrete about them. “As if the boars need to go on the paved road to pick their chestnuts,” said my father shrugging. True, chestnut trees are everywhere. I’ll have to investigate with the local rangers. As we walked down the road, we crossed paths with two other hikers. I am not telling what they were doing.