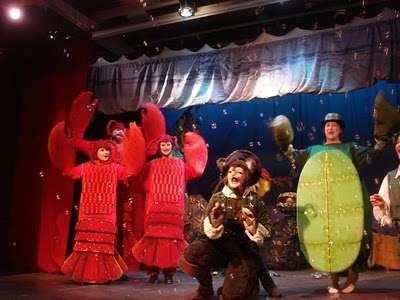 Where can you get the following for $20? Musicals, children’s theatre, puppet shows, toy parades, folk dancers, Christmas carols, 700 actors in period costumes including children – all in 3 acres of re-created Victorian London streets? Think explorers clubs, antique bookstores in alleyways, tea houses, London docks with pirate cove, parlour games, traditional English pubs and a man-powered carousel. Where then? Why, at The Great Dickens Fair of course! If you have never attended this San Francisco holiday tradition, run to the Cow Palace in Daly City and catch up on fun because it’s a real treat and the rumor goes that even in Britain they don’t have a Dickens Fair quite as nice. I, for one, haven’t skipped a year since 2004 and that’s all my kids talk about all year until we go again.

The folks at the Dickens Fair are not early birds – the fair opens its doors at 11am. So when I go, we show up early to find street parking and quietly make our way to the doors. At 11.01am sharp we’re inside and enjoy the waltzing dancers of Fezziwig’s Dance Party until the Christmas Pantomime is minutes away at the Victoria & Albert Music Hall. Last year we saw Aladdin &Cinderella Meet The Monkey King and we’re going for seconds this year because it was plain hilarious.

The Gilbert & Sullivan show is also a great family performance because it’s an hour-long redux of a longer actual musical – with great singers and sets. After a few years of Pirates of Penzance (our favorite so far), the Gilbert & Sullivan is now The Mikado with the delightful Yum Yum.

Between shows, we roam the streets of London and this is what we never miss because a Dickens Fair wouldn’t be complete without them:
– The Candy Machine. Do your kids love the eggs & sausages machine in Chitty Chitty Bang Bang? This one starts with a balloon, darts and extreme skill! Once you pop the balloon, watch the crazy mechanism bring your child a candy cane – through many a ladder, slide, catapults and more. Love it!

– The Safari Carousel. Carousels date back to the 18th century. Back then they were just chairs on rotating arms. The first “horse and carriage” style carousels started appearing in the 1870’s. The Dickens Fair’s Safari Carousel draws long lines so get there early. A man clad in colonial attire pushes the animals where kids are seated and tells a fantastic safari adventure – with drum beats and fantastic finale. Kids get a great kick out of the man-powered effect.
– Boot the Cat. This one is so unPC, it’s wonderful. Kids sit on a couch, grab a black boot and try to topple the cat on the fence. Great use for boots for which you’ve lost one foot.
– Children’s Painting Garden. Oh we try to steer our kids away from this one but it’s mission impossible. They just love painting a ceramic ornament to hang on our tree. Of course it weighs a ton and makes the trees’ branches droop but they don’t care – and now they’re family keepsakes we cherish despite the kitsch factor.

– Punch & Judy puppet show. Like there’s no Renaissance Faire without grouchy Mr Punch and his pesky wife, there’s no Dickens Fair without the pair either. Our kids love to watch the puppets quarrel and laugh at their antics. It reminds them of our French Guignol puppet character.

– Christmas Carols and the Paddy West School of Seamanship. Nothing says holidays like a bunch of Victorian ladies singing carols or rowdy sailors singing sea chanteys.

Other than that what can I add? If your stomach is growling, you’ll find delicious chicken pot pie, comforting bangers & mash, full-on turkey meals, fish & chips, pastas and sweet treats to tempt even content appetites. We love grabbing a paper bag of warm cinnamon crunchy almonds, they’re so tasty when still warm. And for beer lovers, the Dickens Fair is trying something new this year. On December 12, the fair will host a BJCP-registered homebrew beer competition! That’s on top of the absinthe and ale pubs. However, if as a true Englishman you want your beer served room-temperature, you may have to order it when you get in in the morning. In California, we still serve it chilled, even at the Dickens Fair!

One thought on “The Great Dickens Fair”