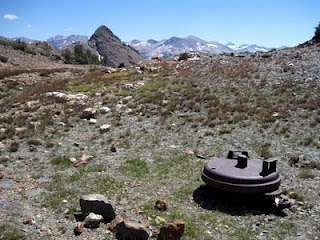 > The Great Sierra Mine: A Ghost Town in Yosemite’s High Country

The Great Sierra Mine: A Ghost Town in Yosemite’s High Country 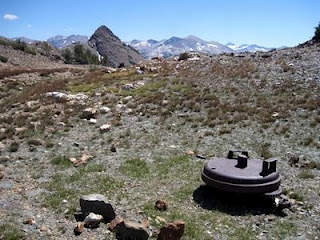 In 1859, George W. “Doc” Chase, a wayward dentist from Mariposa, arrived from the diggins in the Eastern Sierras, looking for a rich vein of silver. Making his way at high altitude, he followed a rugged trail along the high ridges of the Yosemite’s high country, admired the icy silver waters of Ellery Lake, and scrambled his way up a crest near the western end of Tioga Lake. 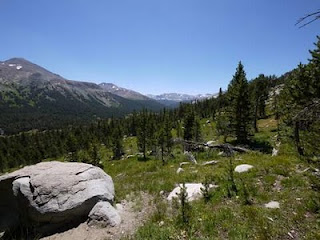 There, he pulled his pick and shovel from his rucksack and worked at it, finding a promising lode. The next year he returned, dug some more and scratched a message in a tin can with the finest results of his excavations. He left it under a rock. That was as much as Chase did to stake his claim to The Sheepherder. His life went on and the can got all rusty. 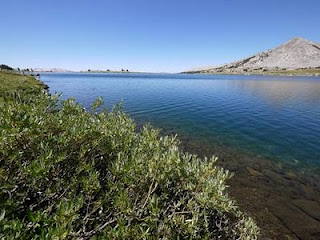 For more than a decade, the tin can lay at the foot of Gaylor Peak where it had been placed and forgotten. In 1874, a young sheepherder going by the name of William Brusky stumbled about Chase’s flattened can, his pick and his shovel. He unearthed a promising vein of silver. Word got around.
The Tioga Pass mining fever was born and that’s how Tioga Pass, the eastern entrance to the Yosemite National Park, got its name from a mine. The Tioga Mine was a full-flown mining town, complete with an assay office, blacksmith shop, storehouse, boarding houses, workshops and cabins. 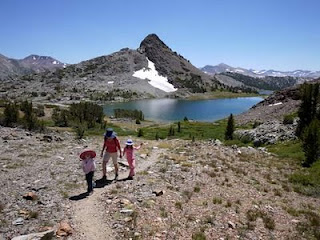 Though we did not push to the Tioga Mine, last week we took a trip back in time by hiking up to Gaylor Lakes from Tioga Pass and going to the remains of the Great Sierra Mine.
The trail starts right at the Tioga Pass at the elevation of 9,800′, next to the rangers’ kiosk. No sooner had we parked at the tiny lot that we realized our backpack full of food for the day was back at the Tuolumne Meadows campground! I drove fast and came back with our lunch and snacks, glad that a bear hadn’t found it before me. The hike could start. 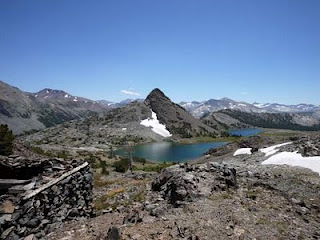 Having walked this path five years ago, we knew that the hardest part would be to get our girls over the hill. Gaylor Lakes trail starts with a steep 600′ elevation gain over half a mile and from the ridge, is a breeze down to the lower lake where we planned to have lunch.
Lower Gaylor Lake is a stunning sierra lake, stretching along the plateau like a never-ending pool whose southern edge drops in the valley with  alpine peaks in the distance. It is simply gorgeous and the clear waters are a call to swim. However our goal was much higher that day so I waited. 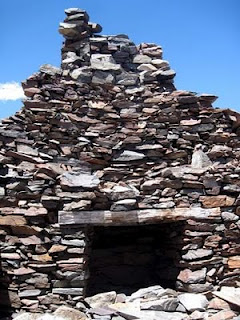 Refueled, we followed the lake’s edges to walk up the feeder creek to its snowmelt source, Upper Gaylor Lake. Mosquitoes were few and far between at the windy top but very hungry closer to the bottom so we hastened our pace to reach the second lake.
Two families were picknicking at the lake – an unthinkable crowd by High Sierras standards – so rather than stopping for a break we just went on. We could already see the stone cabin that marks the ridge and the first of a few scattered buildings of the great Sierra Mine.
Finally we reached the top just below 11,000′ and enjoyed the views before going “mine-hunting.” The walls of the ridge cabin still stand pretty tall, showing the fireplace without any doubt but the wood and stone roof has collapsed, leaving a hazardous timber chaos inside the walls. 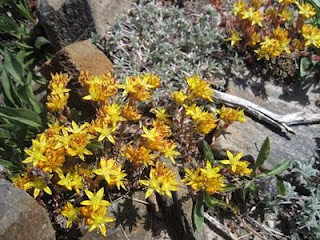 Our girls had fun waving at us from the window opening that still has a wooden frame but the novelty quickly wore off and we went away to explore the mountainsides.
Interestingly the trail we followed is called at Gaylor Lakes Trail but it goes all the way up to the mine at the place that seems to be called Tioga Hill. After the mine, no more trail. It’s easy to get lost in this highly mineral world where to the non-geologist, rocks mostly look like rocks. 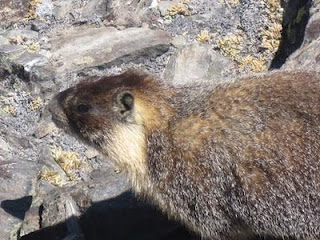 Trees have long disappeared and grasses are the only plants that grow at this altitude. Wildflowers enjoy their four months without snow at their fullest, coloring the rocky soils with vibrant patches of yellows, blues and pinks.
In the middle of all this, we saw a plump shape scamper away from a rock pile nearby. Yellow-bellied marmot! I grabbed my camera and chased the rambunctious rodent that kept escaping my best efforts. Finally I came to a boulder and looked down. The marmot was right below me, half brewing its next move. I was glad when I was able to shoot this close-up portrait. 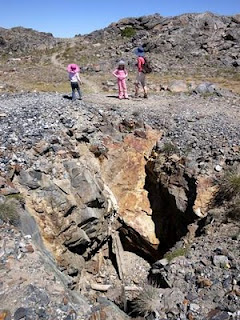 Coming back to my family, I saw my husband pull back my girls by their pants. They found a mine shaft and were obviously standing too close to the edge. All vertical, these mine shafts were probably entered with a rope system and blown by dynamite.
They are now boarded up but the holes remain, transforming this ridge in a mining Swiss cheese. In the hour we stayed up there I counted four different shafts and we didn’t go very far.
As we were about to turn around, my husband remembered we hiked to a third lake five years ago. Our eldest protested but she didn’t have much choice so we moved on, now fraying our way on rocky slopes as we went. 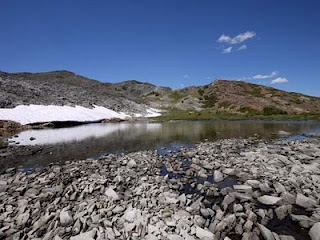 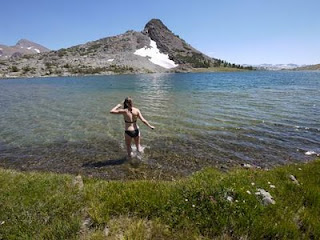 At that point the girls had earned their ice cream back at the Tuolumne meadows store and I wanted to swim so we turned around and walked back. I stripped down to my swimsuit at the base of Upper Gaylor Lake and crossed it with a brisk breast stroke. It’s an easy quarter miler whose main challenge lies as the cold water (high 40s?) and the thin air that you get at 10,600′. Next time I won’t forget my swimming goggles – I’m not used to covering more than a few yards in breast stroke anymore.
This swimming episode concluded a beautiful hike and we hung out by the edge of the lake, now crowded only by us, until the ice cream call was unberable.

Now, if you want to discover more ghost towns in Northern California, check out Ghost Town Explorers, a well-documented website with photos of remote and not-so-remote ghost towns and a special Eastern Sierras page. And to learn more about the history of Yosemite’s high country, check out Gene Rose’s book “Yosemite’s Tioga Country“, a must-have for Yosemite lovers. I pulled out my historical information from that book, recommended by a ranger on our last visit. 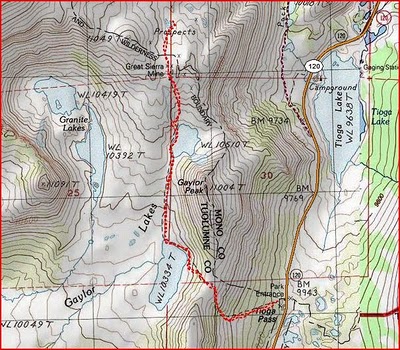