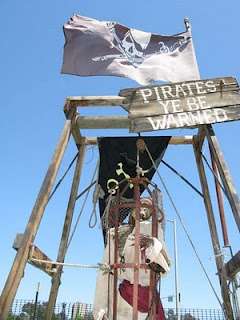 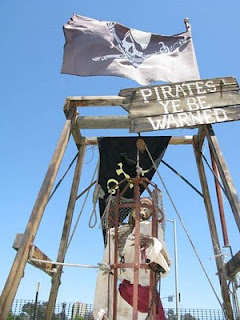 Ahoy matey! Yes ye lilly livered landlubbers, it’s that time of the year. Time to channel your inner Long John Silver at Vallejo waterfront’s two-day Northern California Pirate Festival on June 19 and 20, 2010. Get the peg leg out of the closet, find the white flannel shirts, let your hair down and let’s hear some ferocious Arrrrrrrs! Last year we went with my husband and two daughters and had a giant ball despite a) a scorching sun and restrooms that seemed like they were miles away, b) a real parking challenge that ended up with us crossing some forbidden residential properties.

As I announced the program of the day that morning – it’s like this at our house, I dress up in minstrel attire, unroll the scroll and read the list really loud perched on a barrel – my husband’s initial reaction was: “What, the same folks as the Renaissance Faire? Do we have to?” 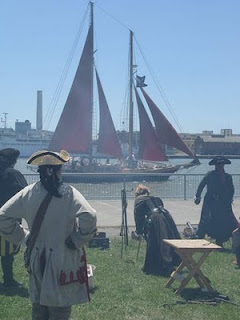 Err, yes, we have to. Probably the same folks as the Renaisssance Faire and the Dickens Fair too. I mean, they have a ton of white open-collared shirts with ruffles in their drawers. They’ve got to make the best use of them right? So yes the same folks but get this. We get to see Capt’n Jack Spareribs perform and after I interviewed him for my blog, I was dying to see Johnny Depp’s look-alike with irresistible juggling skills. And so we went.
Good news, the entrance is free. Let me repeat that. FREE -unlike the Renaissance Faire and the Dickens Fair and honestly, I don’t know how they manage to keep it that way. All you are going to enjoy, the music, the performers, the puppets, the cannon-firing, the boat battles, that’s all free. So make sure to put on your best smile and enjoy the show. 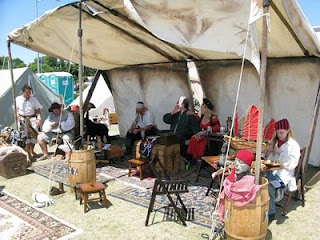 Right after we got in, the Schooner Aldebaran was getting ready to engage into a fierce ship-to-shore cannon battle so we rushed to the waterfront. Boom! went the cannons, and sure enough we were smoked in. The girls were enthused. We couldn’t hear many of the hopefully salty exchanges but enjoyed it tremendously. However the metal handrail lining the waterfront seemed totally out of place. Despite the costumes and the theatricals, the scene was lacking a dirt waterfront and 18th century rundown houses. Sigh. I am signing a petition right now to build a marine waterfront appropriate for period pirate fights. 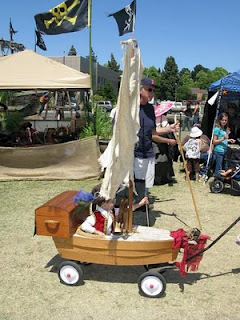 The many shops and grass alleys forming the pirate encampment had achieved a remarkable effort in looking as pirate-like as possible. It was actually great eye candy and we soaked it in. My favorite hangouts were places where the girls could play games and activities. By knocking down rats at the Cat-Apult vs. Pi-Rats, our 5-year-old won as wooden flute she still cherishes to this day.
We even met a little fella pulled by her mom, all comfortably sitting in the pirate ship on wheels his dad had built for him. 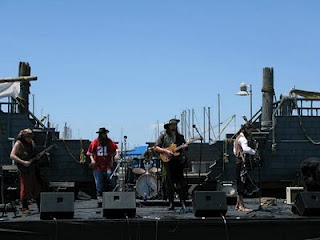 Hey dads, feeling inspired? This is a great craft activity if you have a lonely Radio Flyer wagon in the garage. Our girls certainly thought it would make an ideal weekend activity. However Papa a.k.a. Cedric had other plans. Cedric was already eying the list of performers.

“Capt’n Jack Spareribs is performing in half an hour, let’s go to the main stage!” Yoohoo, finally I get to see the real thing on stage. We headed over and heard the last two songs of a rock pirate band. Wish I remembered their name. 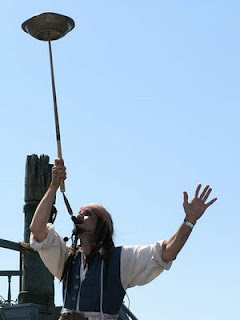 Finally You-know-who arrives on stage. Thrills in the audience, as he had been voted best family fun entertainment by readers of the SF Chronicle just days before. Man, Ace Miles a.k.a. Capt’n Jack Spareribs sure can juggle. Look at that, with a mouth-piece too. And he’s a ventriloquist.
If you’re sitting in the audience, be ready for a few harmless tricks that may involve you, your partner and delicate balancing acts. Nobody was hurt and the audience loved it all. It was so worth driving all the way to the Vallejo waterfront, a place we never go to otherwise. Arrrrr, can’t wait for this weekend. Aren’t pirate festivals the ideal Father’s Day outing?
Details: The Northern California Pirate Festival is located on the Vallejo Waterfront, only a few short steps west of the Vallejo Ferry Terminal (the Ferry Terminal Address is 289 Mare Island Way Vallejo California)
Directions: click here. Hey, you can get there by ferry and enjoy a scenic water ride too.

2 thoughts on “The Northern California Pirate Festival at Vallejo”