It’s very simple: there is no other house in the world like the Rombeiro’s in Novato, north of the Golden Gate Bridge. At least, that’s what the owner, Ed Rombeiro, says with a Santa hat, beard and plush red jacket in front of his Christmas Wonderland house. Every evening from the first Saturday of December through the New Year’s, from 6 to 10pm, the Rombeiro’s turn on the power switch to 100,000 light bulbs through the entire house.

There’s a neon sign outside that says “Open” and it means just that. Please come inside the house and visit every single room 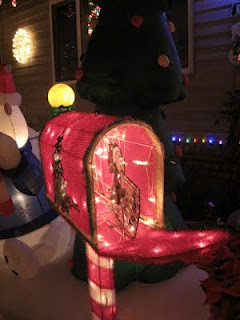 except the master bedroom. Now, that is something.

I first read about that house on SFGate through a 2005 article entitled Merry Glitzmas. I knew that some people went all out decking the hall but opening their house to the public? That sounded crazy. I needed to see it by myself. Arriving on Devonshire Drive in Novato, there were already some pretty nicely decorated front yards. However the number 34 outdoes everything I’ve ever seen in suburbia – with a completely personal take on the holiday house. 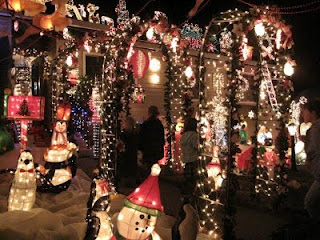 For the personal, Mr. Rombeiro greets people in front of his house with a smile and welcome phrase. Inside the house, his cousin and nephew docent and hand candy canes to visitors.

Just to give an idea of the popularity of the house, in 2009 they went through 40,000 candy canes. Now for the aesthetics.

The front yard is entirely covered with fake snow, twinkle lights and blow-up snowmen, complete with a spinning carousel, animatronics and my girls favorite feature, a lighted mailhouse that opened to display a small Santa. 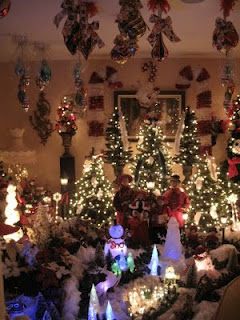 As you walk in, there’s barely an inch on the walls, ceilings and floors that isn’t covered in Christmas-related regalia. Totally impressive. The first room drew oohs and aaahs from my girls and with eyes wide open, they walked on the rug trying to take in the Christmas extravaganza.

As we progressed, our eyes meandered from decorated dining tables to teddy bear fir 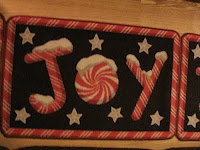 eplaces, from Santa chairs to Joy floormats. My friend wasn’t exaggerating when she told me it was Christmas down to the butter dish. It’s down to the floor mats.

The ceilings, though taking a back seat in terms of visual overload, are as decorated as the rest of the surfaces. It’s a storm of Christmas balls, ribbons, wreaths, candy canes and icicles hanging abo 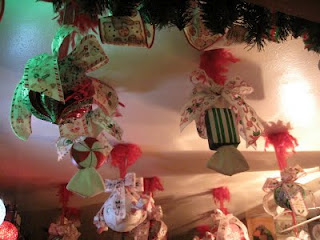 ve your heads as you explore the underworld.

The train room with a car-size snow village set up got my girls glued stiff in front of the white picket fence during a very long time. It’s a room any child or adult would find absolutely fantastic. There is so much detail, so much going on everywhere you turn your head that you could easily stay there an hour and still discover new scenes.

In the same vein as the grand display at San F 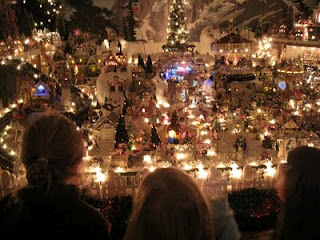 rancisco’s Hyatt Regency in the lobby, this huge snowy lansdcape has skiers sliding down slopes, children making snow angels, skaters gliding on ice rinks, snowboards snowboarding. You get the idea. Winter wonderland, again. Last but not least, the really interesting part of the house tour consists of the two back rooms. 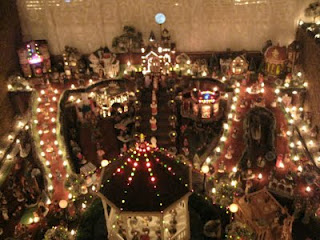 rom the Azores, that Portuguese archipelago in the Atlantic Ocean smack in the middle between Europe and America. Being Portuguese, it is heavily Roman Catholic. To honor their native island called San Miguel, the Rombeiro’s dedicate one of the rooms to the San Cristo de la Las Milagres, a spring festival that includes a procession of the saint Senhor Santo Cristo through town followed by street festivities. The festival is 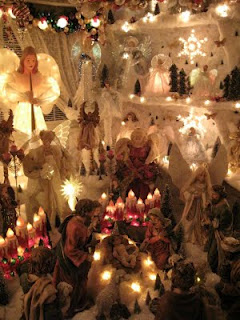 very important in the life of the island.

So if you go to Novato, do check out that room and listen to the commentary of the Santa Elf that night. I talked with a cousin who described the beauty of her island and Sete Cidades, two mountain lakes side by side, one green and one blue. If I could, I’d be on a plane tomorrow. As a Christmas parallel to the Rombeiro’s origins, the next room displays a lavish Nativity scene with enough angels and archangels to outnumber any army of snowmen. This, to me 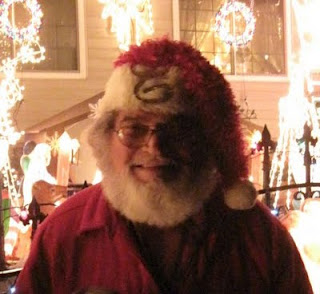 , represents the essence of the house. Ed Rombeiro may be dressed up as Santa in California, but the Azores remain his origins and he is proud of them.

After the two last rooms, each person who’s on the good list – everyone is – receives from another Santa Elf a nice big candy cane. As far as my girls, the candy canes lasted 5 minutes. I went to thank Ed Rombeiro for his house. He is a very gracious man. There is a little donation box his house so I left a bank note for his electricity bill. Which brings me to the white elephant.

How do they do it?

Understandably, the Rombeiro’s have been featured on all local newstations and newspapers. Could they just call it quits one year and let their decorations gather dust? I mean, the electricity bill must be as impressive as the display. The tour is free. I asked Ed Rombeiro if he had LED lights and he laughed saying they were too expensive and it would be a waste to get rid of all his equipment. Fair enough, he’s well geared up.

So Ed and his family will probably continue to wake up one August morning and say “Let’s get the Christmas stuff out!” Because that’s when they start each year: in August to be ready in December. Darn, I would hate to do the storage part in January but hats down to the over-the-top Rombeiro’s Christmas house.

One thought on “The Rombeiro’s Christmas House: 34 Devonshire Drive, Novato”