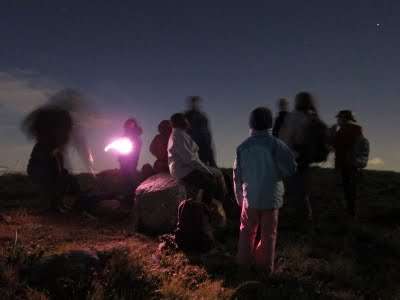 > Night Hike with Kids: “The Stars of Harry Potter”

Night Hike with Kids: “The Stars of Harry Potter” 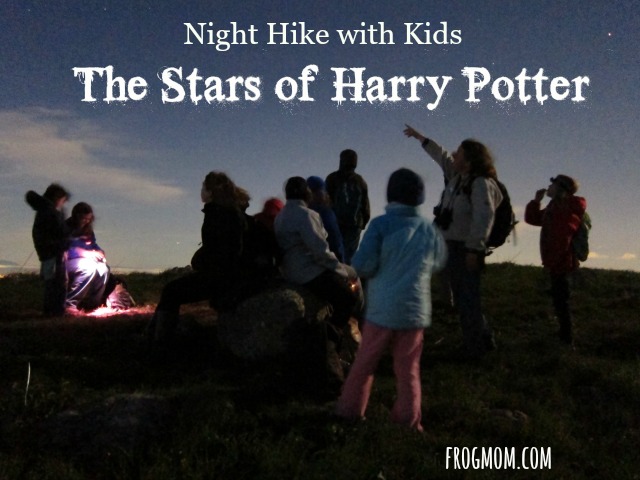 The stars of Harry Potter are all up in the night sky–did you know that? To learn about them, we went on a Harry Potter hike on the spine of the Santa Cruz Mountains and listened to wonderful stories on the astronomy connections of the Harry Potter books, on why J.K. Rowlings named many protagonists with stars, and learned to ID owls at night by sound and silouhette. To top it off, we even spotted a mysterious great horned owl perched high up in trees. Can the stars of Harry Potter get any more atmospheric?

My 7-year old and I attended a night hike organized at Russian Ridge Open Space Preserve by the Midpeninsula Open Space District, joined by my friend Inga and her 8-year old son. It was, simply put, fantastic. The description read “What do Draco, Sirius, Regulus, and Bellatrix have in common? Find out on this relaxed 2.5 mile walk where you’ll experience the magic of daylight to dusk to darkness with docents.”

I wasn’t sure what to expect but sure hoped for some fun stargazing and basic astronomy. After 3.5 hours of trail wandering, we had discovered a whole new side to Harry Potter, one studded with Greek mythology, faraway constellations and dragons thrown in the sky by angry goddesses, sharing names with Harry’s dreaded Draco Malfoy schoolmate at Hogwarts. Who knew? 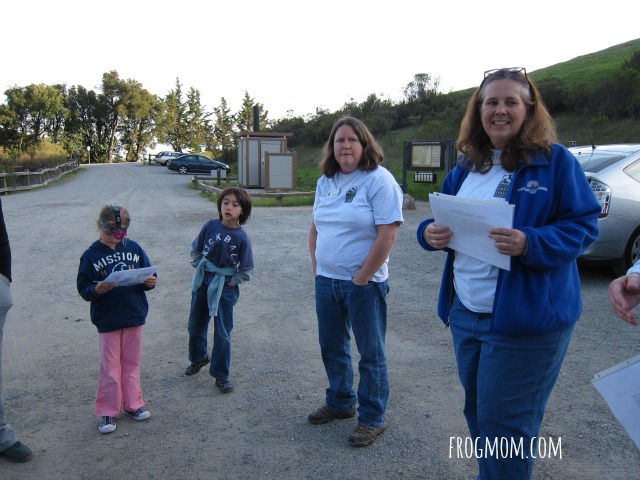 We started in broad daylight at the parking lot of Russian Ridge. In case we weren’t familiar with all Harry Potter (HP) characters, the docents conducted a mini-quiz on the houses at Hogwarts, the names of main students and professors, the game played by witches and sorcerers, and more HP folklore. Good news, we passed!

Our group included 5 children (from 7 to 12) and 7 adults. Suffice to say that the younger crew was on top of the HP game and we adults, scrambled behind. These kids sure can remember a good story and turn it inside out to answer any question.

We set out on the trails as the light of the sun turned from bright white to golden. Walking on the dirt-packed path, I saw our shadows get longer and longer and darker and darker.

At the first stop, Karen brandished a folder and pulled out carefully crafted posters on Luna Lovegood, the witch girl who took part in the second wizarding war. She explained to the kids that Luna means moon and proceeded to talk about the faces and phases of the moon. Looking at her watch she said “The moon should be up by now.” We looked in the sky but couldn’t find it until someone shouted “Moon!” There it was, our moonrise. 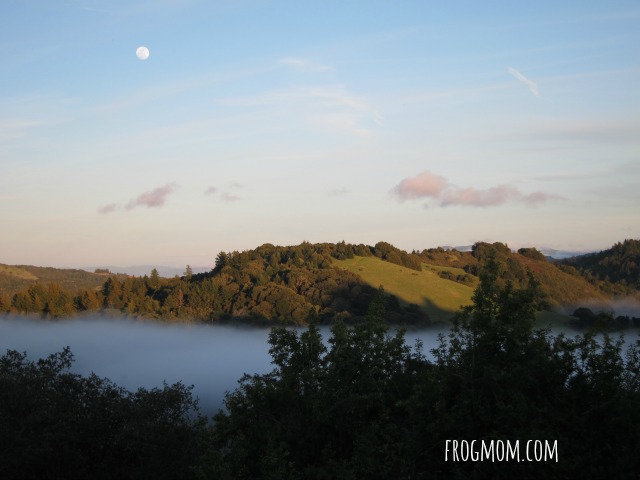 At our second stop, Karen’s backpack revealed a blue felt panel with cut out silhouettes of local owls so we could talk about Hedwig, Harry’s personal owl. As it turns out, Hedwig is a snowy owl, an owl unlikely to be ever spotted in California – this species calls the arctic tundra home. However common Northern California owls include the barn owl, the great horned owl, the burrowing owl, the western screech owl, amongst others. 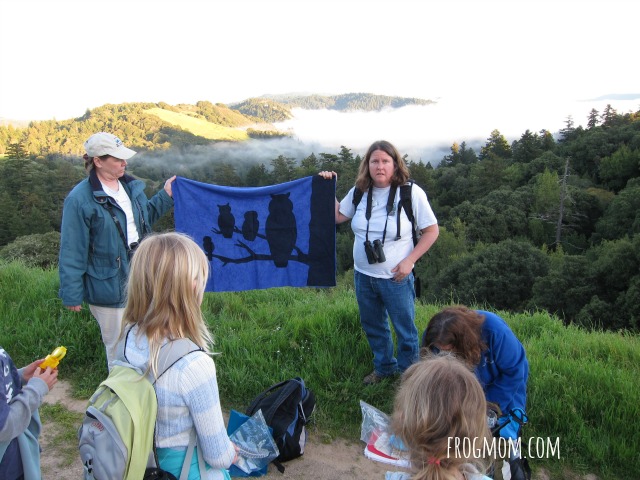 With so many owls, how do you identify them? To everybody’s surprise, Karen extracted a CD player out of her backpack, set it on the ground and played sound recording of various owl calls. Neat! I could tell the kids enjoyed that part, particularly the harsh cat-like screech of the barn owl.

On our way to our next stop, Cathy called out “Coyotes!” On the opposite ridge, two coyotes were tracing their way through the grasses. Exciting! She adjusted her binoculars and passed them around so we could see them before they disappeared.

With the sun setting within minutes, it was time to sit down and have dinner. We all made ourselves comfortable on the gravelly dirt road and admired the views as the fog wrapped its fluffy clouds around redwood forests while the sun was saying goodbye. At last the sun dropped below the horizon and dusk settled in. We had dutifully eaten our sandwiches and treats and were eager to get moving. It was crazy how much colder it got after the sun set. We needed to warm up! 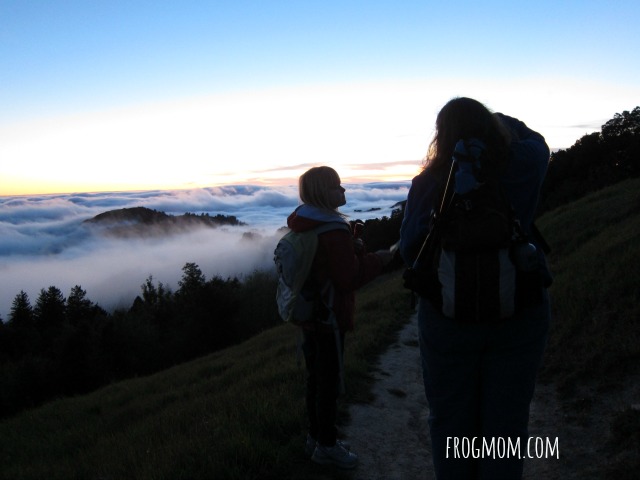 Karen advised us not to use our flashlights just yet. She explained that our eyesight adjusts to night conditions in a matter of minutes and our eyesight after a minute in the dark is 100 times better than right after we switch off the lights. Indeed we didn’t need lights to guide our footsteps. If anything, the surrounding darkness sharpened another sense – our hearing.

Nature was quiet where we were. Very quiet. Nothing seemed to move, or did it? Kay and Cathy pulled out their binoculars and showed us a pointy shape on top of a leafless tree. Sitting on top of the highest branch was … a great horned owl. 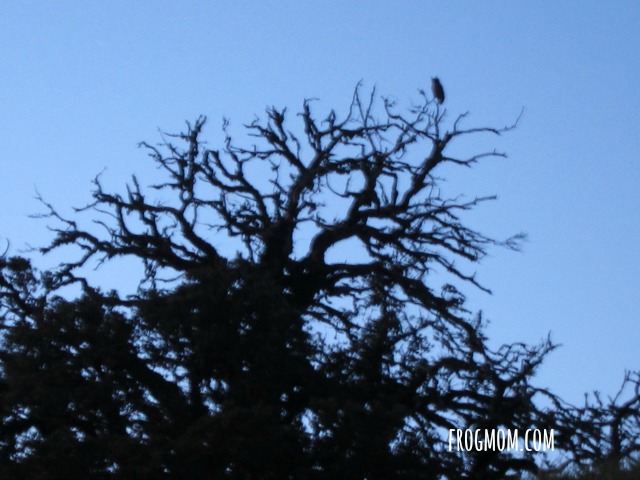 Cathy showed us the typical Batman-shaped ear tufts on the head. Though we weren’t exactly discrete, the owl didn’t fly away. It stood there and pivoted its head a few times. Was it sizing us up by sound? Possibly. Great horned owls are known to have the most acute sense of hearing in the animal world.

They can also spot a prey from 100 yards away with 5% of the night vision we’d need so clearly, that owl knew where we were. Regardless, we were enthralled and I kept setting my camera stand up the hill to capture a steady shot. I didn’t even end up with a sharp photo, but I was happy enough with the result.

Kids took turns at showing their enthusiasm, pointing us to the big bird as if we hadn’t seen it. We could have stood on that hill a long time but the clock was ticking. We continued on the trail. 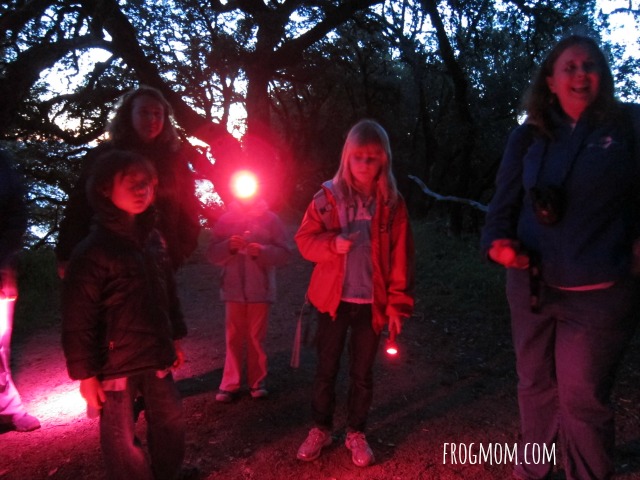 In a dark wooded grove under the thick canopy of oak trees, we listened as Karen and Kay talked to us about night vision. Ironically all the kids in the group – who had great eyesight – had switched on their flashlight or headlamp whereas the adults refrained. Guess we were trying to be “authentic,” understand the physics of night vision. I liked it better without the lights anyway.

The next trail segment was going to be an interesting challenge. Karen asked us to walk single file, separated by 3 to 5 feet from others, in complete silence, until we reached an open meadow. We were to sense the sounds of the forest and differences in temperature. Softly we started to walk, all wrapped up in darkness.

“Who switched on such a bright light?!” I thought loudly as a ray of white light shone on my face. It was the moon! Just two days shy of being full, its silvery glow was piercing through the trees and startled us all. Ah, the moon. A gentle swooshing sound passed over our heads in the forest. Bats. Of course, nocturnal animals. We all reached the open meadow, one by one, and dared not utter a word for fear of breaking our silence vow. 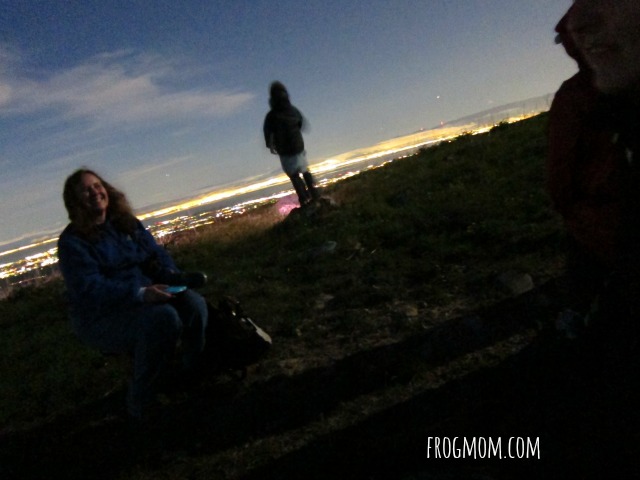 All gathered, we reclaimed our voices and talked about the experience. None of the kids found it scary but everybody agreed it was cool. For our last stop, we climbed the ridge to Borel Hill, the highest point in the park. Sitting around big rocks, we listened to the theme of Hedwig on a Harry Potter soundtrack, a most magical music at night outside. My 7-year old loved it and asked Karen twice what the song was so I could get it for her later.

To get in the proper owl mood, here’s a beautiful version of Hedwig’s Theme.

It was star time, constellation time, time to spot the big dipper, learn about the bright star Sirius, the Orion star Bellatrix, the story of Draco the Dragon constellation and Hercules in the garden of the golden apples, the three-headed dog Cerberus who guarded a door. It was my favorite part of the hike, listening to stories about stars under the stars, and loosely connecting the dots of the Harry Potter mythology. Wow. That was incredible and the end of our hike.

4 thoughts on “Night Hike with Kids: “The Stars of Harry Potter””