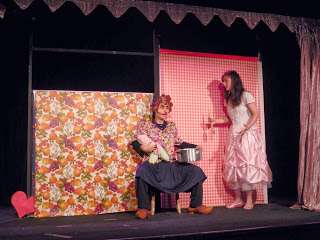 Paris’ performing arts scene is a candy shop for children.

Take any given week in the year and you’ll find no less than thirty theatre shows or musicals for the younger set, a dozen guignol puppet shows and if you’re lucky, festivals or fairs. Now that my girls were old enough (3 and 5) to enjoy some of them, I was determined to make the most of it.

The Theatre du Funambule is a hole-in-the-wall theatre in the 18th arrondissement, right behind Montmartre and its crowded streets.

Actresses Marie-Laure Malric and Marie Simon adapt Alice in Wonderland on stage with a French flavor.

When the White Rabbit misbehaves with Alice, she threatens to bring him to her mother who loves to eat rabbit in a mustard sauce! Another scene features an old duchess stirring a pepper soup with too much pepper. part theatre, part puppet act, the show was a delight to my girls who helped Alice solve the mysteries of the story.

Despite minimal sets, the story unfolds very neatly thanks to the energy, Italian face masks and various costumes of the characters. A very nice treat for ages 3 and above.

Our second endeavor led us to the Theatre Astral at the Parc Floral east of Paris for the delightful mazician show of Paul Maz, Le Magicien de Papier.

Paul Maz is a former journalist reborn as a surrealist magician, a word lover mixing Federico Garcia Lorca and Paul Desnos’ lines with live music, magic and paper cuttings in “The Paper Magician”. The thread of the story is simple.

The Pere Quenot lives on top of the hill Montmartre and collects old newspapers to recycle them as paper cuttings that take on a new life. In doing so, he also creates magic for children using the magic words “Pere Quenot, Perqueni, Perquena.”

As the Pere Quenot juggles playing his concertina and creating paper figure garlands and stars, he invites two children on stage to perform paper magic with him.

The first one was an eight-year-old girl named Louise who got to create knots on a magic rope hiding in a paper bag.

The second one was a four-year-old boy named Leo who made a “magic paper tree” with Paul Maz to the “oohs” and “aaahs” of the audience.

Six or seven short scenes played out on stage, each involving a wonderful and poetic resolution.

For this show, we were joined by my two-year-old niece and she was as amazed by the performance as my little girls.

I couldn’t recommend Paul Maz highly enough for anybody who wishes to see a different kind of magic. I’m ready for seconds anytime.