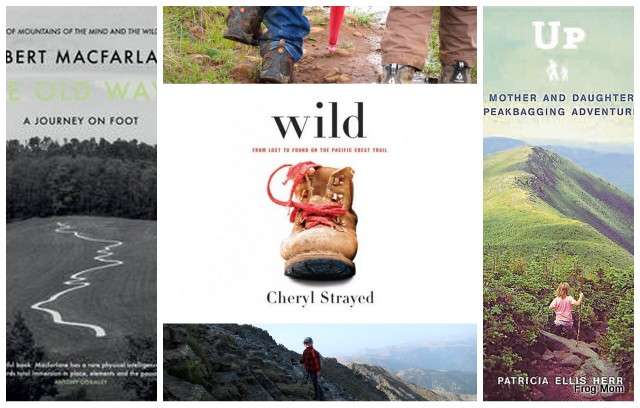 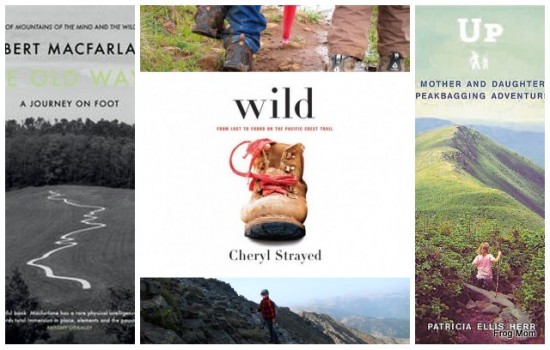 Most of the books I read on walking are hiking guidebooks but on the rare occasion, I do read a book about the act of walking. About a walking adventure. About how walking changed someone’s life. This year, three books stood out on my bedtime table and I wanted to share them, both as spiritual and inspiring voyages.

Up: A Mother and Daughter’s Peakbagging Adventure

That book rang very close to home for me. It’s the story of a hiking challenge undertaken by a mother and her five-year old daughter – hiking up all forty-eight of New Hampshire’s tallest mountains. Girl power all the way. Patricia Ellis Herr’s lighthearted writing takes the reader up almost every single one of the peaks, with funny anecdotes on  who they meet – some people not so nice, others a real pleasure, a grumpy grouse – and her daughter’s reactions. I truly enjoyed the mother-daughter dialogues and how Alex managed to learn life lessons while hiking. This girl – and her young sister Sage, who’s shaping up like an amazing hiker as well – is an example of fortitude and perseverance. What the girl wants, she makes it happen.

I found a little bit of my girls in that story and of their determination on some of the hikes we’ve been on. I loved all the questions asked by Alex and Sage, all the chocolate they sate as rewards. As Ellis Herr nicely wraps up on her last page, her girls learned that “little does not mean weak, that girls are indeed strong, and that practically anything is possible.” That’s the philosophy I try to instill in my girls and I would like to recommend this book. First, it’s a short fun book to read. Then it’ll inspire you to have faith in girls and push them as hard as boys because there’s no reason there should be any difference.

The Old Ways – A Journey on Foot

There’s more than meets the eye in a path. Look for layers. Peel it down to its core and learn its story. You’ll be surprised.

I first heard a chapter of this book read aloud by the author for PRI’s The World. The chapter was called “Walking the Broomway” and described an underwater path you can only walk when the tide is out. Robert Mac Farlane walked this path and many others, writing about the origin of paths and how landscapes shaped local cultures but also on geology, linguistics and nature writers. My favorite chapter was a ritual walk across the Cairngorm massif (Scotland) from south to north, a walk in memory of the author’s grandfather who died on the far side of the mountains and to whose funeral he was walking. Simply beautiful.

Mac Farlane teaches Post-WWII English Literature at the University of Cambridge and it shows. His erudition makes each page or thought a poem to read out loud in your head. Some sentences I re-read because I liked the sound of them so much. In the opening chapter, Mac Farlane writes about animal tracks in the snow. Here is his voice: “The moonlight, falling at a slant, deepened the dark in the nearer tracks so that they appeared full as inkwells. To all these tracks I added my own. The snow was overwhelmingly legible. Each print-trail seemed like a plot that could be read backwards in time; a series of allusions to events since ended.”

If you like the writings of Gary Snyder, the woodblock prints of Tom Killion or the meditative state of a long walk in nature, this book is for you. It will inspire many more walks and perhaps, a different perspective on the trails you follow in the future.

Perhaps the better known on this list, Wild made the news and was hailed as a remarkable memoir by the New York Times. The author, Cheryl Strayed, was interviewed on Oprah.com. Everybody but me thinks it’s an amazing book and I still don’t get why. Wild recounts the months Chery Strayed, then 26 years old, spent hiking alone on the Pacific Crest Trail from the Mojave Desert through California and Oregon to Washington State. Wild is both a hiking journal and a diary on the loss of Cheryl’s mother, a diary of her failed relationships and hard life. It’s a memoir by a woman who had a lot of things go wrong in her life, yet pulled herself together to hike one of the most iconic American trails. Given how unprepared she was, it’s a miracle she made it at all but what makes the reader turn the pages is not so much the National Geographic-type descriptions as the emotional wanderings inside Cheryl’s head and life.

I bought this book because it had been recommended by two friends. “You’ll love it, it’s about hiking!” they promised. And yet I never clicked with the writing, the story, or the emotions. Obviously the writing had been edited to a T and the chapters followed each other seamlessly. I just could not relate with the journey on the page. In a way, I wish I had been able to because so many found the book gut-wrenching if not downright transforming. Not me. The introspective bits bored me. The only reason I’m featuring the book is because it is inspiring. It is inspiring to see that against all odds, an unprepared woman on a tight budget could hike the Pacific Crest Trail solo. I like the nature aspect of this book. Strayed really brings the PCT to life and makes you want to get a new pair of boots to hike into the wilderness. For that, Wild is worth reading. Perhaps you’ll find more in there too.