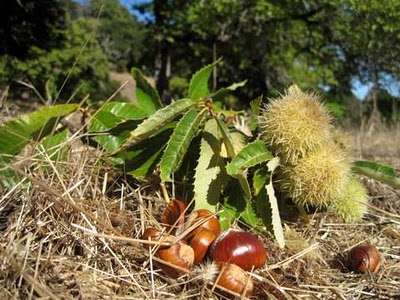 > ‘Tis the Season to Pick Chestnuts in the Santa Cruz Mountains

‘Tis the Season to Pick Chestnuts in the Santa Cruz Mountains

On Halloween morning, our family drove down the Santa Cruz Mountains to Skyline Chestnuts, one of our favorite fall season farms. Late October and early November are supposedly the best time to pick chestnuts, a rare treat whose short season only lasts from mid-October through late November. If you don’t squeeze in a visit by Thanksgiving weekend, that’s it for the year – gotta be patient til next year.

As we showed up at 10am, several families were already hard at work gleaning and filling huge bags of chestnuts. No, not bags. More like bushels and barrels. Man were they chestnut-nutties! Not to worry though. The trees were loaded and clearly, the harvest was not peaking yet. As a matter of fact, here is what Hans Johsen the owner wrote on the website’s forum on November 10, 2010: “We are now in full swing and the chestnuts are still falling like rain! Large size and high quantities prevail.” There, you have it. Hurry before the season’s over!

We went with my mom and I brought a folding chair so she could sit it out under the trees. This being Halloween, two little girls were rummaging through fallen leaves in princess dresses, their sparkly skirts flickering in the morning sun. Other kids were swatting branches to make chestnuts come down faster.

My own girls were trolling the grounds lousily looking for shiny brown nuts, outfitted with long pants and rain boots. In case you don’t know, chestnut burs are prickly – very. Once I had to get the tweezers out to help the daughter of a friend who handled the burs without gloves. I prefer to manage without gloves by using my feet without crushing the fruit. While most people twist the burs between their gloved hands to pry them open, I simply twist them with a swish of the foot and tada!

It’s the fourth year in a row that we go chestnut picking at this orchard and through the years, here are a few things I learned:

It took us an hour to glean 16 pounds of chestnuts, my husband being the overachiever chestnut person and I being the easy-going chestnutter that day. Amazingly, each year we pick more than the previous year. Why is that? My theory is that we’re slowly being domesticated by the chestnuts and as we progress (read, improve), we want more. We used to be newbies and thought chestnuts could only be roasted on an open fire. What a joke!

After I bought Annie Bhagwandin’s The Chestnut Cookbook, I started reading it and discovered a cornucopia of recipes, cooking methods and other essential chestnut stuff. Two days ago I roasted a pound of chestnuts in a dry pan (not even a chestnut pan, just a regular one) and it worked wonders. My fingertips are still sore from the peeling part but the roasted chestnuts made a great school snack for my girls. According to the book, there’s an easy way to slice them in two, pop them in boiling water and squeeze them out of the husks once cooked through. Can’t wait to try that for the Thanksgiving stuffing.

The only disappointment of the day was finding out that Mr. Johsen was already out of his chestnut honey. He’s set up beehives in the hills and chestnut honey is my all-star favorite honey for its strong and wonderful flavor. I thought for sure in October I was early and would score a jar this year. Not so. People start calling him in August to secure a jar of the chestnut honey. Sigh. I walked away with a jar of the eucalyptus honey, making a mental note to call in July next year!

Practical details: they’re all on the website but I’m copying them below for easy reference.