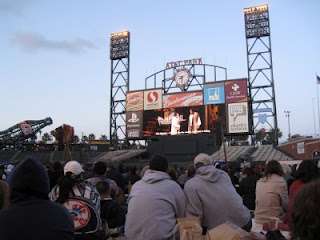 > Tosca at the Ball Park

Tosca at the Ball Park

“What’s more telling of opera than a hotdog?” That’s how my friend John greeted me as I returned from the concessions stand with three hotdogs at San Francisco’s ATT&T Park for the Tosca Simulcast. Tosca, one of the most celebrated operas, was transmitted live from the War Memorial House at the Ball Park on a 103-feet long HDTV screen.

Free opera for the masses, what a fantastic initiative! Opera should not be reserved to the few who can afford the cost of full-staged production with orchestra at an opera house. If opera wants to live on, it also needs to go to the streets just as opera arias did when people sang “Va’ pensiero” at Verdi’s funeral. These composers were rock stars then.

Their music is still as beautiful today and should not become extinct for financial reasons. That’s why the Ball Park is such an appropriate place for opera simulcasts. The performance is free. And … you can get your beer, popcorn and hotdog all while listening to beautiful music that transcends centuries and countries. Plus, the Ball Park has a few interesting twists sure to appeal to the non-opera crowd.

As free coded ticket holders, we got in half an hour early and spread our blanket on the lawn for our picnic. The children very much loved that.

Before the performance, everybody rose to sing The Star Spangled Banner. I was in the hot dog line then and grinned from ear to ear as people walked by with their hand on their heart.

At the intermission, we were treated to a rendering of “Take Me Out To The Opera” where everybody sang the words based on the famous baseball song. The best part, however, was how much people were involved in the story.

In theory, it’s not a setting everybody can relate to. Rome, turn of the 20th century, a celebrated opera singer, a mean police officer, an artist on the run, the gallows ready. But hey, love is universal. So is injustice. Never before have I seen people cheer and clap so wildly at a woman stabbing an oppressor on stage. In the exit line, a young guy went “Man, did you see how she got him? Not once but twice, even in the back!” That’s the kind of reaction opera should trigger. It means it’s very much alive.

Now do yourself a favor and don’t forget to sign up for the next Simulcast on September 19. It’s going to be Verdi’s Il Trovatore.