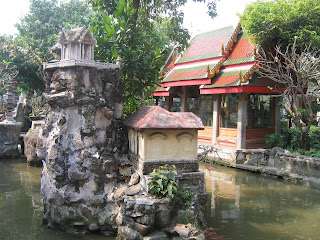 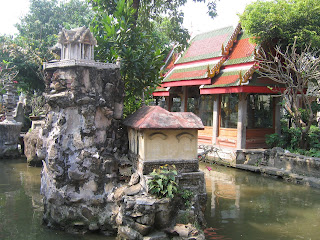 Bangkok sometimes reserves surprises in the most unlikely places. Wat Phrayoonwong, a Rama III temple near the Memorial Bridge on the Thonburi side of the river, is host to a colony of dozens of turtles. The turtles are such a staple at this temple that worshippers come from everywhere to feed the turtles and pray for long lives.
Wat Phrayoonwong is an oddity in the realm of Thai temples because it mainly consists of a stucco island on a pond with a surrounding walkway replete with miniature replicas of houses hosting ashes of deceased locals. The replicas (some of them boats or ornate storied little buildings) are weird but interesting for children who might see them as doll houses (except for the black and white picture of the “inhabitants”). However the main attraction here is a four-legged amphibian. 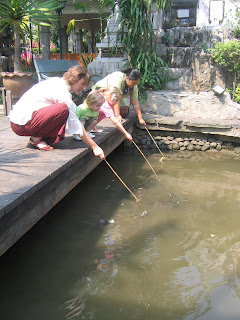 When you enter the temple, pick a plate or two (each 10 Baht or $ 0.3) of turtle food: split fish balls, cut up bananas or balls of dry food. The stench emanating from the pond combined with the food “ripening” in the sun with flies can be slightly overpowering, but it’s well worth a try. Then everyone picks a three-foot long sharp stick and the show begins. We squatted by a small terrace right by the entrance where we’d seen a few turtles. Some were baking in the sun, some were swimming, some were walking around. The bananas were a hit. Toothless creatures, the turtles had a harder time with the fish balls.
My two girls were squeaking with delight. “Maman, help me feed another one!” they asked. I was holding on tight to my accident-prone two-year-old because the idea of jumping in this marsh was really not appealing. After a while, the turtles gave place to humongo 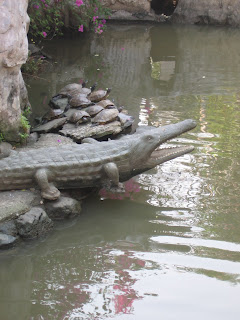 us catfish fighting for the fish balls (fish cannibalism, sort of). We could see their big whiskers frantically swaying under the water and their oval mouths wide open. As the turtles grew tired of their treats, we moved further along and when even the catfish showed little interest, I threw a plate half full of fish balls up in the air. Our little excursion thus finished in a fish ball firework followed by a squirmy battle under water.

We were far from home but to please my little girls, we took a tuk tuk on the way back. Ah, the simple pleasure of inhaling bus fumes in a traffic jam in Bangkok’s Pahurat neighborhood lined with fabric shops…