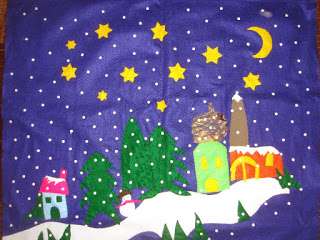 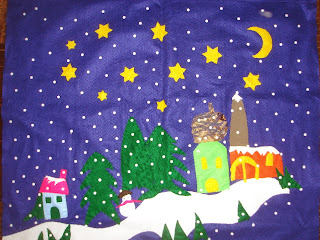 Kudos to my mother for spending countless hours on her sewing machine last year with needle and thread. This year was the second year I was performing Clement Moore’s poem “Twas the night before Christmas” with hand puppets at Big City Montessori School and the children loved it.
Picture this. One hundred children seated neatly in rows, bursting in laughter when a cat appears on stage instead of a mouse. “That’s not a mouse!” they all shout. Of course, “not a creature was stirring, not even a mouse” doesn’t work with a cat. But that’s the point. The cat comes back three times and the more he shows up the louder the laughte 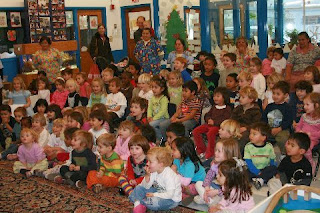 r. Ah, then and only then does the mouse appear. “Watch out! The cat is chasing you!” yell the children. Good chasing scene (narrow escape for the mouse) and then we proceed with the narrative.

The children were nestled all snug in their beds,

While visions of sugar-plums danced in their heads.
Our puppet children of course were wide awake, kicking and jumping on each other. Another roar of laughter in the crowd. They find this hilarious, particularly the giggling little sister in blue. The narrator (my friend Lisa) asks to the children if they shouldn’t go to bed but they won’t do it. So a deep voice comes from behind the stage.

“Off to bed children!” 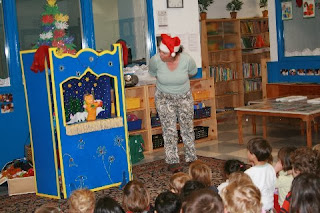 The children’s dad appears and the children go to bed. We could not resist another hide-and-seek scene so the dad went looking for Santa Claus three times in odd places (the cellar, the kitchen and finally his shoes) while Santa Claus and a string of tiny presents danced through the air.
‘There’s Santa! There’s Santa!” yell the children again.
Sleepy after a long day, the dad tries to go to sleep but the naughty cat trakes away his pillow three times. Big success the pillow scene!
Second Act
The scene opens up with the dad still looking for Santa. Fortunately the cat helps out and suggests to the crowd that they should sing a song starting by “meow meow meow”. The children picked up on it right away and before we could ask them to sing, they were all singing in unison “Jingle Bells”. I was blown away. What an audience!
The lovely part in this scene was playing the Nutcracker’s Flower Waltz while having Santa and Rudolph deliver the presents at the foot of the tree. This being San Francisco and there being a candle holder on the fireplace of the set, some children exclaimed
“There’s a menorah!”
Yes, everybody here has a menorah AND a Christmas tree. PC baby.
Third Act 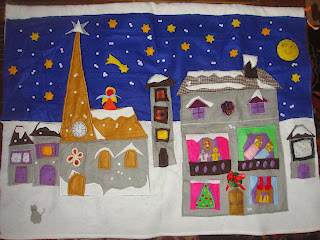 Once we lifted the curtain on a snowy city landscape, the children started “oohing” and “aahing” and some started clapping, others said that these were wonderful gingerbread houses and finally all the childen were clapping just in appreciation of the set. Wow. My mother better be proud of herself.
At that point, the fun part of the act was the dad discovering the presents and an odd looking creature on stage: a musical Tyrolean marmot! Yes, to the children’s excitement, the marmot starts yodeling and swaying after you push a button in her left foot. That’s what you get for attending a retail client event at the Bier Fest in Munich.
It was time for us to close the act and do our goodbye dance. We started playing “Feliz Navidad” and before we knew it, all the children joined in the singing. All my puppets came on stage for a final bow and so did I.
Puppets work like crazy with children. I still can’t get over it and I’m thrilled beyond belief. I’ve asked a marine scene set to my mother. My next goal is an underwater “The three little clams and the big bad shark”. 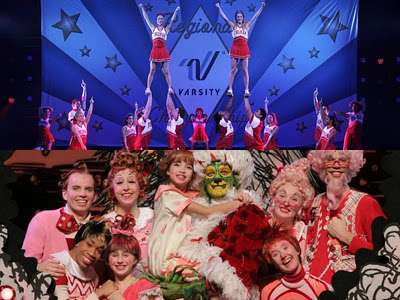