When the news that Ukraine was being invaded by Russia filled our news feed on Thursday, I was stunned like the rest of the world. Why? How? It all seemed very surreal.

It’s only been a few days and from London, I feel completely powerless. These Ukrainian rye cookies are an attempt at supporting Ukraine from a baker’s heart. Apologies if they look diseased on the picture, I need to work on my icing skills.

The good news is that with only 6 ingredients, they are dead easy to make and shine best when dunked in a cup of tea (or other hot drink). For anybody on a low-sugar diet, the cookie without the icing would be a perfect, if slightly monastic, snack.

Initially, I wanted to bake a Ukrainian cake and started browsing online but finding any interesting Ukrainian recipe, literally any, was proving tricky. Most of the recipes I found came from some tourist board, were a mish-mash of Russian, ex-USSR or Finnish and Ukrainian food. I couldn’t tell whether they had been kitchen tested or improved, and struggled to find a good English-language Ukrainian cooking blog. Good Ukrainian food blogs are probably all in Ukrainian or Russian, is the conclusion I reached.

One Ukrainian-American food blog stood out, The Pure Taste, and promised traditional Ukrainian and Russian dishes straight from Marina based in Massachusetts. It sounded great and I signed up to download her free Ukrainian cookie recipe book, but looking at the recipes, I had a pause. Some of the recipes looked adapted for American kitchens (peanut butter cookies in Ukraine, really?) and I was certainly not going to bake “USSR anniversary cookies” to support Ukraine. Never mind. Great pics, though.

Back to the drawing board, I searched for rye-based Ukrainian cake or cookie recipes. I discovered rye in 2021 during lockdown and know how important it is as a grain in Eastern Europe. Pumpernickel this, rye cracker that, rye is the main bread cereal east of Germany in Europe. Its nuttiness also brings a really interesting taste to any baked goods, which makes it a firm favorite in my book.

Surely, I hoped, there must be rye desserts somewhere? Obviously, most search results focused on Ukrainian rye bread (which I am also going to bake) but one recipe was titled Ukrainian rye cookie recipe so I clicked on it. Found it!

Credit for this Ukrainian rye recipe goes to Canada-based Olga Drozd author of Ukrainian Classic Kitchen and International Cuisine. The fact that the website’s title says Ukrainian and international cuisine immediately reassured me that it was probably on the authentic side of things. Who but a proud Ukrainian chef would write international cuisine as encompassing all of the cuisines outside of Ukraine? Granted, the website dates back to 2011 and has the look and feel of a second-hand Trabant, but it features no less than 1,000 Ukrainian recipes so it’s a golden find, all things considered.

Rolling up my sleeves, I got to work in my kitchen.

The dough was intriguing, using eggs and sour cream as wet ingredients in addition to only 4 dry ingredients. This couldn’t have been any simpler. Mix and knead, that was it.

Rolling out the dough was very easy and in 15 minutes, I had 40 round cookies ready to go into the oven. They held their shape really well during baking and didn’t spread at all. I would go as far as saying that it was tricky knowing that they were ready because rye is quite a dark grain, but I relied on my sense of smell. They smelled really nice after 20 minutes.

To bring some visual Ukrainian character to Olga’s Ukrainian rye cookies, I decided to ice the cookies in the colors of the Ukrainian flag. I had icing sugar and yellow and blue food coloring in my pantry, which made basic water-based icing really easy.

I enrolled the help of my 16-year-old daughter and before dinner when all the cookies had cooled down, we set to ice all 40 cookies on a rack. She did yellow, I did blue. She was precise, I was messy, but the end result was quite satisfying and glossy. Then the cookies dried and lost their shine. As I said, I need to work on my icing skills.

After a night of drying, my messy take at Ukrainian rye cookies got the message across rather well and they travelled with me on my bicycle.

I brought them in a wooden box to the Saturday morning race at the Serpentine Swimming Club and everybody immediately knew they were Ukrainian cookies. To avoid any confusion, I had printed the recipe and displayed it proudly in the box.

It was a success, truly it was. Several people praised the original taste of the cookies, some came back for seconds, and all agreed on one element. These cookies were tough. If you have wobbly teeth, please avoid them. This is the Ukrainian equivalent of hard tack.

If you decide to go for a simpler version of the cookie, simply forego the icing and revert to Olga’s base recipe. It is delicious as it is.

Now, before you make these in your kitchen, a few words about…

If you want to do something for Ukraine, the LA Times published a list of Californian non-profits you can support and in the UK, The Guardian published a UK-based list too.

Thinking about all Ukrainians in this dark hour. 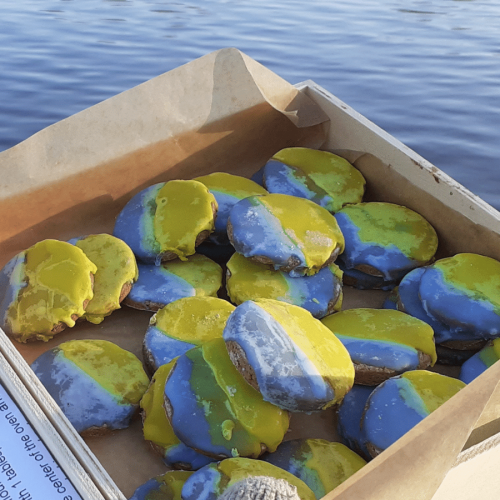