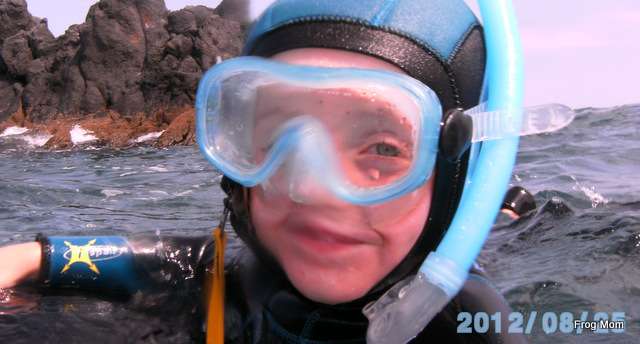 > Learn About the Ocean with Underwater Family Hikes

Learn About the Ocean with Underwater Family Hikes 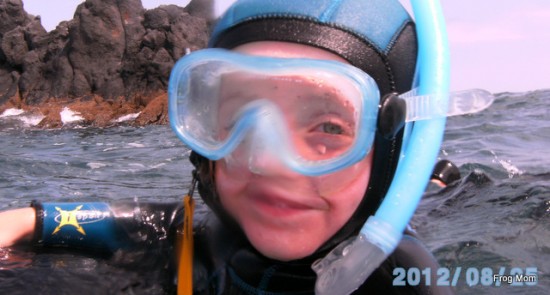 In the movie The Pirates of the Caribbean: The Curse of the Black Pearl, my favorite scene is when Captain Barbossa turns to his crew towards the end and grins as he announces, “Boys, time to take a hike!” In the next shot, dozens of skeleton pirates walk on the sandy bottom around Isla de la Muerta and attack the British Navy’s ships from underwater. Classy, powerful, dreamy. That’s exactly what I pictured when I first read an article about an underwater trail. Underwater trail, I was puzzled, what on earth were we talking about?  Think of it as an aquatic swim beyond tide pools. In the wondrous world of silver fishes, swaying anemones and yawning mollusks, we explored a new kind of trail with wetsuits – no shipwrecks or sword fights included, alas.

The underwater trail we explored is located at Le Cap d’Agde in the south of France. We could take a self-guided visit or book a visit with a naturalist. The latter seemed the best option for my girls since the hike involved wetsuits and fins. It would also give us a better understanding of what we were looking at. I called the number listed in the newspaper Le Midi Libre and asked if there were any spots for a family of 4 in the coming weeks. The following Saturday, we hiked.

In theory the minimum age is 8 years old but I couldn’t leave my 7-year old behind for such a unique activity. I lied on her age (sorry I lied) but I did ask questions regarding safety since she’s far from being a good swimmer – would she be OK with us? How would she breathe? Was there a risk she could sink? Would she be scared or cold? What did we need to bring? To all the questions I got answers that calmed down my fears. Everything was going to be OK.

In this underwater hike, ADENA – an ocean stewardship non-profit – lent us all the gear except for the swim suit. All we needed to do was show up on time in our swim suit. When we arrived on the sandy beach at the ultra-touristy Mediterranean city of Cap d’Agde, we felt completely out of place. Amongst crowds of families in skimpy swim suits wolfing down junk food in flip flops under a blazing sun, we were going to get inside extra-thick wetsuits to better understand the local aquatic life. What a contrast.

There were 10 of us and we all lined up at the small beach hut of the ADENA, providing our shoe size to the woman in charge. In return, she handed each one of us our gear through a window: 5-mm thick wetsuit with head cap, flippers, and snorkel mask set. I had paid extra for an underwater camera and gave the woman my SIM card so I could take the pictures home. My girls suited up with 2 layers of wetsuit. By then, we were sweating like pigs under a scorching sun and the naturalist recommended we go take a cold shower on the beach.

Cold shower, yelped my girls? Absolutely, it was the thing to do and cooled us off for like 30 seconds. Stewing in our wetsuits, we circled around the naturalist and listened to explanations about the Do’s and Dont’s of snorkeling, how to breathe and expel sea water, and the different kinds of fishes, seaweeds and shellfish we were likely to see. It was also a talk about how we could help preserve the ocean by learining more about it. Totally our gig.

Now the part that fascinated me was that we were going to “hike” about 1/3 mile following buoys moored to shallow bottoms. Each buoy corresponded to a different landscape. From volcanic seafloors to small posidonia beds, volcanic rocks, plateaus and slopes, faults, scree, a mini canyon and sandy environments, we would see a whole range of typical Mediterranean fauna and flora. I couldn’t wait to get in there!

Oh, the water was warm like the water of a bath tub. Nothing like the San Francisco Bay. Once we were in, we all timidly looked at each other wondering who would launch into the great big Mediterranean sea first. I think at that point we were still a bit unsure how the whole thing was going to work. Eventually we all got the flippers on and swam away from the shore, following the naturalist who was pushing a small inflatable boat. In it he had the underwater camera. He quickly explained to me how to point and shoot and discouraged me from zooming – the visibility wouldn’t be good enough.

While my 8-year old floated around easily (no wonder, with 10 mm of neoprene!), my 7-year old gasped and coughed a lot. We quickly realized the mask set was slightly too big for her face and she got flooded in. She hung on to the boat and the naturalist expertly fitted the mask set much better. Now we were really good to go.

As much as I wanted to listen to the details about this rockfish changing sex during his life or that anemone providing shelter to small fish, I took off to take pictures. It was too tempting, we were only going to be underwater for 45 minutes! I was also keeping a close eye on my 8-year old who has a tendency to drift and swim away. Indeed, she managed to get away from the group really fast and I had to “shepherd” her back a few times. As for my little one, she held hands with her dad underwater and they both made their way above the different habitats.

Slowly we drifted from murky sandy waters to clearer waters above volcanic rock. The farther we swam, the bigger the variety of fishes. I had a blast diving to take pictures but as you can see, the results are not National Geographic quality. Since I was the only one with a camera, people in the group occasionally pointed items to me with their finger. Now it’s one thing to point to a clear landmark in the mountains but when you point at an itty-bitty fish 10 feet below in the seeming immensity of the sea, it gets lost quite quickly. A few times. I think I missed the item of interest. Other times I just dived and took a picture, hoping for the best because of the delay between the button and the trigger.

It was fun. It was new. However I didn’t learn as much as I would have liked to from the naturalist. There’s a real difference between a ranger-led hike on a regular trail and a naturalist-led hike underwater. If you’re not inches from your underwater guide, you don’t hear and see what he’s talking about. The sloshing sound of the waves, the birds flying above, the occasional plane with a commercial message for beach-goers all create a white noise background that makes it difficult to hear a conversation. When you speak, you speak funny because you just removed a tube from your mouth. Communication ought to be done mentally like in Star Trek. Obviously on solid and dry ground, the whole exercise is a lot easier.

We looped around the farthest volcanic rocks and back along the numbered buoys, vaguely attempting to read the interpretive signs floating underwater. I can’t say we saw exactly what was described and photographed but it could be due to a storm the day before. Stormy days are bad for underwater visibility, they shake things up. Regardless, we hopped from buoy to buoy, encountering snorkeling beach-goers closer to shore.

At the end of the hike, my girls were getting tired and had swallowed too many mouthfuls of salty water. From a water safety and ocean stewardship standpoint, the activity was a complete success. At no point were my girls scared to swim with – or next to – us and they learned that different types of fish live at different depths in the sea. Of course they can’t remember a single fish name but neither can I. That’s what aquariums and books are for. The idea was to follow a trail and witness the changing flora and fauna depending on the landscape. That we did.

Should you wish to follow in our flipper next summer, here is how you can proceed.