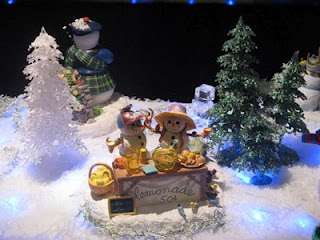 Each year we attend a tree lighting ceremony in San Francisco.

Last year, we attended the Pier 39 Tree Lighting Ceremony. This year we headed to Union Square as it was one 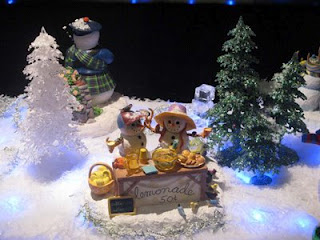 conveniently taking place after Thanksgiving (Embarcadero Center and Pier 39 got an early start) and it seemed only fair to kick off the festive season after Turkey Day.

The ceremony started at 6.30pm on San Francisco’s Union Square but as we arrived an hour early, we stopped at two places before mingling with the crowds.

First, we entered the Williams Sonoma store on Union Square, candy for the eye. These guys really know a thing or two when it comes to service. As we entered the store, we were greeted by hot apple cider cups that 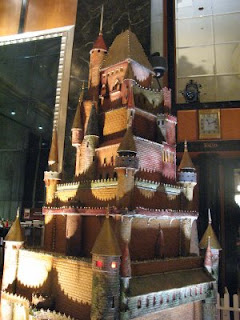 my girls downed with pleasure before asking for seconds and thirds.

Up two flights of stairs, trays of peppermint chocolate bark were awaiting eager hands and again, my girls scored pretty well on the scale of seconds and thirds.

Meanwhile, I picked a bottle of their Winter Forest dishwashing liquid. Not only does it smell like a balsam tree entered your house. It’s also made with essential oils without chemicals, packaged in recyclable bottles and biodegradable. Hurray for Caldrea who developed this earth-friendly line for Williams Sonoma.

Next we headed towards the WestIn St Francis hotel to admire their legendary sugary gingerbread display. As you can see on the picture, it is a pretty impressive castle. All sugar, fondant, chocolate and gingerbread. Tons of it.

Alas, double and triple alas, we already saw it last year. And the year before. In fact it is the 2005 Gingerbread castle that gets “improved” each year. So says the text next to the castle. Do real spider webs count as improvement too?

Come on guys, there are outstanding pastry chefs in your kitchen and you lamely store your gingerbread castle in a basement to bring it out in the limelight once a year?!

I’m not asking for a fabulous castle each year and I’m all for recycling, but a different gingerbread creation would be nice. Just ask 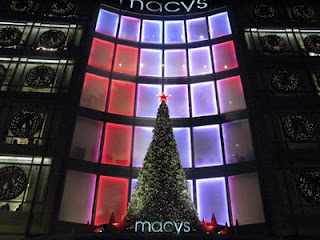 the savvy pastry apprentices at the nearby California Culinary Academy. They’ll be more than happy to show off their newly-learned skills.

So we left the St Francis with our girls and out we were on Union Square with thousands of other people.

Three years ago, I remember distinctly a band playing, a speech from Mayor Gavin Newsom and a loud countdown to the lighting.

This year, we were almost caught by surprise as the countdown started weakly before the planned time and we caught up by number 7. Not nearly as fun as the one I remembered. The tree championed by Macy’s was lit and people cheered.

As crowds poured out on neighboring Post and Geary streets, we decided to show our girls the Macy’s SPCA dog and cat windows.

We had a crazy time going around the block and with people cutting through dense lines, it was pretty tough to see anything at all. 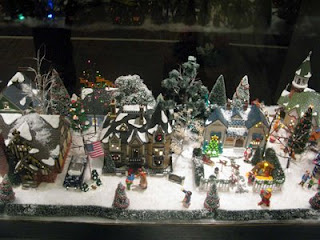 However we managed to see a few pupies and kittens, ready for adoption in their temporarily posh surroundings.

Before calling it a day, we pushed the doors of the Hyatt hotel behind the Levi’s store to see their snow village.

This is another tradition of ours. I always take my girls to see the snow village installed at the Hyatt Regency at the Embarcadero Center. This year, we decided we’d see the one at Union Square instead.

It is not nearly as nice (the Hyatt Regency displays more than 3,000 ceramic painted houses out of Len Connacher’s private collection) but our girls were still awestruck in front of the miniature snowy scenes replete with gingerbread houses, gliding skaters, circling carousels and blinking street lights. A delight to their eyes.

Off starts the season.