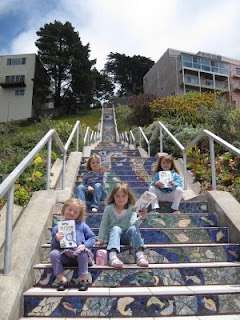 > Urbia: A Nature Hike with an Urban Flair

Urbia: A Nature Hike with an Urban Flair 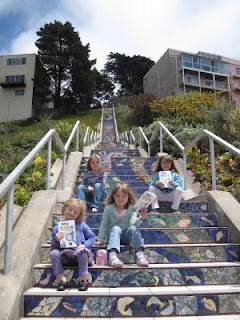 uced me by email to Damien Raffa. Together with Barbara Corff, Damien co-founded Urbia Adventure League, an outdoor treasure hunt that rolled out last weekend.

On Saturday June 13, at the foot of the 16th avenue & Moraga mosaic stairs, Damien and his Urbia partners handed out more than 50 adventure packets entitled Islands in the Sky to San Francisco families. “At our adventure starting station,” he says, “families warmed up their senses by smelling yerba buena (and tasting some homemade yerba buena tea), the tiny native mint that San Francisco was originally named after.”

In a nutshell, Urbia is a way to discover San Francisco through a nature lens – and most likely neighborhoods you knew nothing about before. Urbia is based on the concept of questing – also called letterboxing in England – a variation on outdoors treasure hunts. Thirteen years ago, Damien took a workshop on this form of community involvement, particularly popular in New England. 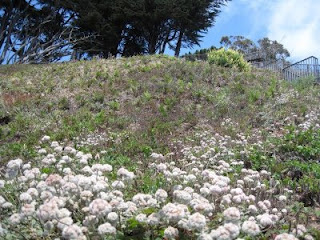 by mail instructions for an outdoors activity including solving riddles, orienting yourself and finding clues. At the end of the itinerary, there might have been a box with a stamp that people used to stamp their booklet.

Says Damien, if you want to connect San Franciscans with nature, you have to make it a fun game. Currently naturalist at the Presidio Trust, Damien knows a thing or two about nature. Urbia was born.

I particularly like the idea of receiving an enveloppe with 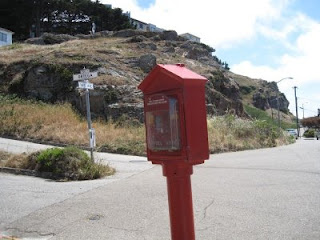 a mystery to solve in the mail, as my mailbox now only shelters invoices, publications and unwanted ads. It’s the tragedy of the digital age, says Damien.

Intrigued by the idea, I asked him if I could “test run” the hike with four little girls from 4 to 6 years of age last Thursday. Obliging, he met me at the bottom of the stairs with a booklet for each little girl and short Urbia pencils with erasers. Off to a great start.

We opened the booklets and began by taking some notes for the exploration: date, starting time, weather, visibility (a must in San Francisco…), air temperature, team members and team name. On our route, we se 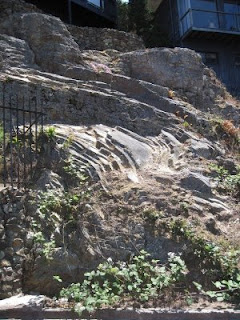 arched for sea stars made out of tiles, a red lfire alarm box, San Francisco’s highest dune and rocky outcrops looking like layers of cake.

The girls’ attention was piqued when we stopped to identify coast buckwheat, beach strawberry (not in bloom so trickier to tell) and yellow tree lupines – three plants that attract pollinators such as butterflies and bees.

This planted dune is part of the Green Hairstreak Corridor, a project to bring back a butterfly called the green hairstreak the size of a nickel. Expert at camouflaging itself amongst green plants, the green hairstreak has lost most of its habitat to land development. Hence the idea of re-planting San Francisco’s hillsides with the appropriate vegetation.

On the green hairstreak note, we have a fun anecdote. In the booklet you’re supposed to ask people you encounter if they’ve ever seen a green butterfly in their neighborhood. All four people we asked had been living in that neighborhood for a long time. None had ever seen that sneaky butterfly! Oh dear.

On with the hike. At the bottom of the booklet’s page 8 are four words that made the entire hike worth the effort for the children: “Find 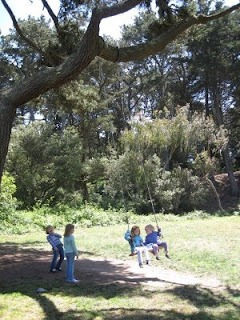 the tree swing.” What a swing! Part of Golden Gate Heights Park, the swing hangs from a tall cedar (?) tree and can comfortably accomodate two or three young children. Because of the heighth from which it is suspended, the pendulum effect is quite impressive and the experience exhilarating. Now, try to tear away four little girls from that tree swing… It takes a lot of persuasion.

The last part of the hike took us on a view of San Francisco I never dreamed existed. Since my camera does not shoot panoramic pictures, this is only one slice of it with the long green stretch of the Golden Gate Park and the Golden Gate Bridge and Mar 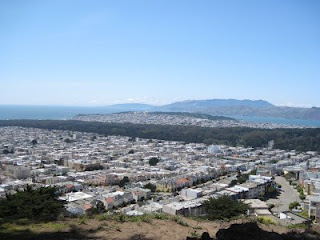 in in the distance. To my right was the Bay Bridge hiding behind Treasure Island. If not for a powerful wind, I would have stayed there longer. Alas, all good things have an end.

We closed the loop and got back in the car, already excited about Urbia’s next adventure. As a Russian Hill mother said last Saturday to Damien, “we often try to have an outdoor experience with guidebooks and they are too adult-oriented. This is perfect for our kids.” True – and older children will appreciate the full flavor of snipets of local geology and environmental education.

Another Urbia event will be planned in the same neighborhood on June 27, 2009 from 10am to noon. Look for it here.

4 thoughts on “Urbia: A Nature Hike with an Urban Flair”