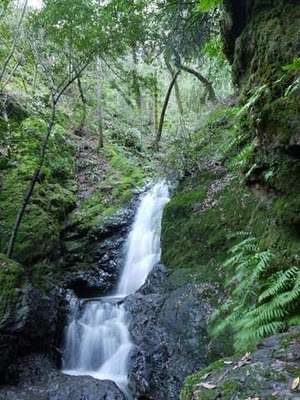 Uvas Canyon County Park is such an easy and rewarding hike that it’s shocking the trails aren’t more crowded. Here are five waterfalls peppered along 3.5 miles of well-maintained moderate trails, and you barely bump into two dozen hikers – dogs included – in a couple hours? What’s wrong with Uvas Canyon? Oh, I know. It’s in Morgan Hill, 45 minutes southwest of San Jose at the end of a windy road. Had Uvas Canyon been anchored along the sides of Mt Tamalpais, Cataract Falls and Carson Falls would have taken the back seat no contest. Its remote location actually saves Uvas Canyon from becoming a hiking freeway and it’s all for the best. Now let’s pray for some more rain because it’s one of the nicest quintets of waterfalls in the Bay Area.

﻿Getting there
Getting to Uvas Canyon is a trek but the scenic road and the last mile make it worth your fuel. From 101, you exit at Bailey Avenue, go west for 3.2 miles, turn left at McKean Road, go 2.4 miles, continue on Uvas Road for 3.7 miles, and turn right at Croy Road. That’s the short story. Now go 3.4 miles to the park and slow down. The last mile of the road to the park winds through Sveadal, a resort of the Swedish American Patriotic League. Kids play around here, which explains the 10mph speed limit.As you drive by slowly slowly, note the Swedish themed bungalows and cabins names in -son (Gustafson, Ericksson…). It’s official, you’re in Sweden! If you visit for the Midsummer festival (June 18 in 2011), hike around the resort to find a troll redwood carving by Swedish sculptor Emil Janel. After Sveadal, you’re at the gate of Uvas Canyon County Park. Pay your fees and make yourself at home: boots, water bottle, snacks, ready-set-go.

From the parking lot we decided to start with the waterfall loop. The waterfall loop is a one-miler that follows Swanson Creek upstream and passes three waterfalls. Surprisingly – given how hot this area gets during the summer – Swanson Creek is a year-round stream that trickles down the rock in small pools after the winter rains.

The first waterfall soon appeared on our right. It was right off the trail at the level of a footbridge. All we had to do was get our camera ready. The map didn’t show it but it is the lower tier of Black Rock Falls, the largest of the five waterfalls which totals 55 feet in heighth on three different tiers. We kept going. The kids (3 between 5 and 7 years) were totally hyper playing choo-choo train and they needed to burn off some steam on the trail. We let them run.
﻿

At 0.35 mile, we took a sharp right turn from Waterfall Loop Trail to Black Rock Falls. At the junction, all of us adults were startled by an unusual smell. We’re not exactly more winos than the next hiker but it smelled like spilled wine right there. More precisely, it smelled like fermenting grape, the kind of pungent smell that floats around wineries after the harvest. Was it a mushroom? A weird fern? Not a careless wino, of course not. We looked around but weren’t able to figure it out so walked on to catch up with the kids (who were way out of sight). They couldn’t be very far, the fall was 0.1 mile away.
The upper section of Black Rock Falls was tucked at the back of a narrow gully but quite impressive. According to Waterfallswest, it drops a spectacular 35 feet. Since we were hiking with as friend of mine who’s a yoga teacher, the kids waited for us in om position. It wasn’t long before they started goofing up again, running on the trail.﻿

﻿Back on the main trail, we hiked up another 0.1 mile to find Upper Falls and took a short spur to go see my favourite of them all, Basin Falls. It may not get high ratings from waterfall experts but for a mom, it gets five golden stars.

At the base of the fall the creek is quite narrow and interrupted by rock piles. From the path, kids can easily reach the water and play with the mud. It’s very hands-on, easy to wash off in the stream, and our girls had fun digging small pools and launching fallen leaves as vessels on the creek.
For adventurous spirits, you can make your way on the big rounded boulder where the falls create a basin, and look for a tucked rock “cave” on the left. Be careful, the rock is mossy and slippery, but the little cave barely gets sprayed by the fall and provides a quiet hiding spot for little kids. Ours rapidly got squirmy so we made it back to Upper Falls.

﻿﻿Upper Falls is the last waterfall on the waterfall loop at Uvas Canyon and falls in two opposing portions over 25 feet. Wider than the other falls, it is also surrounded by more open terrain and easier to approach from the trail.

Don’t do like the hikers we saw who were walking their dog at the base of the fall, pretending the sign asking hikers to stay back behind a fence didn’t exist. If it’s there, it’s for a reason. Erosion anyone? Sheesh.
If kids want to splash around, it’s possible to access the creek below the sign and hopscotch your way across the creek to little rock islands or fall logs. I’m not guaranteeing shoes won’t get wet – ours did – but it’s fun for a little break. At that point, we were about to turn around when half of us felt we could go farther. Coming back on Waterfall Loop Trail seemed unsatisfying, half baked. We decided at that point that we would do the grand tour to Triple Falls, the last waterfall of Uvas Canyon, way in a parallel canyon along a tributary to Alec Creek.
﻿﻿﻿

﻿To get there, we continued on the trail until it turned into Contour Trail, the aptly-named single file path that follows the contour of the canyon. Not recommended for people who suffer from any fear of heights. Steep drops ahead. Though that trail is 1.25 miles long, it felt a lot shorter because the kids used the elevation drops and sudden gains to run down and up and down and up. In fact we had to run after them twice because we couldn’t see them anymore. Given that the drops on the side were fairly impressive, none of the adults were completely comfortable letting the kids run loose.

The succession of California bay aurel and oak groves was very pretty and after 1.25 miles, the trail abruptly ended on Alec Canyon Trail. Everybody turn right! Some of us wanted to turn left and come back to the parking lot but I was set on seeing Triple Falls. We were only 0.7 mile away and Uvas Canyon is not exactly next door. So we turned right.

﻿ As much as we had been hiking under dense tree cover so far, Alex Canyon Trail was a pleasant change of scenery, an open trail with scenic views on the redwood mountains. There were even two benches in front of the valleys to quietly reap the visual rewards of the stroll. Day was falling when we got to the benches so we simply walked on.

For a while I hoped that the trail was going to keep climbing so the return would all be downhill, but treacherously the last 0.4 miles are downhill. Ugh. The troops weren’t happy. Triple Falls was a stone’s throw away but the kids were getting tired.

Two of us ran ahead to snap a shot of the falls (and check that they were where the map said they were) and we all retraced our steps, now headed to the parking lot and warm comfort of the car.

I’ll be blunt. Triple Falls was not worth it. After the gushing waterfalls we had seen on the initial portion of the hike, it’s a trickle. It might be better to discover the waterfalls in the reverse order to go “oooh aah” in front of Triple Falls and be increasingly impressed at each new fall.
Otherwise don’t bother and turn left at the junction of Contour Trail and Alec Canyon Trail. You’ve already done a lot, the kids will be happy. When we got to the parking lot, the ranger’s house was all illuminated with remnants of holiday lights. It was kind of unexpected in January and a nice surprise for the kids. I don’t think it’s a year-round feature though. Focus on the waterfalls and you’ll leave happy.

4 thoughts on “Uvas Canyon: Five Waterfalls and a Laurel Canyon”