Veganuary Day 11: 30 Days of Vegan to Save the Planet

After a night of gales that batter all of England including our little corner of London, I wake up to go to the pool but wishful thinking only gets you so far. About two houses away on my bike, I realize that my towel is missing, so come back home. I leave again and around the corner, get defeated by gale-force winds (literally can’t move forward on my bicycle at two spots). Disheartened, I give up very easily (it’s cold outside) and come back home with a deep feeling of unaccomplishment. Right. I need a pick-me-up. Breakfast? 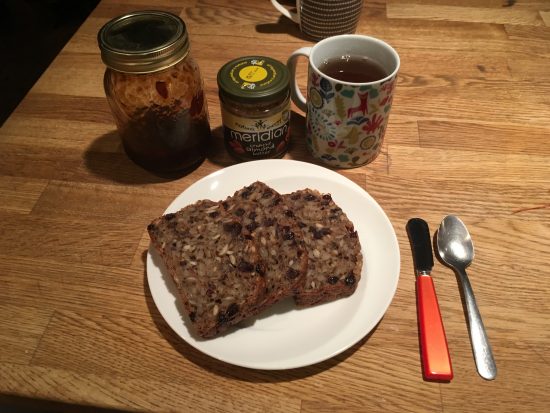 Surprise! It’s Danish spelt sourdough bread with almond butter and wild plum jam. You’d think that by the 4th time this week, I’d like some change. Truth be told, I’m a creature of habits. I like this bread. I like this jam. And though almond butter doesn’t do it like butter, it’s quite tasty. Onto the exciting item on today’s agenda: Pooh sticks.

Have you ever played Pooh sticks?

Today, January 18, is Winnie the Pooh Day celebrated on the birthday of A A Milne, author of the book. In his children’s classic The House at Pooh Corner, Winnie the Pooh drops a pinecone into a river from a bridge and watches it float away. When two people drop a pinecone or stick at the same time, which pinecone or stick appears first on the other side of the bridge? This is how Pooh sticks is played. You don’t need much but you do need: a stick or pinecone, a bridge, a river flowing under the bridge. If you’re a fan, you can join the World Pooh Stick championships.

At the office, I am supposed to go training with my colleague Lucinda before lunch time for our Tough Mudder Half but Lucinda suggests that we incorporate Pooh sticks into our training. It is a fitting winter way to work up an appetite. To gather our supplies, we walk briskly to the local park to pick up sticks. 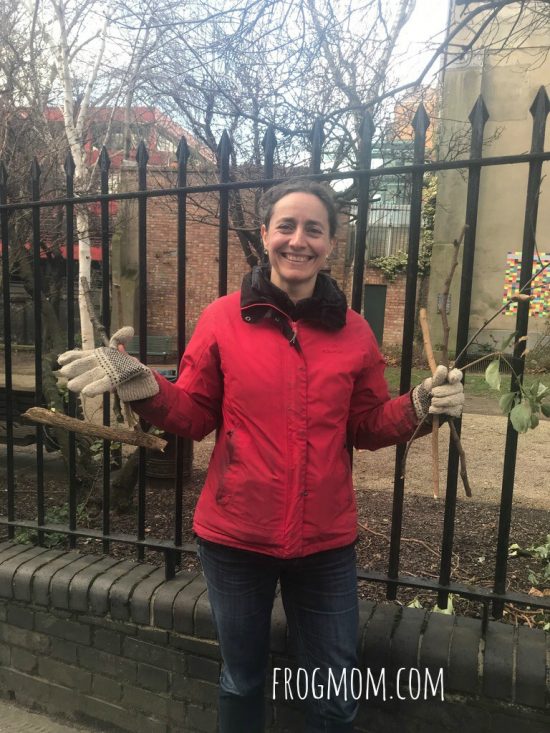 With our loot, we half-walk half-jog to Blackfriars Bridge, 1 mile away. Once at the bridge, we come to the conclusion that we would need to be creative on the part where you drop the stick into the river and run to the other side to wait for it. This Victorian bridge is 32m/105 feet wide and features 4 car lanes and 2 bicycle lanes. Running across it did not guarantee our safe return. I drop the stick on one side while Lucinda stands watch on the other side and keeps an eye out for it.

Because of the strong tide and churn in the river, none of the sticks makes any re-appearances but we still celebrate Winnie the Pooh Day in spirit–and then walk down to the Thames Path to do our training. After I tweet our nod to A A Milne, a follower quotes my tweet, saying we did hardcore urban Pooh sticks.  I say, that is flattering. Hardcore is not really part of my vocabulary, but I’ll take the compliment. After the training is done and dusted, after many painful crunches and pushups, I am ready for a good lunch.

With all the leftovers still in the fridge at home, I could easily have brought a hearty lunch to reheat. For some mysterious reason I cannot fathom, I bring a healthy picnic lunch. 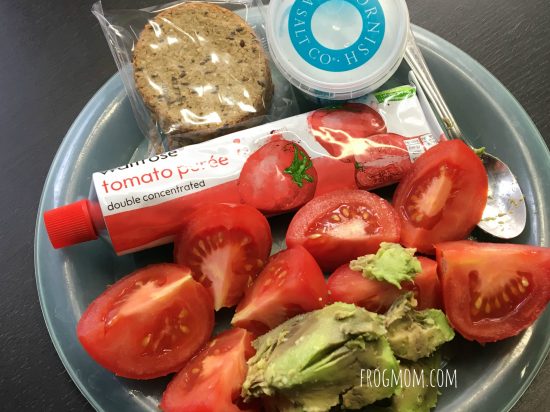 I don’t understand how this happened but there you are: avocado, tomatoes, seeded oat cakes and tomato purée, with Cornish sea salt to season. You’d think it was the height of summer in Italy, not a chilly winter day in London. Eh, you can’t always get it right. What you don’t see on this picture is that I eat a second avocado and a second portion of oat cakes which, quite frankly, leave my stomach very full.

Not so full that I couldn’t end on a sweet note. 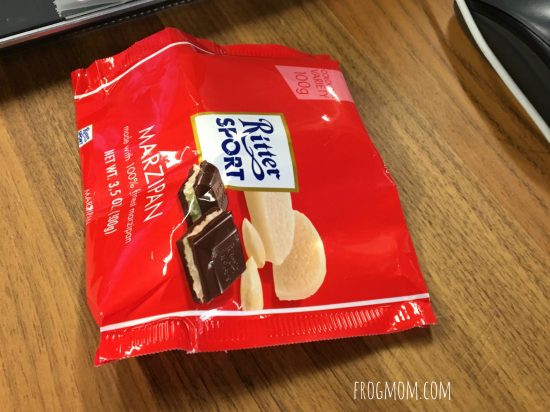 In the world of Veganuary, life is not always fair but at least, Ritter Sport Dark Chocolate & Marzipan bars are vegan. You don’t realize how much of a game changer this is. That’s normal food that I can find at my local grocery store, neither overpriced nor in the weird section. It’s just with the other chocolate bars and accidentally vegan. Isn’t life wonderful?

Since I am on a tomato roll, I decide to keep up the theme in the evening. Once the bicycle is locked, I get to chopping tomatoes in the kitchen. 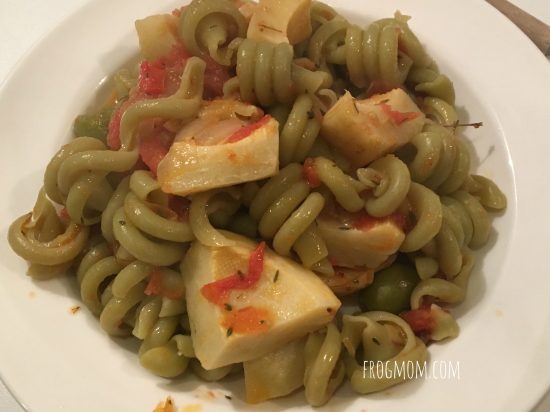 Inspired by the Quick & Easy section on Veganuary.com, I make spinach pasta with artichokes, olives and tomatoes. I do love artichokes and I love even more than our local Lebanese grocery store carries them in the frozen section. Thanks to them, I am only 10 minutes away from warm artichoke hearts on my plate. This last use of red food concluded today’s theme, a day dedicated to the best bear in the world and in Ashdown Forest.

Note: if I had been truthful to Winnie the Pooh, I would have eaten honey with my paws today but as you may have heard, honey is not vegan. It’s a tad controversial as extracting honey can hurt bees in many ways when done on a large scale. When done on a small scale by responsible beekeepers, there’s a feeble vegan argument that honey is OK but I wont stick my neck out until Veganuary is over. I’m a big honey-lover but I pledged and I play by the rules of Veganuary.

Regardless. I hope that you’ll be inspired to play Pooh sticks with your kids and friends too.

Tomorrow is Day 12 and we are invited at Liz’s for dinner. Oh, what will she come up with?