Veganuary Day 15: 30 Days of Vegan to Save the Planet

It’s Day 15 of Veganuary. Officially, tomorrow, I’ll be in the second half of the 30-day pledge to eat vegan to save the planet. For a Monday, this one is remarkably devoid of leftovers. Perhaps it has to do with a weekend away? However, mid-Veganuary is also a good time for me to explain the origins of Veganuary and who’s behind it.

I’ll start with breakfast as this one was easy. I now have a vegan breakfast routine and as much as I enjoyed Pret a Manger’s acai berry bowl on the train, I much prefer home-made breakfasts. 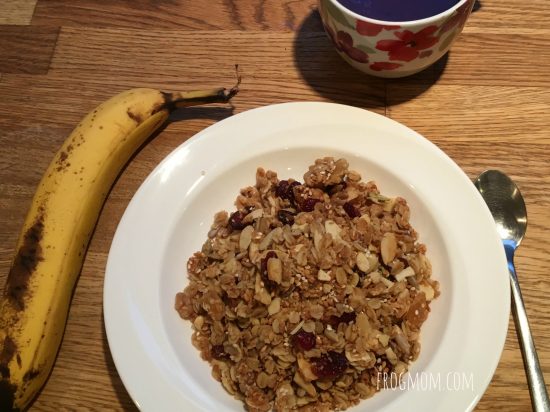 It’s homemade granola with a banana, the breakfast of champions, and as yummy as Day 1.

Is it a health movement? A soy lobby festival? Dry January’s cousin twice removed? Does it come from the US?

Veganuary is a British nonprofit that began in 2014 with the mission of converting participants to lifelong veganism. Their belief is that a vegan diet can help preserve the environment and reduce impact on animals. So in fact, it’s called Veganuary but it should be called Vegan Forever, except it doesn’t sound that hot. The non-profit (it’s a charity) was co-founded by husband and wife team Matthew Glover and Jane Land. Fortunately for Veganuary, Matthew works in event planning, Jane is a former English teacher, and both have a strong entrepreneurial mindset.

Departing from the non-profit mission, the Veganuary website is decidedly a commercial platform (it’s a .com, not a .org) that’s part lifestyle magazine, part online store and it’s all about plants. It’s a very well designed website with a UK, a UK and an Australian version, with Spanish coming up and I’m sure that other languages will come shortly. The website’s audience, based on Alexa.com, is mostly female and as far as geography, is roughly divided into 37% UK, 28% US, 5.5% Australia, 4.2% Canada and 3.5% India.

In addition to the website, Matthew and Jane have co-authored a book, How to Go Vegan: The why, the how, and everything you need to make going vegan easy (you get it here: UK | US) and are organizing a plant-based food festival called Thrive in 2018. In 2018, Veganuary claims that 120,000 people were signed for the pledge (it’s like a newsletter sign-up) and the Facebook group counts over 178,000 followers globally (it’s growing every day).

Pardon the terrible pun, but it’s a well-oiled marketing machine with a social purpose. With a team of only 4 people, Veganuary is doing great and you can tell it’s actually changing society, at least in the UK, when you see the number of vegan food choices that appear on the shelves of supermarkets in January. It’s actually fascinating to observe, as some British chains add new vegan products every week. Crazy, eh?

Ah, well. We haven’t seen the last of Veganuary but until further reporting resumes, I need to get lunch.

Note: presence on Twitter: 33K, on Instagam: 61K, quasi non-existent on LinkedIn (fair enough), but why no presence on Pinterest? Seems like a missed opportunity, marketing-wise.

I’m still debating what to do with Day 12’s vegan cheese when I have a lightbulb moment. Grilled cheese sandwich! Wait, will coconut-based fake cheddar cheese melt with heat? Oh, I sense intense heart trepidations at the thought. What if it doesn’t melt and stays as a block between two slices of bread? That should be interesting. Following vague internet instructions, I slather coconut oil on the outside of two slices of bread, squeeze slabs of fake cheese in the middle, and pop the sandwiches on the stovetop. 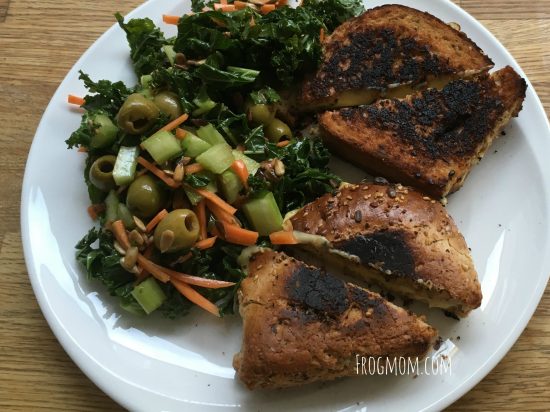 The result is surprisingly not bad. First things first, the fake cheese has melted. Hurray! It’s oozing from the sandwich. Tastewise, it’s on par with the cold version (meaning, rather bland) and certainly nowhere near as good as real cheddar, but it’s a start. Second, I may have forgotten it on the stovetop when I was chopping kale so it’s slightly on the charred side. Not to worry. The kale salad probably makes up for what I’m missing for my 5-a-day. 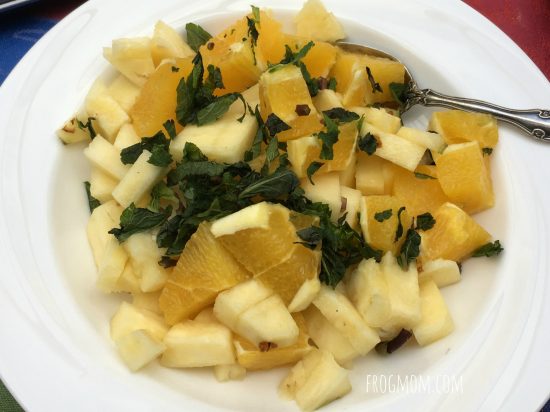 After two seconds of junk food agony — should I or should I not chocolate right now? — I talk myself into making a fresh fruit salad with pineapple, orange and fresh mint. It’s delicious and super healthy, but guess what. I’m still having dark chocolate with marzipan!

Feeling ambitious, I make a Brussels sprouts soba bowl from Naturally Ella and the best vegan apple crisp from the Minimalist Baker. If she says it’s the best, it must be true. 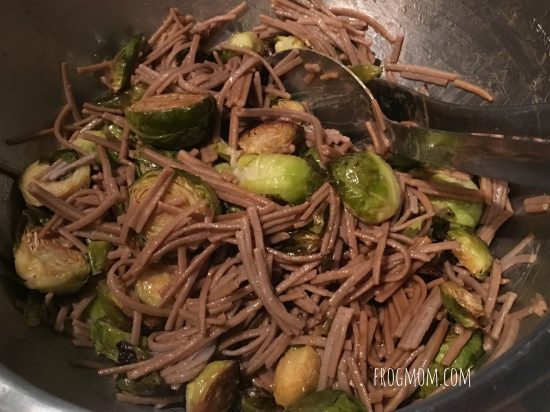 Soba comes with a curse, as far as I’m concerned. I never rinse it enough and it ends up in giant clumps. This time, I manage to end up with only small clumps (I’m mastering the art of soba) but neither of my girls seems to care. They both have seconds and say that they love it.

Why, I may be purring with satisfaction. 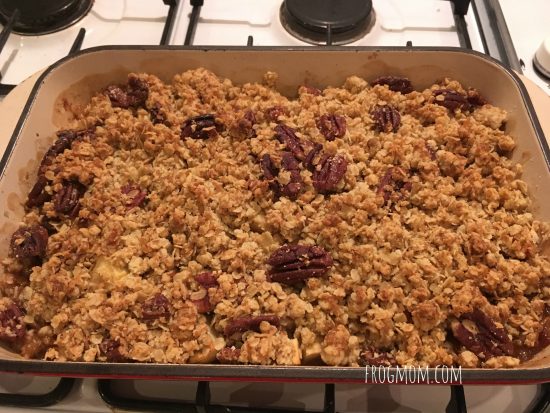 My girls’ verdict: We prefer the real kind. What did you use in it?

My girls: Right. We can tell.

So, it tastes like a Greek salad? I wouldn’t go that far but olive oil is definitely there. Maybe I should try with a more neutral vegetable oil next time. The texture is nice, if a bit too soft (I’m not getting the crunchiness of a butter crumble) and the apples are not too sweet. Overall, today’s a total vegan score.