Veganuary Day 18: 30 Days of Vegan to Save the Planet

This is Day 18 of Veganuary, a 30-day pledge to eat vegan to save the planet. On this wondrous day, I get initiated to the earliest Burns Night in Britain, the crack-of-dawn Haggis Swim at the Serpentine Swimming Club, followed by veggie haggis breakfast and a wee dram. Would Robert Burns approve?

Traditionally, Burns Night, on January 25th, consists of a Scottish dinner to celebrate the life and poetry of 18th century Scottish poet, Robert Burns. It is very structured in its ritual: a piper greets the guests who gather and mix, the host says a few words welcoming everyone to the supper, everybody stands for the entry of the Haggis, the host recites Address to a Haggis (a poem by Robert Burns) and drunken chaos ensues (more or less).

So far, so good. I had never done it before but now I realize I’ve been missing out big time.

Today, Alasdair and Geordie, father-and-son members of the Serpentine Swimming Club, gather us for a Burns Night celebration at the crack of dawn. What a treat, my friends, what a treat. Imagine a damp winter morning in London. The sun refuses to come out. Outside the changing room, Alasdair, maître de cérémonie, shares instructions with his son Geordie and friends. Inside, the changing room is packed with eager swimmers in various states of Scottish (un)dress. Claire, wearing a Nessie hat, lends me a Scottish flag swimming costume (probably because I’m not wearing one) that I add on top of my Serpentine costume. Alan proudly wears his clan kilt. Mary wears her own tartan too. “It had been in the cupboard 15 years!” she giggles. 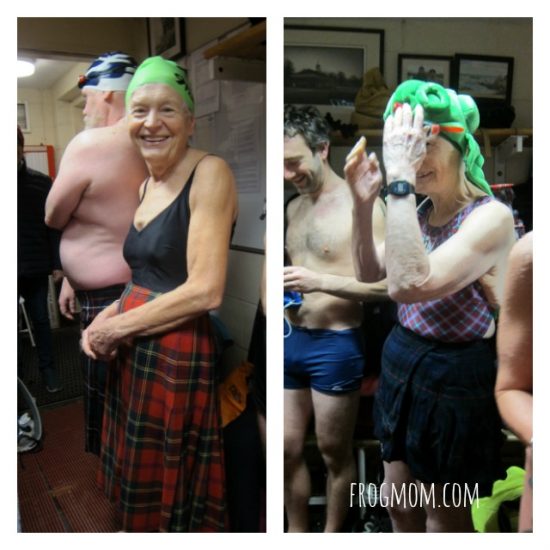 At 7.15am sharp, Alasdair comes in to explain how we are going to march outside following the bagpipe, then dance on the board before going for a 100m swim. Everybody is more than ready when the sound of the bagpipe rises and we all follow Geordie, playing the bagpipe in his swimming trunks, like the children of Hamelin behind the pied piper. 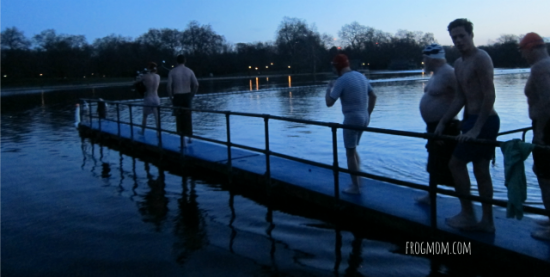 An impromptu dance and a swim later, Alasdair greets us from the water (temperature 4C/40F today) with “a wee dram” (many wee drams, in fact, there goes Dry January). Below, this is me with two Serpentine friends–Sarah on the right. Can you see I’m the only one not holding a wee dram? 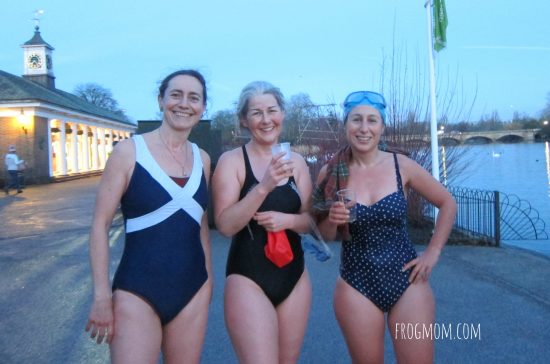 That’s because I’ve already drunk it, silly. A bit more piping and poetry reciting later (yes, Alasdair recited the Address to a Haggis in Scot, while club president Robin did the English version), the haggis arrives in front of the crowd. Is it vegan? Alasdair said it would be vegetarian. You can’t ask for the impossible, Veganuary, but I’ll check. 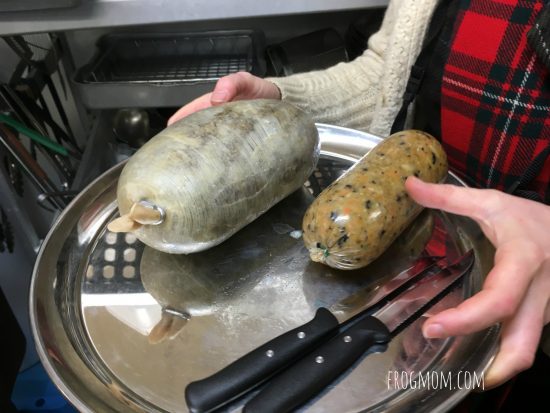 The vegetarian haggis is the one on the right, with Fiona’s thumb holding it steady. As you may have heard, hunting wild haggis is no easy feat as these wee beasties have short legs and master the art of Highlands camouflage. They are virtually invisible in their native habitat. Of course, Fiona, being a true Scot, has perfected her technique over the years and you can see how easily she tames not one, but two wild haggises on one slippery platter. Bravo, Fiona. 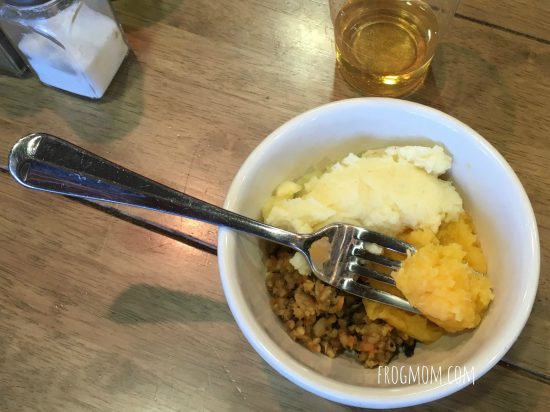 This is the vegetarian wild haggis, completely tamed, with “neeps and tatties,” Scottish speak for cooked swedes or turnips and potato mash. What a funny lot the Scots are. Top of the picture, you can spot the stealthy “wee dram,” star of this morning’s Scottish breakfast for the champions.

Now, the real question: is vegetarian haggis vegan and is it good?

Yes to both! Alasdair treats us to McSween vegetarian haggis, described on their website as a mix of healthy fresh vegetables, pulses, oatmeal, seeds and spices. Convenient to cook with for a variety of recipes. Honestly, what’s not to like?

So there. Dry January may have gone down the dram today, but Veganuary is safe. 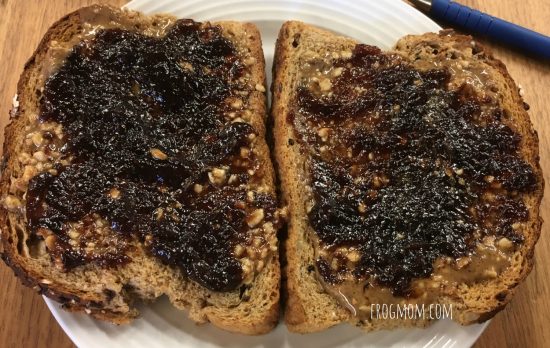 On Day  5, Day 13 and Day 16. It’s hazelnut butter on granary bread with mystery jam. I’m saying mystery jam because I’m a frantic jam maker but I don’t always label my jars. Today’s jar, by the looks of it, must a pre-2012 vintage and if I had to venture a guess, I’d say it’s an old but tasty plum jam but frankly, I’m not sure. Since I’m still not sick, I think it’s still vaguely edible. 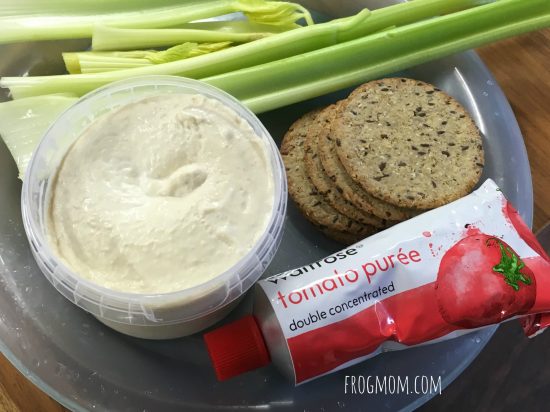 I’ll say, after haggis and toast for breakfast, I’m keeping a healthy profile at lunch time. Impersonating my best bunny, I dip celery in hummus and spread tomato puree on seeded oat cakes. To finish, I even eat an apple but I’m really not hungry anymore. I just want something fresh and my friend Sue always said that apples clean your teeth. Since I’m headed for the dentist today, the apple will do in lieu of toothbrush.

I wish I had vegetarian haggis on hand but my local Sainsbury doesn’t carry it and neither does WholeFoods. I haven’t ventured as far as the corner Waitrose but I bet you they only have regular haggis, sliced and wrapped in plastic. Since last night we discovered that veggie burgers can be good, we do it again tonight. 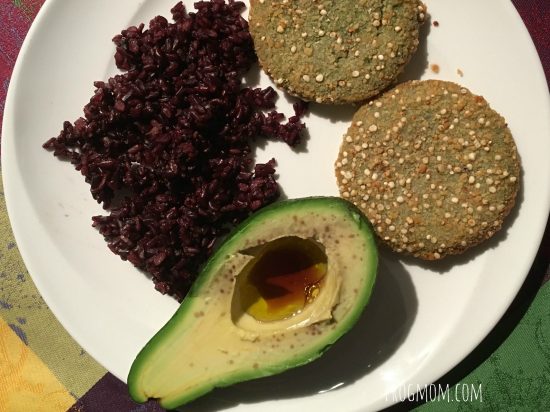 This is pumpkin and spinach burger with a quinoa crust, next to Thai red rice and an avocado. It makes for a rather tasty and quick dinner, something that’s quite convenient as I haven’t had the time to prepare anything elaborate. With my oldest daughter, we eat lichees for dessert while discussing Stranger Things and actors off vs on camera. When my youngest returns from synchronized swimming practice, she sits down in the sofa to watch all the videos of this morning’s earliest Burns Night in Britain. I’ll include them in a post when I have time to edit the lot.

I’ll leave you on a famous poem about my mother’s favorite animal, a wee mouse, by none else than Robert Burns.