Veganuary Day 25: 30 Days of Vegan to Save the Planet

This is Day 25 of Veganuary, a 30-day pledge to eat vegan to save the planet. Today is the day I redefine rabbit food and bring it to a higher state. It had to happen. It’s also a lovely day to talk about cycling to work in London.

After a good but short night (that’s what I get for writing these daily posts after my girls’ bedtime), I decide to skip swim training to get an extra 30 minutes of sleep. Naughty me. I’ll make up for it, I promise. 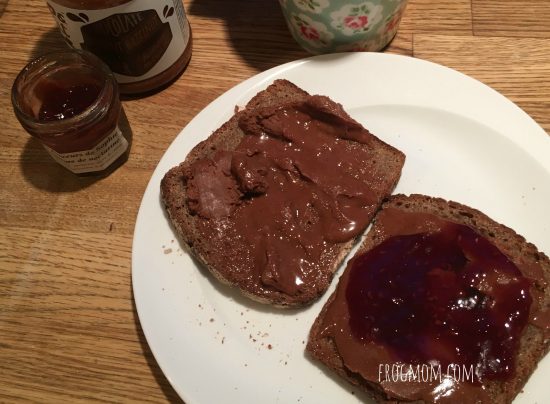 Capitalizing on yesterday’s discovery, I eat vegan fake Nutella on rye bread toast with raspberry jam. I should have taken it out of the fridge earlier, though. It’s a bit too stiff right out of the cold, and more difficult to spread than after being outside an hour. Nevertheless, it’s very good and filling.

Cycling to Work in London

In London, we cycle to work while in San Francisco, we bike to work. Funny the tiny language differences, but essentially, we’re talking about the same two-wheel affair. Every time I go to the office (3 times a week), I cycle 10k/6.3miles each way on a mixture of city roads and cycling lanes. Most of it is in and next to car traffic, but when I’m lucky and I cycle through Hyde Park, I enjoy a brief green interlude, the occasional Queen’s Life Guard sightings and the many Albert public places or buildings. 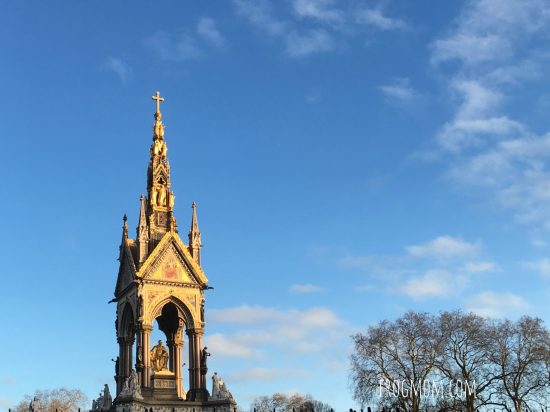 This is the Albert Memorial, named after Prince Albert, the proud protagonist of the greatest love story of London’s history, Queen Victoria and Prince Albert. Together they had nine children and when he died at age 42, making Victoria a young widow, she was distraught. He was celebrated post-mortem with many public buildings and London is a very prominent Albert hotspot. The Albert Memorial sits across from the Royal Albert Hall, a stone’s throw from Queen’s Gate and Prince Consort road, a few blocks away from the Victoria & Albert Museum, about 2 miles from the pub The Albert on Victoria Street but if you continue another mile, you’ll reach the Albert Embankment. Clearly, she loved him.

Cycling to work in London. 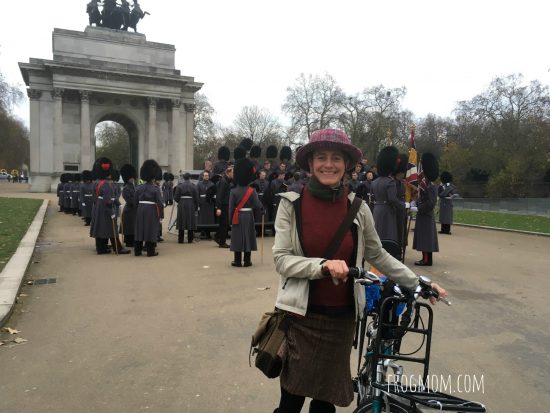 In 2015, Transport for London estimated the total number of cycling journeys as 610,000 a day – 23 million a year. In 2016, 4% of all British people cycled every day. Cyclists are roughly 75% men, 25% women and that shows every time I hit the roads. The number of guys in lycra heading to work in the City is staggering. They are also all geared up for the Tour de France. I’m easily the most under-equipped cyclist  at all times with my 2009 Schwinn Suburban but at least, it’s sturdy enough that I can give a ride to my 12-year-old to school when she is late. She weighs 33kg, for what it’s worth, and I very much doubt that all the super speedy light frames of MAMILs can support such weight on the rear tire.

Other fun facts about cycling in London:

Last but not least: if ever you bring your visiting family to see Big Ben, be very careful about not walking on the cycle lanes. The number of tourists I’ve seen traumatised, hurt or yelled at by zooming cyclists on this section of the cycle superhighway!

Today is a new milestone in Veganuary. Today is the day I reinvent rabbit food on a level never boldly seen before. Before I do that, I am very grateful to our Brighton colleague Nadya for sharing her dried seaweed chips when I am famished. 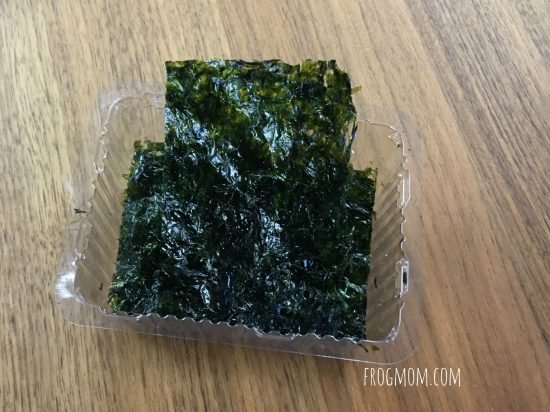 These things are so completely addictive. I really need to find a recipe for them, because foraging your own seaweed with kids is super easy and provides a great nutrient source for free.

Now the plat de résistance. In the morning, I prep cooked lentils, sundried tomatoes, fresh celery, parsley and an avocado for lunch. At work, I chop and assemble everything in a bowl at lunchtime. It looks delicious. 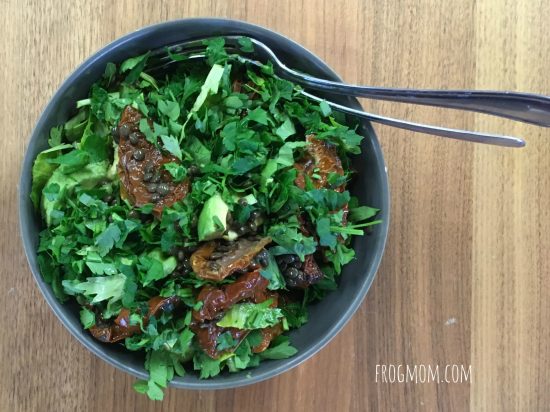 It’s not in the fridge. It’s not in my backpack. It’s not near the sink either. I know where it is — in my fridge at home.

Veganuary blues hits me hard. There’s no seasoning at all at the office, not even salt and pepper. Here comes rabbit food 2.0, the very textured salad without any dressing at all. Even if I tried, I couldn’t get excited. My seasoning was a lovely mix of lime, hazelnut oil and coarse sea salt!

OK, better get on with it. It’s never taken me so long to chew a vegetable salad and I sincerely pity rabbits who never get any seasoning in their own greens but are missing out big time. This will teach me to forget the dressing at home. ll afternoon, I fantasize on this salad dressing as the salad was rather bland.

Except I hop onto a Skype call until 8pm when I get home, so there goes dinner prep. The good news is, we’re not far from a Waitrose store. I ask my oldest daughter, who’s sick and hasn’t eaten since yesterday morning, what she would like to eat. Ravioli, she says. She’s maybe hungry for ravioli. There are no vegan raviolis at Waitrose. Or WholeFoods. Or Sainsburys. Or Marks and Spencer. Actually, the vegan selection at any of these stores, except WholeFoods, would make anybody cry in the refrigerated aisles. It’s sad, boring and uninspired.

Where’s the famed British eccentricity when you need it? Come on, sausages, make a little space for nice yummy vegan foods. Pretty please. Nobody will know. 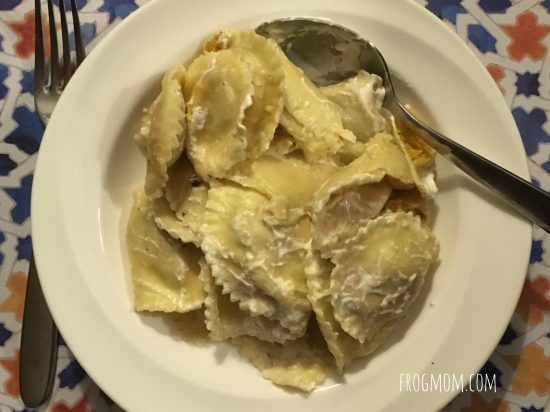 But no. Ravioli it is. Mushroom and butternut squash ravioli, two different varieties actually. I don’t care that it’s vegetarian and an epic vegan fail. My daughter cleans her plate and feels much better after dinner. I’m glad that she’s in better spirits. Having a sick child is no fun. And grocery stores should really up their selection in the vegan department.

Mind you, I’m happy for the convenience of the ravioli. It almost makes up for the rabbit food punishment salad.

Sometimes, you have to compromise and that’s OK.