Veganuary Day 26: 30 Days of Vegan to Save the Planet

This is Day 26 of Veganuary, a 30-day pledge to eat vegan to save the planet. Today is Groundhog Day and Punxsutawney Phil predicts six more weeks of winter. Let’s celebrate with vegan pancakes!

On Groundhog Day, the French eat crêpes. You can read all about it here. Instead of crêpes, which are traditionally a lunch or dinner item (not breakfast), I go for pancake. Truth be told, I’ve got two ripe bananas on my kitchen counter and Waitrose Magazine’s February issue includes a vegan pancake recipe. I tweak it to avoid any coconut products and make a short stack. 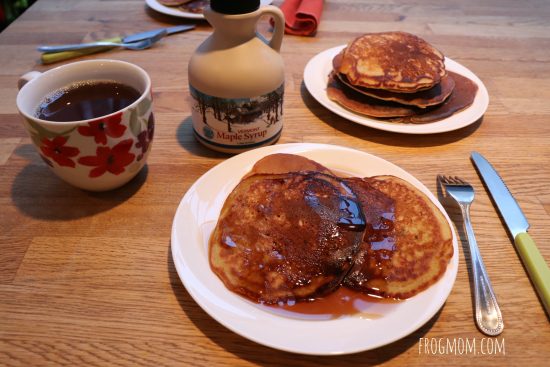 Hold on, this one’s slipping. There. I got you Babe. My, they’re delicious! I would be hard-pressed guessing that they don’t have any eggs. Butter, I would know, because they are not crispy around the edges, but eggs, it’s impossible. I made vegan pancakes with bananas at Thanksgiving and thought they were good but now, I have the improved version and I’m saving the recipe. With maple syrup, it’s a real treat. You should really try.

Walking through North End Market, I head straight to Fala Fills, the little red van on wheels at the corner of Racton Road. Day in day out, these guys make the best falafel wrap ever. I wait in line as the team of two divvy up the work. The guy at the back is shaping chickpea batter into balls and deep-frying them. Voila, falafel coming right up. The guy at the front takes the order, heats up the wrap, grabs 4 falafels per wrap and assembles it with the following: turnip pickles, lettuce pickles, fresh lettuce, chopped tomatoes with onions, hummus and tahini sauce. Roll it, wrap it, done. 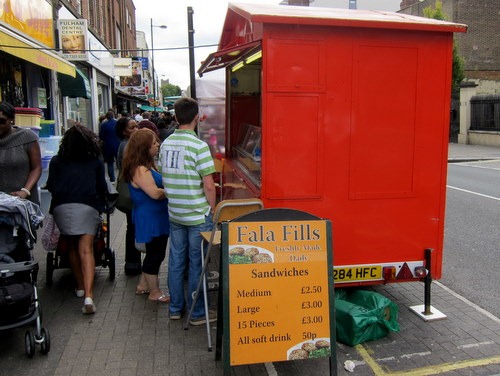 Do they even know they are selling vegan food? I mean. It’s all about marketing, right? If they only knew how trendy it is to eat vegan in big cities, they would have a funky chalkboard with today’s vegan menu written in metro-rustic letters and double their prices. They might even sell vegan chai macha latte on the side, who knows. Instead, they have a crappy plastic sign à la county fair with 6 lines of menu and I pay £4 for my lunch. Borough Market, you’re so over the top. Take a cue from North End Market for no-thrills vegan. 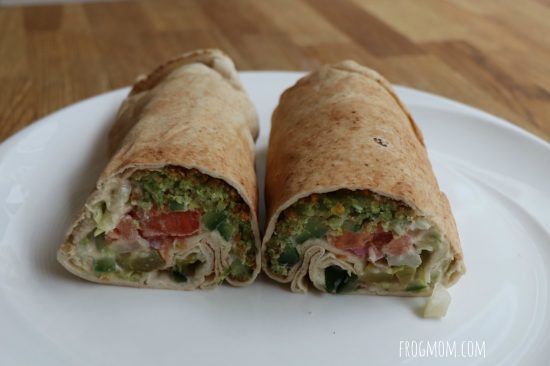 Once my wrap eaten, I crave something fresh and for dessert, I make a pink grapefruit, passion fruit, raisins and almond salad. It’s great. Just what I needed.

Dinner is another story. With my girls, we are on a train for the Peak District and we’ve bought takeaway food. I even venture into unknown territory, much to the horror of my 14-year-old who tells me, “No! Maman, you said you would never eat these sorts of vegan foods.” She’s very afraid and I can’t resist. After all, it’s called TTLA sandwich and it looks like it’s mimicking a BLT. Let’s give it a try. 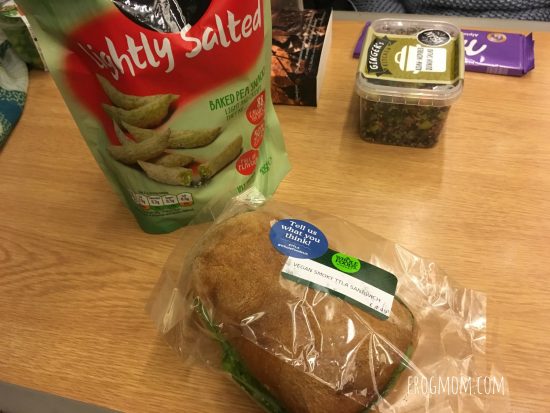 It’s WholeFoods so when it says vegan on the label, I trust that it’s vegan. Here’s the list of ingredients: smoky maple bacon tempeh, tomato, lettuce, avocado and roasted garlic vegenaise on ciabatta bread. Oh, and these snap pea-shaped baked pea chips? They are excellent. My 14-year-old is addicted.

Honestly, it doesn’t look half bad and it’s quite good too. I’ll even admit to enjoying the texture of tempeh. I don’t know what’s in it, probably modified soy, but it’s got a nice crunchiness close to walnuts. 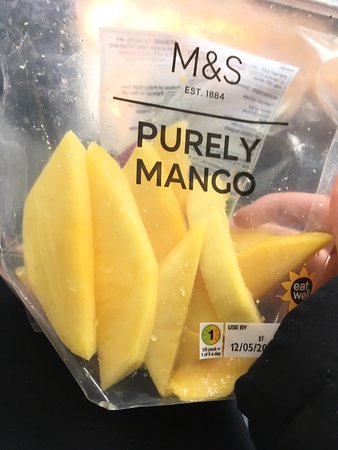 For dessert, I eat half a kilogram of mango slices. Love mangoes and Marks & Spencer’s, present in all London train stations, sells very convenient zippy bags of ‘Purely Mango.’ They are packed in South Africa so, maybe they’re South African mangoes? Wait, it says “Produce of more than one country.” Right. We’ll never know the country of origin and that’s a shame. If fresh vegetables and fruit need their country of origin displayed on labels in the produce aisles, why not packaged vegetables and fruit? That would be an improvement to decide whether or not we want to buy mangoes from a horrid dictatorship or from a country that shines for its environmental efforts. I know, I’m dreaming. Mango-producing countries are not exactly at the forefront of conservation but give them time. They’ll get there. It’s their livelihood, they need to protect that too.

Tomorrow is a first. We’ll be eating warm on the trail, as snow is on the weather forecast. I brought a camping stove in my backpack, sporks and tea bags. Quite excited for my first vegan trail lunch.