Veganuary Day 27: 30 Days of Vegan to Save the Planet

This is Day 27 of Veganuary, a 30-day pledge to eat vegan to save the planet. Today, I’m out in the sticks in the Peak District, I trial the Youth Hostels Association vegan breakfast, cook my first vegan trail lunch with a camping stove and test village pub menus on the vegan front.

Breakfast at the YHA

After many train trials and tribulations, we arrived at the Castleton Losehill Hall Hostel last night and they noted my request for a vegan breakfast upon arrival. In the morning, I don’t set my expectations too high as I have no idea what’s going to end up on my plate but I’m curious as well. The YHA operates some very high-standard hostels in the UK and this one is a newly refurbished Victorian Gothic mansion. Not we would notice in our bedroom that’s set in a new and utterly charmless extension, but the common rooms are quite nice. So there. There’s potential. 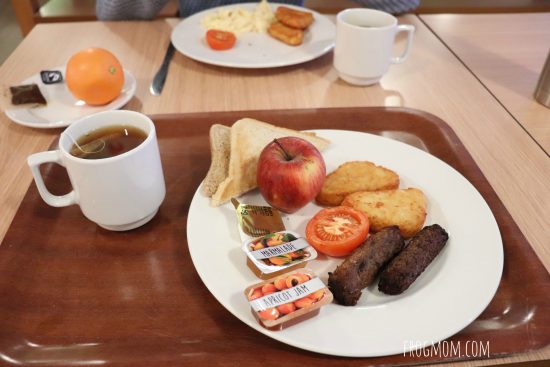 It’s a very pleasant surprise all around. The two guys serving breakfast see me looking at sausages and bacon with dismay and ask, “Are you a vegan breakfast?” Guess I’m not the only one. To my positive response, they immediately roll out the red carpet. They have Linda McCartney sausages (vegan), roasted tomatoes and hash browns. Though the sausages are on the dry side, the tomato is really good (I plan to ask two tomorrow morning) and the hash browns are some of the best I’ve had in a long time. They also offer toast, which I eat with margarine and fruit jam, as well as an apple. Royal, right? I’m honestly super happy that the YHA is getting this vegan gig so right. Porridge or nuts granola would be nice but not essential.

Today’s goal is a circular hike up Losehill, then a walk on the ridge to Mam Tor, down to Castleton via an old collapsed road and caverns. As it’s been snowing, I’ve got the full camping set up in my backpack: camping stove, folding bowls, sporks, pot and lunch. 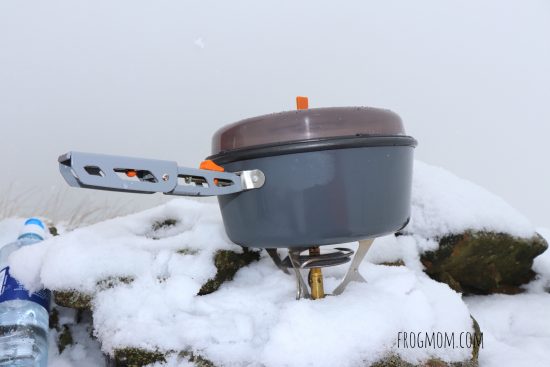 At noon, my 12-year-old is hungry so we stop by a dry stone wall and start cooking lunch. I set the stove in the snow and boil water. On the menu: diced carrots and celery, vegetable bouillon cube and elbow pasta supposed to cook in 3 minutes. That’s where it doesn’t exactly go according to plan. The water takes too long to boil. Without boiling, the pasta is never going to cook. I crank up the gas and get the heat reflector and windscreen. Finally! That’s what I should have done from the start. 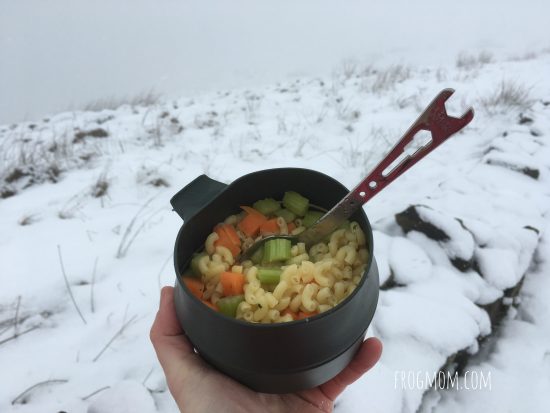 Twenty minutes later, we can dig into a bowl of hot pasta with veggies. It’s very welcome as we’ve cooled down somewhat, waiting for the meal to cook (duh, heat reflector), and my 12-year-old and I are very happy to eat something warm. A group walks by and looks with envy at our set-up. “That’s what we should have brought!” they say. I smile and say hi, glad that I don’t have to eat a sandwich or crisps and sugary bars like everyone else in the snow. Honestly, cooking a meal on the trail is not that difficult and it really makes a difference in refueling your energy levels. 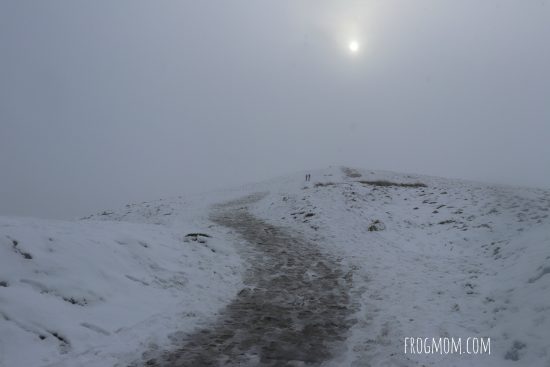 After lunch, we get back on the trail and enjoy a beautiful walk, albeit one without views as visibility is pretty limited around the ridge. I’ll look at images on Google to know what we’ve missed.

What would England be without tea time? As soon as we get back to the youth hostel, we remove our bulky boots, rain trousers and big jacket. I go down to the kitchen and make tea. Time to relax! 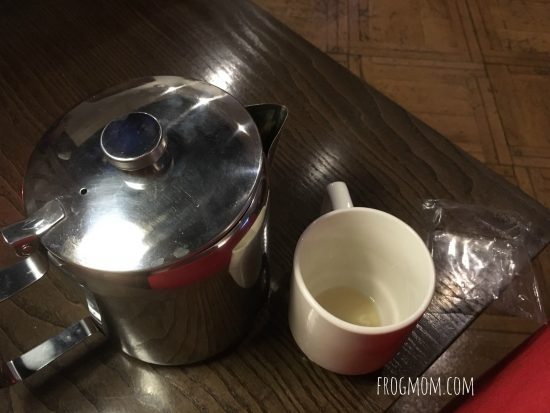 I find a nice comfy armchair in a room where two older men are watching the rugby Six Nations match on TV. France is playing Ireland and they can’t help making snide comments about France. Sipping my cup of tea and enjoying stem ginger oat biscuits, I listen with great interest to the two grandpas who remind me of the grumpy old guys on the Muppet Show. “Remember Waterloo!” they say to the TV screen as the French team walks in at the beginning. It’s hilarious. Tea and oat biscuits go down a treat as I type away on the computer, very amused by the grumpy grampas.

With my 12-year-old, we’ve read every single pub menu in town and it looks like Ye Olde Nags Head is our best bet for Veganuary. Set in a 17th-century former coaching inn, it’s a traditional village pub with fireplace and tick carpet. They don’t take reservations so we show up early and guess what, there are no tables.

The only other option is the Peak Hotel but honestly, it looks like a disaster in the making. The only vegan option is a starter, fried mushrooms with sauce. Hunting trophy, anyone? 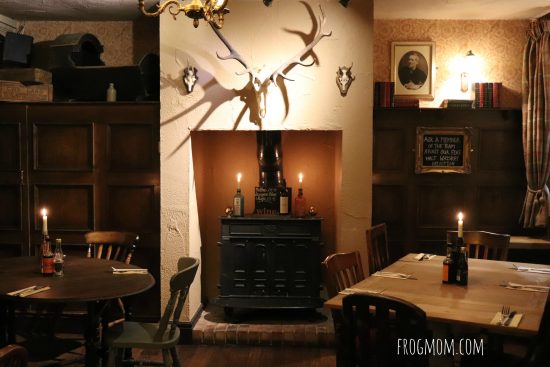 Except you shouldn’t trust the Peak Hotel by its cover. When I ask the waitress about the menu, she’s so helpful. Yes, they can make vegan tagliatelles with artichokes, olives and mushrooms. Yes, they can make a vegan garlic bread for me. Yes, the Bradfield Farmers Blonde local beer is nice. To all that, I say Amen. The best part? The vegan options are not even on the menu. This is all “off-trail” and very good news.

Note to restaurant owner: mention it on the menu? 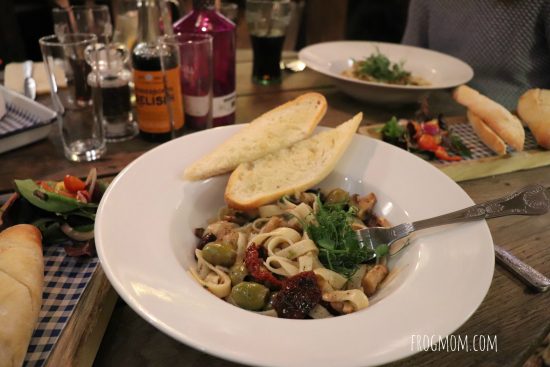 Turns out there are no artichokes in the kitchen. Ah well. Sundried tomatoes? Fine, that works. There’s a candle on the table. The waitress is super nice about vegan choices. What’s not to love? It was busy but we didn’t have to wait long and the quirky decor is quite fun.