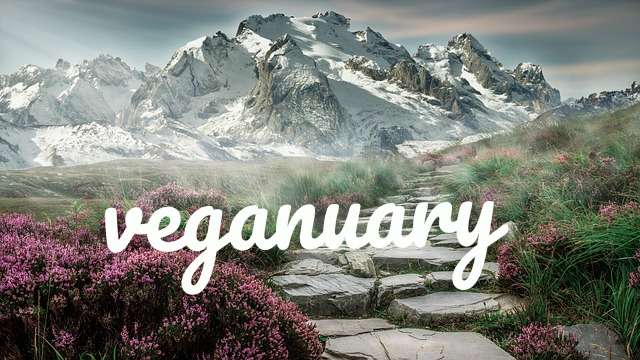 > Veganuary Day 4: 30 Days of Vegan to Save the Planet

Veganuary Day 4: 30 Days of Vegan to Save the Planet

This is Day 4 of Veganuary, my pledge to eat vegan during 30 days to save the planet. Today has been kinder than yesterday but I’m still to find the Aha vegan moment. I think I know why.

Another night, another good snooze. Veganism seems to agree with my sleep, which is a great plus. I beat the alarm clock to the wake-up call by 4 minutes and head to the pool for today’s swim training from 6.30 to 7.30am. It’s such a good session that I post it Twitter and head back home. Heading home for breakfast, you say? Nah.

You guys, I’m so relaxed about breakfast, that I deliberately wait until I get to the office before cracking on. I just stopped at home to pick up my bag (with breakfast in it) and walk my daughter to school (30 minutes), then bike to work (40 minutes). Anyone else would literally faint with hunger, but me? I’m such a tough cookie that I don’t spend the whole 40 minutes on my bicycle considering what I’m going to eat, how I’m going to eat it, what size of spoon or what color of bowl to use. Tough cookies don’t do that. Tough cookies ride on, their hair flapping in the wind (despite a steady drizzle), ignoring obvious physical signs of distress and not obsessing about the two bananas they could have gobbled up at home. Hey, I could stay this relaxed for at least another hour.

Truth is, I could eat a horse. Quick. Lock bicycle to lamppost. Hurry up stairs. Open front door. Put on the kettle on. Get the bloody breakfast items out of the bag. Breakfast is on. 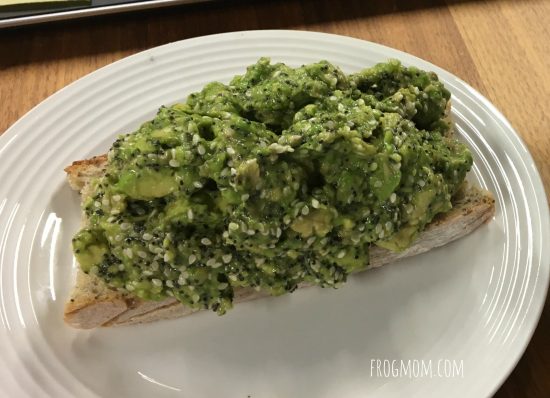 Sweet Jesus, about time! Because I’ve anticipated being super hungry, I’ve brought an avocado that I mash with sesame and poppy seeds + olive oil on toast. That’s supposed to be an appetizer while I am prepping Second Breakfast. 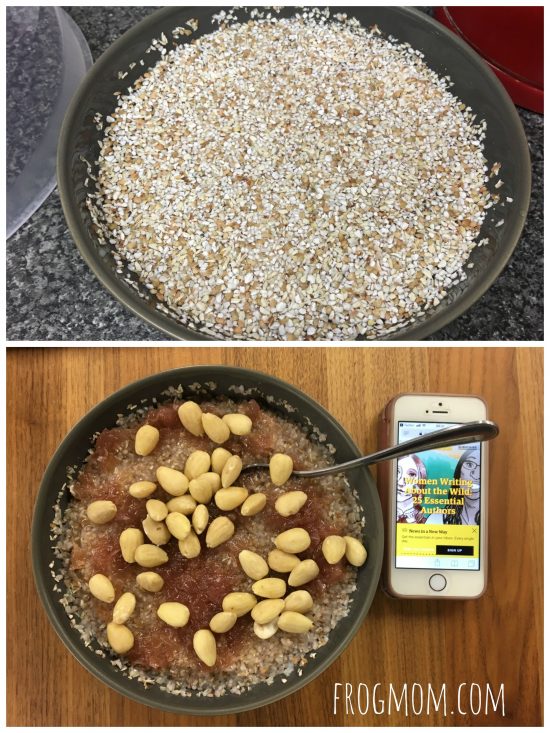 Now on Day 4, it’s time I boldly go where no French vegan blogger has gone before. I feel like a proper Trekkie. This is creamed buckwheat (Bob’s Red Mill) beamed in the microwave during 4 minutes, topped with rose petal jam and blanched Klingon almonds. This artsy before-and-after picture shows how 1/2 cup of creamed buckwheat goes poof in the microwave and becomes this gigantic mass of mystery porridge. I set my iPhone next to the bowl for comparison’s sakes. Yes, that’s a lot of food, esp considering it’s Second Breakfast. Would Captain Kirk approve? As he famously said to Scotty, “Sometimes a feeling is all we humans have to go on.” Let’s put it that way. I had a feeling this could be the next frontier of porridge. I tried. It may be the next frontier of buckwheat overdose instead.

Note to self: Waiting 90 minutes to eat breakfast after swim training is either nuts or bananas, but no tough cookie should have to do that ever again. Let’s not repeat the experiment.

Unsurprisingly, nothing to report. Not hungry. Over and out.

At 1pm, I’m still not hungry. My, buckwheat is filling. To work up an appetite, I join my colleague Lucinda for a gentle walk to the nearest running shoes store. On Day 3, I convinced her to sign up for a Tough Mudder, half distance. A Tough Mudder is some sort of obstacle course where people think it’s a good idea to crawl in the mud when it’s cold and rainy outside. It’s the epitome of badasserie for a lot of people. Of course, we have to invest in badass equipment such as… 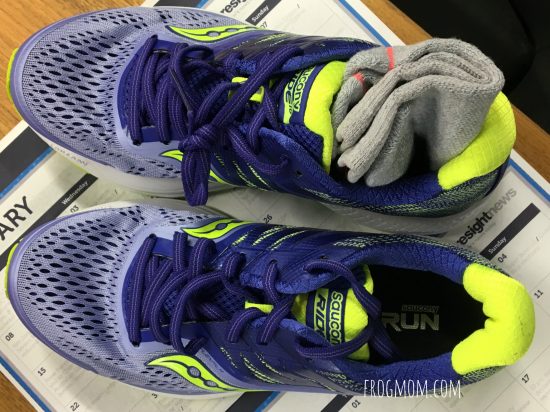 They are very comfy and I even run on a gait-measuring machine so that the store clerk tells me that I am slightly off-balance to the right side but given my low ambitions (I mention that we are not aiming for gold), I can settle on a “neutral shoe.” This is a pair of purple neutral shoes.

On the way back to the office, we stop by a Pret-a-Manger and I get this colorful salad. When I say “I get,” I really mean, I receive. Pret-a-Manger means very well and they label their food to go as Veggie or Vegan. This is helpful for people like me in January, but what happens when the label is wrong? When I ask for a confirmation that my first pick is vegan, the manager replies that the label is wrong. It’s only veggie. He then comes out from behind the counter, gives a run down of all vegan options (4 choices) and I pick this salad. As I’m about to pay, he refuses. “It’s on me,” he says. 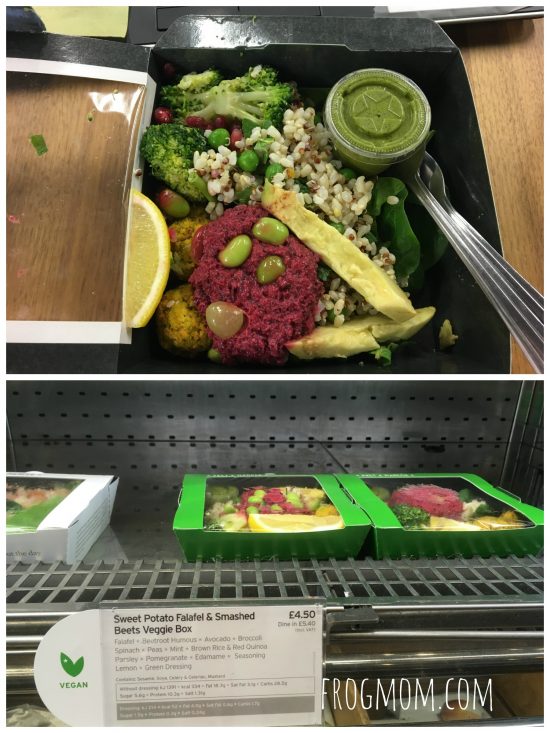 Tastewise, the salad is good, if a little bit on the sweet side. I’m now craving salt. French fries? Chips?

By sheer luck, my colleague Debbie has invested into a bag of salt & vinegar chips (UK translation: crisps). When she sees my desperate puppy look, she shares with me and the five chips I eat are oh-so satisfying.

After 40 minutes of uneventful cycling except the 10 bikes that almost run me down because I didn’t see a red light, I get home. More and more, Veganuary is becoming like a challenge to me. I’m counting days and I’m counting meals. I’m so conscious about the fact that diner follows lunch.

Lucky me, dinner is already in the kitchen, ready to be reheated. Last night, my husband cooked a lentil, ginger and cinnamon dahl and it’s waiting for us. 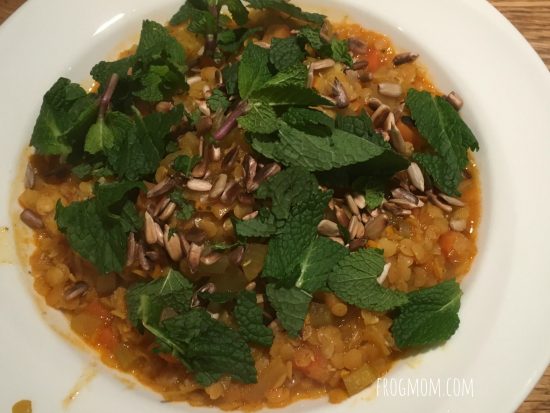 It’s from Maria Ella’s cookbook Modern Vegetarian and though it’s meant to be blitzed into a thick soup, I enjoy it chunky topped with fresh mint and toasted sunflower seeds. It’s really good, in fact.

Second day of tasty dinners. Are we getting the hang of it? 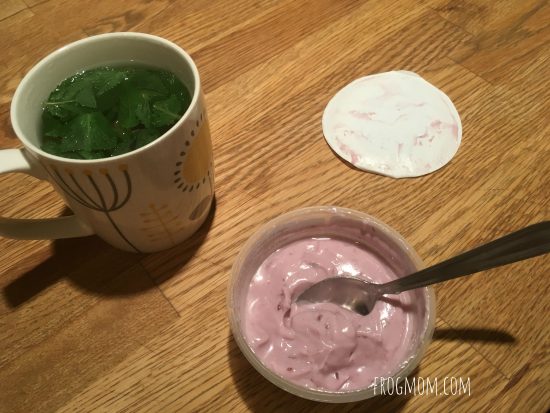 Because on Sunday I had a moment of shopping weakness, there’s a weird vegan yogurt in the fridge–almond milk with blueberries. Might as well eat it. And then, make a note never to buy it again. Why are dairy substitutes so goddam disappointing? Oh wait, that’s because they are substitutes.

In all this excitement, I almost forgot that there’s reason to celebrate.

It’s All About That Gas

I’ve got good news. No more non-stop farting! It’s now safe to get close to me without blocked sinuses.

A last question of the day from my friend Anne who’s supporting me morally from France and probably thinks I’m a living scientific experiment: how hard would it be to make it vegan and local?

Answer: Dear Anne, vegan and local would be great in California or in Spain in summer. In England in winter, say during Veganuary, it would be like living in the darkest Middle Ages. You would eat a lot of potatoes, turnips, cabbages, carrots, beets or leeks. In the fruit department, hardly anything grows during the winter season (OK, nothing) but you could eat last autumn’s apples and pears. Without citrus, you could kiss your Vitamin C bye-bye and say hello to scurvy. Forget your precious vegan nut butters too, unless you’ve blitzed all your nuts last summer and stored them in a cool cave somewhere.

Gosh. I almost forgot. Of course, you can eat vegan and local in England in January. Stinging nettles! Very high in Vitamin C and iron. There. And here I thought we were doomed.