> Veganuary Day 5: 30 Days of Vegan to Save the Planet

Veganuary Day 5: 30 Days of Vegan to Save the Planet

On Day 5 of Veganuary, the pledge to eat vegan during 30 days to save the planet, I’m finding a rhythm. I wouldn’t say that I’m finding it easy, but it’s easier for sure. Today ends on a Russian vegan dinner, something I would recommend to any cook looking for a change. I’ve included Mila’s Russian vegan Borscht recipe.

Another good night of sleep. I stayed up last night to finish writing Day 4 but I feel rested.

Unusually for me, I don’t have breakfast right away. I’m of these breakfast addicts who need their fix within 15 minutes of being up otherwise they start foaming around the mouth. Whatever I’ve had the night before, you can bet I’m excited for breakfast right after my shower.

Except not today. Veganuary, are you messing with my breakfast love?

I watch my 14-year-old eat Cheerios and still feel mildly excited about eating. It’s only an hour later when my 12-year-old is up, that breakfast happens. Finally. 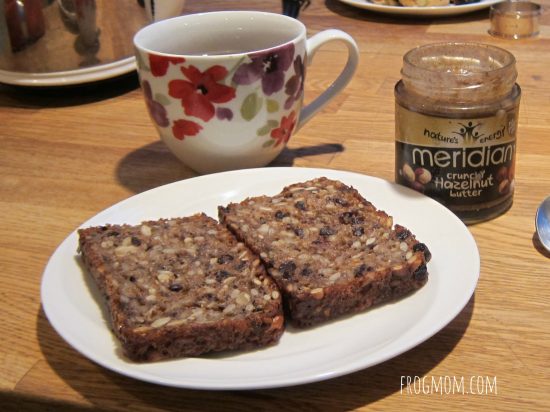 Ever tried nut butter? It’s basically any nuts crushed to paste consistency. The most famous is peanut butter but there’s cashew butter, almond butter, hazelnut butter, macadamia butter, you name it. I happen to have peanut butter (which I’m not a fan of) and hazelnut butter (brand new) in my pantry. Hazelnut butter is first. I spread it generously on a slice of Gail’s Danish spelt sourdough. This deliciously moist bread has raisins in it and I haven’t checked if it’s vegan but I pray to St Oaty that it is. 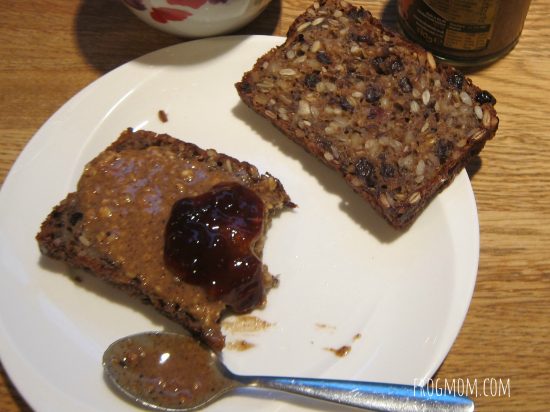 I bite into the first toast and I’m like – does it taste like cardboard or what? OK, I’m being unfair. It tastes like hazelnut cardboard. It’s dry! I need something else to improve the taste. Wild plum jam? Fortunately, I’ve got an open jar in the fridge and I know it’s vegan because my husband made it. It’s only foraged wild plums, sugar and slivered almonds.

OMG, big improvement. Except, I was too generous on hazelnut butter and it’s spilling all over my plate. Lesson learned: toast #2 and 3 are neat as can be. Thin layer of hazelnut butter + jam = decent replacement for butter + jam. Plus, it’s nourishing because…

No morning snack and no second breakfast!

I remember Veganuary Day 1 and the lunch leftovers I have in the fridge. I pop the kale in the oven to make it crispy again and get on the phone with my mom to catch up. Yes, the girls are doing fine. No, it’s not raining in London. Yes, I’m working from home today. 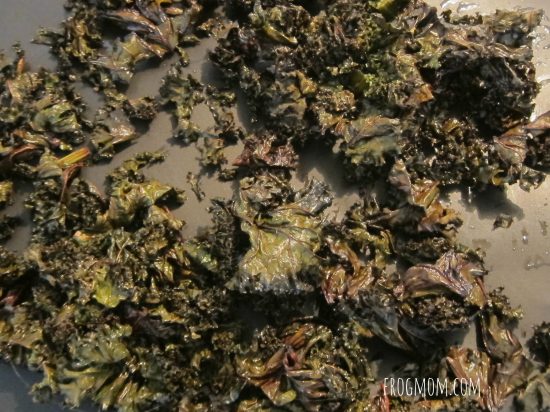 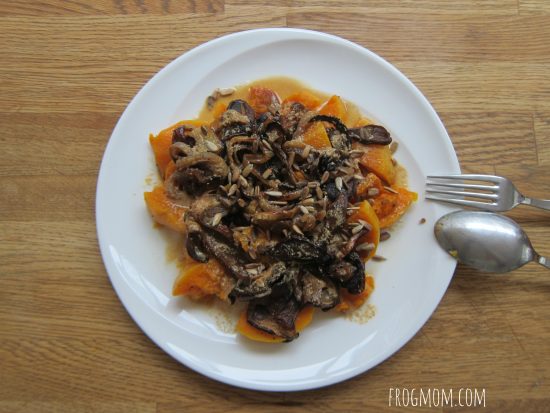 The colors are nice. It’s all mushy and lacks texture, but not bad. So much roasted/stewed veggies feels like airplane food though. How about something fresh to top this off? 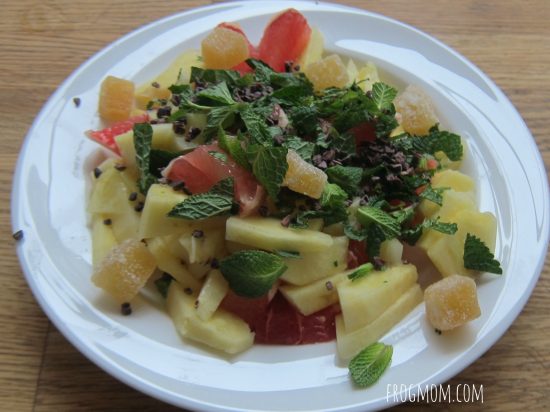 Around 3pm, I sneak into the kitchen and innocently sort my stash of chocolate bars. Got milk. Got milk. Got butter. Got milk. It’s a hard look at reality. Who knew so much dark chocolate had butter in it and I don’t mean cocoa butter? Aha, found you! 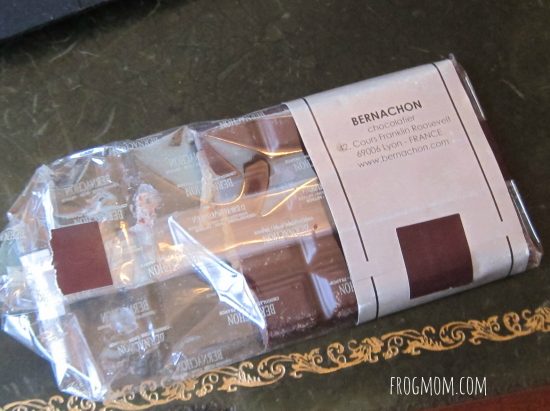 My friend Anne brought this bar of gourmet French chocolate in December and I had never read the ingredients list until today. Cocoa mass, sugar, cocoa butter, candied orange, glucose syrup, vanilla bean, soy lecithin. Am I the only one to think this qualifies as vegan? Since there’s nobody around to dispute my findings, I eat 2, OK 4, squares. Satisfyingly sweet, I needed that.

Tonight, we’re not cooking. Our friends Stefan and Mila invited us way back when Veganuary and dry January were not on our agenda. Right now they must be going, geez, thanks for the dietary requirements, you guys. However, as Celeste Barber says, challenge accepted! Not only accepted, but accepted Russian style. Mila is Russian and fortunately, she’s already friends with veggies (she only eats veggies, chicken and fish). Therefore, she treats us to a veritable feast. 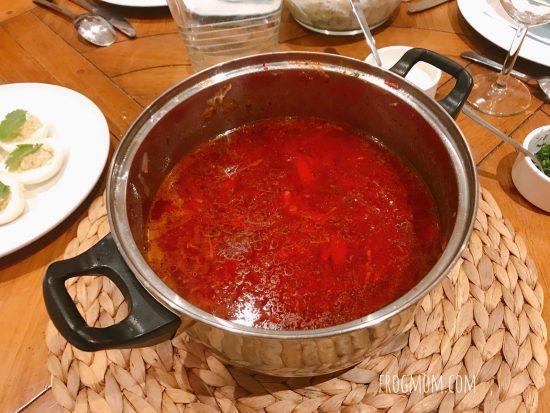 We start with a vegan borscht, a beetroot soup with potatoes and spices. This is the winter version, Mila explains, but did you know there was a summer version served cold with grated carrot, cucumber and sour cream? No, neither did I. Anyhoo. Comrade, this borscht is delicious! Here, let me have seconds. In fact, my youngest goes for seconds too, even though she’s not even a beetroot fan.

This is how Mila makes it, in her own words.

Quick recipe for borscht for 4-5 people: start boiling 3-4 potatoes cut in strips and meanwhile grate 4-5 boiled medium sized peeled beetroots and add them into the sauce pan where you stir-fry strips of red pepper in some sunflower or olive oil plus grated 2-3 cloves of fresh garlic. Then add a bit of tomato paste, squeeze 1/3 of a lemon. Then put everything from the sauce pan into the boiling potatoes soup, stir and boil until it is all almost ready. Add 1-2 bay leaf, add salt and black pepper to your taste. You can add fresh chopped dill to the dish when served or when cooking. Russians also add a tablespoon of sour cream to the dish when it is not too hot. Enjoy! 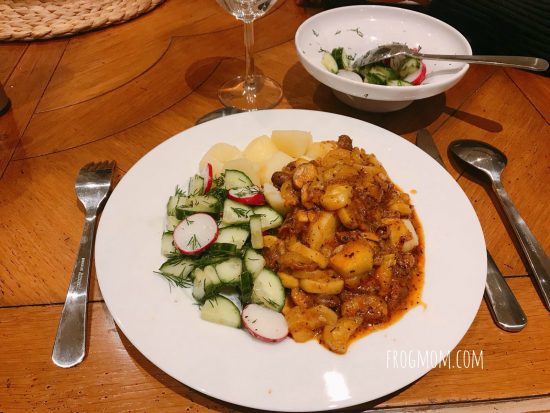 Main course is zucchini Stroganoff with boiled potatoes and cucumber and radish salad with dill. Oh, my Lord! I had never imagined that Beef Stroganoff could go vegan but it’s a total success. Mila explains that she’s only replaced the traditional cream with coconut milk and beef with zucchini. I can’t believe it’s that simple but maybe it is. Again, we finish everything and take seconds.

Are we going to roll out of here? It would be handy. They live in Hampstead and it’s all downhill to where we live. 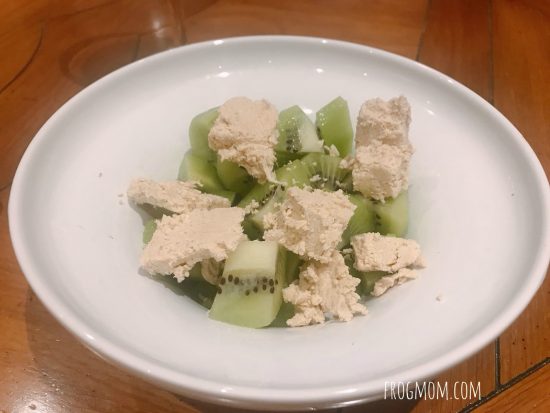 For more inspiration, here are a few Russian vegan recipes.