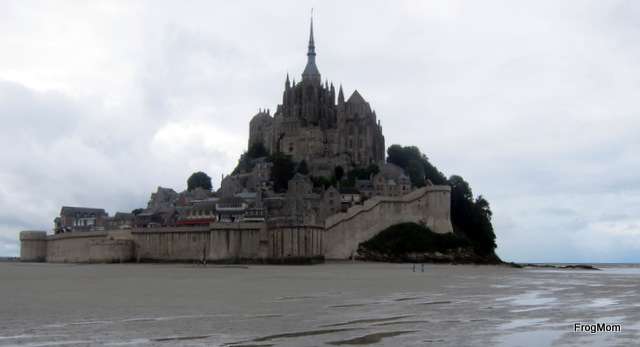 > Day Out in Normandy: Visit the Mont St Michel with Kids

Day Out in Normandy: Visit the Mont St Michel with Kids 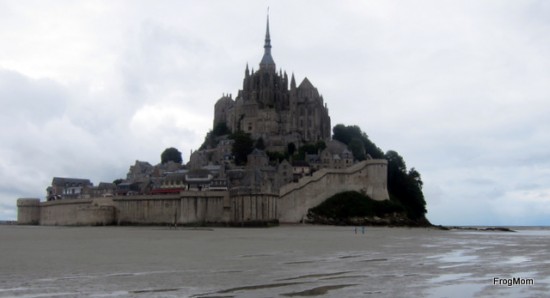 As I searched for the perfect angle to photograph the Mont St Michel at low tide, my shoes sank slowly in the mudflats of the bay. My two girls circled between puddles at the foot of the fortified walls. Seagulls surfed wind tunnels and disappeared over the sea. Travel with kids always brings about surprises and this was a perfect way to get a feel for the Mont St Michel.

Perched atop a tidal island rock, the Mont St Michel is the most visited monument in France outside of Paris. It used to be that pilgrims were the main visitors…in the 10th century. Back then, reaching the dramatic abbey was perilous business as many pilgrims got lost in the fog, were swept by tides rising as fast as a galloping horse, or ended up swallowed by quicksands. The three millions of yearly visitors have it easy today–parking lot, shuttle bus, causeway. Access may be easy, but the Mont is still as mysterious and breathtaking as ever. I took my girls to visit the iconic medieval island and here are things to do, where to eat and what to see.

By car: Gone are the days where the foot of the abbey was a giant parking lot sticking out like a sore thumb. The new parking lot is 2.5km/1.8 miles from the city and costs an arm and a leg.

By train: the closest train station is Pontorson, 9km away, and the station is 2 hours away by train from Paris. A shuttle bus rides between the station and the parking lot.

From the parking lot: most visitors hop on free shuttle buses but a few brave souls opt for the pilgrim approach, on foot. The 40-minute walk allows you to leave green Normand pastures behind and take in the island as it rises above the bay. It rained hard when we arrived so we hopped on the bus like wet devils, but I can see how a misty walk would set the scene perfectly for an atmospheric visit. Shuttle buses drop you 400m/1/4 mile from the walls.

Other: It’s worth noting that some local guides specialize in reaching the site like pilgrims used to, barefoot across the mudflats or riding horses across the bay at low tide.

The Mont St Michel refers to the medieval village wrapped around the central rock with spiraling narrow streets. However for most visitors, the real goal is the abbey at the top of the island and inside the abbey, the Gothic church masterpiece called the Great Wonder. On your way to the abbey, here are a few suggested stops. 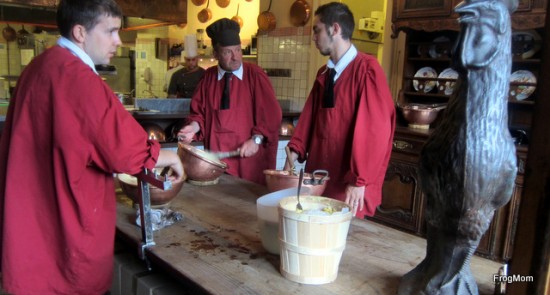 If you’re hungry upon arrival, try this. For a culinary experience steeped in history, the Auberge de La Mère Poulard is the iconic food stop of the city. The late Victorian establishment is a regular haunt for locals and its walls are plastered with autographed photos of celebrities. People order frothy “rare” omelets made with four eggs, beaten by hand in copper bowls and cooked in copper pans sizzling with melted salted butter over a wood fire. Rarely has a simple omelet reached cult status but this one has. The bad: the adult menu is very pricey and this will end up being your most expensive omelet ever. The good: children’s menus get the same size omelet and dessert as adults for 1/3 of the price. Bonus: it’s an interesting omelet, a tad on the salty side and very rich. Got to be hungry! This is how it looks on the plate. 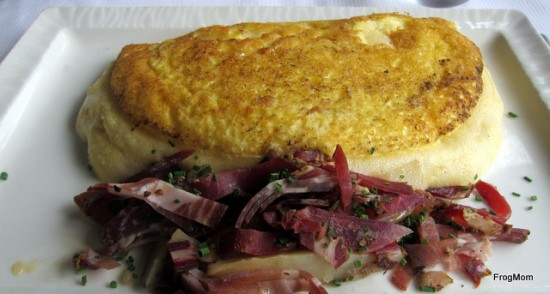 Consecrated to St Peter, this tiny 16th century parish church is located at the top of the stairs (left side) before the abbey and is still in operation. As you enter the church, you walk by a statue of the maiden Joan of Arc. It was the girl warrior who won the decisive 1429 Hundred Year War battle upon her white steed, as the Mont St Michel was the last Normand stronghold that hadn’t fallen to the English yet. It was also to her that the Archangel St Michael (St Michel) had appeared when she was only a shepherdess and told her to ride with the French king’s army against the English. You’ll see her in a guarding posture outside the church and as a fighting warrior in the interior chapel where people light votive candles. It’s a very peaceful place despite the bustle of the main street. 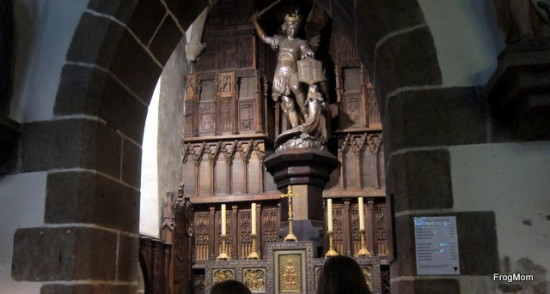 The narrow streets of the city

In full summer swing, the main street of the Mont St Michel is a sea of tourists and pilgrims. The day we visited was a slow day according to the tourist office. Even that was crowded! If you can, visit in the early hours and stay overnight to enjoy the narrow medieval streets, drawbridge and stone walls. If you can’t, go make your way and relax. The main street, lined with shops, is where you can find souvenirs such as typical “name” Bretons breakfast bowls, Bretons knits, pure butter galettes and postcards.

Try to stray away from the main drag and discover covered passageways, quiet courtyards and buildings that seemed to be piled on top of each other haphazardly. 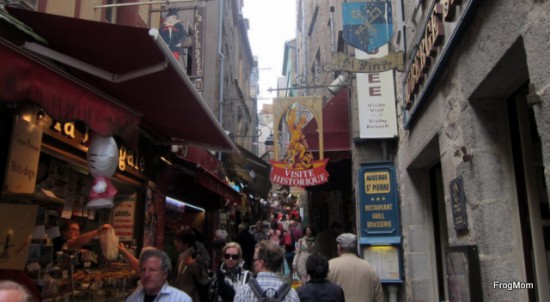 The Abbey and The Great Wonder

The higher you go on the island, the fewer people! You’ll have to earn the historic Abbaye du Mont St-Michel and climb 300 steps to reach its entrance at the top of the island. It’s a good healthy walk–with many spots where you can pause–and a reminder of the pilgrims’ way. Once inside the abbey, you feel inside a different century. Everything is so…medieval. 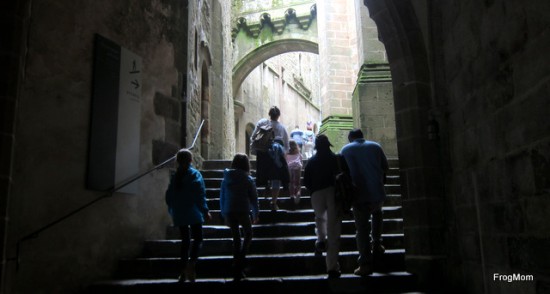 For prices and hours, click here. FYI, there is no specific child-friendly itinerary and the child audio-guides are reserved for groups. However, you can follow in our footsteps and the architecture of the place will fill in the gaps.

We decided to explore the abbey at our own pace and grabbed a free brochure (they come in many languages) to understand the main highlights of the visit. It started on a terrace overlooking the bay. The surroundings of the Mont St Michel are so flat that it was easy to understand how the Mont could be both an obvious pilgrimage destination and a fantastic military fortress.

Fascinated by the local legend of Tombelaine, we looked for the islet that bears the same name in the middle of the bay. According to folklore, Tombelaine was a fair maiden who escaped a giant enemy by hiding in a hole under a rock on the islet. The giant found her hideout and blocked the entrance with a stone. At tides rose, Tombelaine howled in the wind. People say you can still hear her voice carried by winds when the tide rises. Granted, it’s not very cheerful but the Mont is not Disneyland. It’s a place that inspires awe and respect. On that note, you’ll find many “silent” signs throughout the visit. As the Mont is a place of worship and pilgrimage, it’s best to keep voices down. 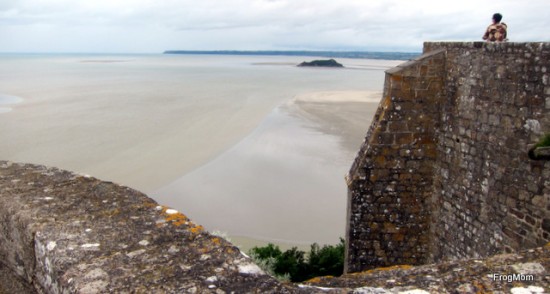 Further along, we entered The Great Wonder also known as abbatiale in French. Having read Ken Follet’s Pillars of the Earth, I couldn’t resist marveling at the tall and elegant nave and thinking about the flamboyant Gothic cathedral built in the book. It’s a beautiful sight. Escaping the crowds, we proceeded to the back of the Wonder where a chapel caught our eye. With a model ship hanging from the ceiling, the chapel offered two wooden seats for pilgrims and we stayed a while, wondering about the many sailors honored in this chapel. 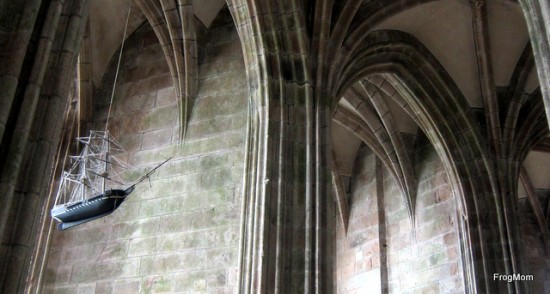 From the abbatiale, it’s only a few steps to the cloyster (awesome bay window on the bay), on the dining room (you can’t see any side windows from the entrance as they’re set back inside the walls), the aumonerie and onwards to many more rooms, each more magnificent than the previous one. Our favorite was the Salle des Chevaliers (Knights Room), a vast room with gigantic fireplaces, cross-vaulted ceiling and granite columns. Standing inside one of the fireplaces, we craned our necks to look up the chimney and see the sky. Oh, how impressive log fires must have been on dark winter nights. No wonder the Mont inspired such devotion. 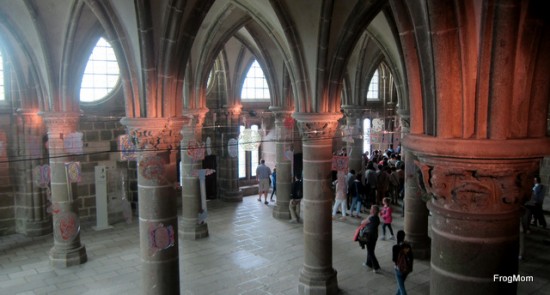 The Salle des Chevaliers concluded our visit of the abbey–with a compulsory stop at the shop, where we stocked up on medieval kids’ novels and games. Out in the open air, a fine drizzle gave a shiny glaze to cobblestone steps leading out through the gardens. Following a sea of umbrellas, we made our way down the island and I stopped at the tourist office to inquire about exploring the mudflats.

The woman gazed at my girls: “Don’t do it with children! Just last week, we rescued a tourist trapped in quicksand. It’s way more dangerous than it looks.” But, I said, we saw groups of people out on the mudflats from the terraces. She confirmed that lots of people do it because it looks so safe, but the bay at low tide is in fact very dangerous and it was her duty to advise us against it. The only way to do it is, like in the Middle Ages, to join a guided tour with locals who know their quicksands. Indeed, people are rescued in the bay every day. The warning sign outside the city features an impressive list of risks for mudflat trespassers: drowning, quicksands, disorientation in heavy fog, tides, etc.

That’s the bit where I write: don’t do it.

However, being contrarian by nature, I decided to take a limited chance and step out a few meters to take a picture. Just a few meters, just one picture. By gazing at the compacted sand, we could choose a path where our feet didn’t sink in mud puddles. My girls started circling on the mudflats like sea birds. The sun peeked a few seconds from dark clouds and hid again.

And I got lucky with puddles. 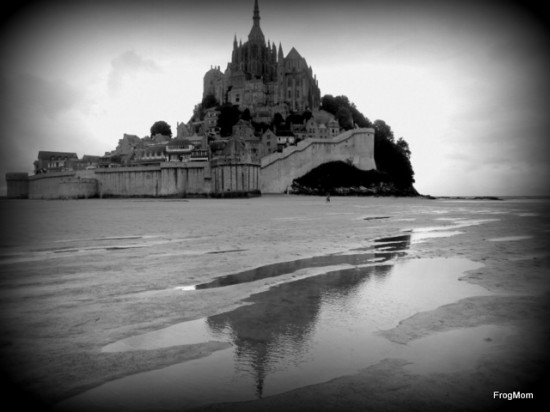 I hope you enjoy your visit to the Mont St Michel!