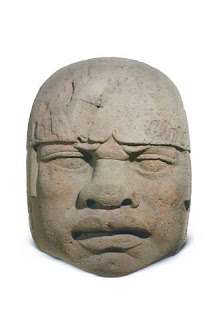 > Visit the Olmec Exhibition at the De Young Museum

Visit the Olmec Exhibition at the De Young Museum

The masterpiece of the Olmec Exhibition at the De Young Museum in the Golden Gate Park is Colossal Head 5 – 13,000 pounds of solid volcanic basalt carved by hand between 1200 and 900 BC. Visiting this exhibition with children is a fantastic way to introduce them to lost civilizations, a romantic and fair view of what happened to the mother culture of Mesoamerica.

Way before the Mayas and the Aztec, the Olmec civilization developed a complex society, invented a writing system, farmed the land, and learned to extract latex from the rubber tree. Olmec means “rubber people” in Nahuatl, the language of the Aztec. Then for unknown reasons, the Olmecs vanished into thin air. Pfft, gone. With mysteries worth an Indiana Jones movie or two, the Olmecs are a kid’s riddle dream. I took my girls and they came out fascinated and puzzled. Who were these people?

“No, we are not going to see real Olmecs, they are already dead” was the first thing I heard as we faced the Colossal Head 5 at the entrance. That was a grandmother taking her toddler grandson around the sculptures. It’s important that kids understand that they are viewing a slice of history and one we don’t know much about. If you expect big paintings showing daily life with the Olmecs or wax figures dressed with feather tops and pectorals, you’ll be disappointed.

The exhibition displays mostly sculptures, with the exception of a few ceramics, and can be a bit dry on the “alive and kicking” aspect. What we did with my husband – and the wandering grandmother did the same – was read the labels first, then translate them in kid-friendly terms to the children. In most cases, this was easy because the art is so figurative and creative.

Take this zoomorphic figure shaped like an opossum. “Look mom, a pig!” exclaimed my kindergartner. Precisely what I like to hear. She certainly didn’t get the animal right but to her -and to the little toddler grandson too – it looked like a pig and she could relate to it. “It’s cute, I like it,” she added.

The displays in the opening rooms include a few of these sculptures representing fish or birds and it’s fun just to walk around and ask children what they think it is. Since the animals are easy to recognize, that gives you a good opportunity to speak about wildlife at the time of the Olmecs. I wish the interpretive panels included more explanation about the Olmecs’ daily life and how the sculptures may have been used, but if you take the audioguide (which I didn’t), it probably gives you more background.

As you progress, you’ll see that the Olmecs mixed human and animal creatures from land and sea to create supernatural beings. A greenstone pectoral reminded me of the tiki jade pendants from New Zealand, with its oversized head and thick lips.

When my girls recognized a serpentine statue as a baby, they both both pointed to it like they were in familiar territory. Olmecs babies were like ours – good, now we can rule out the outer-space theory. A baby figure holding a ball confirmed the feeling and we moved on to a room that shows how ceremonial axes were buried in dirt chambers and how they were excavated. That part didn’t resonate as much with the young ones, though I loved getting a sense of where the artifacts were discovered.

Actually that room did drive a point home with my girls. In the following room we saw a half-kneeling figure with high-waited belt and bands below the knee. I think the label indicated it was excavated. “They made this and then they hid it, why?” asked my kindergartner. Good point – why were the figures buried?

Nobody knows for sure and that’s part of the excitement. Discovering the Olmecs has been a huge archeological work in progress since the 19th century when a Mexican farmer found the first head in his field – and probably freaked out at the enormity of the head. For the anecdote, David Hatcher Childress, considered by many to be the real life Indiana Jones, wrote about the Olmecs as the greatest mystery of North America. So here, mystery and more mystery to come.

The next display proved to be another puzzle. This group of standing figures surrounding a leader and celts was buried in white sand. “They look like surfboards,” said a guy next to me, and I could see his point.

This was the only display that showed a group of people engaged in an activity and as such, captivated my kids’ much like a doll or figure display would. It was a scene and scenes speak to a child’s imagination.

Advancing we reached a standing figure called Monument 19 which my 2nd grader called the headless horseman. Two seconds later, my kindergartner exclaimed “But mom, it’s broken!” Ha ha moment. What, the museum didn’t glue the pieces back? It was fun to see the indignation and to explain how old the pieces were – that some had been intentionally broken by people and that we were lucky we found any of the sculptures at all.

The sculpture that inspired the best comments was a contortionist in an extremely flexible position with feet on his head. My oldest said “I can do that!” and I barely stopped her before she got on the ground to wrap her feet around her head. “It’s the basket position, we do that at school,” said the youngest. Their reaction showed, once again, that they could relate to a pretzel-yogi guy past the rock barrier and the centuries.

In the last room, roller seals looking like carved rolling pins inspired a little chat on whether or not the Olmecs could write (apparently they did) and how my kids thought this seal could be used to mark a document.

The cherry on the cake came in the form of a History Channel documentary that made me cringe at times but which showed the lands where the Olmecs originated, and included archeologists and museum curators interviews. My girls watched it twice and particularly enjoyed the images where Mexicans are dressed as ancient Olmecs (but then, it confused them too because they asked me if they were still alive. Sigh) For a less simplistic view on the Olmecs, the BBC featured a series of 5 episodes called “Secrets of the Ancients.”

One sentence in the movie summarized the Olmec mystery pretty well and stuck with me “We just don’t know.” A fitting conclusion to a Sherlock Holmes incursion in time. Why don’t you take your kids to the exhibition and find out? Kids have their own way to approach ancient art, whether or not we adults know anything at all about it. Reward them with tarts or chocolate mousse at the De Young Cafe and call it a day.