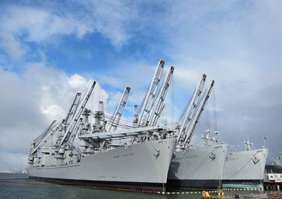 The USS Hornet is a ship museum anchored in the East Bay city of Alameda and makes for an amazing family day trip. Only 30 minutes from downtown San Francisco, Alameda feels a world away from the bustling city. It’s an island after all and it has that peculiar island charm. You get out of the Victorian downtown, drive through dilapidated 1950s projects, and after a left turn, discover a former navy air station where the MARAD‘s Ready Reserve ships are berthed and ready to supply equipment and vehicles for US military operations worldwide. Docks with restricted perimeters. Guys in uniforms driving big grey vehicles around. And the USS Hornet, an aircraft carrier open to the public. 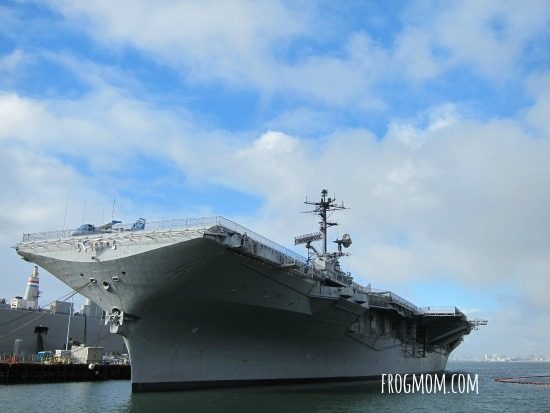 Getting to the USS Hornet

One Sunday morning we stumbled upon the signs for the USS Hornet from I-880 towards Alameda, en route to the Bay Area International Children’s Film Festival. We were early for our movie so I suggested we go check out the docks. That’s how we found out about the USS Hornet. Pure chance. Boy scouts were pouring out of the ship carrying sleeping bags and rucksacks. I checked the sign: “Open daily 10am to 5pm.” That’s all the info we needed.

We thought visiting this U.S. navy ship turned into a museum would keep us busy two hours. Boy were we wrong. I mean, look at the size of this thing! In over 3 hours, we barely scratched the surface of everything this ship museum has to offer–three decks of a ship as big as a small village, miles of giant pipes and narrow passageways, rooms full of torpedoes, hundreds of feet of ladders, ghost haunts and space shuttles landed at sea.  I’ll say, it was a tad surrealistic and much more than what we expected. Obviously, we all loved it.

On the Docks at Alameda Point

On the docks at Alameda Point, I was dwarfed right away – esp when I saw the plane on the flight deck and estimated how high it was. Then I heard my girls: “Mom, can we go inside now?!!” Sure you can, baby, it’s a museum. Come on and mind the ropes and steep stairs – we’re not on a  Disney cruise liner. This floating museum will keep you on your toes with a fascinating history that covers dark times of war, an  Apollo 11 recovery mission, and more machinery than an aspiring engineer can handle. 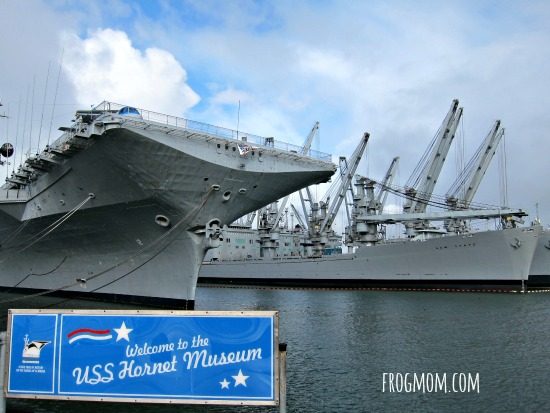 We stepped onto the gangplank that connects the docks and the USS Hornet and entered the hangar deck. Again, we felt rather tiny – the ship is 893 feet long – sort of like we were standing on an airport runway, except now there was a gift shop, a flight simulator, a dozen aircraft and ladders everywhere. Where could we start? First we bought our tickets. They’re not cheap (see details at end of post) but think of them as tickets to a 3-hour long movie with period music and director commentary. 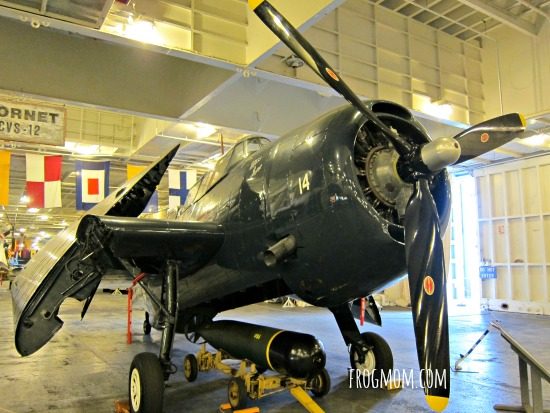 A docent whisked us right away to a TV presentation of the ship by the orientation area. My girls looked in awe at the docent in his uniform. Not his docent uniform. His real navy uniform. Docents on the USS Hornet are army veterans, many served on the USS Hornet. Their jacket may be too tight and their hair on the grey side, but their history is an open book into the past 60 years of US Navy warcraft overseas. How incredibly valuable, I loved it.

Next to the orientation area hung a giant panel with hundreds of miniature planes and ships. “That’s the combat record of the USS Hornet,” he said. In 18 months of combat, the USS Hornet shot down 668 Japanese planes, destroyed 742 Japanese planes on the ground, sunk or heavily damaged 1,269,710 tons of enemy ships (73 ships sunk, 37 probable, 413 damaged). “It’s like that battleship game I like to play!” exclaimed my 7-year old. Yes kiddo, except these were for real. She looked at the docent but I could tell. It was way beyond her imagination.

The docent then asked us what we wanted to see. Blank. Technically you can visit the ship on a self-guided basis but docents are here to assist. And if there aren’t too many people, you can pretty much ask to see what you want. Let me show you how kid-friendly the docents are. The docent in front of us looked at my girls and said, “Would you like to see the captain’s quarters?” They nodded frantically at the word “captain”. I was impressed. This venerable guy in his uniform understood that to get the family to enjoy the ship, he needed to address the kids – not us, the oldies. That’s what I call “understanding your audience.” 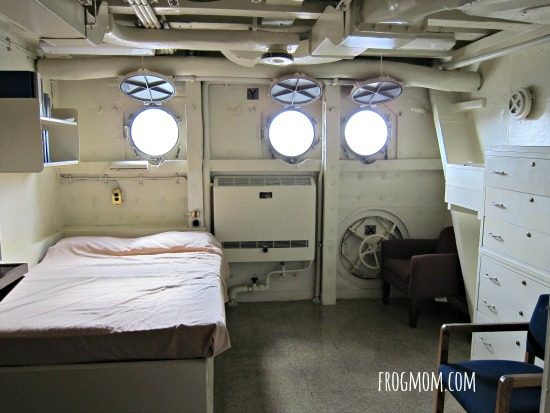 “Hey Chad!” He hailed a docent to guide us to the captain’s quarters. Our docent Chad was the son and grandson of army veterans (pilots, if I remember well) and a US marine himself. He introduced himself, his family history, and led us up the steep captain’s ladder to the captain’s dining room, and the captain’s bedroom. As you can see on the photo, it’s got ocean views, furniture, and a double bed. Nice hey? Wait til you see the dorms, you’ll think it’s royal.

Emergency Station on the USS Hornet 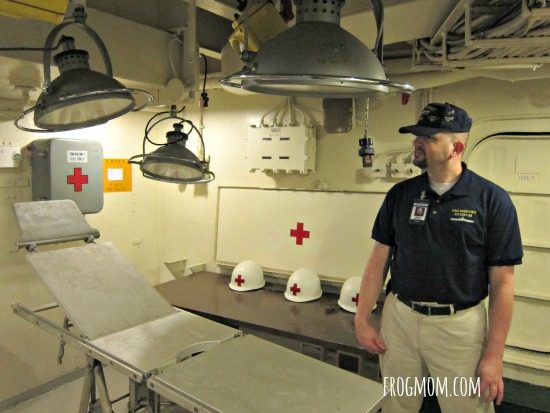 On the same level were the quarters of the admiral and the XO, as well an “emergency station” that gave us a feel for war times. “What is it for? asked my girls. Chad switched on the light and explained that in case of emergency intervention, you had to be able to operate anywhere on the ship. There were several of these peppered throughout the ship, including some in hallways.

Back to the hangar deck, we added five people to our group and proceeded up more ladders to the second deck to learn how 15 men operated a big 5-inch gun, and the different types of shells that were fired from the guns. 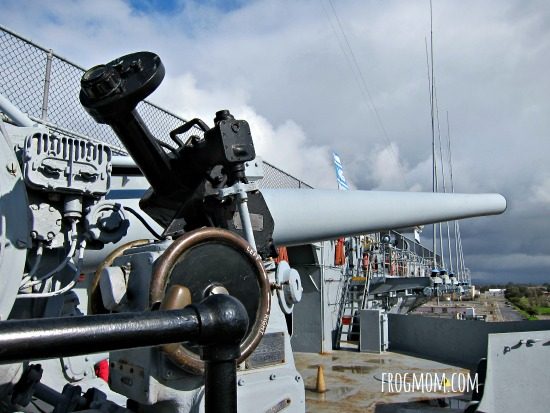 Interestingly enough, the ammunition was color-coded to indicate the primary use of ammunition, the presence of a hazardous (explosive, flammable, irritant or toxic) filler, and of color of tracers, dye loads and signals. We each tried to hold one, children first, but these babies were darned heavy and none of us succeeded without puffing.

Next, the focsle and the 1,100 feet long chains of the anchors weighing 108,000 pounds. These chains are the kind you don’t want to drop on your feet or release by mistake. Once they’re going down, it’s not easy holding them back. Our girls tried to lift them a 16th of an inch above the floor but of course, the chains didn’t budge. I couldn’t either. OK, they were as high as my knee and thick as my thighs. They were perhaps the most impressive item on the ship, apart from the crew berthing and the catapult room.

By then, I had lost all my bearings and even with the map in hand, I was glad to follow Chad wherever he took us. This ship is a maze. No wonder the “Flashlight tours” are so popular. Take a bunch of brave souls, switch off the lights and guide them through special rooms or better yet – let them explore dark tunnels by themselves. Spooky! 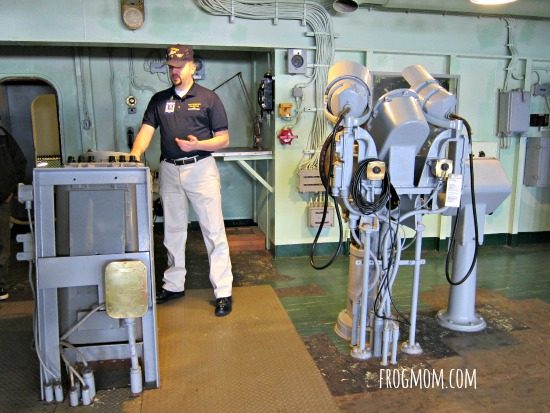 We stopped by the navigation room but my girls were getting distracted and I spent more time quieting them then listening to the fineries of ship radios and compasses.

Living on the USS Hornet

Fortunately, the crew berthing rekindled the kids’ interest in the tour. Rows of beds, piled four high on top of each other, the most superior rank getting the higher levels, the lower sleeping way at the bottom. That’s where school trips, boy scouts or girls scouts spend overnights. My girls were skeptical when I suggested we participate in the monthly family overnights on the USS Hornet, the Live Aboard Program. They wanted to see the bathrooms and the kitchen first. Fine, off we go, with a few detours. 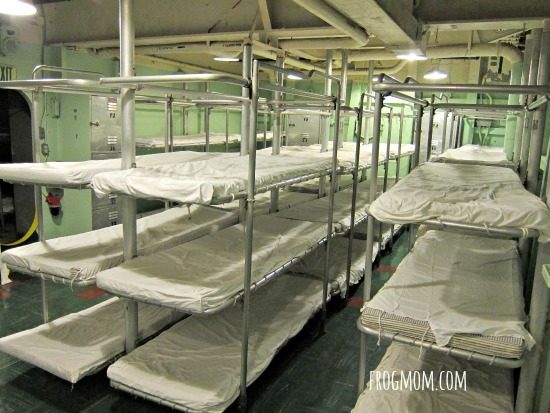 The Most Dangerous Place on the USS Hornet

From sleeping quarters and fighting weapons, Chad led us in the deep underbelly of the ship to the Catapult Room, a fascinating room tainted with  hauntings in the form of a sudden decapitations. 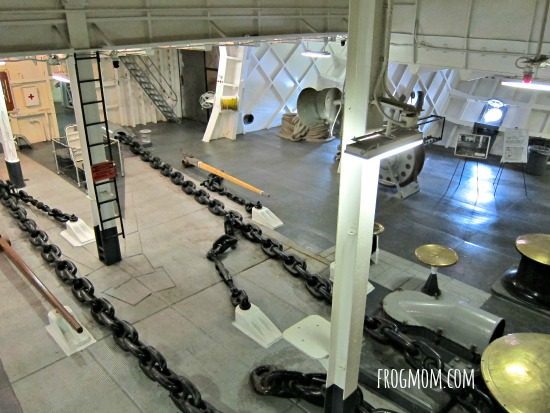 This room was the main room used to launch planes on the flight deck and provide them with enough speed that they’d fly off the runway into the air – not drop with inertia into the sea. You see, the Catapult was a very powerful hydraulic machine used to “catapult” the planes off the flight deck, helping them lift-off with a complex system of hooks, cables and wires to launch departing planes.

Because of the tendency of the main wire to snap, the Catapult was considered one of the most dangerous places aboard an aircraft carrier. When it snapped, it spinned around the room, slicing through anything in its path. Axes and guillotine are so old school! On a more cheerful note, the Catapult Room is home to a few air tanks named after the crew’s favorite drinks! Those were the days…

Eating on the USS Hornet

On our way out of the Catapult Room, we visited the auxiliary generator and a torpedo room, both with supersized machines, overhead pipe work and shiny metallic armors. I was excited but my girls not, they were getting hungry. Which is why the next stop at the ship’s bakery filed them with hopes of scrumptious snacks. They dreamed away in front of the oversized bread slicing machine, the ovens where you could bake dozens of loaves at a time, and the mixing bowls as big as bath tubs. Too bad the display bread loaf was pure painted resin.

Not far from the bakery, the laundry room offered a humorous insight in the 3 quality levels of laundry, the higher-ranked officers getting smooth settings leaving shirt buttons unscathed while lesser-ranked crew got the savage shirt treatment crushing anything thicker than fabric, starting with buttons. 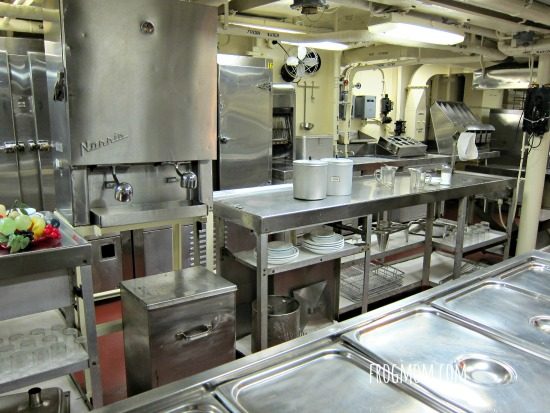 Now, the kitchen was typical of any industrial kitchen but I liked the fact that it was sandwiched between two  lines, allowing for faster serving of the 3,000 meals a day (I don’t recall the exact figure but it was in the thousands. The rows of trays neatly arranged in the hallway preceding the kitchen had us ponder for a second before we realized they were dining trays.

Chad gave us the recipe of the USS Hornet “rainbow ham,” a delicacy I do not suggest anyone try at home unless you want to get rid of unwanted guests. Hams were purchased in wholesale quantities and frozen in the large cold chambers of the ship. When needed, they were taken out of the freezer, boiled, sliced, served and whatever remained was frozen again. Hence the “rainbow” coloration of the varying layers of the frozen-refrozen ham. In the same frozen idea, the ship’s ice cream shop wasn’t far from the kitchen and had my girls drool.

Using the “Facilities” on the USS Hornet

Just then, one of them needed to use the bathroom. We were going to see the bathrooms! In typical army fashion, the showers and toilets were shared compartments without doors or much privacy. Rest assured that your family overnight will be less authentic though. Showers now have curtains for overnight guests, and some toilets too. 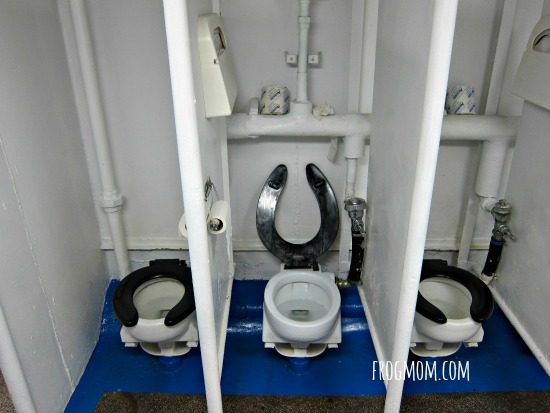 On this note, we decided it was time to go for a snack. That left us with only one option: we’d need to return to see the engine room, the combat information center, the bridge, the surgery room, the dental station and all the other rooms we hadn’t had time to visit during 3 hours. Phew, what a ship!