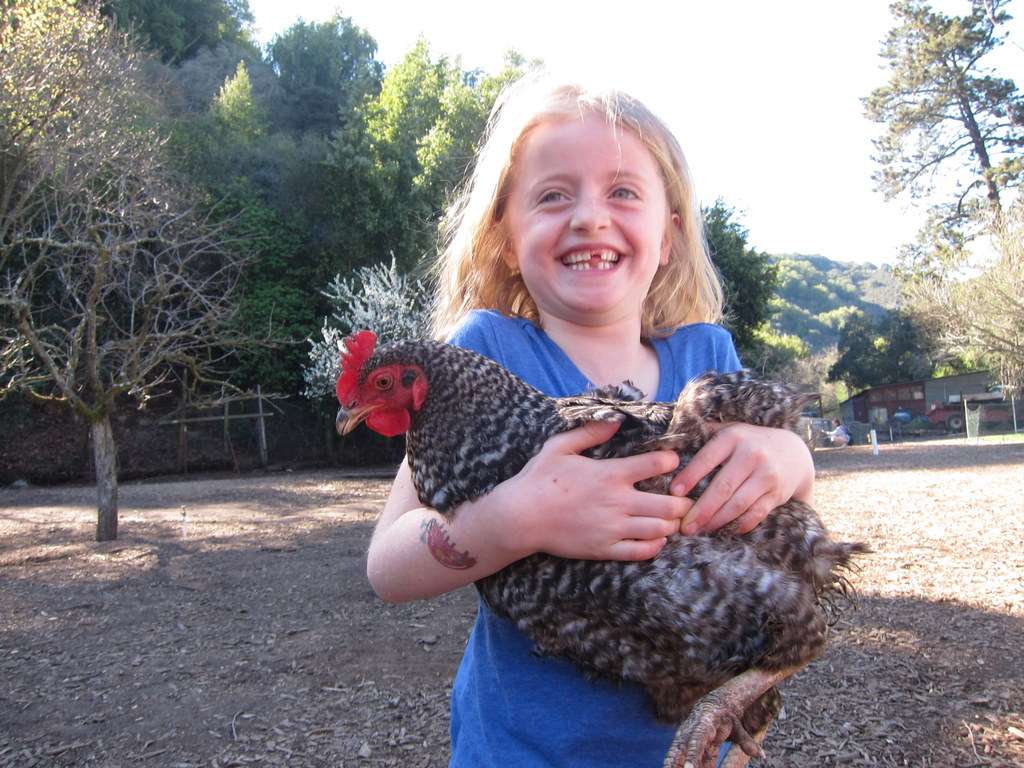 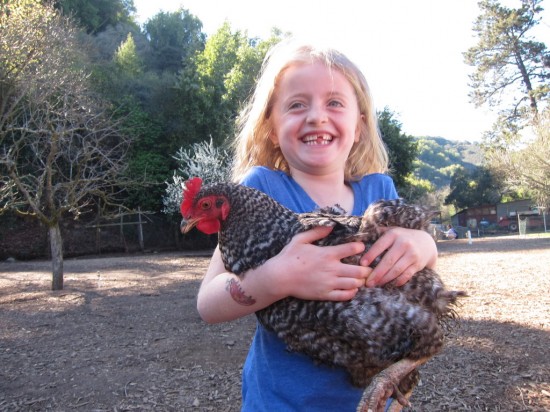 Nestled in the foothills of Los Altos Hills, Hidden Villa is a rare breed in the Bay Area: an educational farm with a pizza garden, kid workshops in a Craftsman house, big healthy pigs like in books, a fake horse in a Victorian barn, adult alcoholized classes, a produce/egg booth at the entrance, a swimming pool for summer camps, a hostel and miles of trails. Until recently, I thought of Hidden Villa as a hippie commune where interns sheer the sheep to dye the wool and knit funky scarves while drinking chai. In a few words, I was not impressed by the farm and much preferred the dramatic backdrop of Slide Ranch with its view on the Pacific Ocean. On the three or four occasions I had visited Hidden Villa before, I had found the land to be dry and had not explored the trails. It was time to start on a clean slate and do a better job. I realize now the farm is as heaven for chicken-loving kids or those who enjoy splashing around in the shallow creek by the bridge. It is also, I now know from experience, a great place to sign up two kids at a farm class while you go hike the backcountry. Here’s to Hidden Villa!

I needed an excuse to go to Hidden Villa and signed up my girls for a Little Red Hen baking class. They were thrilled and looking forward to gathering eggs in the chicken coop and churning butter. To make a playdate of a day out, we enlisted a childhood friend of my girls who’s the tallest 8-year old boy I know. He was going to be my farm pal during the class. Around 2pm I pulled in and paid my parking fee at the entrance booth. At the same time,  I asked about the box of eggs. Yes, you can pay your parking dues and buy eggs in the same transaction. A few days later, I can confirm they were delicious and I’m happy I grabbed my 12 Pullet eggs.

Being early for the class, the four of us decided to explore the farm.

This was our first stop and while my girls don’t get over-excited by the chart of plants that grow this month, they do get excited by the tunnel that connects the garden to the trail. It’s a cute tunnel for kids and once inside, you can find three or four outdoors “kid play rooms” with child-size wood furniture under a canopy of vines or trees. The Pizza Bed is a cute idea, that’s an herb bed where traditional pizza herbs grow – basil, oregano and the such. In March though, it looks a bit sad. On we went. “Let’s go see the chickens!” I offered.

Who knew the chicken area could be so much fun? The first thing we saw as we entered was a pair of preschool-age girls parading around with chickens in their arms. When I write parading, I mean parading. They were walking towards their folks to show off the volatile and release it before trying to catch another one. At that point I asked to a parent “Are the kids allowed to carry chickens?” To which I got a loud “Yes” with a few pointers. To play Grab-the-Chicken, you need to follow these rules:

Immediately my girls and our friend started walking behind chickens but the chickens outsmarted them and got to the coop before being swept away. I observed the little preschoolers who kept scoring more chickens and realized there was method to their candidness. First they approached the chicken without hurry. Then they bent over and firmly held the tail. Last the scooped up the chicken.

Thus informed, I gathered my crew and told them about the technique. I even put down my bag and volunteered to demonstrate – with success! After their first chicken (which they wouldn’t let go during 20 minutes), they spent another half hour scooping up chickens and complementing each other on their catch. Right before class started, they were all asking about backyard chickens and how chickens as pets would be so awesome.

This was a kid-only workshop so I did not get to participate but I got to listen to the narrative and taste the results. In a couple hours, six kids ages 8 and above went to the chicken coop to collect some eggs, churned butter out of heavy cream and grated orange rinds to bake an orange pound cake from scratch. Pretty cool to be able to source two ingredients directly from the organic farm. The best parts for me was that the cooking workshops take place in the Duveneck House, a beautiful Arts & Crafts house and that the cakes were baked in Mason jars, thus easy to transport home. The kids decorated paper bags to place their cakes in jars and by the time I picked them up, they were already enquiring about summer camps.

So how did I kill a couple hours? Surprise surprise. During the baking workshop, I went hiking with my little friend.

Ironically, we didn’t set out to hike. Initially I didn’t want to scare off my girls’ friend because I knew the “H” word made him cringe. His mom had warned me he might not want to hike at all. All right, I want everybody to be happy. Instead, I suggested we go check out the sheep. And the goats. And the white barn. Oh look, there’s a trailhead! What does it say? Creek trail, hmm hmm, why don’t we see what’s out there?

And before we knew it, I had a third-grader for a hiking partner. It helped that we found some cool spring flowers along the way. Beautiful trillium by the creek and Indian warrior on the hill side. Some funky tree shrooms too. Our 2.3 mile hike went as follows: get on Creek Trail from the barn, make a left on Grapevine Trail (steep climb, gorgeous views on the valleys), make another left on Hostel Trail at the ridge (look for clearing at highest point, it’s Elephant Mountain) and follow Hostel Trail all the way down to the farm and hostel. We completed the hike in just over an hour and twenty minutes and stopped many times along the way to look at plants or the landscape.

In the end, my young hiking partner was very happy (I think) and I, very proud of him because I know it’s usually not his gig. He hiked the 1200 eet of elevation without a simple complaint. Isn’t life beautiful?

Last Surprise and Then We’re Off

At the end of the day, I picked up my girls, their pound cakes and was ready to get back to the car. “No mom, we want to show you something first!” said my 8-year old pulling my sleeve. She whispered a question in her class teacher’s ear, got directions and took me over a bridge and past a green pond. “Close your eyes and open your mouth,” she directed. Oh goodie, not stinging nettle, please. Phew! It was miners lettuce and tasted like a green leafy lettuce. My girls have always had a soft spot in their heart for miners lettuce and we were standing in a (small) field of miners lettuce. Imagine the delight.

On that note, we really did go back to the car. At 5.30pm, we were practically the last visitors on the farm. The parking, which was full when we arrived at 2pm, was now empty. Thanks Hidden Villa, I now plan to explore more trails and do your backcountry justice!